Back to My Roots 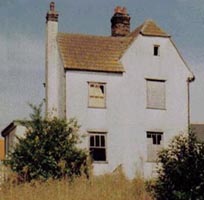 "There was no-one home, except for the spirits of my ancestors."

When I started to trace my family tree in 1992 I had no idea that, over 12 years previously, I had moved back to my roots. I was fortunate that my ancestors mainly originate from Essex and finding them in the B.M.D indexes and Census was relatively straightforward.

I found out quite early on that my Gt. Grandfather was born at Clap Bridge Farm, Bocking, Braintree, Essex in 1874, (even though I’d been told he was born in London).

"Now I understood why she had called it the Hammer House of Horror."

In those days finding people on Census Records, for me, meant a trip to the Chelmsford Record Office, Colchester Library, or the Mormon’s History Centre in Ipswich. All within ¾ hour drive.

I had an overwhelming feeling to find out more about the farm. I telephoned Braintree council to find out if they knew where I could get some information and if they had any maps or photographs.

I couldn’t believe my luck. The gentleman I spoke to told me that Clap Bridge Farmhouse was still standing but they were building on the land.

I was so excited about this news and thought there was no time to lose before I went to see it.

The gentleman was really helpful and promised to send me a couple of recent maps of the area. He had marked the spot where he thought the location of Clap Bridge Farm was.

Armed with the maps, I went searching for the farmhouse. Unfortunately there had been a By-pass in 1984 on part of the land to the front of the Farmhouse. Then in 1986 Byant Homes built houses on the land surrounding the Farmhouse. This had altered the landscape beyond recognition.

I spent hours searching, around and around, walking past the same houses thinking, “I’m sure I’ve been here before?” Determined not to give up, I decided to cross to the other side of the Bypass .

At the top of the road was a Bryant Homes building site reception office. Bryant Homes had bought the land and in 1986 was still building houses surrounding the house in 1993.

I went in and asked the receptionist if she had heard of Clap Bridge Farm. “You mean the Hammer House of Horror!" she said. Then directed me to where it was. I felt hurt by what she said, but when I saw the state of the Farm House, I realised what she meant...

However, the feeling I had when I saw the house for the first time was overwhelming and I couldn’t help crying.

The house looked derelict and was in a bad state of repair, having been empty and neglected for 4 years. It looked beyond repair.

I thought they would surely demolish it and I felt sad at the thought of this.

Even though the house looked beyond repair and derelict, I knocked on the broken down door at the back of the house.

There was no one home, except for the spirits of my ancestors. Although the house looked cold and miserable, I felt comfortable and at ease.

Inside the house was in an even a worse state. The roof had been letting in water for some years, due to lead being stolen from the roof, which made some of the rooms inaccessible and probably dangerous.

Fortunately, I had my camera and video camera with me and took lots of photographs and video footage.

Just as I was leaving the back door house, intending to leave it the way I’d found it, (HANGING OFF!) the new owner appeared. Before he had a chance to phone the Police, for my trespassing, I quickly introduced myself, showed him the Birth and Marriage Certificates, and the reference to Clap Bridge Farm.

He seemed interested and showed me around house again, explaining details about the house and pointing out where there had been alterations in the past.

He told me that the house had a preservation order on it, and was a Grade 2 listed building. Bryant Homes had been prevented from pulling it down.

Now I understood another reason why the receptionist had called it the Hammer House of Horror.

The new owner told me that he had purchased the house earlier in the year and that I was lucky to catch him there. He is a businessman with Central Heating business and only work on the house when he had the time.

I think it was fate that I caught him in, not coincidence.

I believe my ancestors led me there. I went back a few years later and was delighted with what I saw.

"Although the house looked cold and miserable, I felt comfortable and at ease."

"When had my ancestors actually lived there?"

I   was interested to find when my ancestor’s had actually lived there. I worked back from the dates I knew they were definitely there in all the Census Records.

During the time it was owned by my family, there has been a lot of land development in the area, which would have cut through a number of local farmlands, due to the new Bishop Stortford, Dunmow & Braintree Railway line.

In 1875, 10 years after Henry Sharpe Foyster had taken over the sole running of the farm, there began a long depression due to the import of cheap American wheat. The rent of the farms fell.

Much land was unlet and some farms were taken by hard-working Scot tenants who obtained a bare living. By the end of the century, the position was improving.

James Perry, who was born in Bocking, was listed in the 1890 Kelly’s directory as a farmer at Clap Bridge. Agricultural Shows were held annually in Chelmsford. The Earl of Essex owned 3,090 acres in Rayne, Braintree.

In the 1871 census at Clapbridge Farm, Henry is listed as Henry Foyster aged 35, married to Ann Elizabeth. They had one child of 9 months, a daughter named Edith Marion Foyster.

The farm consisted of 132 acres at that time. He had 5 boys and 2 men working for him. They also had a 15 year old servant called Eliza Brock.

In the 1861 census, John Foyster was head of Clap Bridge Farm. Also listed was Henry Sharpe, 24, born Halstead, listed as being a Carter/servant. What a surprise this was! I had unleashed another mystery. Was John Foyster Henry’s father or not?

"I had unleashed another mystery. Was John Foyster Henry's father?"

In 1851 John Foyster, born in Kenninghall, and Sarah (nee Fisher) born Long Stratton, was running Clap Bridge Farm when farming was at its height.

He is also listed in the 1851 Kelly’s Post Office directory as running Stubley’s farm in Halstead.

Also listed in 1851 census at Clap Bridge Farm was Henry Sharpe, age 14, born in Halstead This time he was listed as a Nephew. Bells were ringing!

In the 1891 census, James Perry aged 28 and single, was head of Clap Bridge Farm.

In the 1901 census Arthur Wilks, aged 43, was listed as Farm Baliff at Clap Bridge Farm.