Bulmer's Cider: Past and Present

From the son of a Yorkshire farmer to a multi-million cider empire...

The 1911 census transcripts for Herefordshire are now available on TheGenealogist.co.uk and include the founders of H. P Bulmer, which owns a number of famous brands such as Bulmer's Cider. Read the story of the Bulmer family from the son of a Yorkshire farmer to a multi-million cider empire...

Bulmer's was founded in 1887 by Henry Percival Bulmer, born in Credenhall Herefordshire in 1867, he went by his middle name Percy. The family had long been involved in wine production, which had started with his great-grandfather Edward Bulmer.

Percy Bulmer's father was the Reverend Charles Henry Bulmer. Details of his father and two of his uncles can be found in the Clergy Lists on TheGenealogist, part of the Diamond subscription. Two of Percy's other uncles still continued with the family wine business.

Percy had often been unable to attend school as a child due to his severe asthma, which made it difficult for him to find employment in later life. He decided that the only solution was to start his own business, and his mother had advised him to start a business in the food or drink industry as these "do not go out of fashion". Percy and his brother Edward Frederick had previously made small amounts of perry and cider using their neighbour's stone mill. Percy used this as the basis for his business and began making larger quantities. In 1887, he produced 40 casks and established a small business premises at Maylord Street, next door to the Hereford Times. His brother Fred who had been studying at King's College in Cambridge decided to abandon his planned career in teaching, and joined Percy in the cider making business. Their father gave them a loan of £1,760 and they moved to a one acre site at Ryelands Street, where they had a small hut with a cellar below. Their staff consisted of one other person, Thomas Kennett, and they were not yet able to afford any steam powered machinery so produced all the cider by hand using the mill wheel.

Bulmer Family on the 1891 Census

In 1889, Fred went to the Windsor Great Park and attended the Royal Agricultural Show, where their cider won second prize in every class entered. The brothers then decided to travel around the country to gain more customers, but found people were only willing to buy if they received requests for it. Cider was not as well known in other parts of the country, and the brothers realized they needed to generate more awareness and create a demand for cider in order for the business to grow. They found addresses from trade directories, wrote booklets and sent these out to as many people as possible.

1890 was a poor year for their apple crop due to wet weather and they were forced to buy high priced apples from Somerset. Then in 1891, they were betrayed by their solicitor and uncle (by marriage), who purchased the surrounding ten acres of land at Ryelands, which the brothers needed to expand into. Fortunately for them, both the landlord and their uncle died of natural causes on the same night, and with the help of another uncle they were able to buy the land. Over the next few years they sold off three acres of the land to builders and paid off the whole cost of buying the additional ten acres.

With the land issue resolved, they began experimenting with different pressing machines, but found most were designed for wine pressing and not cider. Percy travelled to France to learn more about the science behind cider making. They also received additional help with loans from a bank manager, who was a family friend, and some of Fred's Cambridge friends. They invested in large oak vats, which could store more when apples were cheap, and then be sold when prices were high. They expanded their cellar, which happened to be on sand and gravel, making it easy to dig down and sold the excess sand and gravel to builders. Their machinery problems were over when they met Robert Worth, an engineer from Stockton-on-Tees, who was able to offer advice and build machines for them at a reasonable price. They planted their first 60 acres of Orchard at the family farm in Broxwood, and in 1894 employed a travelling salesman to help out with the business.

Percy with his family in the Herefordshire 1911 Census. The 1911 Marriage Finder Tool shows his marriage to Susan Ball in 1894.

In 1906 the brothers began producing champagne cider, which Percy had learnt how to make during his trip to France, and in 1911 Bulmer 's was granted the Royal Warrant, which is still held today. By the end of 1919, Bulmer's had 200 employees.

Fred was also involved in many social issues such as housing, education, health and woman's right and was shocked by the poor living conditions in Hereford. He became a local Magistrate, Mayor of Hereford in 1908 and again in 1925, and founded many organisations dedicated to improving the lives of workers such as the Hereford Dwellings Ltd in 1901, which built 12 cottages in Moor Street. In 1898 he created a pension scheme for Bulmer's employees, and shortly after he retired in 1938, donated 10,000 £1 shares to establish a Welfare Trust, which helped families in need, created sickness benefit and holidays with pay.

In 1918, tragedy struck the Bulmer family when the Reverend Charles Bulmer passed away and Percy's eldest son Geoffrey was killed in the First World War. Percy was also terminally ill, so he and Fred decided to turn their partnership into a limited company. 75% of the shares were held by Percy and Fred, and the remaining shares were given to family and loyal employees.

Percy died in 1919 and Fred took sole control of the company as Chairman and Director. He began carbonating the cider for the first time on the premises and launched Woodpecker Cider in 1926. During the 1920's his eldest son George Henry Bertram, and Percy's sons Henry Howard and Edward Charles joined the company. Fred remained Chairman until his death in 1941, and his nephew Edward took on the position. 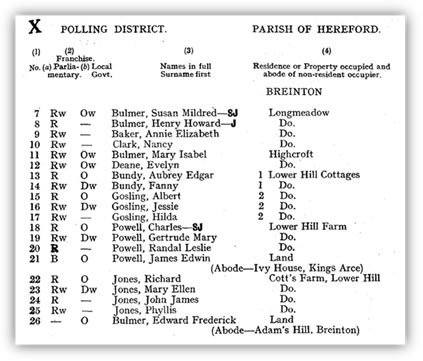 The Second World War created a number of challenges for the company, and a canteen was opened to make sure that all employees had at least one meal a day. Sadly both Edward Bulmer and Fred's youngest son Oscar died during the War. Edward was evacuating cottages after a Lancaster landed in Buckinghamshire and over ran its runway, crashing into a nearby field. The plane was still carrying bombs and Edward was in a cottage garden when the plane exploded. A stained glass window was erected at St. Mary's Church in Westcott in honour of his bravery. He was succeeded as Chairman by his brother Howard.

Over the Twentieth Century, the business expanded enormously, buying out other cider makers such as Godwin's Cider and the Gloucestershire Cider Company. Fred's son George Henry Bertram succeeded his cousin as Chairman in 1967, and Peter Prior became the first non-family member to become Chairman in 1973. He had been a Director for several years and helped to reconstruct the company, floating it on the London Stock Exchange in 1970 with the Bulmer family retaining 65% of the shares. By the 1980's Bulmer's produced 60% of the cider market in the UK and in 1988 purchased Symond's Cider who made the famous 'Scrumpy Jack' and in 1996 purchased Inch's Cider famous for their 'White Lightning' cider. In 2003, Bulmer's was purchased by the Scottish and Newcastle Brewery for £278 million, which was later purchased jointly by Heineken and Carlsberg in 2008.