Emilia Fox - Who Do You Think You Are?

A long line of theatrical ancestors...

The fifth celebrity taking part in this year's 'Who Do You Think You Are' series, Emilia Fox is best known for her role as Dr Nikki Alexander in the BBC series 'Silent Witness'. Born in Hammersmith 31st July 1974 to parents Edward Fox and Joanna David (Joanne Hacking), Emilia is descended from a well known theatrical line.

Her father Edward Fox the stage, film and television actor is the son of Robin Fox, an actor and theatrical agent. Edward's wife, Emilia's mother, Joanna David is a British television actress and his two siblings James (actor) and Robert Fox (television producer) are also in the family business.

Interestingly the theatrical line does not stop at Emilia's grandfather Robin Fox, according to census records Robin's mother Hilda Hanbury (Hilda Louise Alcock) was a Music Hall actress along with her sister Lily Hanbury (Lillian Florence Alcock). The two sisters were of seven acting cousins all of which can be viewed in a family tree found within the 'Who's Who in the Theatre 1922', part of the occupational records available in the Diamond subscription on TheGenealogist.

Another interesting member of Emilia's paternal family is her 2x Great Grandfather Samson Fox a well known industrialist of his generation. Samson Fox was born in Bradford, Yorkshire on 11th July 1838 to Jonas (James) and Sarah Fox. At a young age he began work as a power loom weaver as shown in the 1851 census aged 12 with his father. 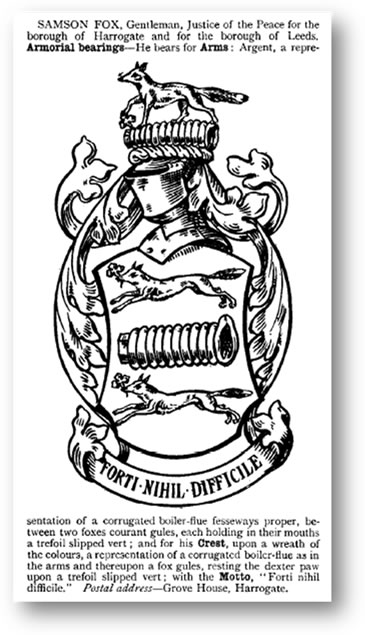 After learning the tool making trade as an apprentice, he was running his own tool making business by the 1871 census.

Samson later went on to set up 'The Leeds Forge Company' where he developed the corrugated boiler flue for which he became famous.

Samson was a benefactor to the locals of Harrogate after purchasing Grove House where he can be found living in the 1901 census. He funded many projects for the town including street gas lighting and social housing; he gave generously to the poor and was Mayor to the town from 1890-1892.

Samson Fox was also Justice of the Peace for Harrogate and Leeds as seen in the 'Armorial Families' book within the Peerage records available in the Diamond subscription.

The Peerage and Heritage records on TheGenealogist document the ancestry of the titled and landed families in the UK and Ireland and can include details of individual peers providing biographical information such as births, marriages and family members. Many families' importance and wealth varied throughout the years and so a family relationship can extend from the highest to the lowest in the land.