Robin Gibb - Who Do You Think You Are?

Escaping life in the cotton mills...

The latest celebrity to feature in BBC's 'Who Do You Think You Are?' is Robin Gibb, from the Australian group 'the Bee Gees'. Robin was born on 22nd December 1949, and had a younger twin brother Maurice Gibb. Although raised in Australia, the twins were originally born in the Isle of Man to British parents Hugh Gibb and Barbara Pass. They have an older brother Barry, as well as an older sister Lesley and younger brother Andrew.

The family moved to Chorlton, Manchester in the 1950's then emigrated to Brisbane, Australia in 1858. Barry, Robin and Maurice formed the Bee Gees shortly after and went on to become international stars, and one of the best selling groups of all time with record sales estimated at over 220 million. 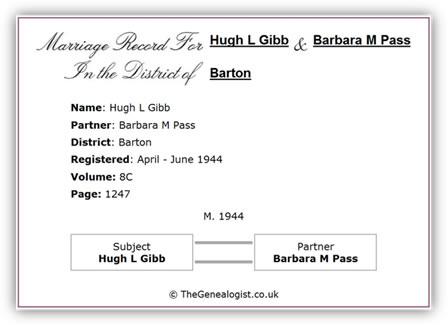 Marriage of Robin's parents on TheGenealogist.co.uk

Robin's father Hugh Gibb was born in Chorlton Lancashire in 1916, the son of Hugh Gibb and Edith Yardley. Robin's grandfather was born in 1892, in Lanarkshire Scotland, and served during the Second World War. The Gibb family are shown on the 1901 census with father Matthew Gibb recorded as 'Staff Quarter Master Sergeant'. The 'Who Do You Think You Are?' show will be looking in depth at Matthew and his role in the Second Anglo-Afghan War. Matthew's wife Mary James, born in 1831, was originally from Somerset and was the daughter of John James, a coal miner from Farrington near Bath.

William Gibb & Family on the 1901 Census

Robin's grandmother Edith Yardley was born in Manchester in 1891 to joiner William and his wife Hannah. Hannah was 16 years younger than William and became step-mother to the 7 children William had from his previous marriage. His first wife Annie had died in 1889 at the age of 38. William is seen on the 1871 census in Lancashire as an Omnibus Conductor, and in 1861 is with his parents Thomas and Ann in Cheshire. Robin's Great Great Grandfather Thomas Yardley, born in 1826, is recorded as a railway worker. Census records for England and Wales are available on TheGenealogist.co.uk from 1841 to 1901 for all Premium subscribers, and the 1911 census is currently being added by county to the Diamond Premium. 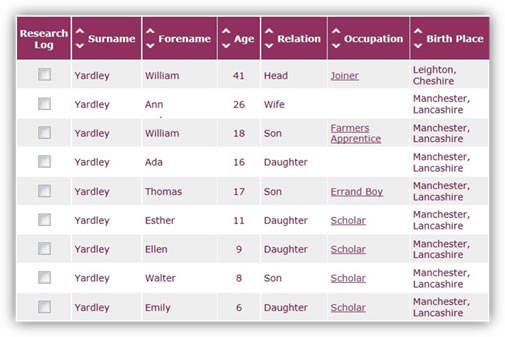 On Robin's maternal line, the family are still in the Lancashire area, and his grandfather Ernest Pass is the son of warehouseman, James Pass and his wife Mary Ann Crompton. Mary Ann is the daughter of Thomas Crompton, born in Worsley in 1834. The 1851 census shows Thomas living with his parents Robert and Sarah and his five sisters. The whole family are recorded as cotton workers, even the youngest sister Hannah who was only 10 years old. The cotton industry was booming in the 1850's in Lancashire, with Manchester developing into an important commercial city. Thomas escapes life in the cotton mills by learning a trade and by the 1861 census he is now a clogger and shoe maker.

Robin's maternal grandmother Nora Lynch was the daughter of Irish born James Lynch and his wife Cecilia Jennings from Stockport. Cecilia was a mid-wife in the early 1900's and Robin will be discovering why she was summoned to appear before the Midwives Penal Board.