The first ever Olympics to be held in the UK... 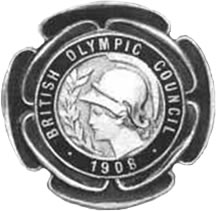 The planning and preparation for the London 2012 Olympic Games has been far from easy, but spare a thought for the organisers of the Rome 1908 Olympics when Mount Vesuvius exploded on the 7th of April 1906 and devastated the city of Naples. Italy was forced to divert funds into the rebuilding of Naples and withdraw from hosting the Games. The 1908 Olympics were instead given to London and our Edwardian ancestors got to experience the first ever Olympics to be held in the UK.

The White City Stadium was built in record time by London company George Wimpey, ready in only ten months and was opened as the official Olympic Stadium by King Edward VII in April 1908. It seated 68,000 people and was considered a 'technological marvel' for the period. The stadium stood until 1985 when it was demolished to make way for the new BBC television centre.

The London 1908 Games were not without their own controversies, as it was the first time that people competed in a national team rather than as individuals, the beginning of many political disputes. During the opening ceremony, Finland, which was then part of the Russian Empire, declined to carry a flag at all rather than parade under the Russian flag, and some Irish contestants refused to march under the British flag.

Sweden and the United States were fuming over the absence of their national standards from the stadium flagpoles, particularly since those of China and Japan were included despite them having no athletes competing. As an official protest, the United States refused to dip their flag as they passed the royal box in the opening procession. The team captain later defended his flag bearer stating "This flag dips to no earthly king".

"This flag dips to no earthly King"

The London Games led to the establishment of standard rules in sports when in the 400m run, the American winner was accused of interfering with British contestant Wyndham Halswelle and a re-run was called. Unfortunately the definition of interference was different in both countries and the Americans therefore refused to participate in the re-run. With 3 of the 4 runners American, Halswelle ran the race alone and naturally won the Gold. American athlete John Taylor also became the first African-American to win an Olympic Gold medal, completing the third leg of the 400m relay. 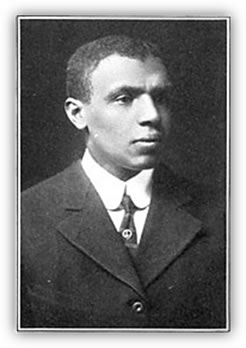 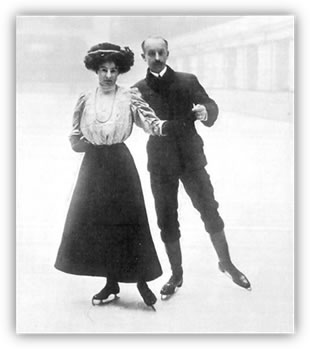 In total 1,971 men competed in the 1908 Olympics and 37 women. British woman Madge Syers won Gold in the first figure skating competition to be held at Olympic level. She had previously been the first woman to compete at a world figure skating championship in 1902, entering what was then an all-male sport. She won the silver medal and prompted officials to create a separate event for women. Madge also competed in London 1908 with her husband Edgar in the pairs skating and won the bronze medal.

Find your sporting ancestors on TheGenealogist.co.uk

As TheGenealogist.co.uk includes the occupation field in their census transcripts, it is the best website for finding out if your ancestors participated in sports with many entries recorded with sporting professions. The keyword search facility allows you to search without a name so you could search purely on occupation. A search across the 1911 census for and individual sport such as footballer, cricketer, jockey, professional boxer or a more general 'athlete' can reveal the sporting heroes of the time: 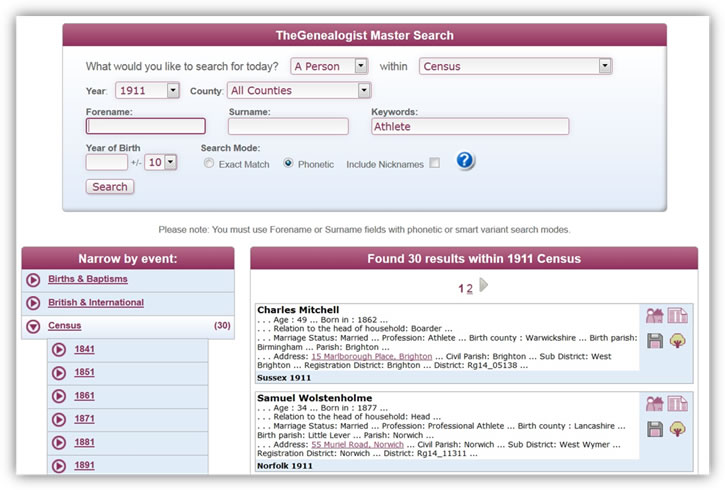 Searching for athletes on TheGenealogist

The extensive occupational collection on TheGenealogist also provides post-census sporting records with the '1935 Who's Who in Sport'. This biographical book contains listings of sporting individuals including achievements in their specialist fields, and provides an encyclopedia of sports and games, sports obituaries, and sporting bodies.

'The Great War' available in the Newspaper collection, focuses on fallen sportsmen in the Roll of Honour sections, with tributes to athletes such as Wyndham Halswelle who was killed at the Battle of Neuve Chapelle in 1915:

School, College and University records are another great resource for sporting ancestors with leading institutions such as Oxford and Cambridge producing many of our past sporting heroes. Albert Gladstone, the grandson of former Prime Minister William Gladstone, competed in the 1908 London Olympics and won a Gold medal in rowing. He is shown on the 1899 - 1909 Eton School Register on TheGenealogist: 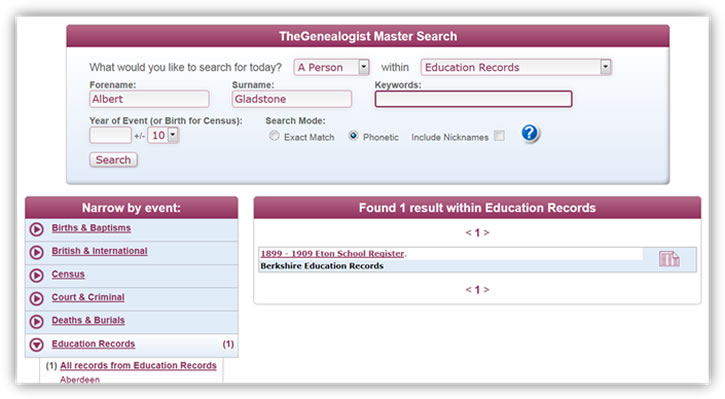 Although much has changed since the Edwardian's London Olympics in 1908, such as the disappearance of bicycle polo and the tug-of-war, we can still find many similarities in the Games over a hundred years later. As well as the usual political and financial disputes, our ancestors also enjoyed similar poor weather in 1908, particularly in early July, with tracks water-logged and flooded. Perhaps the bad weather is a promising omen as we head into London 2012, as in 1908 along with horrible weather, Great Britain also topped the medal table for the first and only time with a massive 146 medals.