Alex Kingston - Who Do You Think You Are?

A tragic loss during WWI...

In this week's episode of the new series, BAFTA award nominee Alex Kingston sets off on the 'Who Do You Think You Are?' journey to discover her ancestors...

Alex is a well known English actress and is probably best known for her roles as River Song in 'Dr Who' and Dr Elizabeth Corday in the popular medical drama 'ER'.

Alex attended the Rosebery School for Girls, where her inspiration for acting first started after being encouraged by one of her teachers. She later completed 3 years with the Royal Academy of Dramatic Art before joining the Royal Shakespeare Company.

It was during her 3 years with the Royal Academy of Dramatic Art, when Alex met her first husband Ralph Fiennes. Sadly they divorced in 1997 after many years together. Alex re-married a German writer and journalist in 1998 and they have one daughter together.

As well as TV appearances including her notable role in 'The Fortunes and Misfortunes of Moll Flanders' (in which she was nominated for the BAFTA award), Alex has appeared in many films such as 'Essex Boys', 'Boudica', 'The Infiltrator' and 'The Cook, the Thief, his Wife and Her Lover'.

Alex, the eldest of three daughters, was born Alexandra Elizabeth Kingston on 11th March 1963 in Epsom Surrey. Her parents were Anthony Kingston, a butcher, and his wife Margarethe, sister of Walter Renneisen, a well known German actor.

This episode will help Alex and her father understand the circumstances surrounding the tragic loss of her great grandfather William Henry Keevil during WW1, who left a wife and young children, including Alex's 4 year old grandmother.

Looking at the World War 1 Death indexes we can see an entry for William H Keevil registered in 1917 which provides his Military Service Number: 550483. Reported in the September 11th 1917 Issue of the War Office Casualty List we can see that sadly William H Keevil 'Died of Wounds'.

TheGenealogist.co.uk offers a range of War Publications including The Great War series and the War Illustrated which are searchable along with the other record collections via the new powerful Master Search.

Alex's journey continues with a shocking discovery surrounding her 4x great grandmother's occupation. It seems that there is more to the modest occupation described on the 1851 census... 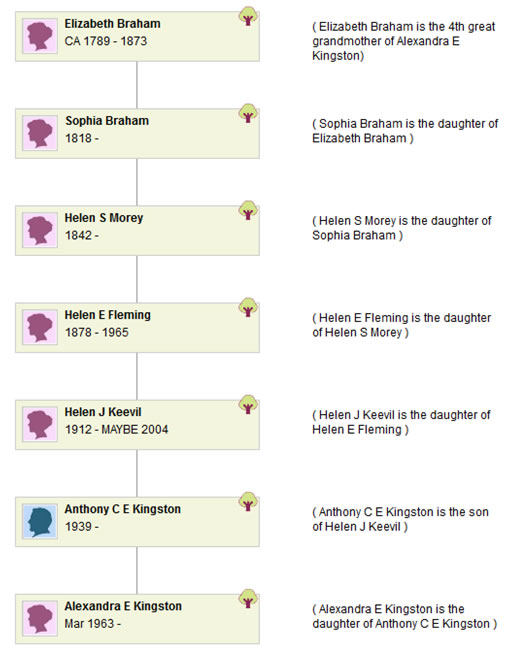 Using the records available on TheGenealogist we have traced Alex's maternal line and produced a tree within TreeView. We can create a relationship chart for Alex and her 4x Great Grandmother to see their connection. Click here to see Alex's tree.

You can follow Alex's journey from 9pm, BBC 1 on the 19th September.

To begin your own journey into your past why not register for one of our 14 day trials at www.TheGenealogist.co.uk/14day?

You will have access to an ever growing collection of records including Census, BMDs, Parish & Non-Conformist Records, Directories, Wills, School & College records, Occupational Records, Military, Peerage and Heritage records and much more.

As well as access to millions of records and unique search facilities, with a premium subscription you will have full access to TreeView, our online tree builder and our own genealogy forum where you can discuss research, brickwalls or success stories with other members.

If you have already done your research and have an interesting story you would like to share then why not visit our community section? Post your story, and you could win £100 worth of S&N Genealogy vouchers!

S&N Genealogy Supplies is the largest UK Genealogy publisher and retailer is now in its 20th year. Please see www.GenealogySupplies.com for all your genealogy needs, from Archival Storage, Books and CDs to Software and much more.