Lesley Sharp - Who Do You Think You Are?

A family history of adoption, fostering and poor families struggling to survive against the odds. 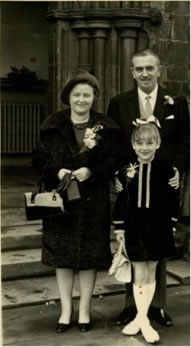 Lesley Sharp is a well-known actress both in films, such as The Full Monty and Vera Drake, and also TV roles including Doctor Who, Scott and Bailey, and Afterlife.

Lesley was born in 1960 but was placed for adoption at only 6 weeks old. Her mother, Elsie, had an affair with a married man, Norman Patient and Lesley was the result. Her distraught mother had not wanted to give her up for adoption. Here we see Lesley pictured with her adoptive parents, Roberta and William Henry John Sharp around 1969.

Lesley was particularly close to her adoptive father who encouraged her to follow a career in acting.

Her biological father, Norman Patient, was a tram driver in Manchester. He was born in 1909 in Chorlton as we can see from a copy of his birth record.

Norman married Ada Clode in 1936 in South Manchester and the couple went on to have four children - Norman, Ann, Doris and Thomas. Lesley, born in 1960 arrived significantly after the four children of Norman and Ada.

Norman Patient, the first child of Norman and Ada, sadly died as a baby in 1936.

Thomas had a career in the transport section of the British Army. In the 1901 Devon Census, he is listed living in The Granbury Parade Barracks, Devon Militia Artillery Depot, in Devonport. 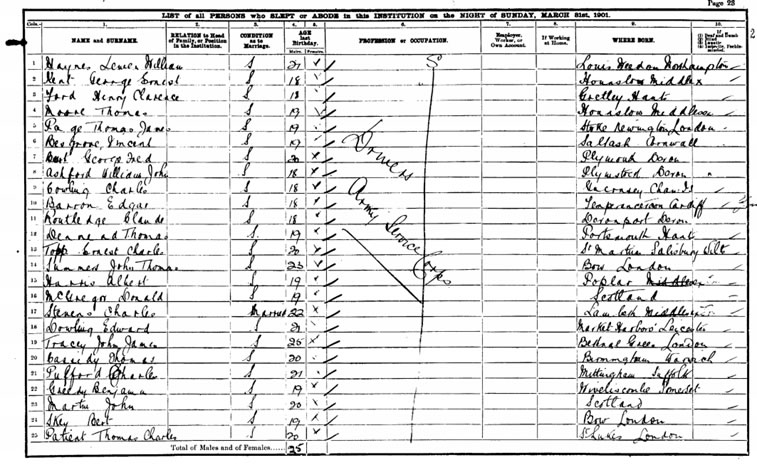 Thomas Patient in the Devon 1901 Census

The career path of Thomas in the army involved horses in the transport section, with his role being one of a 'Driver'. Thomas Charles Patient is listed as born in St Luke's in the Islington area of London.

He married Margaret George in 1906, in Chorlton, Manchester and this side of the Patient family then became established in the Manchester area.

As a career soldier, Thomas was involved in the First World War from the very outset. He was present at a number of the major battles in the first two years including the Battle of Mons, Neuve Chapelle and the 2nd Battle of Ypres. He was honourably discharged from the army in 1916.

His father, also called Thomas Patient, was a horse keeper in London. We can assume he taught his son to work with horses in later years. Thomas (senior) was from Dutton Hill in Essex as we can see from the 1891 Census. Thomas was no longer married at this stage and resided with his sister and brother as well as his children.

The Patient family in the 1891 Census

Going back to 1881, we find Thomas married to Alice and living with their new baby in King Street, St Luke.

The Patient family in the 1881 Census

Here is the TreeView list including Thomas and Alice and their direct descendants:

Alice tragically died in 1887 at the young age of 29 as we can see from a copy of her death record on TheGenealogist. Thomas was a widower at the age of 33.

Thomas was originally from Dunmow, Essex, the son of Charles Patient and Hannah Bush. Charles and Hannah had 10 children together before Hannah died aged 51 in 1881. The size of family and the fact that most of the family work as agricultural labourers must have meant life was very hard with very little money to spare. It must have been a great challenge to feed and to support this large family. 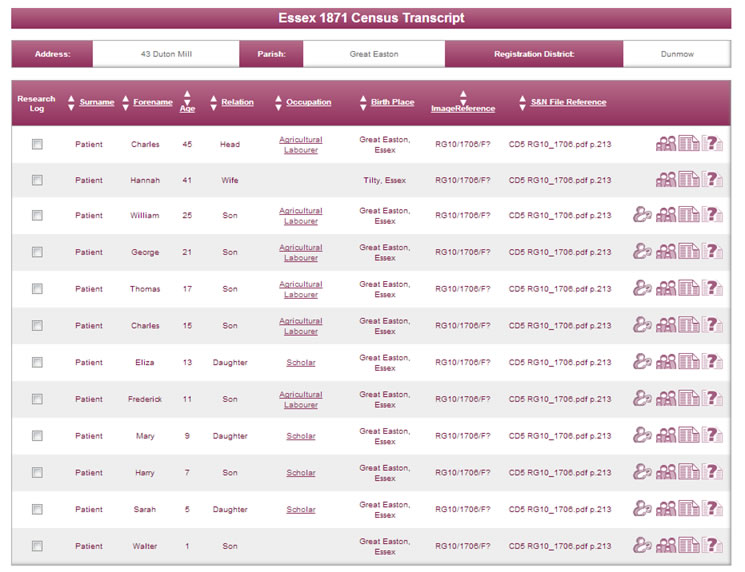 The Patient family in the 1881 census

Between 1855 and 1970 Barnardo's had been home to 350,000 children who had spent all or part of their lives living in their homes in the UK, Canada or Australia. Many of these children grew up unaware of their family circumstances or why they were taken into care. Many were moved around and often overseas.

As his original family subsequently left, by 1901 Charles Patient has taken in a number of Barnardo's children as we can see from the following census records. In 1901 he had William Dines and George Gill (with no known birthplaces).

Charles Patient in the 1901 Census

In 1911, Charles and his second wife Jane have two new Barnardo's children: George Maybury, an 11 year old from Sheffield, and George William Keeir, a 6 year old from London. 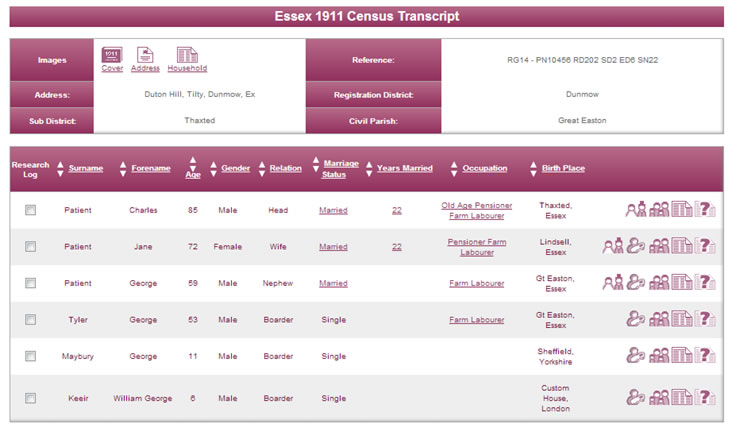 Charles Patient in the 1911 Census

George is found on the 1901 census living with his family in Sheffield. The family went under a variety of surnames including Maybury and Hancock. George's birth parents and his immediate family are seen from the census below: 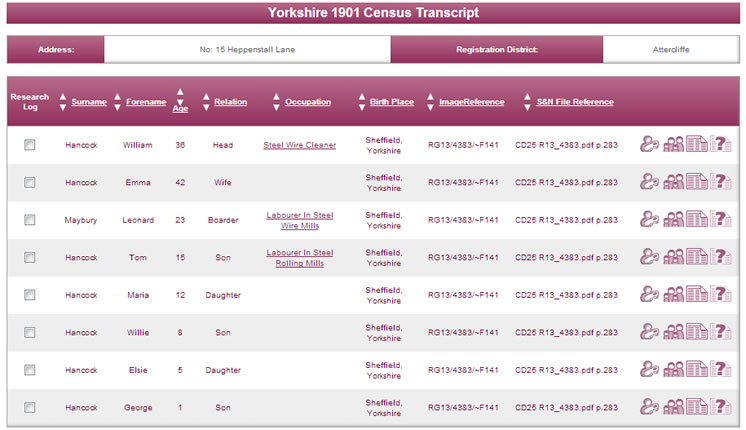 George Hancock in the 1901 Census

After the death of his parents, George and his other siblings William and Elsie are passed into the care of Barnardo's, as their half-siblings felt they could not afford to take care of the three children.

Charles Patient was a recognised foster carer for Barnado's as we can see from both the 1901 and 1911 census. Although in 1911, when he was 85 years old, he was still happy to temporarily take care of orphan children. He appears a kindly 'family man', although hardly coming from an affluent background. He took care of George Maybury in 1911 before George became one of the thousands of British children sent by Barnardo's to Canada to work as farm hands as part of contracts signed with farmers who needed the labour.

William and Elsie were shipped to Canada in 1903 and sent to work on separate farms. George was sent over to Canada in 1913 so would have spent a few years with Charles Patient and his family, which were his last memories of England before being shipped abroad.

William subsequently joined the Canadian Army and ended up back in Europe, but was sadly killed at the Battle of Ypres. George and Elsie both had families although George died young in 1926 in Canada. However, his family line lives on and has hopefully benefited from the time young George Maybury spent with Charles Patient as he finished his education.