Nigel Havers - Who Do You Think You Are?

Well known film and television actor, Nigel Havers, who has made a career playing upper class characters, was born Nigel Allan Havers on the 6 November 1951 in Edmonton, Middlesex. Star of TV series such as Nicholas Nickleby and Downton Abbey and films such as Chariots of Fire and Empire of the Sun, he has been a well-known actor for almost 40 years.

The legal line of his family is well known, but there is also a long line of hard working ancestors who ran their own businesses in professions far removed from acting or the law.

Here we find a copy of his birth record on TheGenealogist.

Nigel Havers was the youngest son of Michael and Carol. His brother, Philip Havers QC, also followed the family tradition in the legal profession.

Michael's sister, Anne Elizabeth Oldfield Havers later became Baroness Butler-Sloss, the first woman to be elevated to the Court of Appeal and subsequently the first woman appointed to head the Family Division of the High Court. She later presided over the start of the inquest into the death of Diana, Princess of Wales.

Their father (Nigel's grandfather) was Cecil Robert Havers, also a High Court Judge. He was the trial judge in the conviction of Ruth Ellis for murder in 1955, the last woman to receive capital punishment in the United Kingdom. He later recommended a reprieve to the Home Secretary but this was not successful. He subsequently sent money annually for the upkeep of Ellis's son.

Here is a copy of the birth record of Cecil Havers, in Norwich in 1898.

Here is Cecil Robert Havers, listed in the 1925 Post Office Directory for London as practising barrister.

Cecil was the son of Daniel Havers and Agnes Sophia Buckingham. Here the family can be seen on the 1901 Census. Daniel is a solicitor in Norwich. His eldest son Charles became a solicitor, as did Cecil. 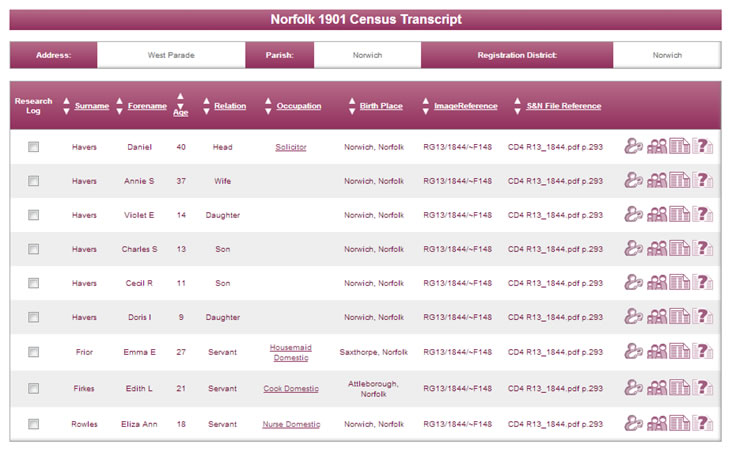 In the 1881 census, Daniel is living at home with his parents, Charles and Emily Sophia. Charles ran an Ironmonger business and Daniel is a young 'Solicitor Articled Clerk'. This is the start of the legal 'dynasty' that continues to this day with the Havers family. 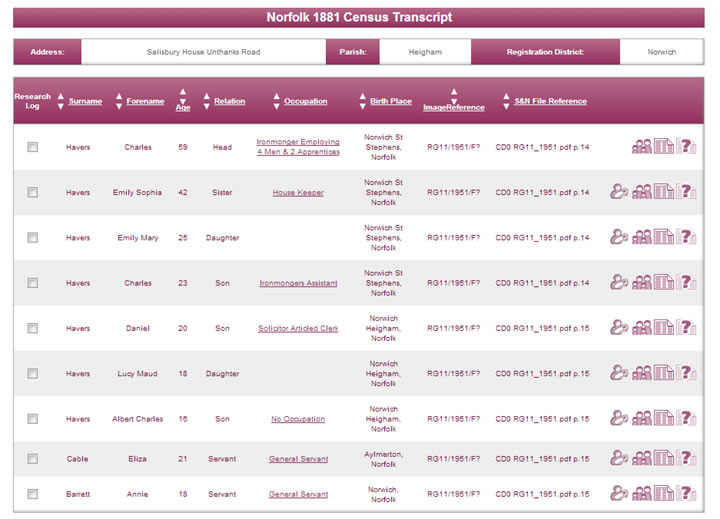 In 1861, Charles and Eliza are found still in the Norwich area. Charles is a farmer employing 5 men. From the census record, we can assume he was fairly affluent and his farming business was doing well, as he also employs 2 servants. 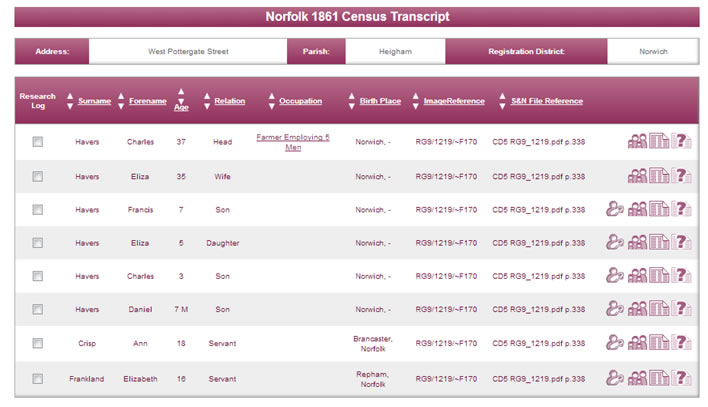 Enid Snelling, married to Cecil Robert Havers, was also from Norfolk. Although maybe not quite as glamorous as the legal profession, her father appears to have been fairly affluent as a 'Suct Lard Refiner' in Norwich. His son James was also involved in the lard refining. 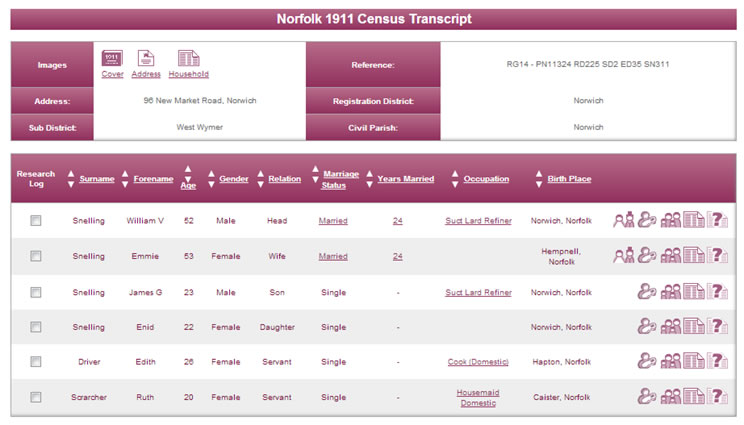 Here is a copy of Enid's birth record in Norwich in 1889.

In the 1891 census, William is listed as a grocer in the parish of Mancroft, Norwich, again doing quite well for himself and employing 2 servants. 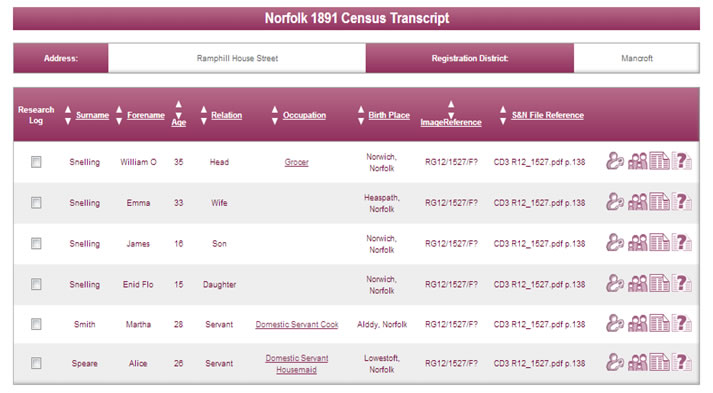 Nigel's paternal great-great-great grandfather Henry Hamblion also achieved success in his business in Colchester, Essex. Here is Henry in 3 census listings on TheGenealogist. He appears to have run a couple of businesses, including an 'inn keeper' and then a 'livery stable keeper'. His horse and carriage business, in which he hired out carriages to the wealthy in Colchester, did particualry well. His business also appears in the Colchester Post Office Directory. 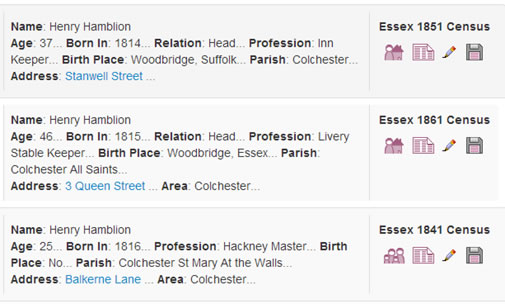 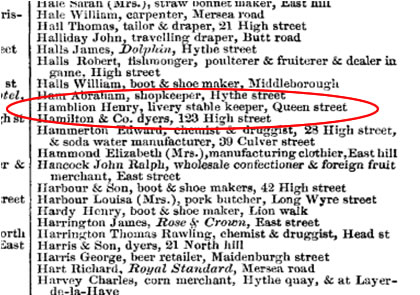 Here is Henry and his family in the 1861 census, in Queen Street, Colchester. Agnes aged 3, Nigel's great grandmother appears in the family listing.

Sadly, Henry's business success was not to last and he hit hard times in 1866. He was declared bankrupt in 1866 at court in London. 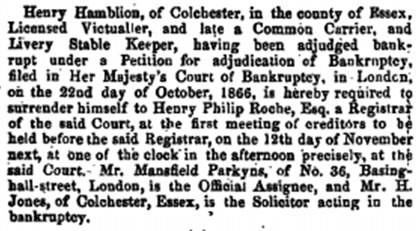 On Nigel's maternal side, there is some Cornish ancestry. His great great grandparents, David and Maria Couch ran a mill in Liskeard. The Couch family were renowned hard-working millers. David was also rumoured to have fathered an illegitimate child.

Their daughter Elizabeth married Eli Wackett, a hay salesman from Hertfordshire, and the family line continues there, with both Carol (Nigel's mother) and Nigel being born in nearby Edmonton.

Here is the Couch family listed in the 1871 census in Cornwall. 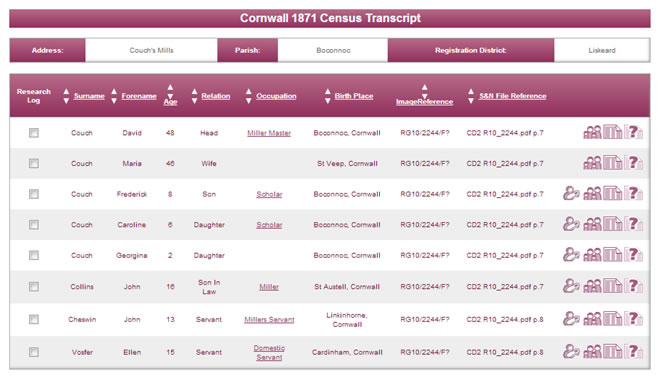 Here is a copy of the birth record of Nigel's great grandmother Elizabeth.

"I do wonder what my ancestors would make of me, an actor, when most of them probably wouldn't have had the chance to go to the theatre."