What Land Did My Ancestor Own or Occupy?

An insight into where your ancestors worked and lived...

Many family historians want to get an insight into where their ancestors worked and lived. Now they are able to search for their forebears within the fantastic resource that is the comprehensive collection of Tithe records for England and Wales online at TheGenealogist. In partnership with the National Archives they are making it possible for family history researchers to search over 11 million records from across England and Wales in the early part of Queen Victoria's reign and to view these valuable original apportionment documents with linked maps all on one website.

Created in a period from 1837 to the early 1850s Tithe records were the result of one of the largest surveys into the usage, ownership and occupation of land in England and Wales since the Domesday book.

Tithes, originally one-tenth of the produce of the land, were paid to the church and, after the Reformation, to some lay tithe owners as well. These "lay impropriators" were often landowners that historically gained the rights to the tithe rent payments on the redistribution of monastery lands in Henry VIII's time. When this land appears in the 19th century records, the sums payable to the successive landholders will be listed within the apportionment records. So you may find that an amount of rent was destined to go to the vicar, and another sum to a non-ecclesiastical landowner. In the example below, the landowner Lord Berners, is also the lay impropriator and so, in theory at least, he paid himself as well as the vicar!

Lord Berners in the Tithe Records at TheGenealogist

The Tithes Commutation Act of 1836 finally abolished payment of "goods in kind" and instituted a fixed annual monetary payment based on the land value. The aim of the government was that over time and with inflation, this tithe payment would diminish to nothing but a mere token amount. But first the government had to discover the value of the land holdings across the country so that it could carry out its plan. To do this, a grand survey was undertaken, and the result was tithe apportionment records and their accompanying maps.

As soon as the Act of Parliament was passed the surveying started. Taking about 15 years to carry out, with the first completed tithe maps and apportionments beginning from 1837.

Three copies of the tithe records were made. One would have been sent to the Parish to be kept safely, but in most cases the accompanying maps were so large that they would not fit in the parish chest. They ended up stored elsewhere in the church; even propped up against a wall and so many were lost or damaged.

The second went to the Church of England diocese with authority over the parish and the third set of tithe apportionments and maps were sent to the Tithe Commissioners in London. This is why copies from the whole of the country are now housed in The National Archives (TNA) and it is these that are now available to search on TheGenealogist.

Let us do a search for the Leicestershire landowner, Lady Noel Byron, the former wife of the poet Lord Byron. We find that she has large holdings in the county at the time of the survey. 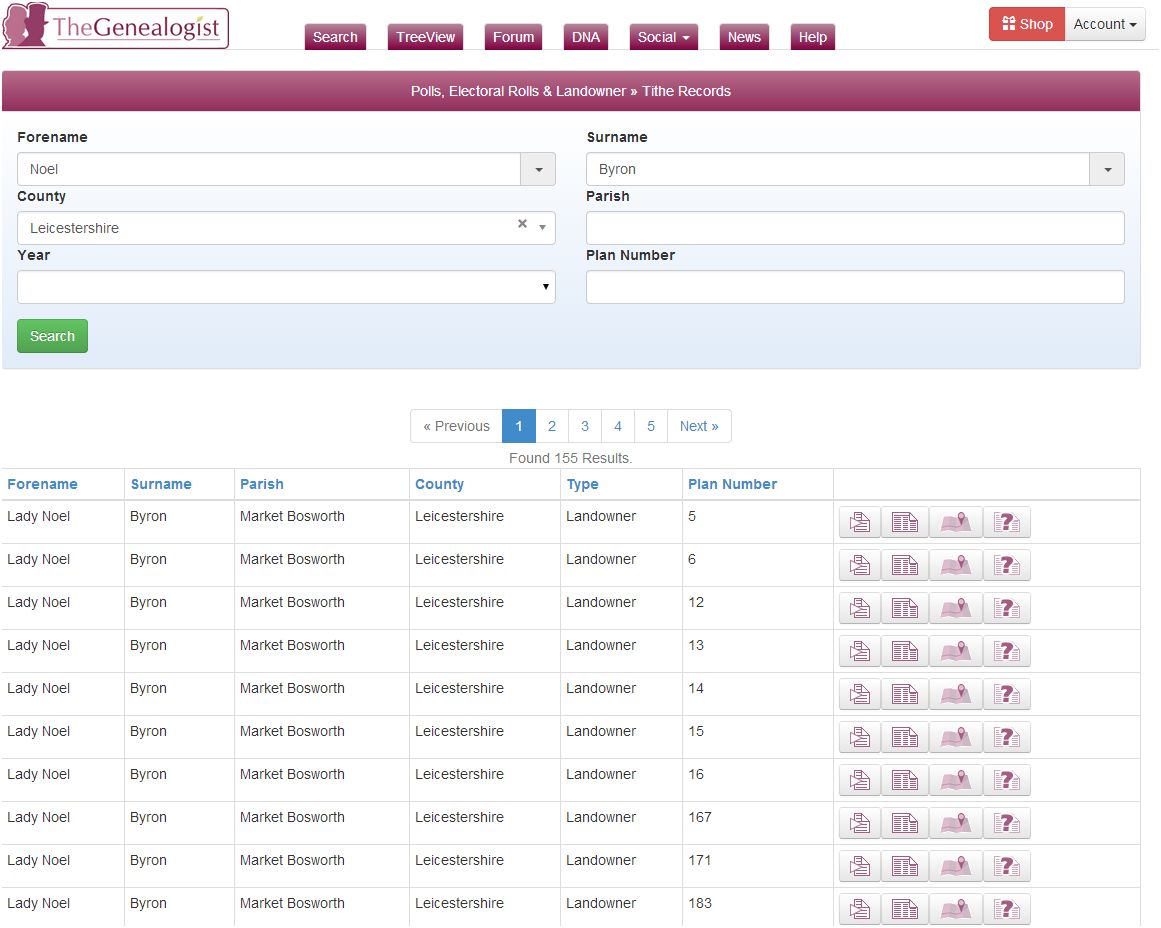 Lady Noel Byron in the Tithe Records at TheGenealogist

We are then able to look at one of the holdings to see the record for some land occupied by a Thomas Godfrey. To see the tithe apportionment requires only a single click and this image of the page reveals the amount of rent payable, in this case, to the Rector alone.

Lady Byron & Thomas Godfrey in the Tithe Records at TheGenealogist

The apportionment gives us the measurement in acres, roods and perches and the value of the tithe payable to the Rector. Infuriatingly, the size of these units of measurement could vary according to the locality that they were applied.

From this record, for the land in question, we gain the name and description given to it, what use each parcel was put to in the "State of Cultivation" and can also take notice of the fact that Thomas occupied other plots as well.

One click shows us exactly where the holding is situated on the plan for the area with a pin on the map giving us the names of the Landowner and the occupier. 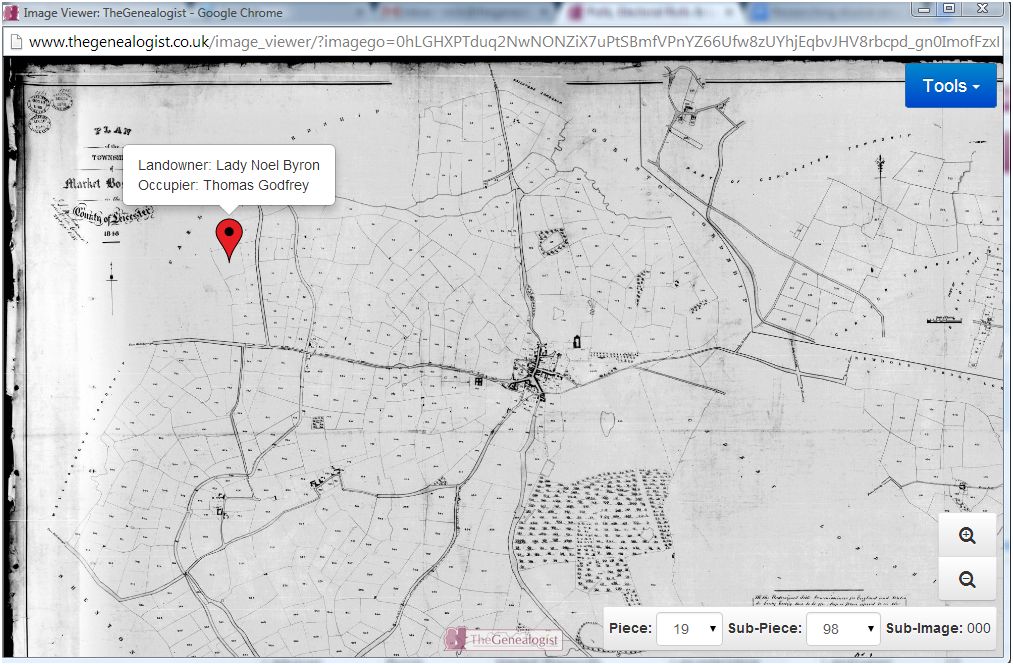 Land was not just in the hands of the aristocracy. Here we see the record for property owned by William Hackett within the Parish of Barleston in Leicestershire. He is listed as landowner, as well as an occupier for several of his parcels of land subject to tithe with one plot, number 8, being occupied by others. 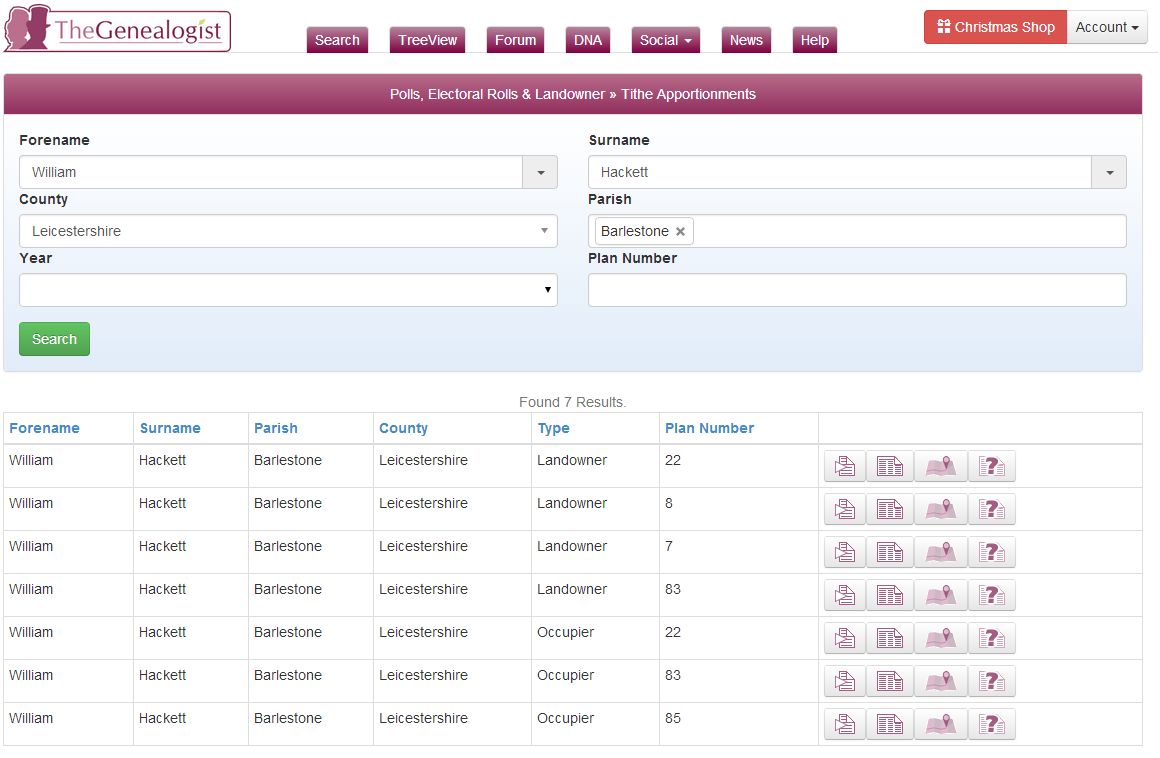 William Hackett in the Tithe Records at TheGenealogist

By clicking on the Transcription icon for Plan Number 8 we can then see the names of both the owner and occupier of the plot, the date it was entered into the records of the Tithe Commissioners in London and the plot number on the plan (right). In this case it is a number of houses in the Township of Barlestone. 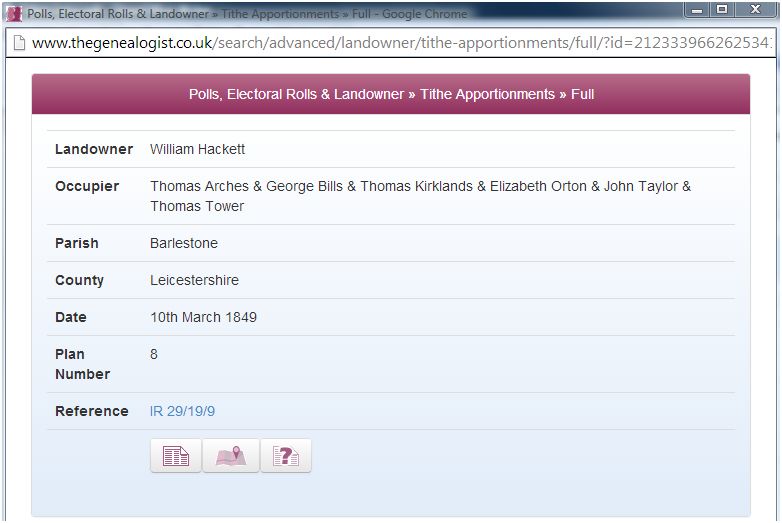 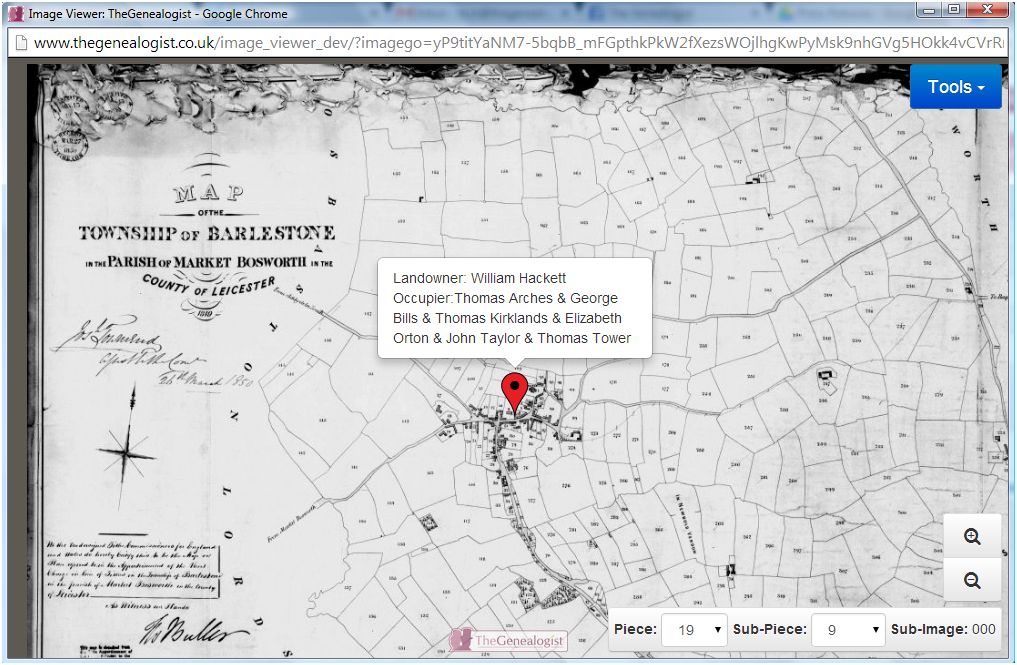 A further click on the Map icon will zoom the researcher in on to the plot on the plan that accompanied the apportionment. You can then use the zoom buttons to move in and out to see the plots in relation to the full plan.

In Middlesex, a county that covered some of the area we would now think of as London, we can find Sir Robert Peel. In 1854 Sir Robert Peel, twice Prime Minister of the country and creator of the modern police force, was the occupier of land owned by the Earl of Listowell in St Margaret's, Westminster. 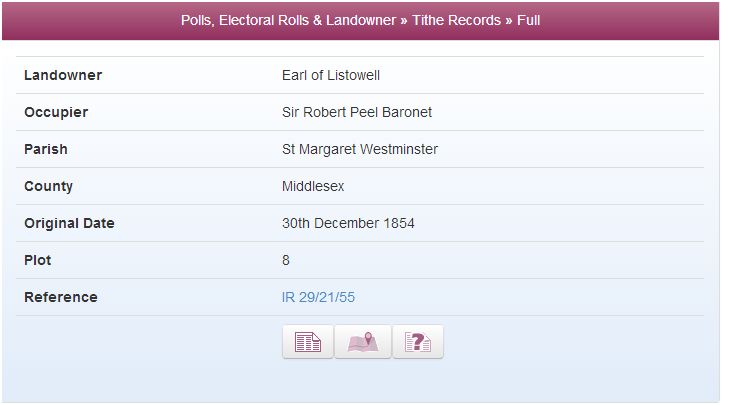 Sir Robert Peel in the Tithe Records at TheGenealogist

The image of the apportionment reveals that it is a house: No. 22 Princess Gate and the tithe map shows us exactly where it was in the row of properties, being plot number 8 on the plan. 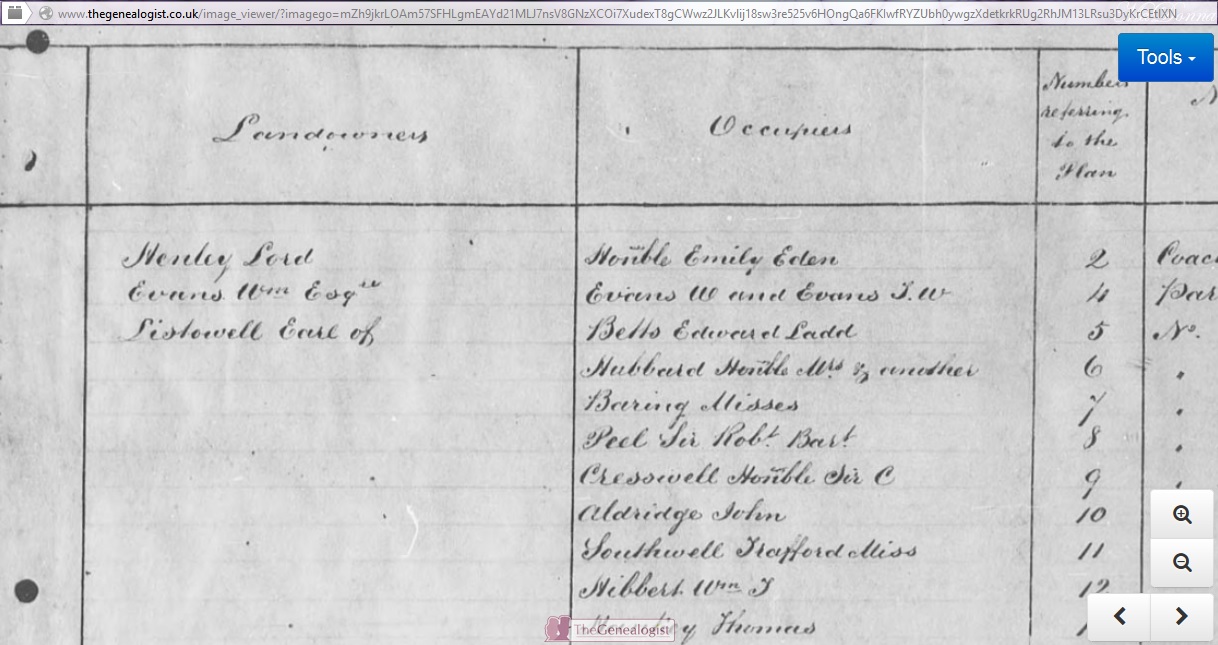 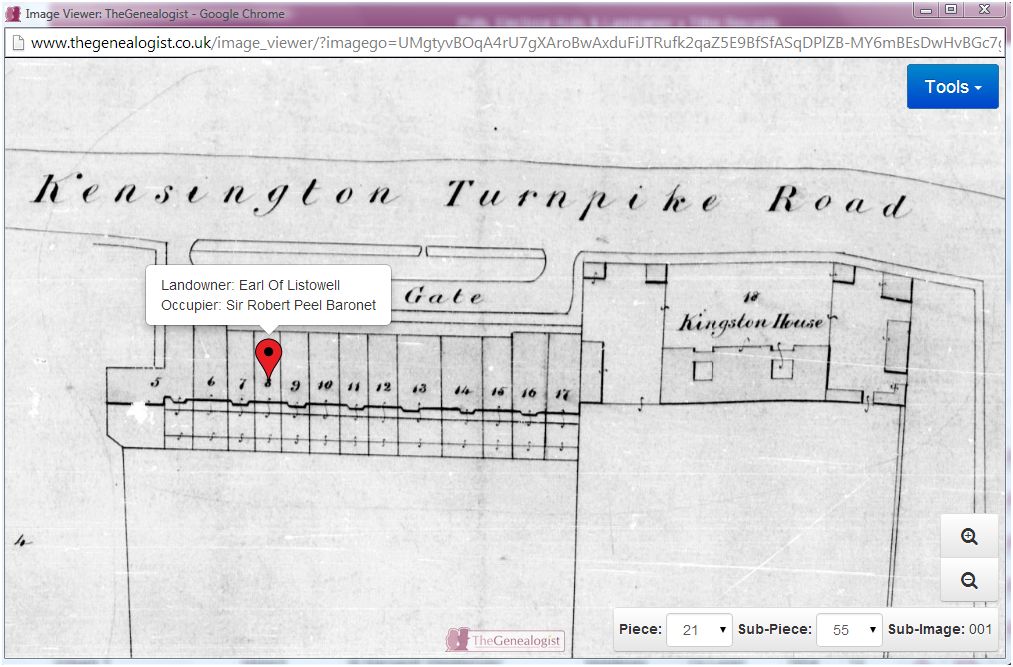 Tithes are a rich resource for family historians to find their ancestors within. As we have seen, they cover owners and occupiers of land from all strata of society in early Victorian times and for the first time they can be searched all on one website at TheGenealogist.