Passenger lists from the 1930s record the voyages of our ancestors

From celebrities to the working class seeking new opportunities

The thirties was a decade of many exciting technological changes, but conversely it was a period of economic depression following the aftermath of the Great Crash of Wall Street. While strides were being made in air travel, with zeppelins being experimented with for crossing the Atlantic, ships still remained the main mode of long distance travel.

In Britain a National Government had been formed in 1930 with Ramsay MacDonald as the Prime Minister and including Conservatives and the Liberals in his cabinet. The financial crisis saw the gold standard abandoned in September 1931 and at the Ottawa Conference in 1932 the British colonies and Dominions decided on policies of lower interest rates, increased money supply and expanded government spending. 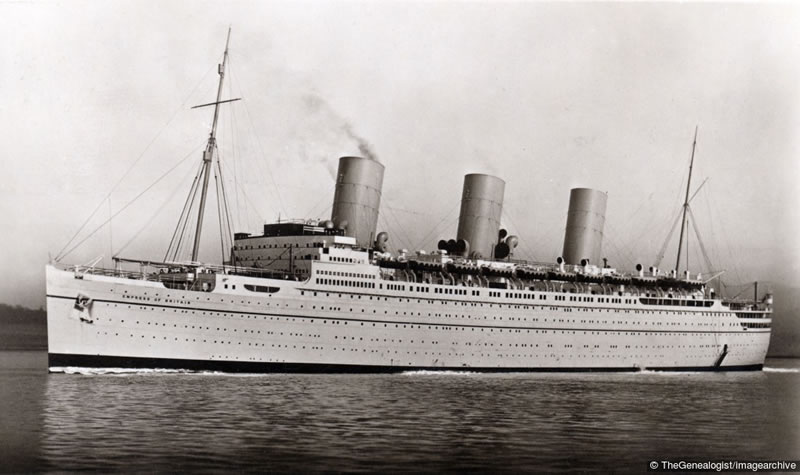 A search of the BT27 outgoing passenger lists released on TheGenealogist discovers the United Kingdom's delegation to the Ottawa Conference travelling on the Empress of Britain as she sailed from Southampton to Quebec on 13th July 1932. At the head of the party was Stanley Baldwin. He had previously been Prime Minister and would succeed MacDonald as P.M. in 1935, when the latter stood down for ill-health. The delegation also included Neville Chamberlain, who would himself take the top ministerial job in 1937 and would be famous for his appeasement foreign policy, and in particular for his signing of the Munich Agreement in 1938 with Hitler.

A fascinating oddity, with this particular passenger list, is that all the ages for the delegates are given as a uniform 1 year old and the representatives were also not required to fill in the country of last permanent residence, nor which country they intended as their future domicile! 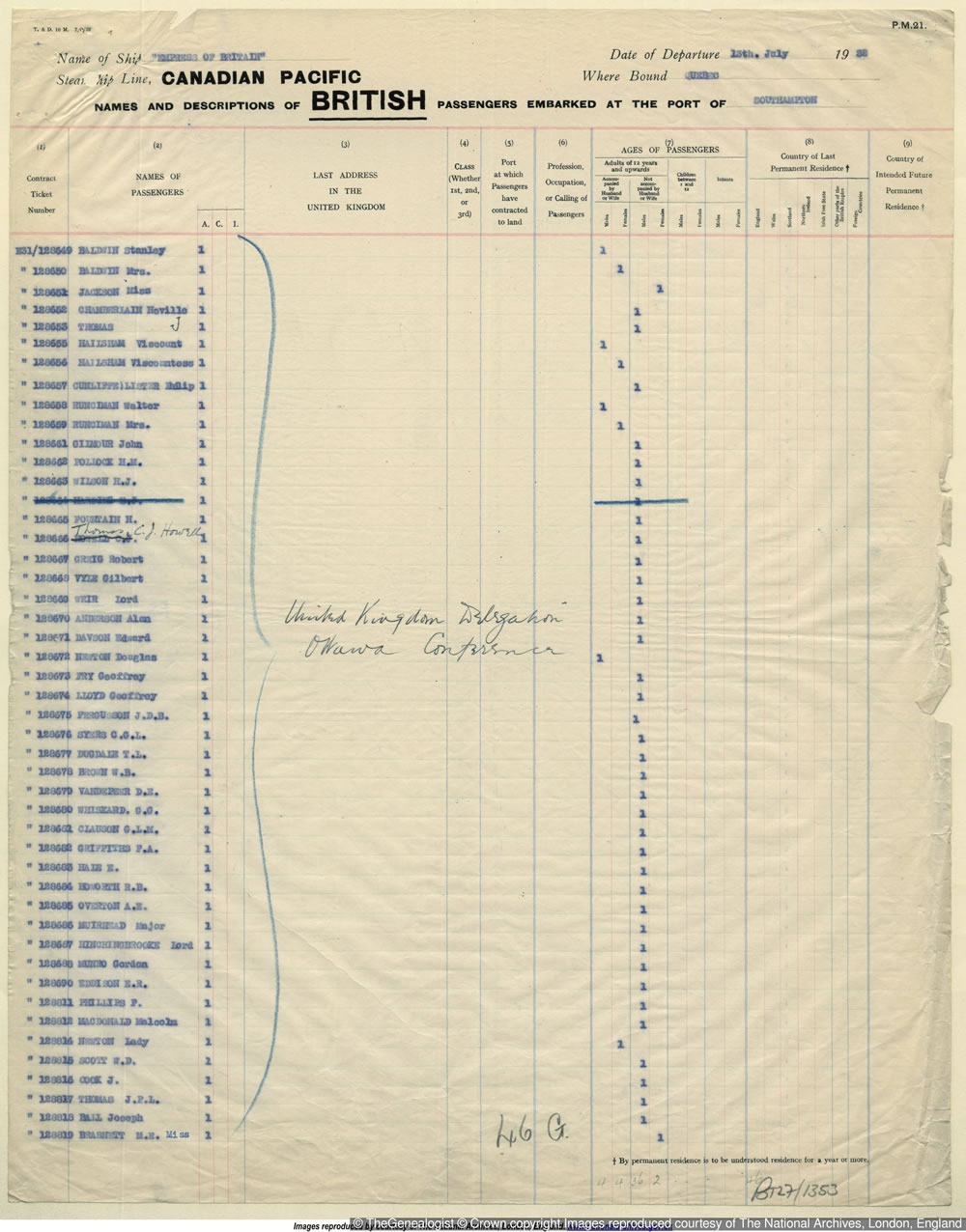 While the Crash had damaged the world economy, some businessmen managed to ride out the storm. In October 1930 we are able to see the 67 year old Henry Ford, the famous motor manufacturer, and his wife Clara on a ship from Southampton to New York. 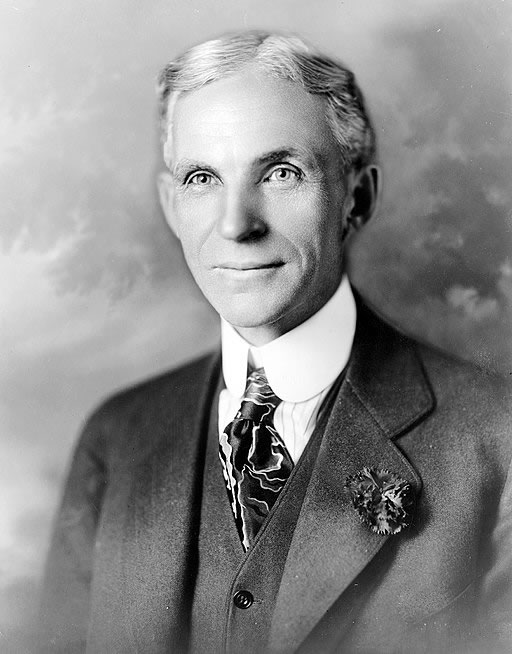 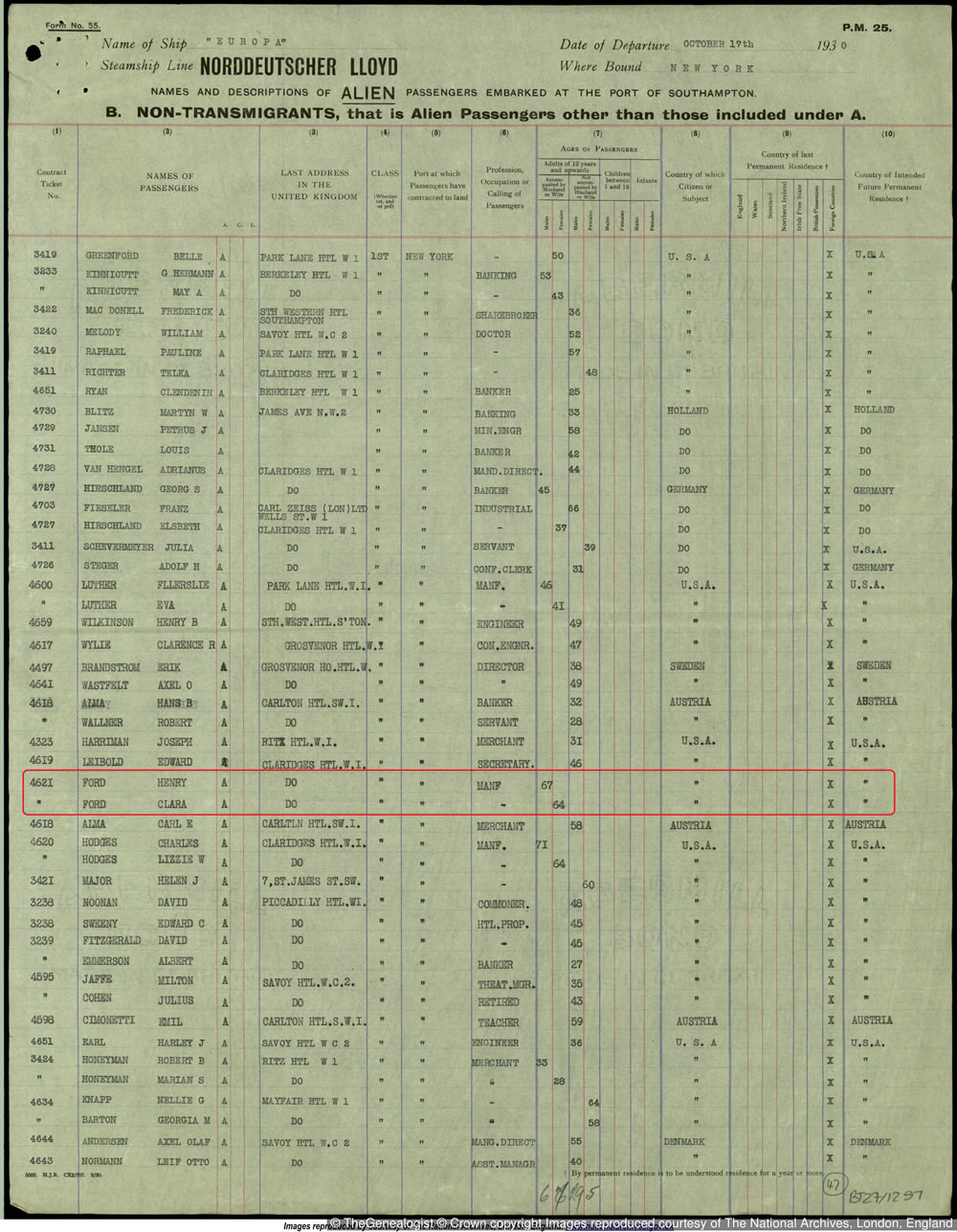 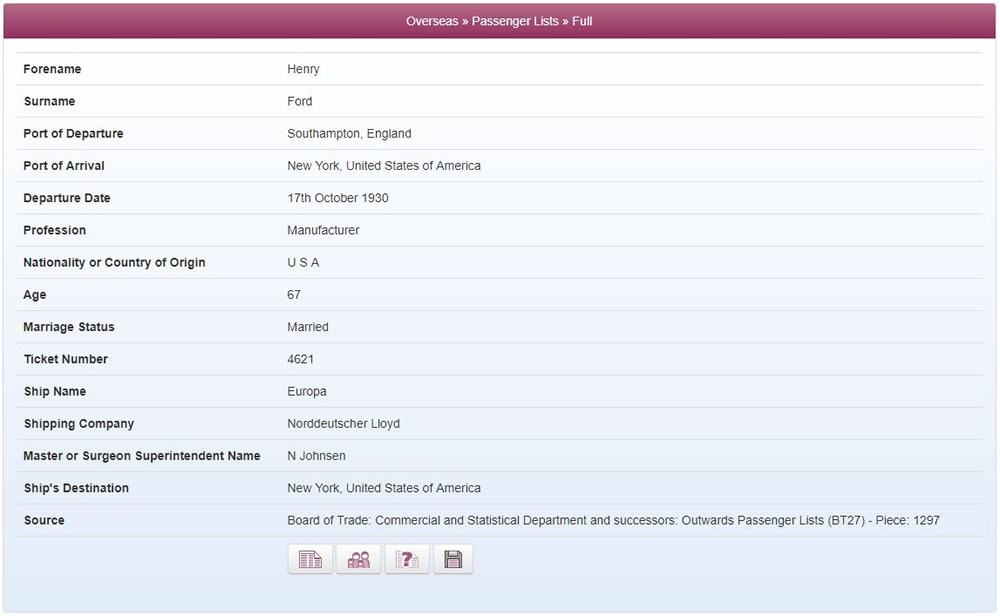 Henry and Clara Ford travelling from Southampton to New York on the 17th October 1930.

The American industrialist had been turning out Ford cars and lorries in England since 1909 and with the downturn in the economy, in the 1930s, Ford's company specifically designed the Model Y (sometimes called the Ford 8) as a smaller car for markets outside the United States who were shunning its more expensive Model A.

Thirties ancestors may have been reading the novels of P.G. Wodehouse, or going to West End plays that he had penned. In 1929 he had been contracted by MGM in Hollywood to write for them, though the studio found so little work for him that he had the spare time to write a novel and nine short stories. We can locate Pelham G Wodehouse in the passenger lists for one trip to New York on-board the Majestic leaving Southampton docks on the 16th April 1930. He was travelling with his step-daughter Leonora, whom he had adopted. 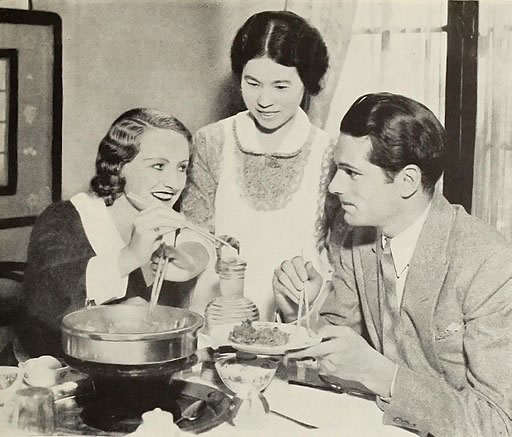 Also, in this decade's collection of ships passenger lists, we can find the departure of the Europa transporting the theatrical greats, Laurence Olivier and Noel Coward to America on the 4th January 1931. Olivier is a 23 year old actor and is travelling to New York with his first wife, Jill: the actress Jill Esmond. Noel Coward, at 31, was by this time one of the world's highest-earning writers with an annual income of £50,000 (£2,790,00 in today's money). He was doing extremely well, notwithstanding the economic depression, as he had already written several hit shows that extended from large-scale spectaculars to intimate comedies. 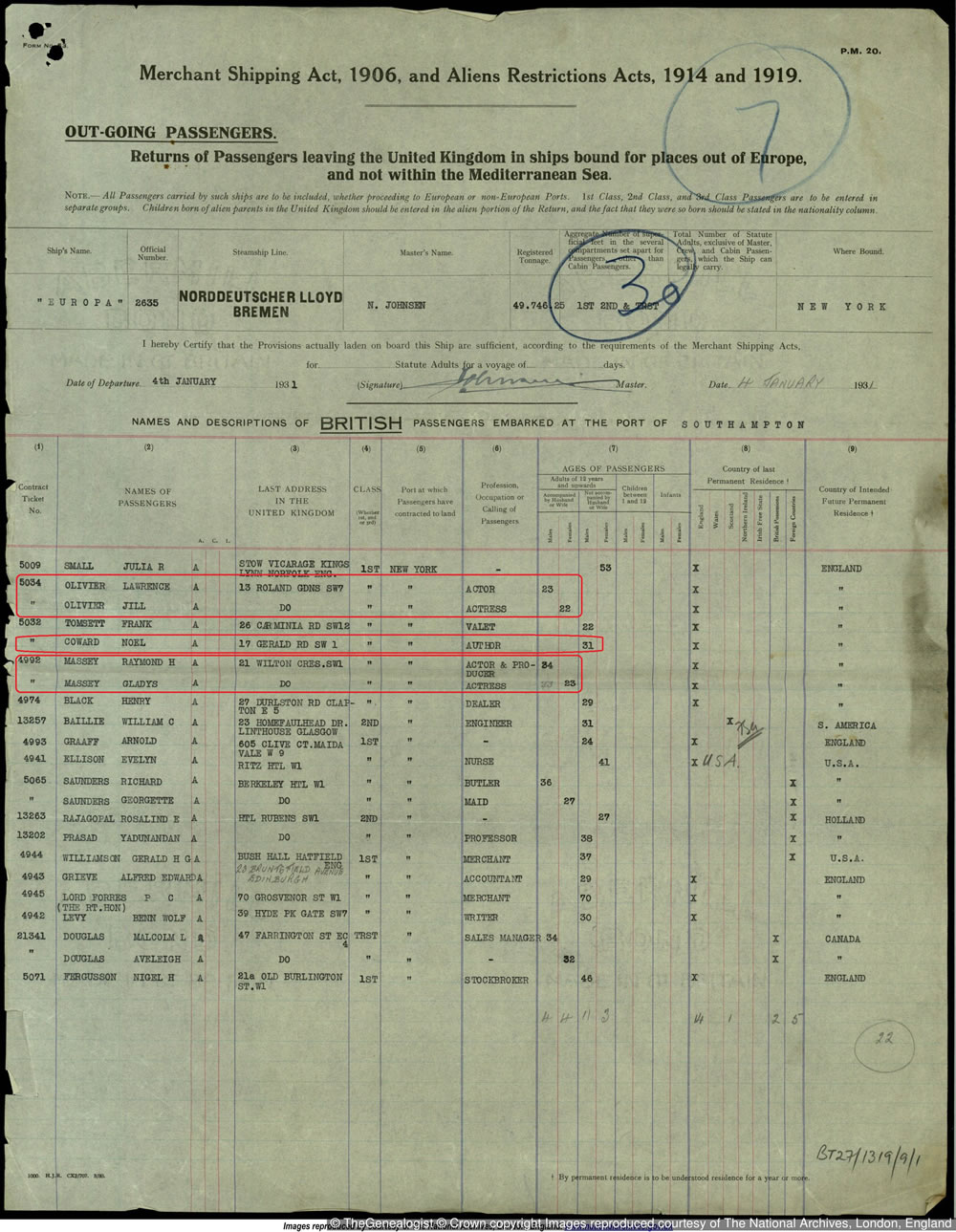 It is amusing to speculate as to how these larger than life theatrical personalities would have interacted onboard ship. But scanning down the passenger list one more line, reveals that added into this heady thespian mix were fellow passengers Raymond Massey and his wife Gladys. Raymond Massey was a Canadian/American actor and producer who was recognised for having a commanding, stage-trained voice. Gladys Massey, his wife at the time, was better known as the actress Adrianne Allen and they are the parents of both Daniel and Anna Massey who became actors in the 1950s and who would be born to the couple in the middle and late thirties.

While it is true that it was the great and the good who could afford to travel 1st class in this decade, there are still a number of working people to be found in the passenger lists travelling for their job, or to try their luck elsewhere. So if you have an ancestor who goes missing from the conventional records it is always worth checking the passenger lists for those who sailed from Britain in this era. You may be lucky and find their journey in the Immigration, Emigration and Travel records on TheGenealogist.