As Armistice Day approaches and the nation remembers those who paid the ultimate sacrifice, many of us may be drawn to seek out the names of our ancestors on the war memorials across this country and further afield. These monuments can be found in the streets of towns and villages and inside and outside places of work, not to mention those at churches and other institutions. For a family history researcher that perhaps now lives far away from where their ancestor has been commemorated, being able to see the monument online at TheGenealogist is a great way of being able to see the recognition of our servicemen ancestors on war memorials across the world. 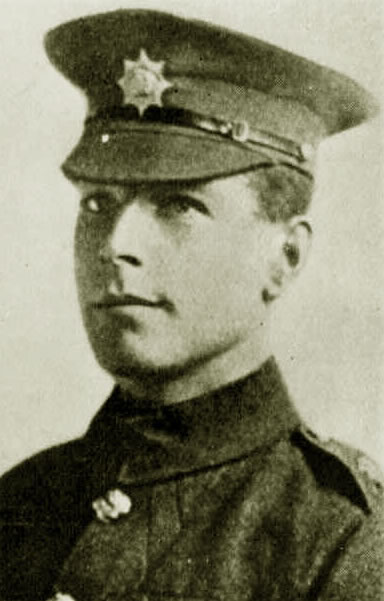 In most cases local memorials will be comprehensive in their coverage of those who died as the community would have known who had not returned from the conflict. War memorials erected by companies to mark their former employees who had fallen in the fighting will also usually be fairly accurate. Occasionally, however, someone may have been missed off the memorial for one reason or another and it is not until a historian points out the omission that it is rectified retrospectively. Sometimes this may even take 98 years to be remedied. This was certainly the case for a former railway worker on the Sheffield war memorial.

Raised by The Great Central Railway in 1922 in memory of their 1,304 employees who lost their lives in the Great War 1914-1918, the Sheffield war memorial should have included all the men that were once in their employ and who had gone to their death fighting for their country. The memorial was unveiled by Field Marshal Earl Haig in 1922 and the railway company was then amalgamated into the The London and North Eastern Railway the very next year when the rationalisation of rail enterprises into the "Big Four" took place. With the new L.N.E.R. becoming the second largest of the railway companies created by the Railways Act 1921, the Great Central Railway was no more. It is possible that the man's name was misread when the memorial was re-cast in bronze in 1925, as others of his surname are inscribed on its panels. It could be that he is one of these but mis-recorded with the wrong initials.

More recently the memorial has been restored by The Great Central Railway Society and unveiled on its former site on the forecourt of the Royal Victoria Holiday Inn - this had once been the Sheffield Victoria Station Hotel. As the restoration was being planned, Sheffield railway historian Ken Grainger noticed that the particular soldier had been missed off the railway company's main memorial in Sheffield. The missing man, Lance Corporal Thomas Norman Jackson, had been included on a plaque at the G.C.R's Mexborough station, where he had been employed cleaning locomotives in the pre-war period. In the hostilities it appears that this man's bravery was very great and should have marked him out and assured him a place on the Sheffield roll, but for some unknown reason Thomas Jackson was left off when the memorial was recast in 1925. This was a particularly striking omission for not only did he serve in one of the oldest regiments in the British Army, the Coldstream Guards, but he had been posthumously awarded the highest military award for bravery that this country has. Lance Corporal Jackson was a recipient of the Victoria Cross which is now proudly exhibited at The Coldstream Guards Regimental Headquarters, Wellington Barracks in London.

The omission of T. N. Jackson has now been put right, after Ken Grainger campaigned to have the Lance Corporal's name added to the memorial. The physical memorial updated by the addition of Jackson's name allows us to also find him in a search within TheGenealogist's latest release of additional war memorials. 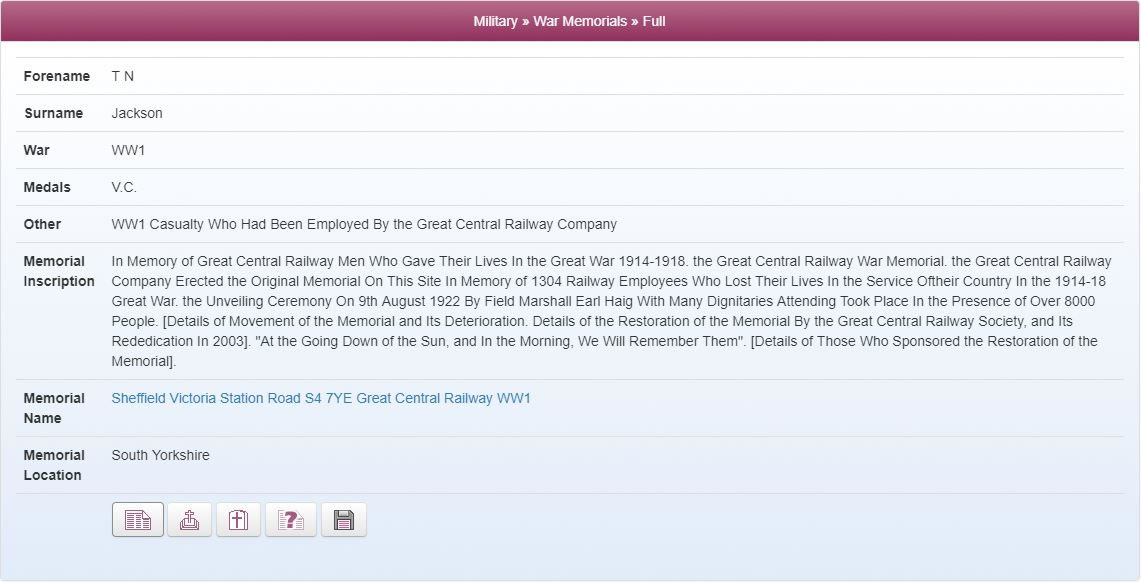 Clicking on the icon to view the original allows us to also see an image of the actual monument which shows us Jackson's name affixed below that of the other men of the railway company that had lost their lives in World War I. 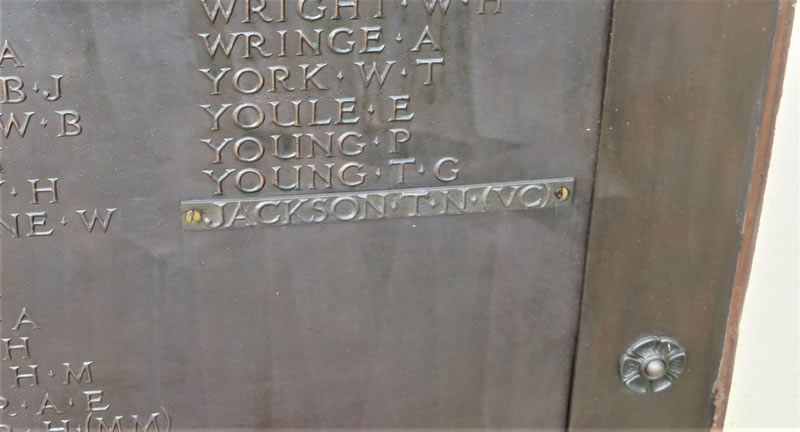 Thomas Jackson was just 21 years old when he had performed his act of bravery at the battle of the Canal du Nord and for which he was awarded the Victoria Cross. His citation in the London Gazette reads:

20810 Lance Corporal Thomas Norman JACKSON, 1st Bn Coldstream Guards
For most conspicuous bravery and self sacrifice in the attack across the Canal du Nord, near Graincourt.
On the morning of 27 September 1918, Lance-Corporal Jackson was the first to volunteer to follow Captain C.H. Frisby across the Canal du Nord in his rush against an enemy machine-gun post. With two comrades he followed his officer across the canal, rushed the post, capturing two machine-guns, and so enabled the companies to advance. Later in the morning, Lance Corporal Jackson was the first to jump into a German trench which his platoon had to clear, and after doing further excellent work was unfortunately killed.
Throughout the day this NCO showed the greatest valour and devotion to duty, and set an inspiring example to all.

You can search for your own ancestors in the ever expanding resource of war memorials at TheGenealogist. The collection also stretches across the globe to encompass new War Memorials situated in Perth, Australia and the Province of Saskatchewan in Canada. Fully searchable by name, researchers can read transcriptions and see images of the dedications that commemorate soldiers who have fallen in the Boer War, WW1 and various other conflicts. 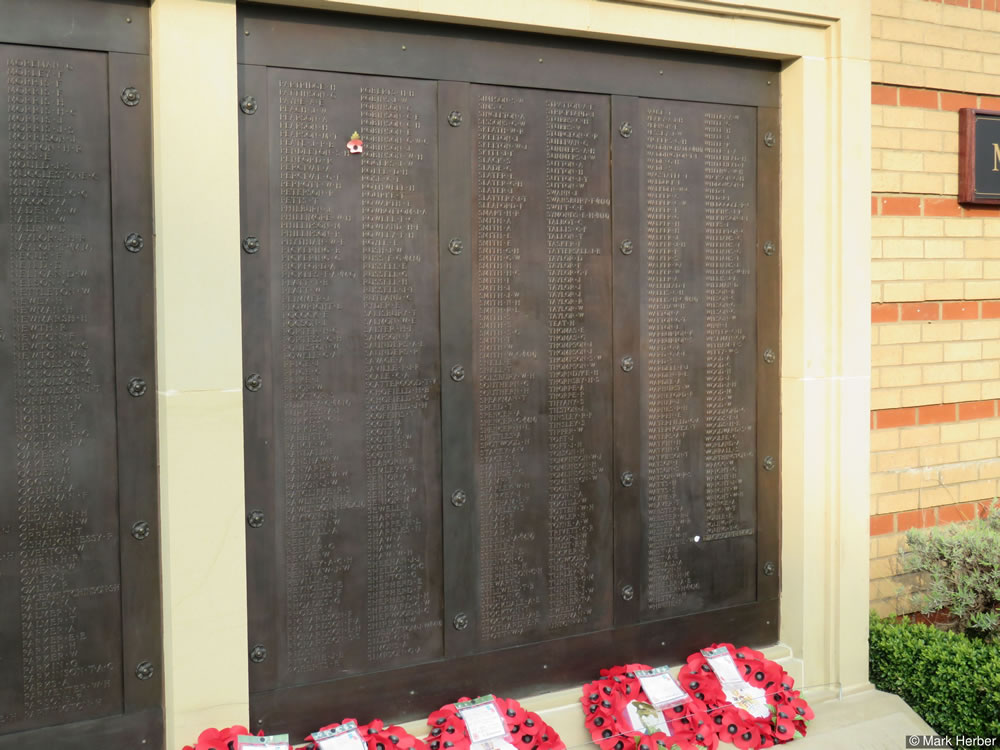