Charles Dance - Who Do You Think You Are?

A secret family and a tragic accident...

Famous for his roles in The Jewel in The Crown and Game of Thrones, Charles Dance is the first celebrity to have his family's past researched and revealed in the opening programme of the 14th UK series of Who Do You Think You Are?

Birth of Charles in the birth indexes on TheGenealogist for 1946

Born as Walter Charles Dance to Walter Dance and Eleanor Perks in the Bromsgrove district of Worcestershire in 1946, his father was to die just three years later. Charles has always believed that his dad had been in his early fifties when he died - but now that has been called into question. As we can see from the death index found on TheGenealogist, the age recorded on Walter's death certificate shows clearly that he was actually some 25 years older when he passed away.

Charles had known that his father had been married before he had met his mother. By using the marriage records on TheGenealogist we are able to discover that Walter's first wife was Louie Rowley Morris and that this wedding took place in The Strand district of London in the last quarter of 1897.

What Charles had been completely unaware of was that the marriage had brought two daughters into the world. Finding out that he had two half sisters, Norah born in 1898 and Mary born 1903, was quite an emotional experience for Charles. This displays a very different side to Charles from what we are used to seeing in his onscreen roles of stern officials and sinister villains.

Delving more into his father's past we discover that Walter had a military background. The photograph that Charles had seen before of Walter in uniform was not taken in the First World War as he had once believed - it turned out to be from the Boer War, at the outbreak of which Walter had signed up on 'Short Service' and went out to fight in South Africa. 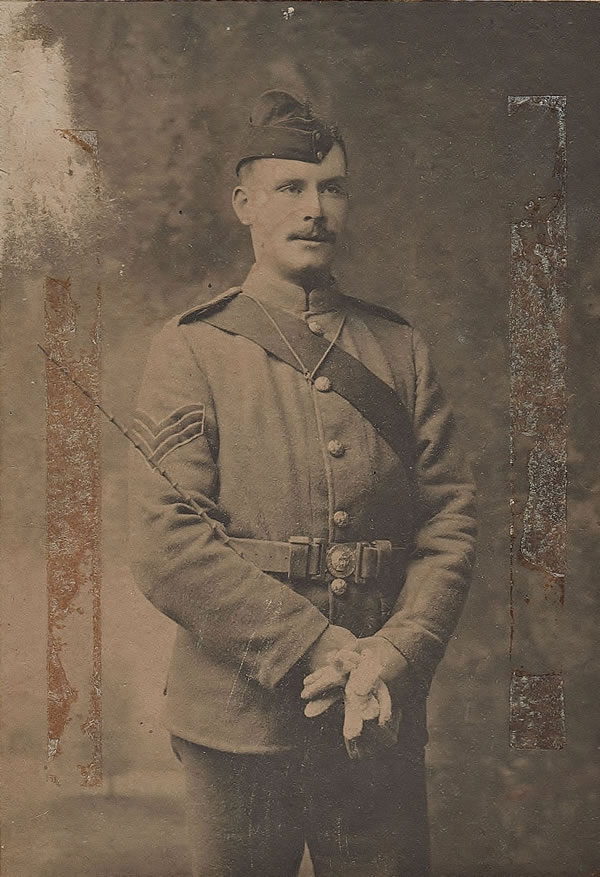 Returning the focus of the research back to Walter and Louie's family, Charles is shocked to discover that his half sister Mary had died at a terribly early age. The cause of death was a tragic accident that took place at a building site when Mary was just five years old, and in the Who Do You Think You Are? programme Charles goes to the home where she died in order to pay his respects. Charles Dance's other half sister Norah married a South African in 1921 and so she emigrated to her husband's native country. In 1924 they were followed by her parents, who we can discover in the BT27 Outbound Passenger Lists on TheGenealogist. So it was that Walter returned to South Africa where he had once fought - but this time he was accompanied by his wife Louie as they sought to be closer to their grandchildren. 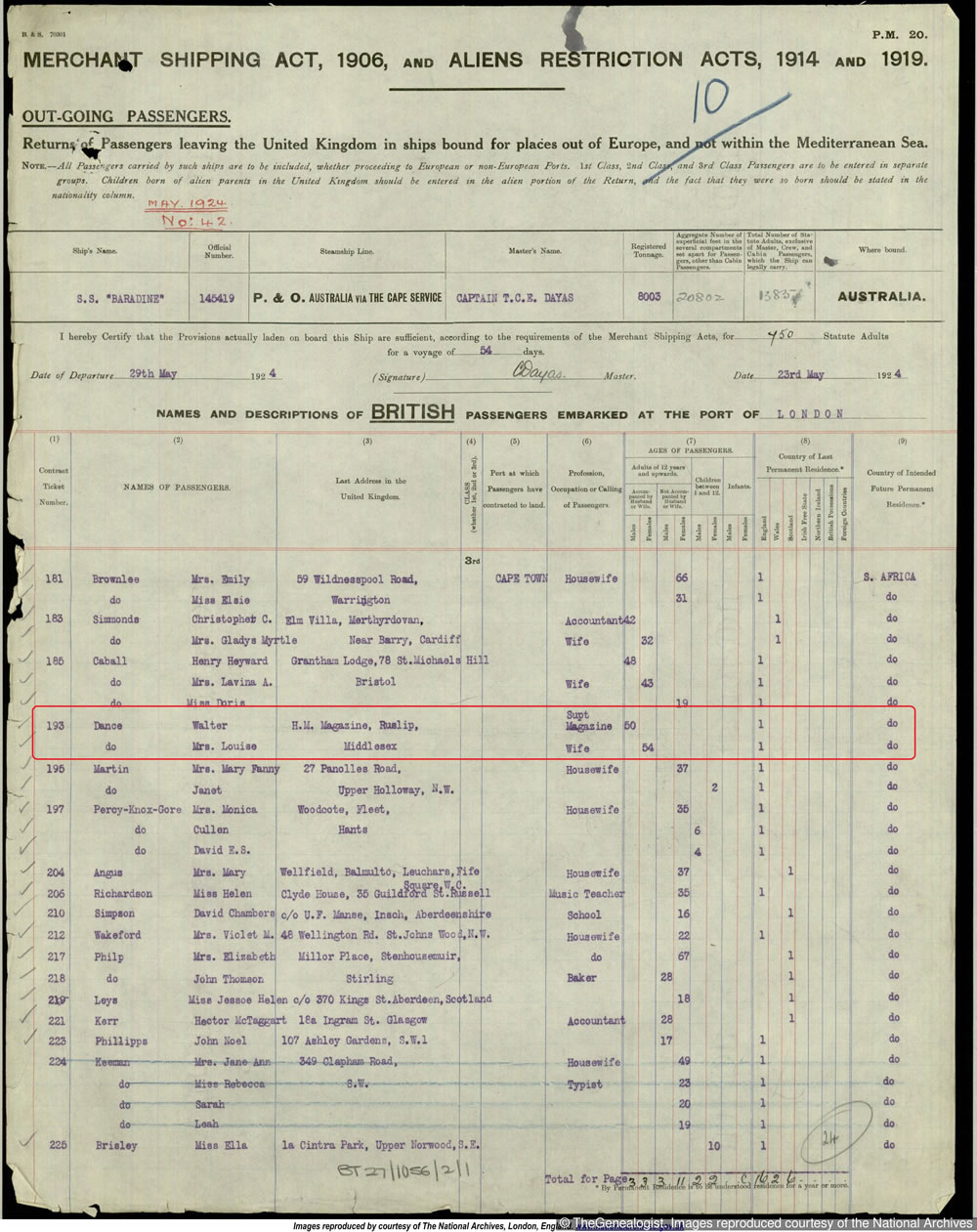 Walter and his first wife en route to South Africa 1924

They were to come back home to the U.K. when Walter fell ill. Shortly after their return in 1932, however, it was Louie who died - as can be found in the death records on TheGenealogist. Using the marriage records on TheGenealogist we can then go on to find Walter marrying Charles's mother Eleanor in 1938 within the Islington district of London. This marriage may have been the cause of a family rift that meant that Charles knew nothing about his elder half sister and never met her before she died in South Africa in the 1990s. After Charles's father died, his mother remarried the next year to Harold Burfield in Bromsgrove.

Charles Dance has very often been cast in a posh or aristocratic role in his acting career. Despite this he has no delusions of grandeur as he knew that his mother was from humble stock.

"There's nothing aristocratic about me – at all" he said, explaining in the TV programme that his mother was a servant from below stairs who started work from the age of 13. In a meeting with his elder brother Michael, who is 10 years older than him, they recall that their mother was very good at keeping secrets. One of the skeletons that was in the family cupboard was that the two brothers had different fathers - something that she only revealed later in her life. Michael is able to provide Charles with the names of their maternal grandparents and these were James Perks and Marion Gold. From the 1901 Hackney census on TheGenealogist we can find Marion in her parent's household where their occupations were that of a laundryman and laundress. 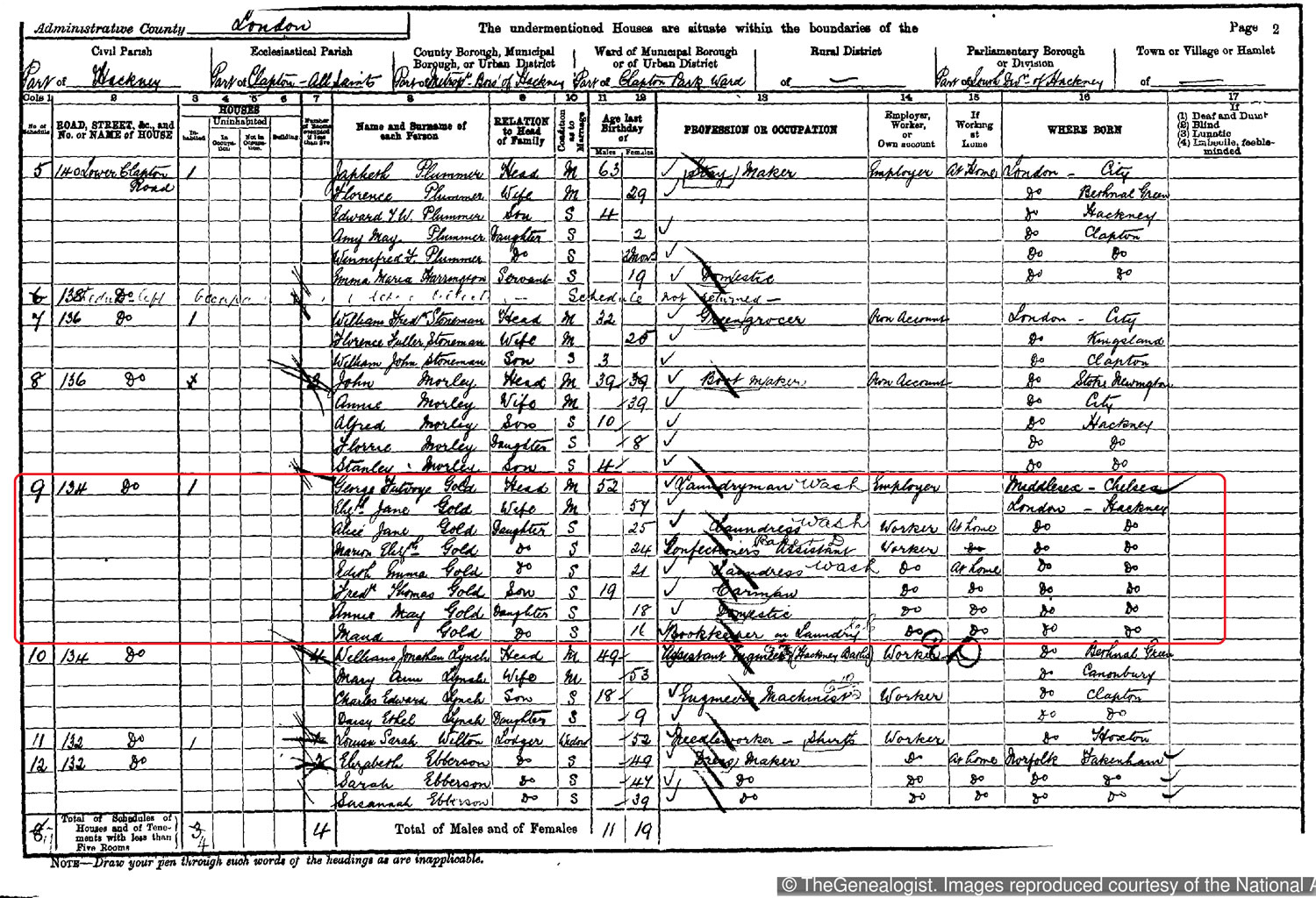 This information points researchers to London's East End and at the Bishopsgate Institute, Charles is able to find out more about his Gold line in his family tree. This reveals that despite each of his great grandparents being married to other people, George Gold and Emma Futvoye had seven children together, including Charles' great grandfather. This fascinates Charles:

"Struth! Well, it's all very furtive and very secretive, isn't it? I mean how do you live with a secret like that?"

The unusual name of Futvoye takes Charles to see a family archive in Derbyshire dedicated to the Futvoye family line. It is there that it is revealed to him that the name originated in the town of Spa in Belgium and that Emma came from a well-educated and artistic family. We can find within the Newspaper and Magazine collections on TheGenealogist the death announcement in The Illustrated London News for the 7th August 1847 of Charles Francis Futvoye, artist, in his 71st year.

The Illustrated London News for the 7th August 1847

This was Charles's great grandfather, Charles François Futvoye. The actor is then shown a portrait of his three times great grandmother that is startlingly familiar.

"I could see so many features in her face that reminded me of my face, in fact she looked a bit like me in drag, and I could also see a resemblance to my mother too."

Next on Charles's travels is a visit to the Fitzwilliam Museum in Cambridge, that keeps a piece of work by Charles François Futvoye. What he discovers there is a very different style of painting; a "Chinese" design, and he sees a purchase-order for vast numbers of artist brushes which suggests that his ancestor was not an ordinary artist. In the TV programme we see Charles visiting Claydon House in Buckinghamshire where an extraordinarily decorated room reveals that Charles François was both a skilled artist and a good businessman. The 19th century saw the Chinoiserie style of interior decoration come into vogue and from his workshop on Marylebone High Street in London, Charles Futvoye taught the well heeled members of society the art of emulating the techniques that had been inspired by trade with the Far East.

The question that Charles wants to discover the answer to is why the Futvoye family left Spa, in Belgium, in 1791. At the time it had been frequented by many of the Continent's aristocrats in their quest to take the health-giving properties of its natural spring waters – as such it was a natural place for the Futvoye family to attract upper-class clientele for their wares. Charles says on screen:

"It sounds like a pretty lively place; the Vegas of Europe"

But the reason for his family to leave is that the Utopia did not last when the tide of revolution swept across Europe. Charles is able to discover that on seeking sanctuary in Britain his four times great grandfather, Matthieu Futvoye, was soon schooling members of the British royal family in the decorative arts.

Charles is astonished that tracing his maternal family history has taken him from his mother's domestic service in the East End to ancestors living in well-heeled Marylebone and moving in high society.

"We've come a long, long way from where I thought we would be going to find out about my mother"

The research into Charles Dance's family has enabled the actor to discover that his father was a much older man than he had previously thought and that he had fought in the Boer War. Charles was shocked to find out that he had two half sisters that he was not previously aware of - and was sad to find out that both were dead and that indeed that one had died in a terrible accident. Meanwhile his mother's branch of his family tree turned out to be a surprise when he unearthed that he had ancestors who had moved easily amongst those above the stairs after he had assumed that his family were all from below. 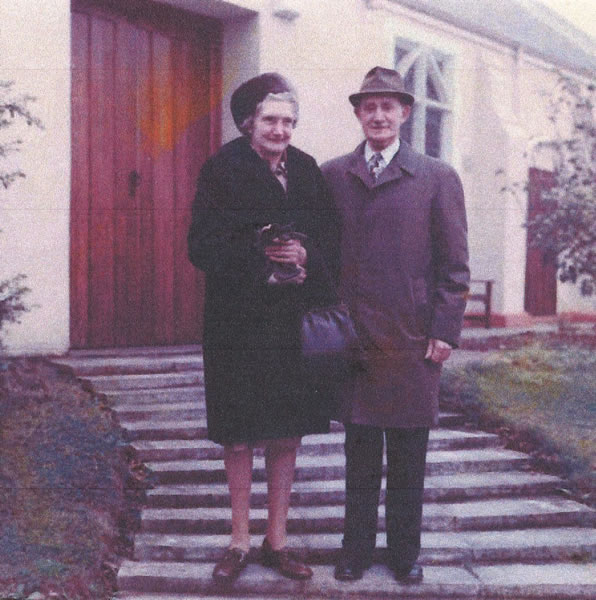 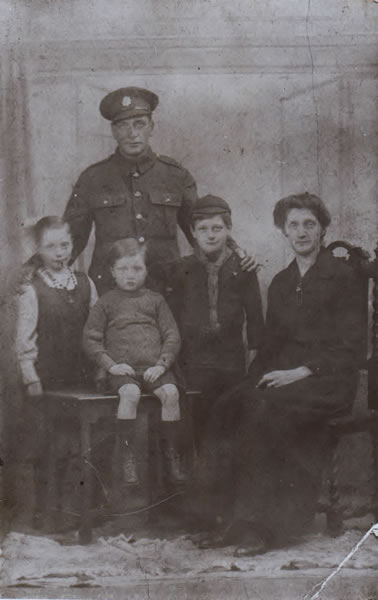 Charles Dance's Mother Eleanor (L) as a child with her parents, James and Marion Perks, and her two siblings.

Sources:
Press Information from IJPR on behalf of the programme makers Wall to Wall Media
Extra research and record images from within TheGenealogist
BBC Images