Sir Ian McKellen - Who Do You Think You Are?

The famous actor knight discovers that he was not the only person in his family to have trodden the boards.

Famous British actor Sir Ian Murray McKellen was born in Burnley, Lancashire on the 25 May, 1939. He has a mixture of Northern Irish and Scottish forbears on his father's side while his mother, Margery, is of English ancestry. Sir Ian's father was, Denis Murray McKellen (1905-1964), who was born in Stockport, Cheshire and we can find the birth index for him from a search of TheGenealogist's Birth and Baptisms records. The actor's own birth is slightly more difficult to find as it has been misrecorded in the Index for the April-June quarter 1939, by the General Register Office, under the surname McKellar. 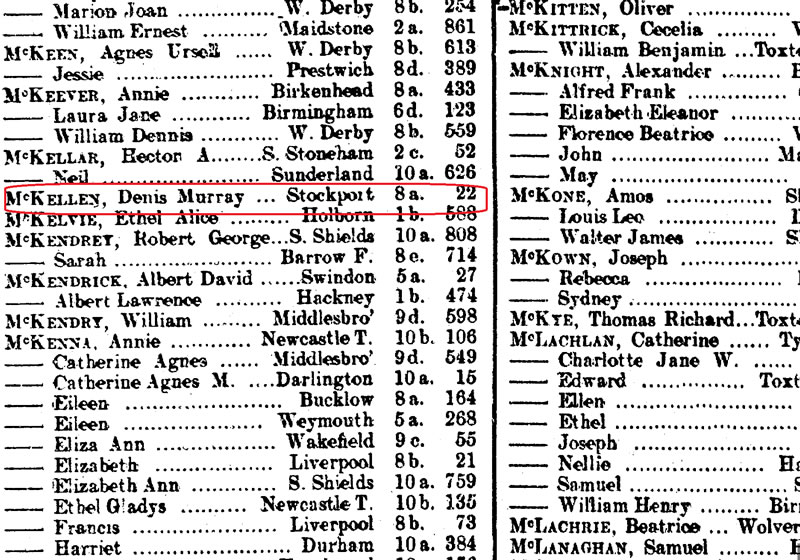 Sir Ian's father Denis Murray McKellen was born Stockport 1905, as found in the indexes on TheGenealogist

"Now I'm the last of the McKellens, the last of my line... I'm just left with some photographs really. And there's no one left for me to ask about them." 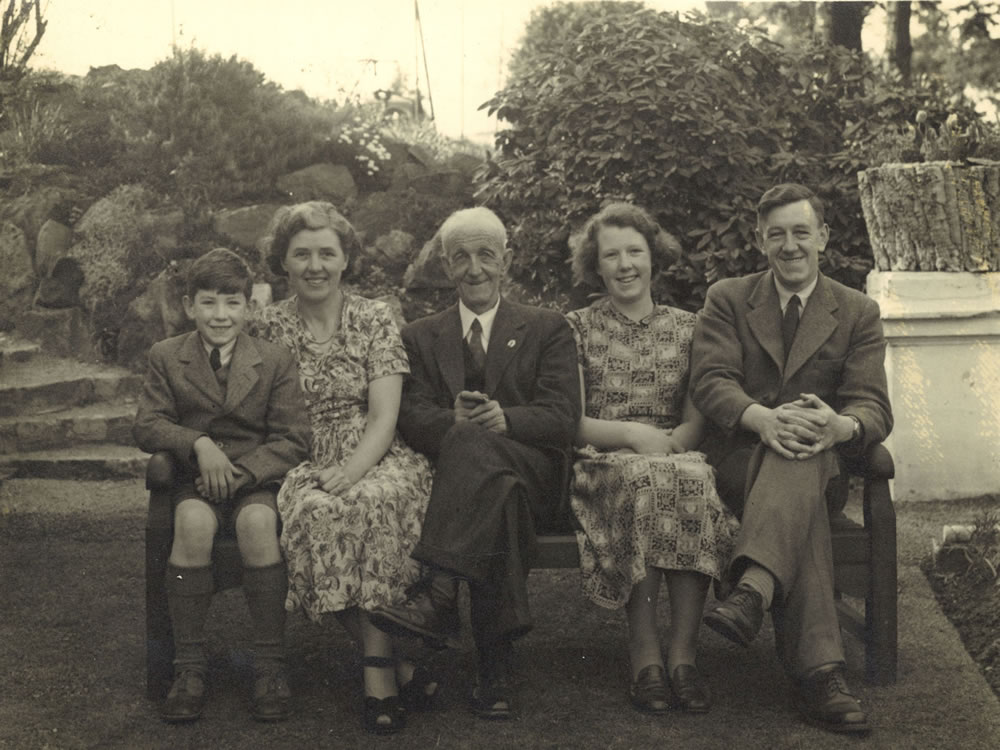 Sir Ian's paternal grandparents were William Henry McKellen and Alice Beatrice Murray whose marriage can be found in the records at TheGenealogist at Barton-on Irwell, Salford. Alice was born in Scotland in 1881 and it is her that Sir Ian is most interested in discovering more about. Alice McKellen was also known as Mother Mac and the programme, on BBC 1, reveals that Mother Mac sang a solo at the Free Trade Hall in Manchester, in front of thousands of people. 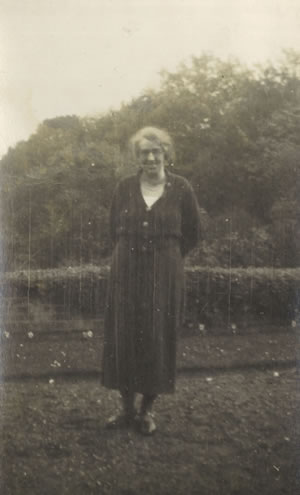 Sir Ian's mother, Margery Sutclifffe, we can find was born in 1905 in Salford and she and Sir Ian's father, Denis, married in 1931 in Stockport, Cheshire as can easily be discovered using the records on TheGenealogist.

A search of the 1911 census now finds a young Denis aged 5 in his parent's seven roomed house in Romiley Cheshire. Sir Ian's grandfather is a 41 year old Engineer (Estimator) for Gas Engine Makers and his grandmother (Mother Mac) is 31 at the time. 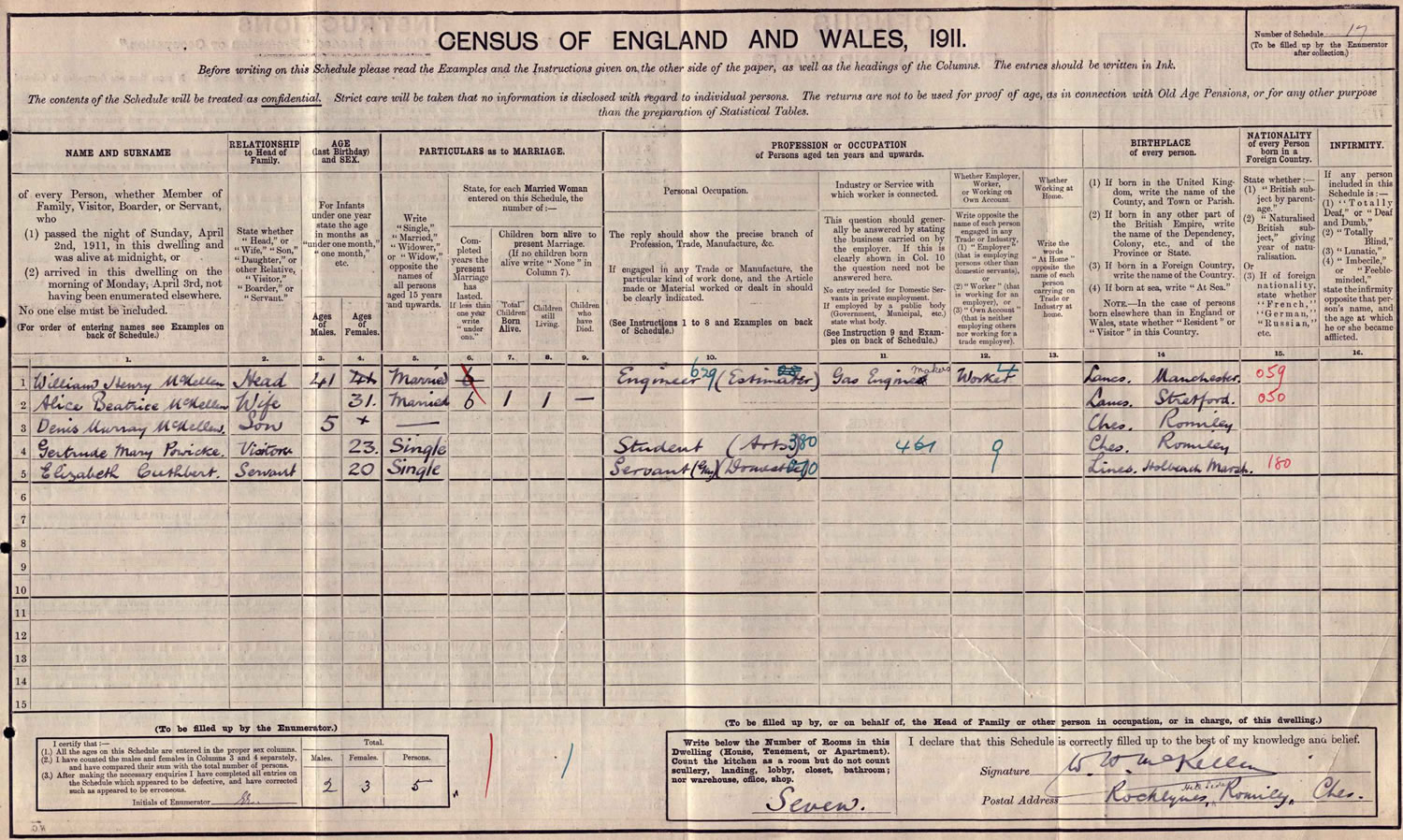 Using the Trade, Residential and Telephone directories on TheGenealogist we can find William Henry McKellen in the residential listing for 1923 in the Kelly's Directory of Cheshire and then, moving forward to 1937, we discover Denis, Sir Ian's father, in the Directory of Burnley and District 1937. This shows us that he was a Chartered Civil Engineer living at 15 Westhouse Avenue. 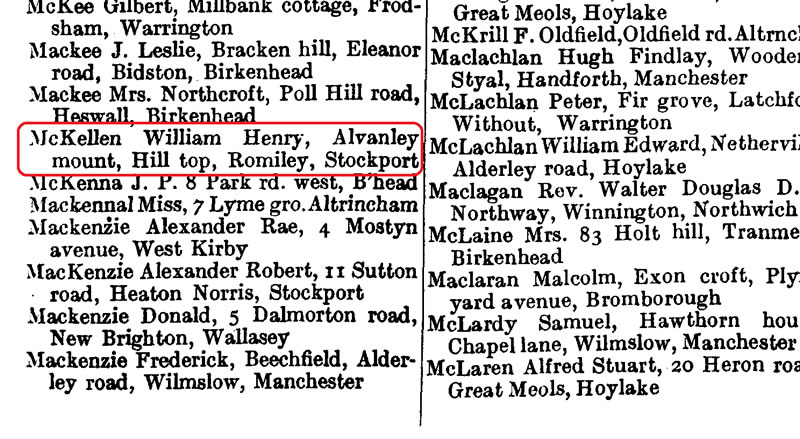 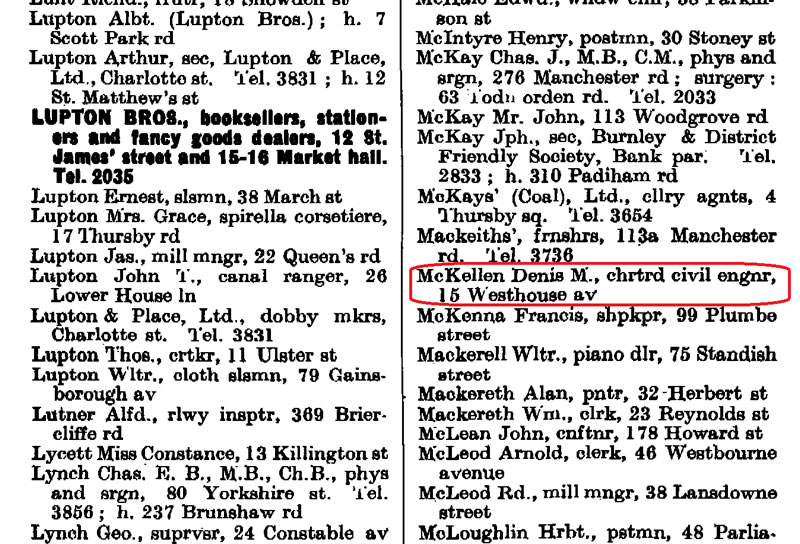 Sir Ian is then fascinated to learn that his grandmother, Alice (Mother Mac), wasn't the only performer in his family tree. To his shock, he hears about another actor in his lineage – Frank Lowes, who was Alice McKellen's uncle.

Using TheGenealogist census records we can find Frank Lowes in Manchester's Moss Side in the 1871 census enumerated as an actor. By the 1891 he and his wife are found in the census in Wavertree in Liverpool. 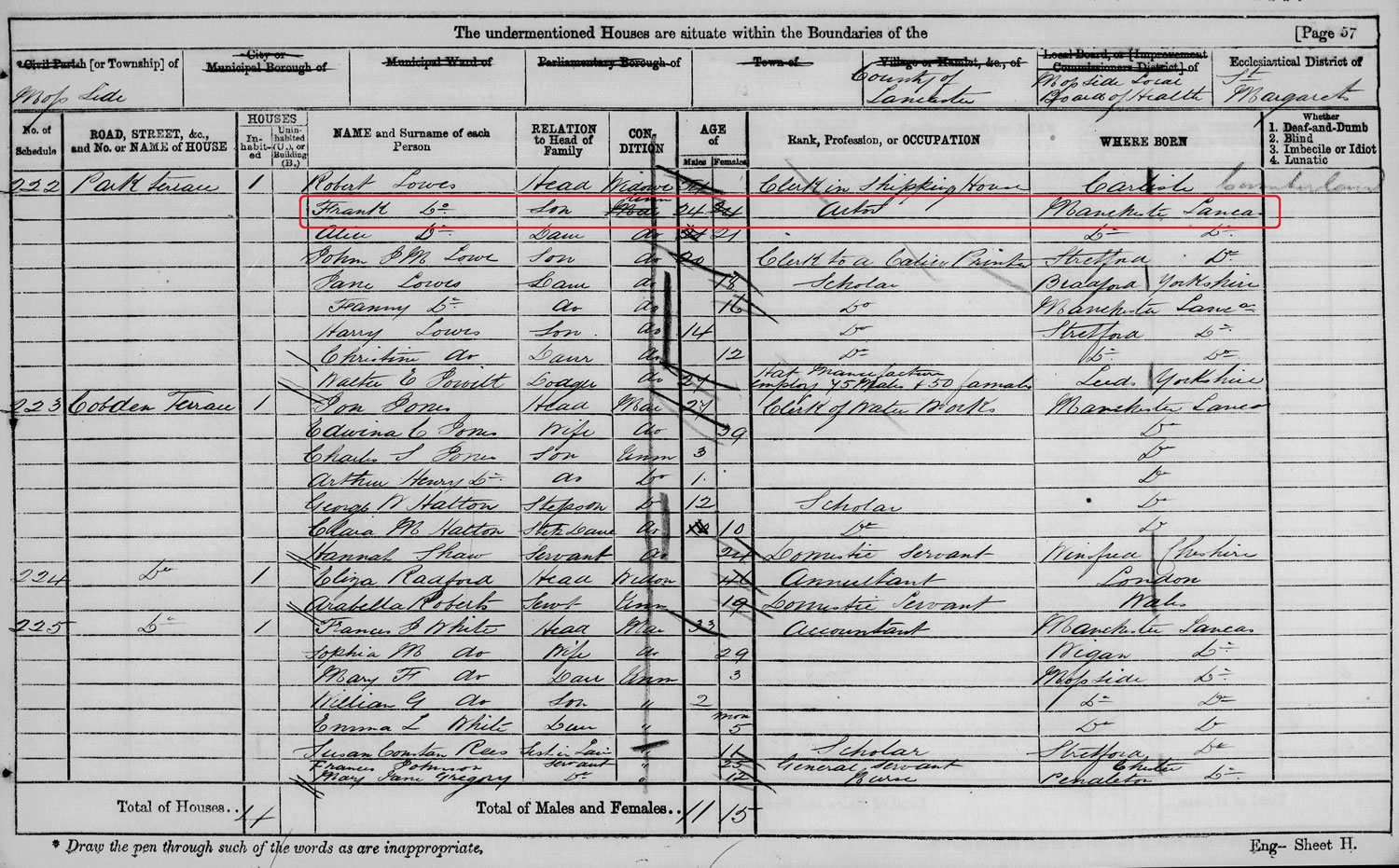 "To discover that her uncle Frank, her mother's elder brother, Frank Lowes, is down in the census as an actor! ...But where was he acting? What was he acting?"

Sir Ian learns that research into Frank Lowes' career finds that he moved from Manchester to Bolton and then to Liverpool. Though Frank started his career during the theatrical boom in Manchester, Sir Ian is happy when he discovers that his ancestor's big break happened in Bolton, where he himself had spent his youth.

Unfortunately, it is also in Bolton that circumstances see a change in Frank Lowes' career. After his theatrical patron immigrated to America, Frank began to struggle to find quality acting jobs.

"However successful or unsuccessful Frank was, I do like the idea that he contributed to the gaiety of things by being in a show, and touring round, bringing entertainment to people. That's what my mother apparently said; if Ian decides to be an actor, it's a good job because it brings pleasure to people."

The trail leads Sir Ian to Liverpool. Sadly the news is not good as Frank Lowes's life ended in the workhouse after a few years performing in music halls. This unsettling fact has caused Sir Ian to reflect on just how insecure an actor's life is, this being something that he and his friends in the acting profession know all too well.

Pleased to have found a thespian in his family Sir Ian is keen to discover more about Frank's father, Robert, whom we can see on the 1871 census above was a 'Clerk in a Shipping House'. Sir Ian, who is known for his campaigning work for Gay rights, is pleased to find out that his ancestor Robert Lowes had a part to play in the growing radicalism in the North of England. Driven by what were the appalling working conditions in the factories, the warehouse clerk campaigned for social change by pressing the employers for a half day off work each week, for the warehousemen, in addition to their entitlement to the day off on a Sunday. Robert and his fellow campaigners were successful in their aim. The workers managed to convince the merchants of Manchester to grant the half-holiday.

In the television programme Sir Ian is seen to be very proud to have found that Robert Lowes made a difference to the horrendous working conditions of the time – and this is especially so when he finds out that his ancestor's campaign has had a domino effect across the country. It could be said that Robert Lowes was the "grandfather of the weekend."

Tragically, Robert Lowes died of emphysema aged 56 and in straitened circumstances. Sir Ian is proud of his great, great, grandfather, knowing all too well the struggles of campaigning from his own experience.

"You have to admire Robert's achievements...What I had always hoped was true about the McKellens and people they married was an attitude to life, doing good and helping other people...This bright radical thinking clerk stood up and changed the world."

Sir Ian Mckellen found the research into his family a positive experience saying:

"I do feel that I can almost touch these people. I feel happy in their company... It doesn't really matter to me that I am the last of the McKellens. But I do feel a little bit more secure as a person. Yes I think I'll probably never be quite the same."