Warwick Davis - Who Do You Think You Are?

Warwick Ashley Davis is an English actor, television presenter, writer, director, producer and comedian who was born on the 3rd of February 1970 in Epsom, Surrey. He is well known for his roles in the Star Wars and Harry Potter films.

"I'd like people in my history to be a little bit maverick… For me it's about finding ordinary people who sometimes end up having done extraordinary things. Bring it on. Let's have an adventure!"

Warwick's parents are Ashley Davis and Susan J Pain and it is his mother's side that he begins his family quest. Susan is the daughter of Winifred Durban and Walter Pain. Frederick Durban, his maternal great great grandfather, worked for the General Post Office in Kent and a search of census records and marriage certificates reveals some curious entries that raise various questions for trying to draw up Warwick's family tree. Firstly, were Frederick's parents married? Frederick's father, also named Frederick, appears in the census records as a newsagent born around 1806 (give or take a few years depending on which census we look at). But the search reveals that Frederick Durban Senior, appears in the census twice - once at 106 High Street in Croydon and also at 5 Horrocks Row, Greenwich, Deptford. 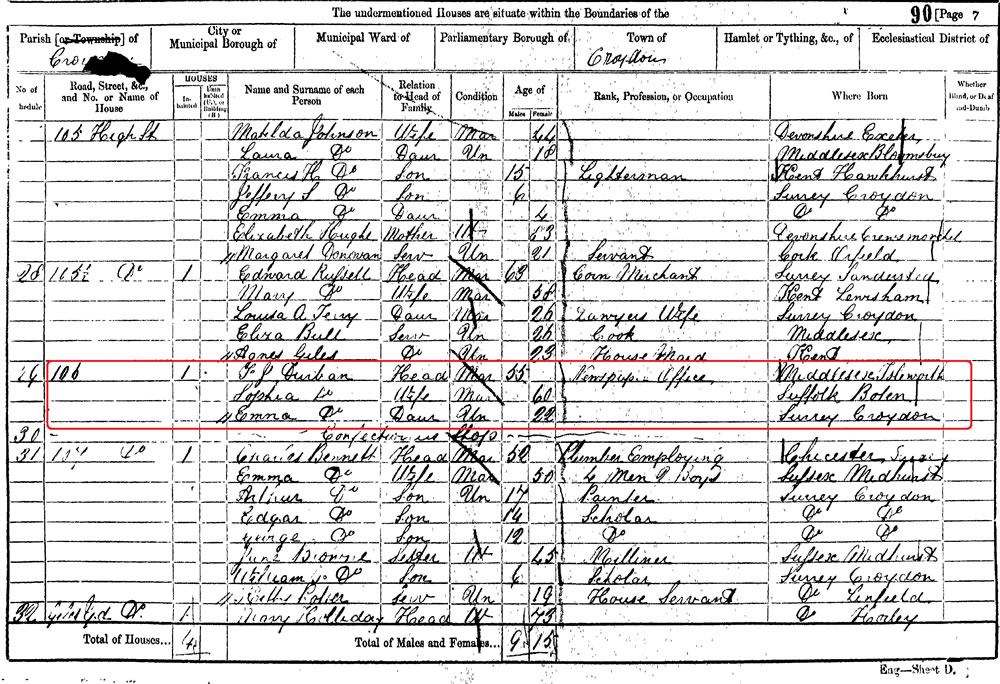 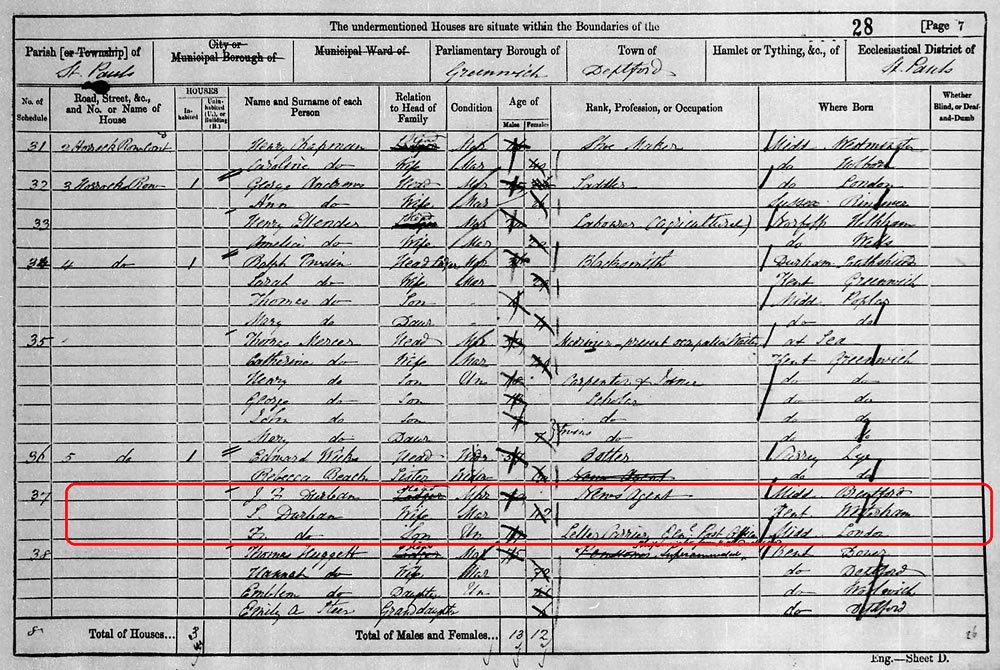 It would seem, from the research, that the wife in Croydon, Sophia, was Frederick's first wife and so that raises the question of the legitimacy of Frederick Jr, whose mother was called Sarah King. Frederick Jnr was born in 1842 and his parents only married in 1870. For the Deptford census they passed themselves off as man and wife and their son used his father's surname of Durban - but a search for his birth reveals he was registered in the City of London in 1841 as Frederick King, middle name Durban!

Birth of Frederick Durban King in the GRO indexes for July-September quarter, 1841, City of London district

We can see that Warwick's ancestor had two families - one of which was in Croydon, with his wife Sophia Durban. Sophia, we note from the 1861 census, had been born in Suffolk and she passed away in 1870. The other 1861 census is for Deptford where his claimed wife is identified with only the initial 'S' Durban, but this lady is from Kent and turns out to be Sarah King - it is she who is the 2 x great grandmother of Warwick.

This family situation is a phenomena of the strict Victorian times where divorce was almost impossible and so men like Frederick Durban Senior would have lived double lives. If they married their lover they risked prosecution and prison for bigamy. In this case, however, after his first wife Sophia died in the second quarter of 1870, Frederick Snr and Sarah King married in Croydon during the last quarter of that year and she moved from Deptford to his house in Croydon. This we can tell as in the next census she is found living at 106 High Street, Croydon. Unfortunately for the newlyweds, their legal marriage together lasts only a few years as Frederick John Durban himself died in the last quarter of 1873 in Croydon.

Marriage of Frederick John Durban to Sophia King in 1870

Warwick is philosophical about what he learns and weighs up how his ancestor's choices had an impact on him.

"Frederick Senior is a bit of a rascal… I was surprised that he did also marry Sarah – but imagine if he hadn't met her? I wouldn't be here. That's what all of this is about at the end of the day, how I became me and am here today"

Warwick continues exploring Frederick Senior's life and finds out that his double life led to financial ruin for the newsagent. Despite this, Warwick is pleased to find out that his ancestor Frederick Senior acknowledged all of his children equally in his will. Warwick reconsiders his opinion of the man, who tried his best to do the right thing even in tough circumstances.

When he turns to look at his father's side of the family, Warwick begins with his great grandfather Dennis John Manning, whose life is a mystery to the family. In South London, Warwick learns of the sad story of the death of Dennis's infant son. By using a combination of birth and death records, on TheGenealogist, we too are able to find both the birth and death of a child called Dennis John R Manning. The boy appears in the birth records of the Jul-Sep quarter for 1903, and then in the death records of the Apr-Jun quarter for 1904. This shows us that he died before his first birthday and both records are in the Lambeth district of London. In the Who Do You Think You Are? episode Warwick contemplates how the family would have dealt with such a sad occurrence.

"I feel I know a little bit more about Dennis. I also feel a certain affinity towards the man because like me he lost a baby son… I do feel a connection with him now." 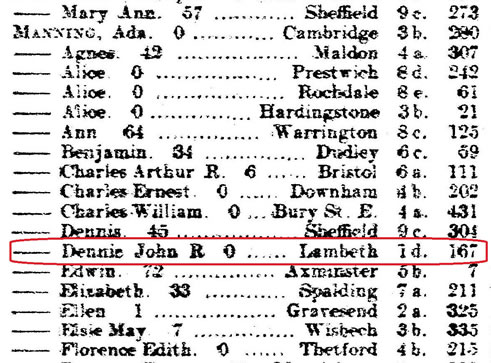 If we search the 1911 census records on TheGenealogist, we can find Dennis is a Wines and Spirits Cellarman. He, his wife Lucy, and their family are living at 76 Wincott Street, Kennington Road in Lambeth. In the show, the research into Dennis's career shows that during the First World War he was a munitions worker at Woolwich. Working with these explosive chemicals was a dangerous occupation and the conditions were tough. From the death records we are able to see that Dennis Manning died in the Godstone district of Surrey, in 1918, at the age of just 46. Godstone covers the area of Warlingham, the location of Croydon Mental Hospital. When Warwick discovers that Dennis died at Croydon Mental Hospital he searches the hospital records, fearing the worst. Wondering if his ancestor's health problems were as a result of his time in the munitions factory, Warwick is shocked when the records reveal that Dennis's illness was not caused by his job, but rather by the fact that he had syphilis.

"My Nan Edith was only six years old when he died a tragic death. And I think this gives us the answer as to why she didn't know her father. I think there would have been a certain amount of shame associated with a relative being in an asylum, so it probably wouldn't have really been talked about, which is really sad. And it's sad that I can't tell my Nan, because she's no longer here."

Determined to find a happier ending, Warwick chases up the Irish connection he has heard about from his father. He finds that his great great great grandparents Owen and Margaret Manning, moved to London from Ireland. The Mannings came to London to make a better life for themselves and to educate their children. 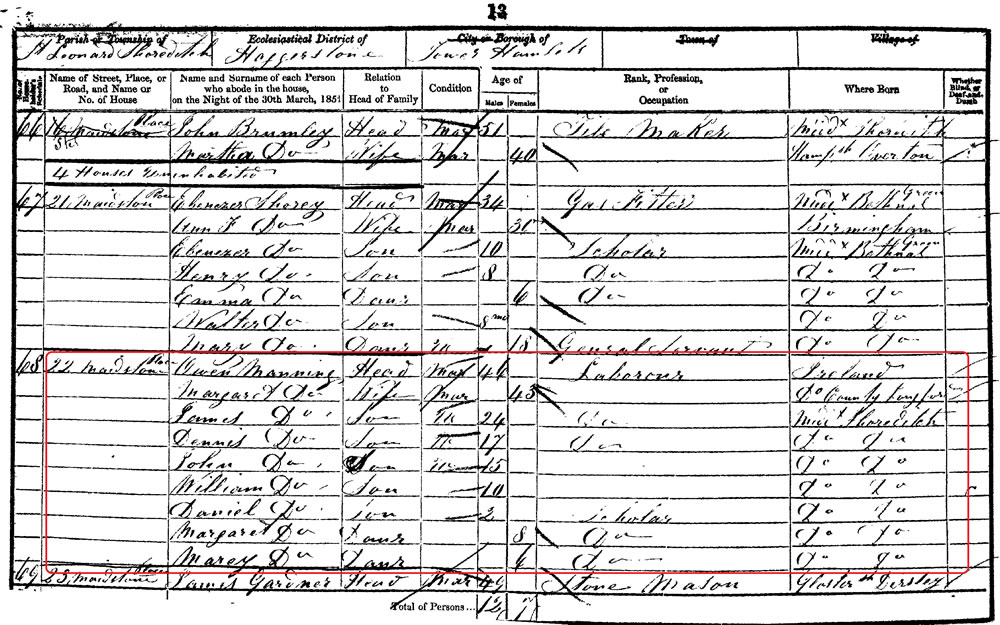 Owen and Margaret Manning Shoreditch 1851 who came from Ireland

Looking more closely at one of their children, Dennis Manning (the father of Dennis John Manning, who died in Croydon), Warwick discovers something extraordinary: there's another performer in his past family! This Dennis turns out to be a violinist, playing with "Pell's American Opera Troupe".

From the 1881 census of Hackney we can see Dennis the musician and his sons aged 9 and 7. 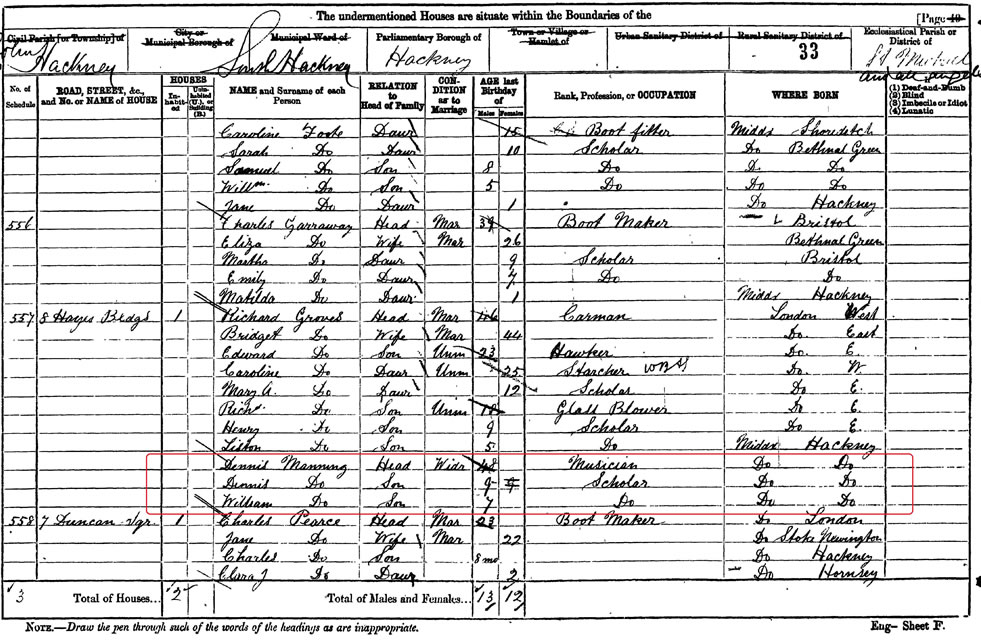 Dennis the musician and his sons in the 1881 Census

The TV show takes Warwick to The Athenaeum in Bury St Edmunds to find out more about the troupe. Pell's Opera Troupe was in fact a minstrel group from America, who performed what was in the 1850s considered to be a respectable family entertainment – albeit in black face. Warwick tries to reconcile his modern-day dismay at this with the realities of the 19th century.

"It was a bit of a shock when I first discovered exactly the sort of musician that Dennis was. I don't really know quite how to feel about it. On one hand it kind of amuses me… that's what it was back then. But on the other hand, I'm slightly horrified by it."

"Bigamy, syphilis, blacking up as a minstrel. It's quite a variety of ancestry."

Warwick unearths some possible musical links between the music from Dennis's Irish ancestry and the parody of African American music he later performed. It seems that in New York, black Americans and poor Irish immigrants would have lived side-by-side. Warwick hears this proximity was reflected in the type of music Dennis played, and even has the opportunity to sing along. Unfortunately Dennis died in reduced circumstances. Warwick reflects on his ancestor's end, and the insecurity of a performer's life.

"His story was inspiring and enjoyable, but kind of ended too soon… You can never take this business for granted, and you have to have a plan B. Dennis, I don't think, had a plan B."

In Bury St Edmunds Warwick walks in his ancestor's footsteps in the ballroom that Dennis had performed in 150 years earlier. He thinks about the hidden stories he has managed to uncover, and wonders about what his ancestors would have thought about his discoveries.

"Part of me feels slightly guilty…I'm sort of imagining my ancestors looking down saying: who do you think you are, unearthing all our secrets, telling the world?"

But Warwick admires and recognised the fight and determination that all his ancestors possessed.

"So I've got a great deal of respect for all the people in the stories that I've told."