Find out more about your Yorkshire ancestors

To coincide with the York Family History Fair in June, TheGenealogist has added the colour tithe maps that encompass the City of York to its National Tithe Records collection and detailed directories covering both early and later records.

The Tithe maps already cover all of the available gray scale maps and accompanying apportionment books for England and Wales and now include the colour maps for York City and Ainsty as well. With Tithe records you can find the plots of land that were owned or occupied by ancestors in the Victorian period and so this can help you see where your forebears lived, farmed or perhaps had a small cottage. 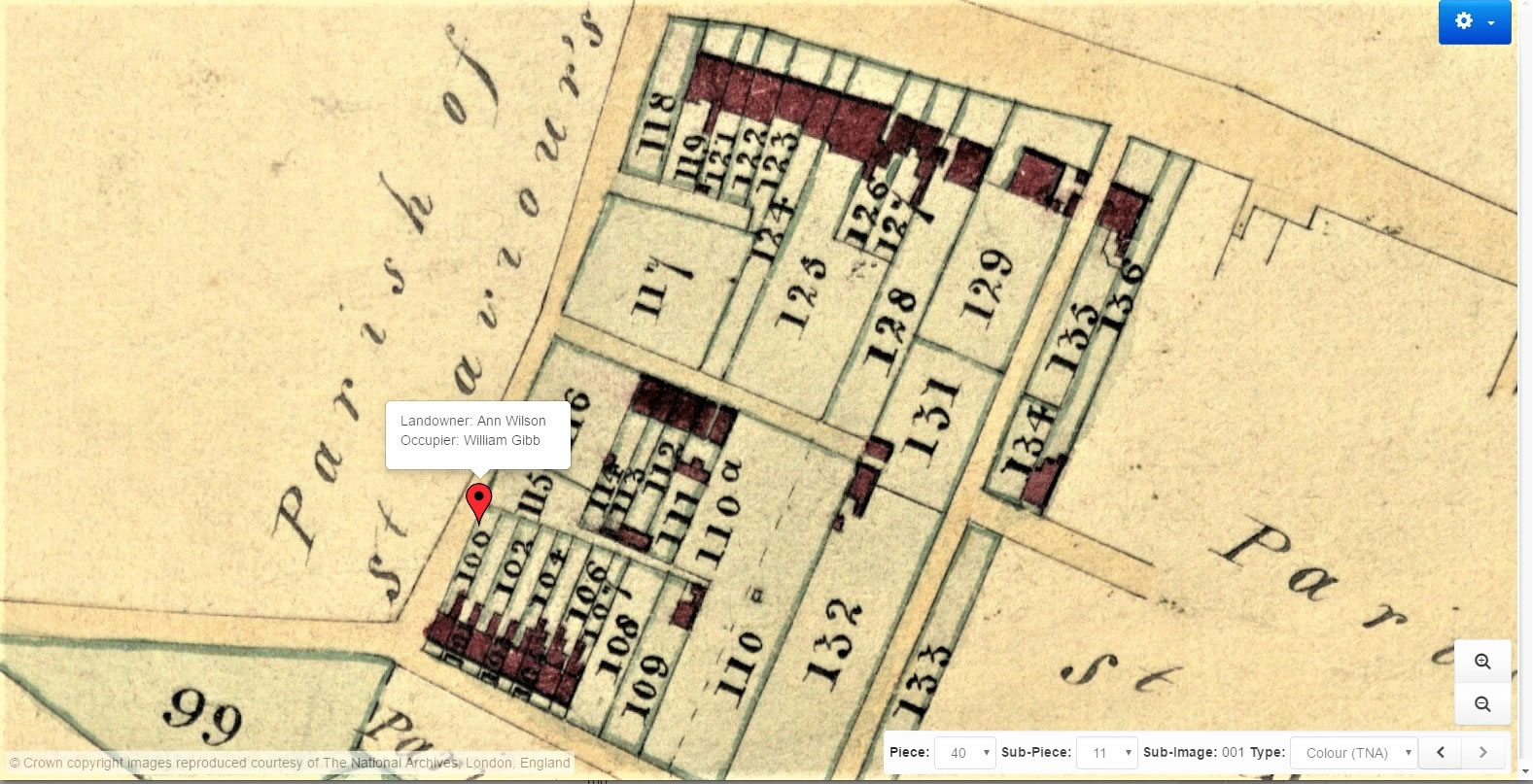 For example, if we wanted to find the plot where one William Gibb lived in the parish of St Cuthbert during 1845 we can do this by selecting Tithe & Landowner on TheGenealogist and then enter his name into the Master Search. In William's case he was the occupier while his landlady was Ann Wilson and we can see from the description in the Apportionment book that he rented a house and gardens from her. The value is small and the Rector is only entitled to 6d tithe rent from the plot. This is in contrast to another example that we can find in the York tithes.

In the light of The York Racecourse being the venue for the York Family History Fair, if we look for the owners and occupiers of part of the land on which the Racecourse sits we can see that it is both owned and occupied by The Freemen of Micklegate Ward of the City of York.

We are able to see an image of the apportionment book and this reveals in the description that the land is 'Part of Knavesmire a stinted pasture'.

A 'stint' or 'gait' being a pasture that is limited to a certain number of animals. A person who has the right to graze their sheep or cattle on the stinted pasture may allow a fixed number of their livestock to feed there. Each grazier holds a certain number of stints and a formula will be in force that calculates the different value of each type of livestock. So one stint could equal one ewe with her lamb, while four stints may equal one horse.

TheGenealogist's result shows us that this landholding was plot number 31 and this detail is extracted from the apportionment book. Clicking the icon for the accompanying map we can now see that the pasture is in the middle of the racecourse. 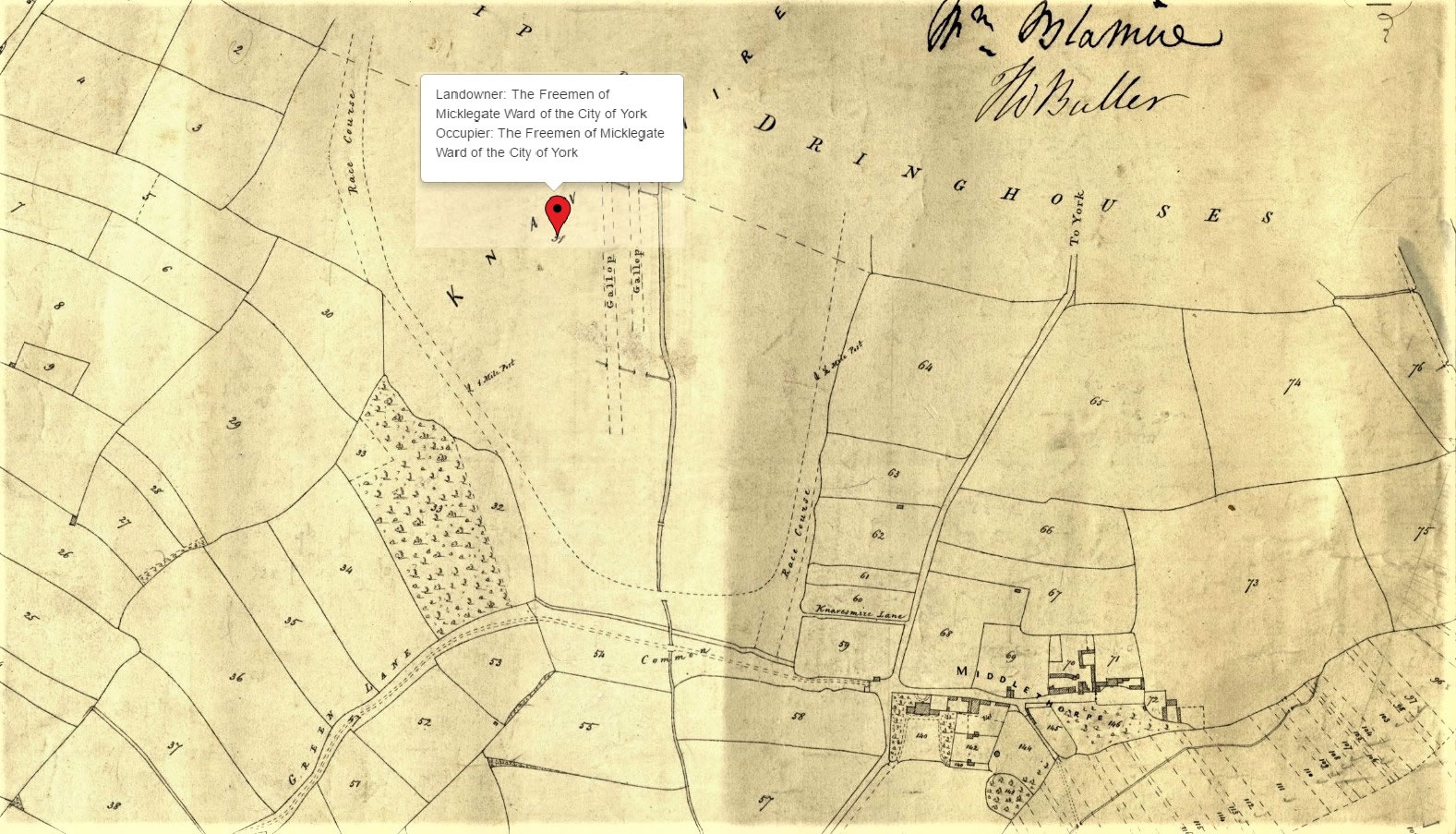 Anyone visiting the racecourse, whether it is for the family history show or to watch the races, can't help but notice the old Terry's Chocolate Factory next door. This art deco style facility, which no longer manufactures chocolate, was built in 1926. The company has, however, a long and rich history connected to York and by searching within one of the twenty three Yorkshire Trade, Residential and Telephone directories that have also been released by TheGenealogist this month, we can find the listing for the company. If an ancestor had a business then the commerical listings in the directory can help us find where they may have worked. In the 1897 Kelly's York Directory we can find Joseph Terry & Sons Limited, manufacturing confectioners and see that at that time they had factories at Clementhorpe and at St Helen's Square in York. The later address being where the family business had started and Clementhorpe was the factory on the River Ouse that allowed them to better distribute their products and import the raw materials - this move allowed Terry's to really take off as a confectioner. We can, likewise, find the competing company of H.J. Rowntree & Co. within the same directory. It shows us that Rowntree's had their business premises at Haxley Road and Tanner's Moat.

Directories can also be useful to find the addresses of residents, the railways that served the area and read about communications links to other towns. These may be of help to the family historian who has 'lost' an ancestor as they could suggest where a person may have travelled and can be a great compliment to a census record. In the case of a head of the household we may be able to find an address different from that recorded in the decennial census. This may help fill in the gaps of where a stray ancestor moved to between the census. It can also add to our understanding of the place where our ancestors lived.

Sir Joseph Terry had been the Lord Mayor of York and in the year of this directory, 1897, he is still listed as an alderman and a magistrate. Similarly, John Stephenson Rowntree had been a past Lord Mayor and he too was an alderman and magistrate in this year. The 1897 Kelly's York Directory reveals that they both lived at Mount Villas on The Mount; from this we can work out that they were close neighbours in York. The racecourse is also listed in this publication as having an address of Knavesmire, The Mount and so in the same area of the city. 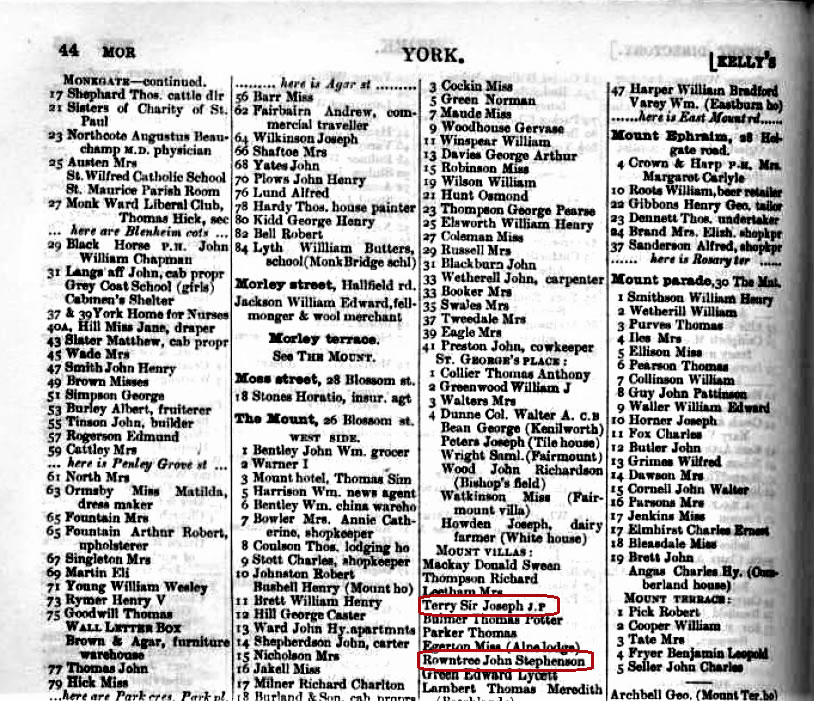 TheGenealogist's National Tithe Record Collection covers all counties of England and Wales and so can be used to find where your English and Welsh ancestors lived at the time that this great survey took place between 1837 and the mid 1850s. The Trade, Residential & Telephone directories also encompass the whole country and can be useful both as a research tool and as a valuable insight into the lives of our ancestors. They are a useful resource for tracing ancestors, particularly if they had a distinctive trade and can be used as a census substitute for the years prior to 1841 or after 1911 and also to provide information on their whereabouts between census years.