The addition of the 1940s decade of the BT27 outgoing passenger lists to those already on TheGenealogist introduces some intriguing ship's passages to research. Using these records researchers can find ancestors who may have braved not only the vagaries of the weather out at sea, but also the threat of the lurking German submarines. At the beginning of this period, The Battle of Britain had been raging in the skies and the threat of Nazi invasion caused the authorities to take the decision to evacuate thousands of children to Canada, Australia, New Zealand and South Africa for their safety.

Between July and September 1940 a government organisation, The Children's Overseas Reception Board (CORB), moved 2,664 children from Britain to escape the imminent threat of German invasion and the risk of enemy bombing. The 'Seaevacuees', as they were known, were only meant to be temporarily relocated for the period of the war, sailing on ships travelling in convoy for protection. Despite this precaution, however, two ships were unlucky and both the SS Volendam and SS City of Benares were torpedoed within a period of a couple of weeks. Happily all 320 children on board the first ship struck were rescued. Unfortunately the second didn't have such a good outcome.

The children onboard the City of Benares were not as lucky as those on the Volendam when their ship went down on its way to Canada. It was on the 18th September 1940 that 121 crew members and 134 passengers were lost. Of the ninety CORB children onboard, 77 of them drowned when the ship sunk. In the records released on TheGenealogist, we can find the passenger lists for the CORB's ill-fated sailing of the City of Benares which had departed for Canada on the 12th September 1940. Tragically amongst their pages are the names of those that lost their young lives as well as those who were rescued. Inevitably there are some names of siblings where one was lucky enough to be amongst the survivors, while the other lost their life. 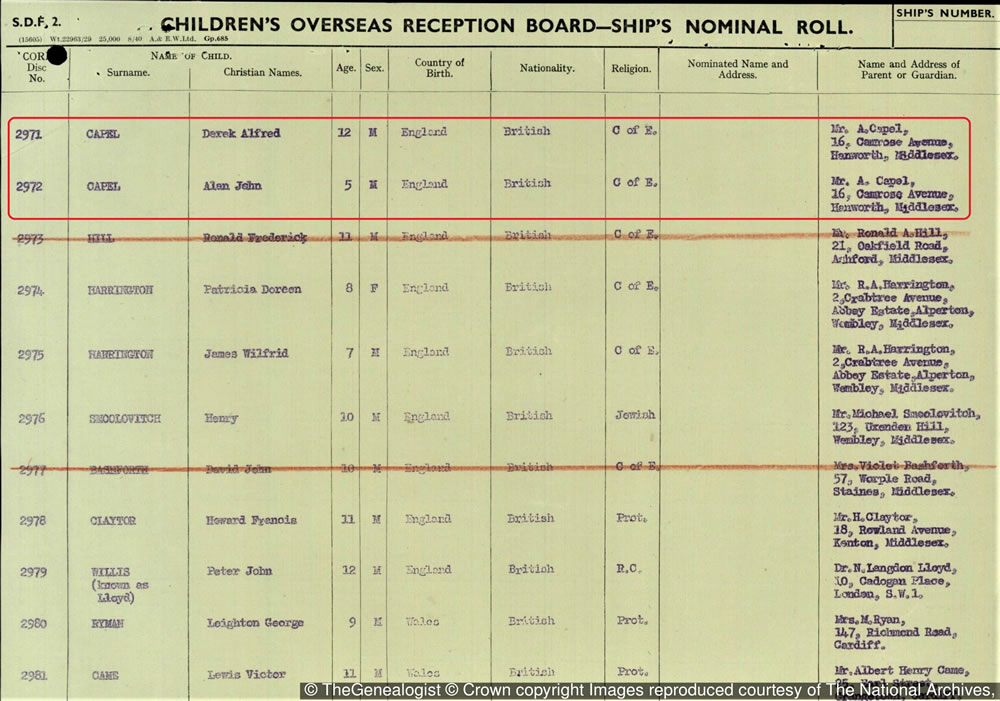 Two brothers in the passenger list for The Children's Overseas Reception Board children, onboard the City of Benares

The fury in Britain over the tragedy would cause the complete abandonment of the 'Seaevacuees' programme with people holding the Admiralty responsible for the way the convoy had been operated. The Germans put the blame on the British for sending children on these voyages and the British protested that children should not have become the victims of war.

While freighters may not have gone through much modification, many liners had been turned into troop carrying ships. This involved the luxurious accommodation being converted to cram in many more passengers than they normally conveyed in peacetime. Some better cabins were retained and made available for 'special passengers' - people that held permission to travel such as industrialists and government officials.

It was not just the liners, however, that played host to unusual passengers. In amongst this current passenger list release is the intriguing 14th March 1941 departure of a five and a half thousand ton, twelve year old, Dutch freighter named the MV Bodegraven. Leaving Newport in Monmouthshire, the sailing to New York had onboard what appears to be 40 male British government officials. Their ages ranged from 19 to the most senior being in their early 40s and their accommodation was in a mixture of 1st and 3rd class. Also sailing with them were 4 females. Under the occupation or calling column the ladies are enigmatically recorded as 'Models'.

None of these travellers appearing on this passenger list have any sort of a service rank, simply being listed as Mr for the males and Mrs or Miss for the women. Yet they were all of an age where a researcher would expect them to have been in the armed forces at this stage in the war. A search of the military records on TheGenealogist finds a number of these 'Govt. Officials' in the Royal Air Force Lists. What is more, they appear as officers that had received their commissions into the RAF years before this ship sailed. This points to the fact that this group were actually service personnel on their way to the USA and in some way connected with the war effort.

Looking at the world news from that time, we can not fail to note that a few days before the Bodegraven sailed, on the 11th March 1941, President Franklin Roosevelt had signed into law the Lend-lease agreement. Under this the United States began furnishing Britain, and other countries, with warplanes and ships. We may, therefore, wonder if this and the sailing of RAF personnel to New York were connected. However the four ladies remain a mystery - was this just an example of sexist humour from the time? 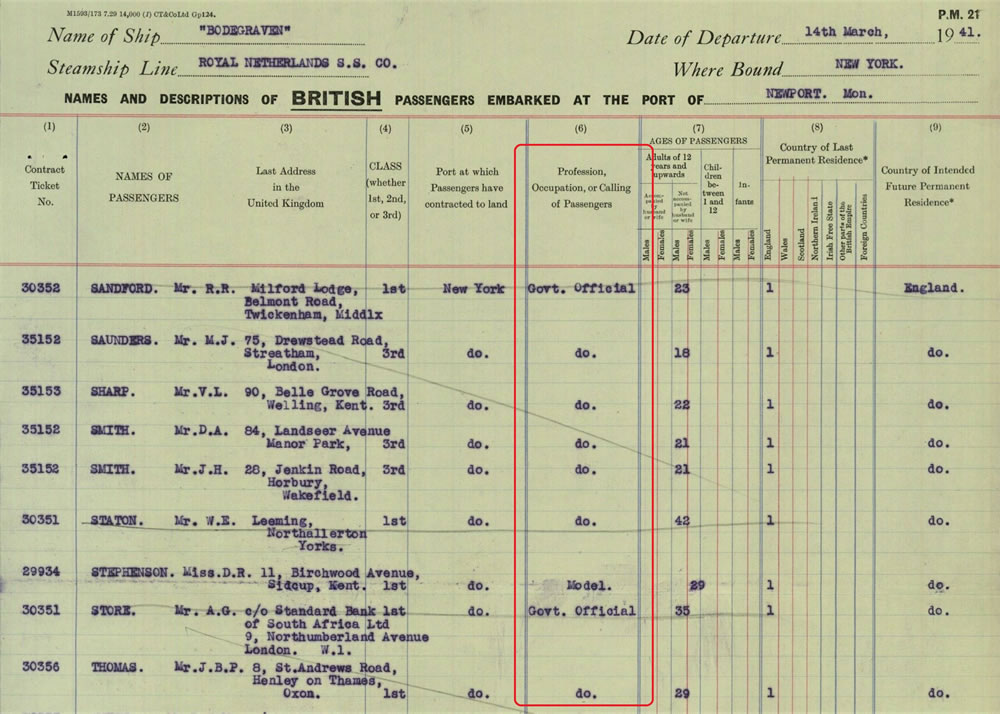 'Government officials' and 'Models' travelling on the M.V. Bodegraven departing on 14th March 1941

Apart from the inevitable troop movements, there is the fascinating period at the end of the war when we can search ships taking the British wives of Canadian servicemen across the ocean to their new home in Canada. If one of your family members met, fell in love and married a Canadian at this time, then these records can reveal the date of their voyage to a new life in North America. 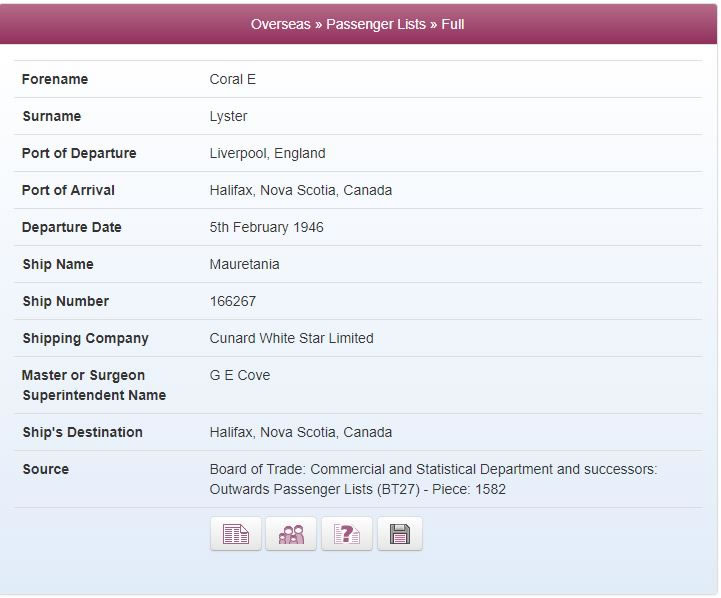 Coral E Lyster travelling to Halifax, Canada on the Mauretania in the transcript of passenger lists on TheGenealogist

In 1948 an official Canadian source, The Department of Mines and Resources, reported that a total of 64,451 dependents had arrived in Canada since 1942. As well as the British wives of Canadian soldiers, airmen and sailors that had been stationed in Britain there were also a number of children born in the UK to the war time couples. One such bride and her child was Coral Eswyn (née Ellinor) Lyster and Terrance, her son. Coral went on to become an author writing about her experience under the pen names of Eswyn Lyster and Eswyn Ellinor-Lyster. 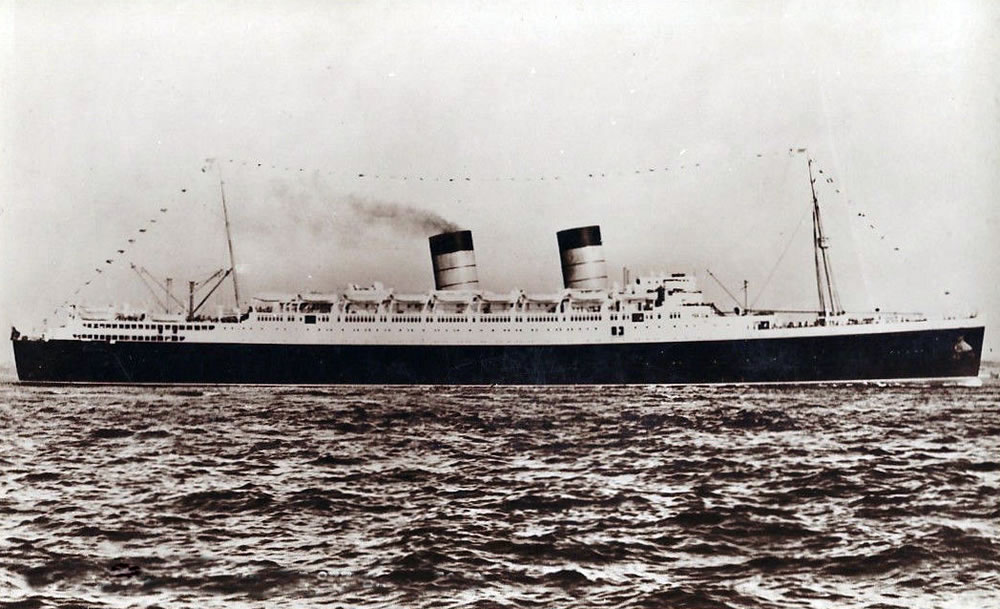 RMS Mauretania from the Image Archive on TheGenealogist

From the outbound passenger lists for the RMS Mauretania, crossing the Atlantic Ocean on the very first dedicated war bride sailing in February 1946, we can find Coral and 1 ½ year old Terrance. The voyage was from Liverpool to Pier 21 in Halifax, Nova Scotia. As her husband was from Alberta, on the western side of this vast country, on arrival she and her son then had to cross the huge expanse of Canada on a train. 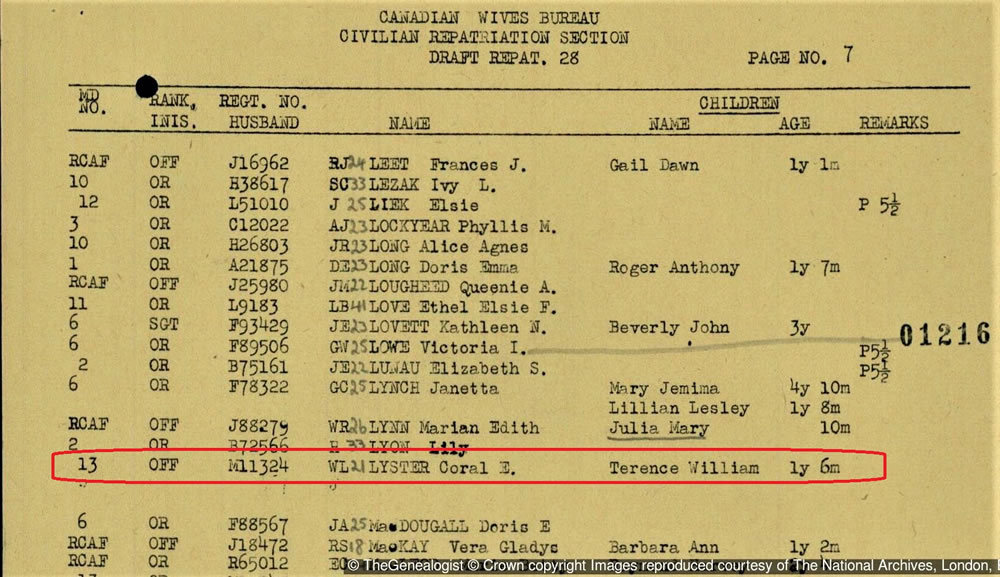 Coral had been born in Lambeth, London to Stanley Ellinor and Coral Winifred Stuart in 1923. During World War II she served in the Women's Royal Naval Service (WRNS) when in 1943 she met Company Sergeant Major Bill Lyster of the Calgary Highlanders, a Canadian regiment stationed in her home town of Aldwick, Sussex. The two were married later in the year and in April 1945 Bill Lyster was sent to Sandhurst to train as an officer and received a commission as a Lieutenant in 1944. He was made up to the rank of Captain and then on the 22nd of April 1945, one day from being confirmed in the rank of Major, he was badly wounded by the enemy. Lyster had been conducting a recce near Oldenburg in Germany when he was shot in the chest and arm - the wound was serious enough for the Canadian army to repatriate him home to hospital in Canada, leaving his wife and child behind in England.

In 1946, with the war over Coral and their son Terry were able to follow Bill courtesy of The Canadian Wives' Bureau. This Canadian Government office had been set up in 1944 to arrange ship and train travel for war brides and dependents to their Canadian husbands.

From child 'seaevacuees', service personnel masquerading as 'Government Officials' and 'Models', to the reuniting of wives and children with their Canadian husbands, this war decade is a fascinating one to explore in the passenger lists on TheGenealogist. 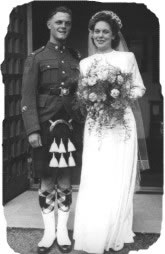