In South East England, bordering London, is the attractive county of Buckinghamshire, named after Bucca, an Anglo-Saxon landowner. The newly released colour tithe maps of Buckinghamshire, that now compliment the tithe records on TheGenealogist, allow us explore the landscape of this area in Victorian times and look for the plots of land owned or occupied by ancestors from all levels of society at the time of the survey. The original records were compiled between 1836 and the 1850s with some later altered apportionments being made when property was sold, or the way that the land was divided up required the change to be recorded. 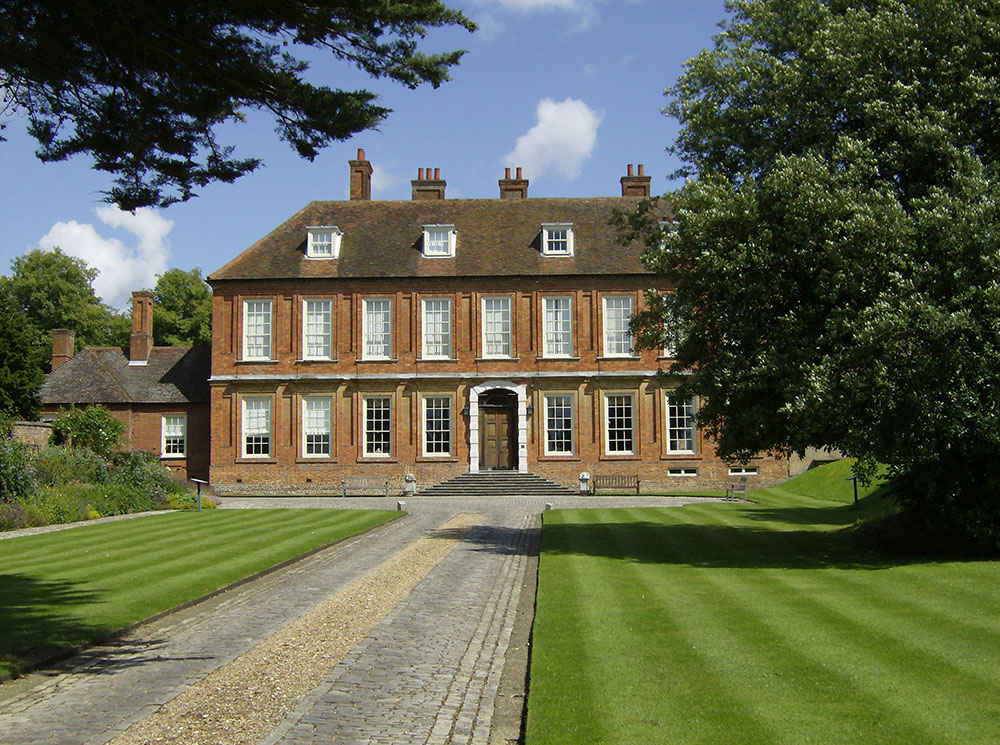 Buckinghamshire is not short of country houses and it was the 19th century home of the D’Israeli family. Writer and scholar, Isaac D’Israeli leased the impressive red brick manor house known as Bradenham Manor as his home in the 1800s. When Isaac died of influenza in 1848 at the manor house he was buried in the local churchyard. While he had been brought up as a Jew and had not converted to Christianity, he did have his children baptised as Christians. This included his son Benjamin, who would go on to become the British Prime Minister in 1868, and with his siblings would have spent some of his early life at Bradenham Manor. The manor house and estate is one we can discover in the tithe records for Buckinghamshire and therefore also on the newly released colour maps. 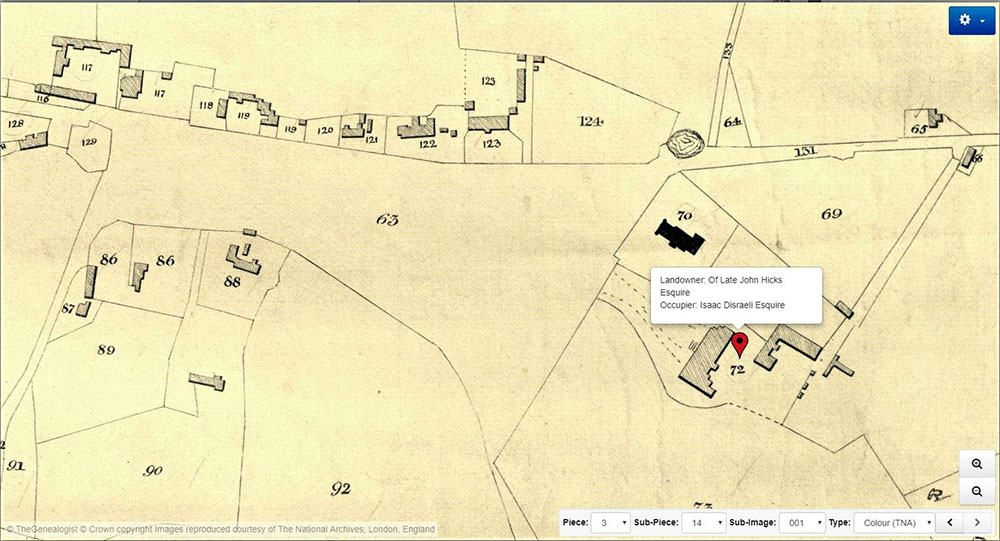 Consulting the tithe apportionment book, dated the 26th May 1846, we can see Isaac was the occupier while the Trustees of the late John Hicks Esq are recorded as the landowner. 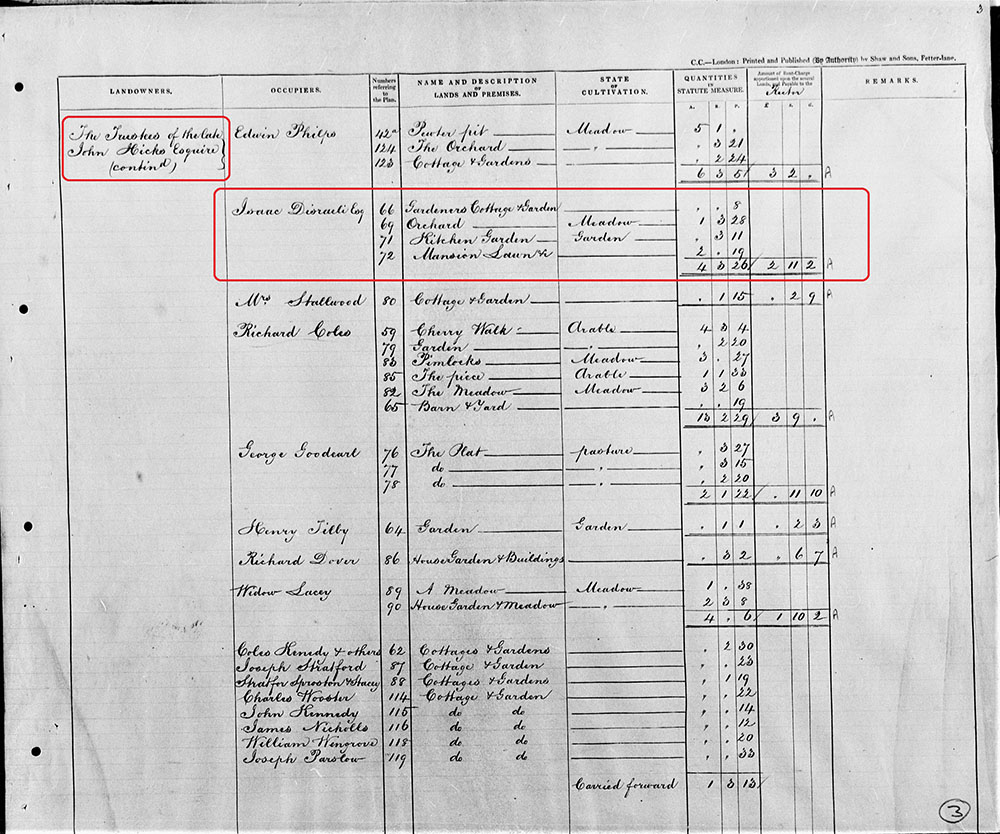 Tithe apportionment book for Bradenham in Buckinghamshire on TheGenealogist

This manor had once been, in the 13th century, a property that belonged to the Earl of Warwick. In 1566 it had seen a visit from Queen Elizabeth I when she was entertained here by the 3rd Baron Windsor. The present manor house owes its construction to the 17th century period and features red brick walls, tall windows and steep roofs topped off by slender chimneys. Bradenham Manor is currently owned by the National Trust who lease it to Grant Thornton UK LLP as the firm's National Training Centre. While the house is not open to the public, its gardens are and can therefore be visited.

Four miles away from Benjamin Disraeli’s childhood home at Bradenham can be found another National Trust property: Hughenden Manor. This red brick mansion was built in Victorian times and became the country house of the Prime Minister. As the leader of the Conservative party it was essential at the time that his family became country estate landowners. The manor itself has a long history and had been in existence from before 1086. Formerly part of land belonging to Queen Edith, the Queen consort of Edward the Confessor it was then held by William son of Oger, the Bishop of Bayeux. Hughenden Manor would pass through a number of hands over the years until it was purchased from the executors of a distinguished antiquary and scholar named John Norris. The buyer was the MP's father Isaac D'Israeli who, we have seen, rented nearby Bradenham Manor. He bought Hughenden about a year before his death in 1848 and the estate then passed to his son who, in 1876, was created Viscount Hughenden of Hughenden and Earl of Beaconsfield. By the time Benjamin Disraeli inherited the manor house in 1848, it had become a stuccoed Georgian building extended out from the original medieval property. Disraeli, however, had it completely remodelled between 1860 and 1863 by Edward Buckton Lamb and this is the house that we see today. It is now in the ownership of The National Trust and open to the public. 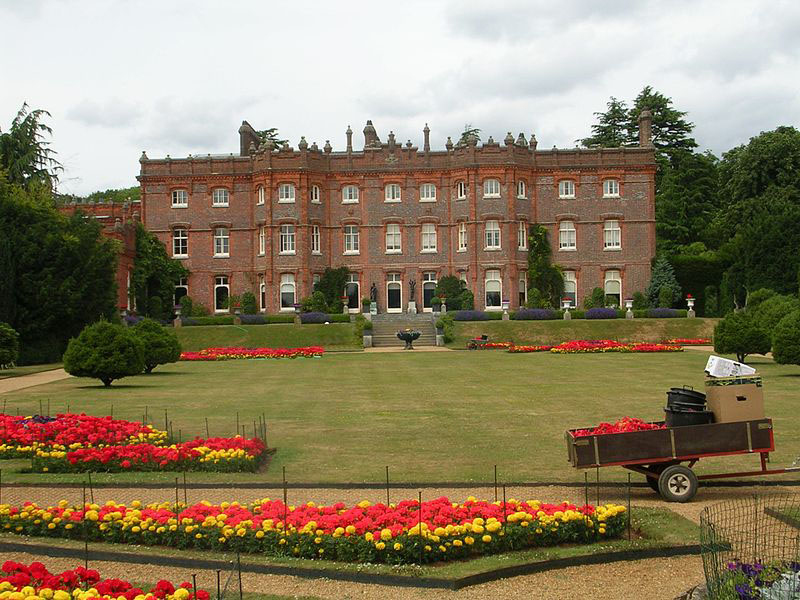 Disraeli lived at Hughenden until 1881, and he and his wife are buried close to the house in the family tomb adjoining Hughenden Church, St Michael and All Angels. Using the National Tithe Collection on TheGenealogist, we can find the manor, at the time of the survey, in the ownership of John Norris. This was before his death and its sale to Isaac D’Israeli by Norris’s executors. While not as clean a map as the first one that we looked at, we can make out the course of a stream that ran nearby and coloured blue on the plan. 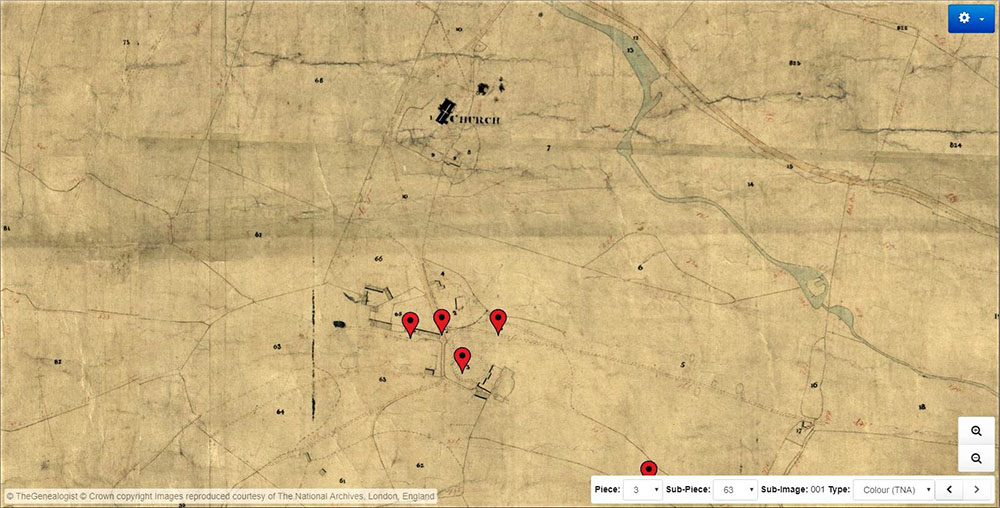 Also in Buckinghamshire is the current country house put at the disposal of modern day Prime Ministers of the United Kingdom. Chequers Court had been a 16th century manor house that was given to the nation in 1921. Located near the village of Ellesborough, at the foot of the Chiltern Hills, it is about 40 miles north west of central London. The years after the First World War brought a different type of politician to the post of the country’s Prime Minister. Unlike their predecessors, they didn’t belong to to the landed classes and so lacked the country palaces with which to entertain foreign dignitaries, or to retreat to and get away from the affairs of state. After some discussion with the Prime Minister of the time, David Lloyd George, Chequers was given to the nation by its owners, Lord and Lady Lee of Fareham. From then until now it has been used as a country refuge for the serving Prime Minister under the Chequers Estate Act 1917.

The tithe map, on which Chequers Court appears, records plots around the house but the land on which the house stands were not subject to tithes. While the vast majority of the country was still titheable at the time of the survey, some had been commuted as part of the enclosure process. Chequers' owner in 1848 was the baronet, Sir Robert Franklin Russell and he can be discovered paying tithes on some of the land that he owned around the estate. 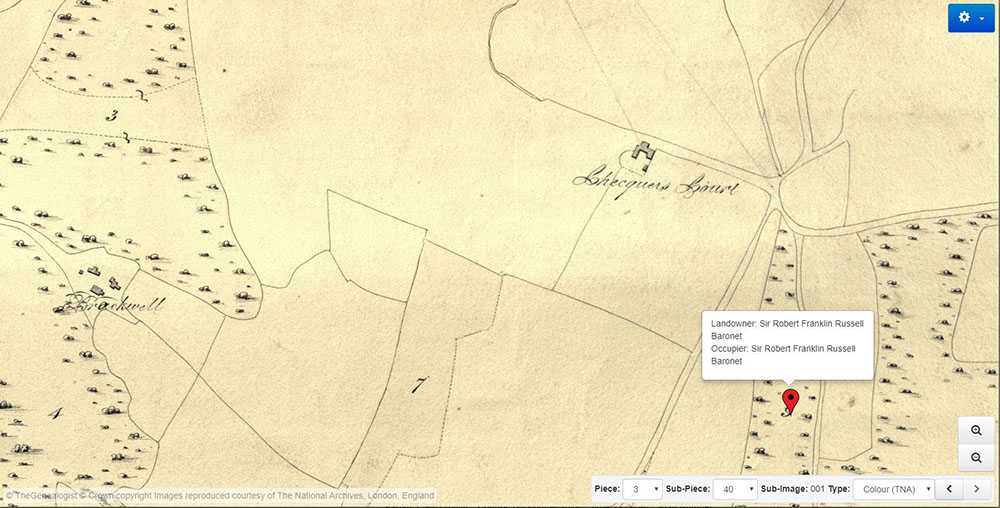 The owner of Chequers, Sir Robert Franklin Russell Baronet still held some land that was subject to tithes on the 6th May 1848 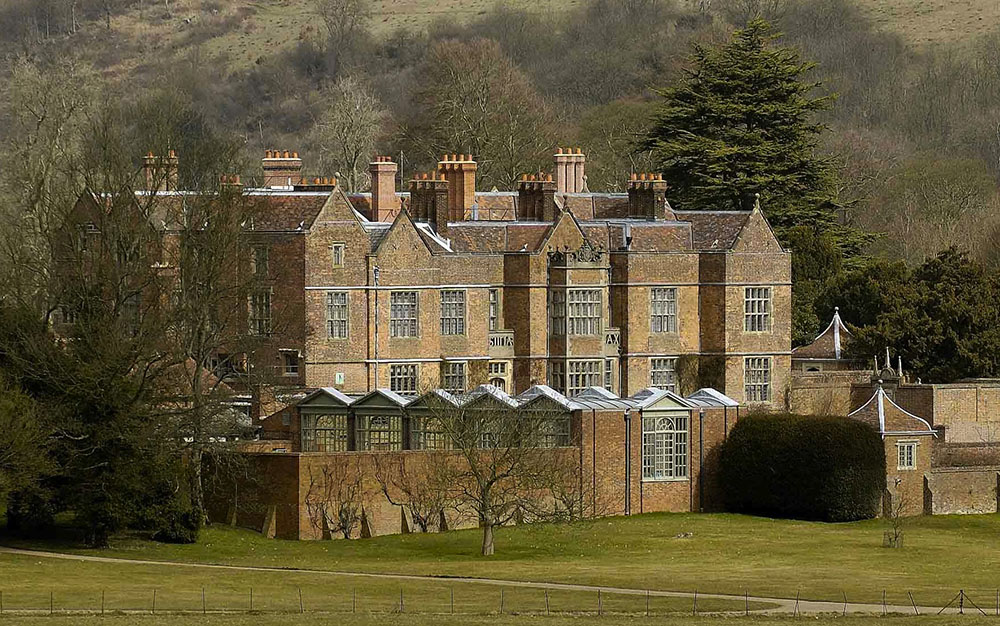 Buckinghamshire should not be thought of as solely a county inhabited by great houses. By examining the tithe records of the town of Buckingham we can find the names of less wealthy individuals such as George Nelson, landowner and occupier of plot 87 which consisted of Cottages and Gardens. Nelson was also recorded in the survey owning plot 88 that was fascinatingly described as ‘Hovels and Gardens’! Occupying plot number 95 in the records was John Roberts. His holding was simply a ‘Cowhouse, Ground and Rickyard’.

Meanwhile at plot 33, in the town, was the accommodation meant for those unfortunates who were at the very bottom of society - the institution intended to strike fear into the poor: The Buckingham Poor Law Union Workhouse. 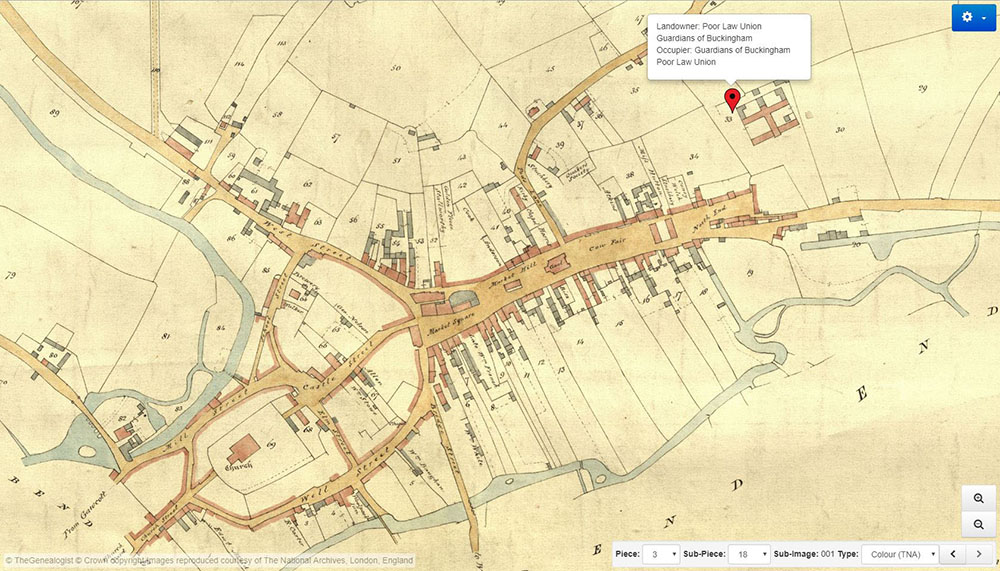 From the homes of Prime Ministers to the hovels and gardens of lesser folk, the tithe records of Buckinghamshire can reveal the plots of land which they owned or occupied. Now that the records have been augmented with colour maps, complimenting the previously published greyscale plans, it is even easier to see where an ancestor may have lived in this ‘home county’ in England’s South East.

To learn more about searching for tithes on TheGenealogist see: www.thegenealogist.co.uk/tithe