From the well known poet Lord Byron to one of his own ancestors, Nick Thorne finds people who changed their names...

When people wanted to change their name officially, they often made announcements in the press to that effect. An alternative way was to make a declaration before a Justice of the Peace or a Commissioner for Oaths. Yet another way was to draw up a legal contract commonly known as a deed poll. Some people would seek to have a Private Act of Parliament passed, while one other way to change a name was to go down the route of obtaining a Royal Licence. Theses last two methods resulted in the names being published in the London and Dublin Gazettes and were common in the 18th and 19th centuries. In later years obtaining a Royal Licence would be the likely route where an inheritance depended on someone taking the deceased's name, a marriage settlement required a husband to adopt his wife's name or a change of name also required an alteration to a coat of arms.

In the First World War enemy aliens were particularly forbidden to change their names and then this was extended to all foreigners in Britain from 1919 to 1971. As long as British citizens were not doing so for a fraudulent or illegal reason it has always been quite legal for them to informally change their name if they wanted. That being the case many people needed to go down a more formal route, especially if it was to comply with the terms of a will.

If your research shows that an ancestor changed their surname or forename you may wonder what records you can use to find them. It can be difficult to find lists for people that carried out this process, however TheGenealogist has just released The Change of Name Database which covers information from a number of sources including Private Acts of Parliament; Royal Licences published in the London and Dublin Gazettes; notices of changes of name published in The Times after 1861 with a few notices from other newspapers; registers of the Lord Lyon [King of Arms] where Scottish changes of name were commonly recorded; records in the office of the Ulster King at Arms and also some private information.

TheGenealogist's interface allows us to search for ancestors using either the surname or forename discarded, or the surname or forename adopted. An example of a person changing their surname in order to inherit from a relative was that of the infamous poet, Lord Byron. In these new Change of Name records on TheGenealogist we can see the entry for Rt. Hon. Baron G G Byron. In 1822, upon the death of his mother-in-law Judith Noel, the Honorable Lady Milbanke, her will required that he change his and his wife's surname to "Noel" so as to inherit half of her estate. George Gordon Byron, better known to us as Lord Byron, obtained a Royal Warrant to do this which then allowed him to "take and use the surname of Noel only" and to "subscribe the said surname of Noel before all titles of honour". From that point, however, he signed himself "Noel Byron" - perhaps a bit reluctant to lose all connection to his previous name? It is interesting that he is still known to us today as Lord Byron! 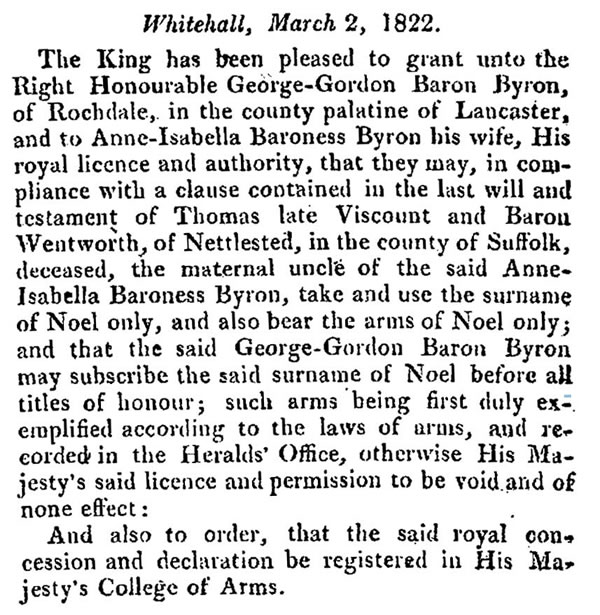 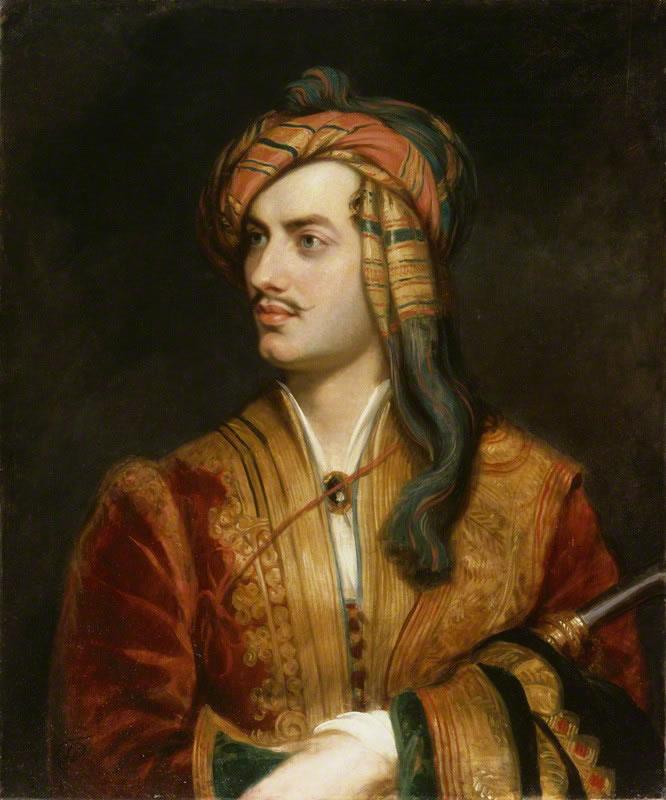 There are some less aristocratic entries in these records, for example Mr G A Oliver Conquest, a Theatrical proprietor and playwright who had been born with the surname Oliver. Though his father had adopted the name Conquest and he was known as such while being the manager of the Garrick and Grecian theatres in London.

Having discovered these examples I was then thrilled to find a collateral ancestor of my very own while searching in this new record set. My maternal line includes a number of well connected Scots antecedents and one of them added no less than two other surnames to his own to adopt a triple-barrelled surname.

Tracing up my maternal family tree finds my great grandfather, Edward Hay, born in the year 1845 in northern France to Scots parents. His mother, Jeanette, was the daughter of William Whitelaw Wemyss and Eleonora Wemyss neé Dalrymple-Horn-Elphinstone. It is this lady's elder brother that I was delighted to discover featured in the Change of Names records. Sir Robert Dalrymple-Horn-Elphinstone is recorded in 1828, the year that he was created a Baronet. 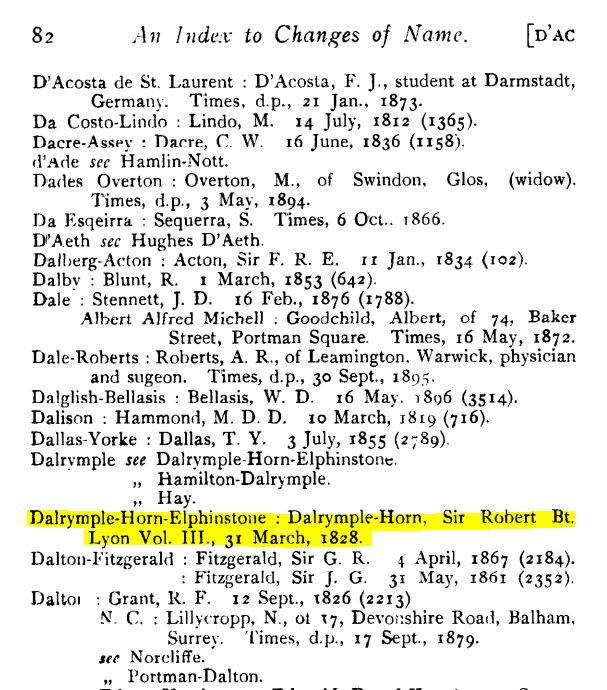 The family's extra long name, my research found, had actually been first adopted by Sir Robert and Eleonora's father, who had also been named Robert. A General in the army he had been born as simply Robert Dalrymple, the son of Hew Dalrymple a judge who sat as a Lord of Sessions in Edinburgh. The General had then added the name Horn from his mother, Anne Horn of Horn and Westhall, on inheriting from her line of the family. His wife, Mary, would then become the heiress of her own father's estate. Mary's father had been Sir James Elphinstone, the 3rd Baronet of Logie, and he had died without male issue. The baronetcy passed at this time to Sir John, his unmarried uncle. But Sir John's own death, just four years later, meant the baronetcy became dormant. General Robert Dalrymple-Horn and Mary then carried on the Elphinstone name by attaching it to theirs as the family then became the lairds of Logie Elphinstone, Mary's paternal home and estate.

This, then, is how my 4 x great grandparents adopted their unwieldy long surname and which their eldest son was officially recognised with in these records when being created a Baronet in 1828 as he had been born Dalrymple-Horn. From the entry we can see that the source for the record was from the registers of the Court of the Lord Lyon in Scotland and probably was at the time of being awarded his coat of arms. Regrettably none of the titles, lands or surnames from any of my Scots ancestors have been passed down to my branch of the family. Nonetheless it has been fun to investigate my well heeled ancestors with their weighty twenty-six character surname! Can you imagine having to sign anything official with that many letters in your name?