From Habitual Drunkards to Spies

There is a sort of fascination to be had looking at records of misdemeanors. Perhaps it’s finding a delinquent ancestor who was convicted of an offence and transported to Australia. Or maybe it’s just finding a habitual criminal whose crime was to turn to drink to cope with the conditions of their hard lives to the extent that their mug-shots were distributed around the licenced premises and registered clubs.

The records from The National Archives in series MEPO 06, that are now fully searchable on TheGenealogist within its Court and Criminal Records, has a motley collection of criminals who had been recorded by the Metropolitan Police. As well as the mug-shot books for preventing drunkards being served in pubs and clubs, there are other records that the family historian may find useful. Complied on the release of the offender from English and Welsh prisons between 1881 and 1925, these were the original registers that were created as a means of supervising the habitual criminal, communicating details of the individuals around other police forces, and also for apprehending those offenders that were wanted by the police.

In amongst the habitual drunks we can find the details and photograph of Michael Kenny aged 35 in 1903. We can read that he also went under the alias of Grady and when he was first convicted and photographed for the habitual drunks book he was a labourer at the Chemical Works in Bow Common Lane. This certainly sounds a dangerous place to be employed, even more so if the man was an alcoholic. In 1903 he is recorded with an address, 53 High Street, Bow - though this was not to last. His punishment this time was a month of hard labour and he was ordered to find surety of £10 for 6 months - something that he failed to do and was in default. 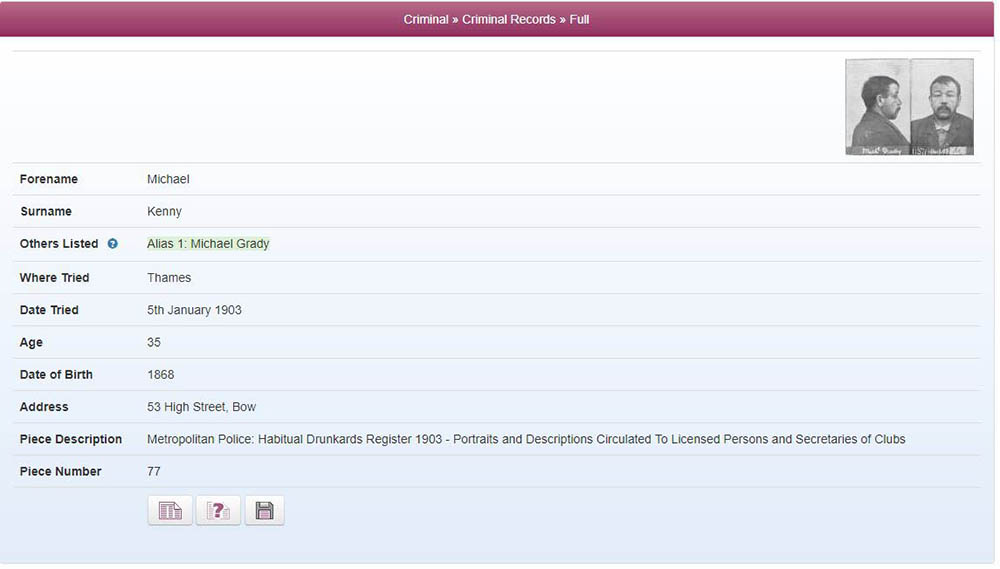 Poor Michael doesn’t seem to have learned how to control his drinking as two years later, in 1905, he appears again. In this edition he is still frequenting Bow Common Lane and Devon’s Road in Bow, but he no longer has a job or a fixed abode. This time he has been committed to a certified inebriate reformatory for three years. 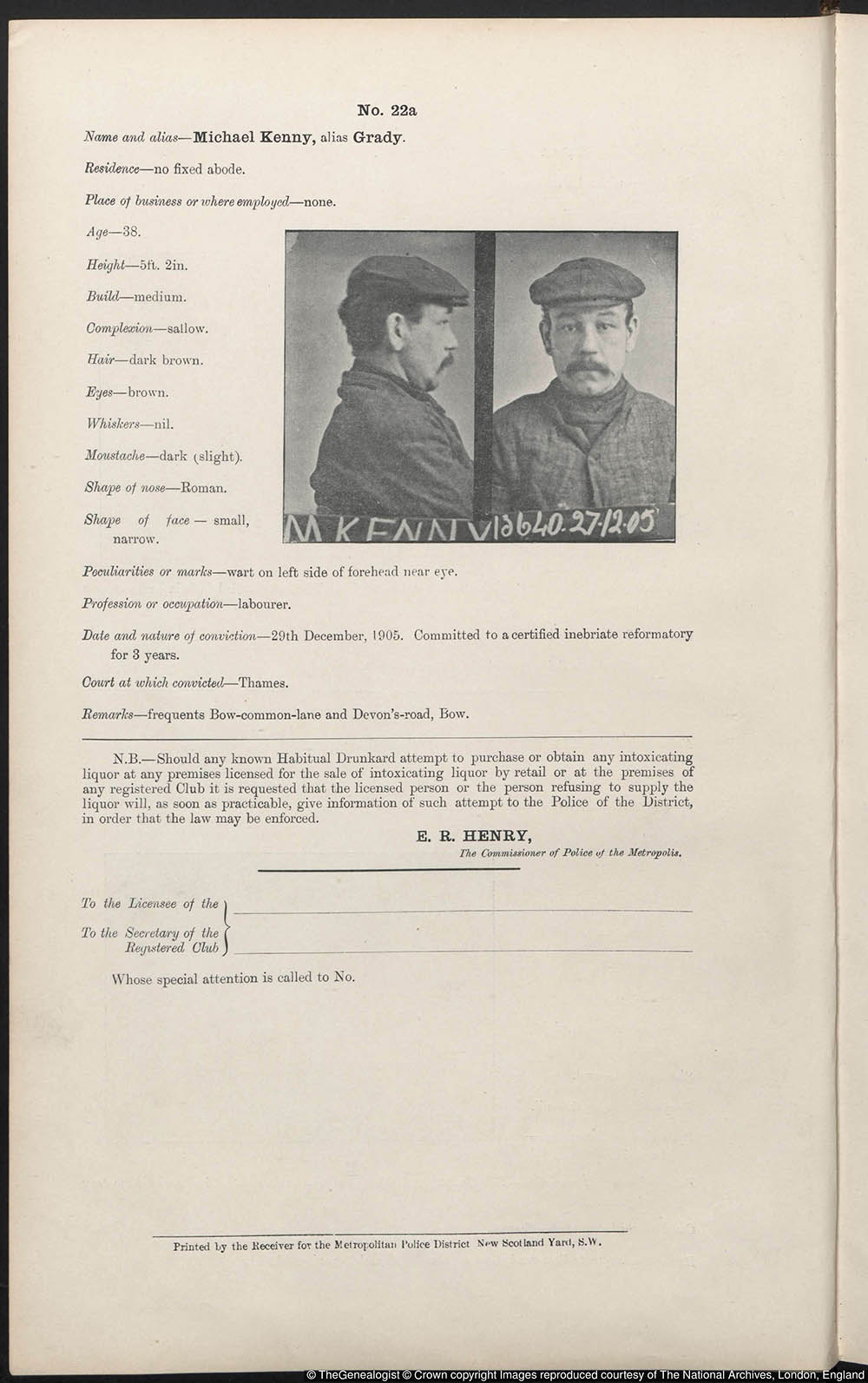 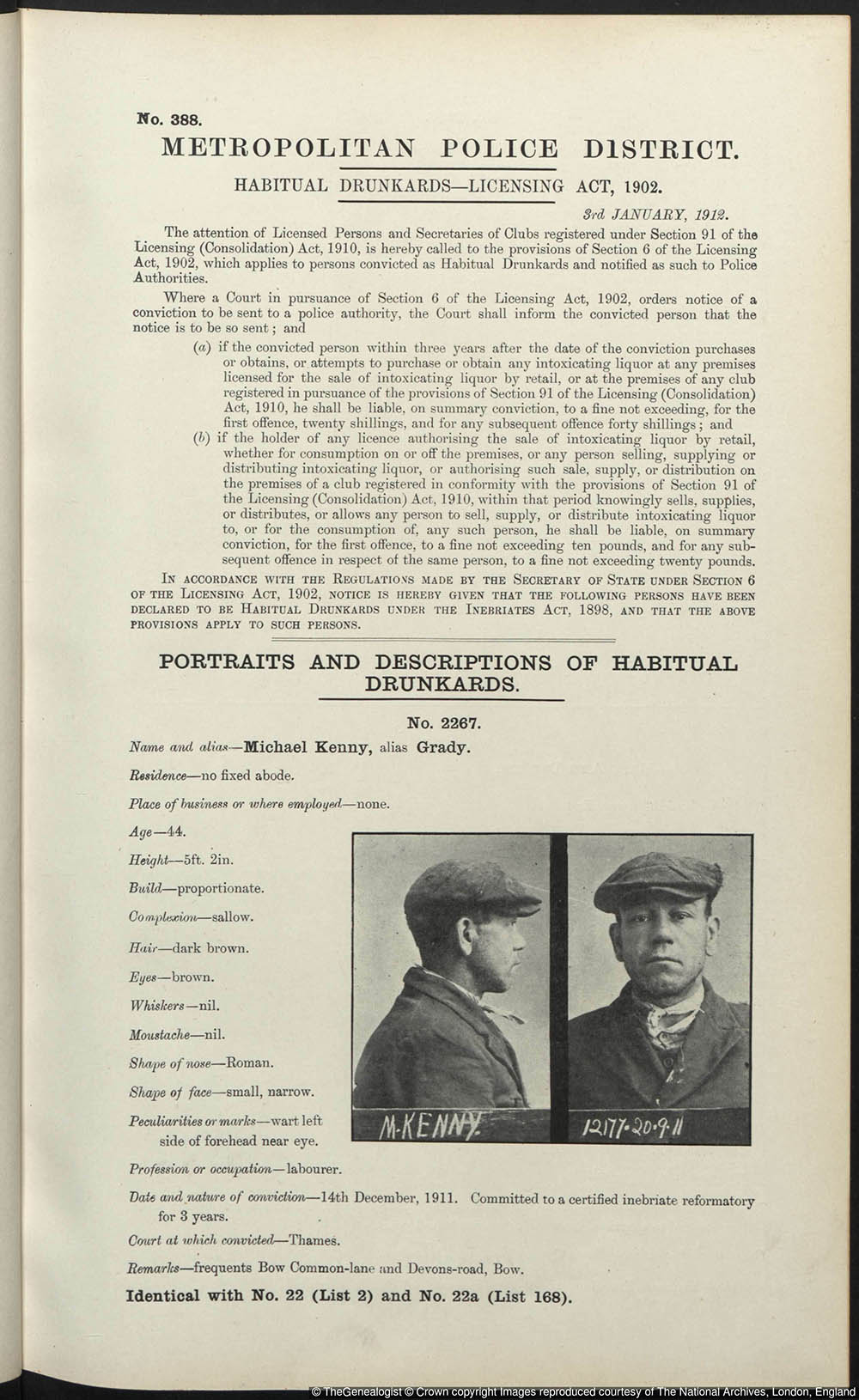 A further search finds him convicted yet again in December 1911 and committed for a further 3 years in the certified inebriate reformatory. His 1911 picture shows that he has shaved off his moustache but he is still attached to wearing a flat cap.

If you find an ancestor within these registers, the detail can be fascinating in the descriptions that they provide for the individual. You will be able to discover features such as the shape of their face, height, complexion and other distinguishing marks (for example tattoos). It is not just men who are recorded in these records as there are a large number of females. Most have no employment while some are flower sellers, factory hands, charwomen and the odd prostitute. 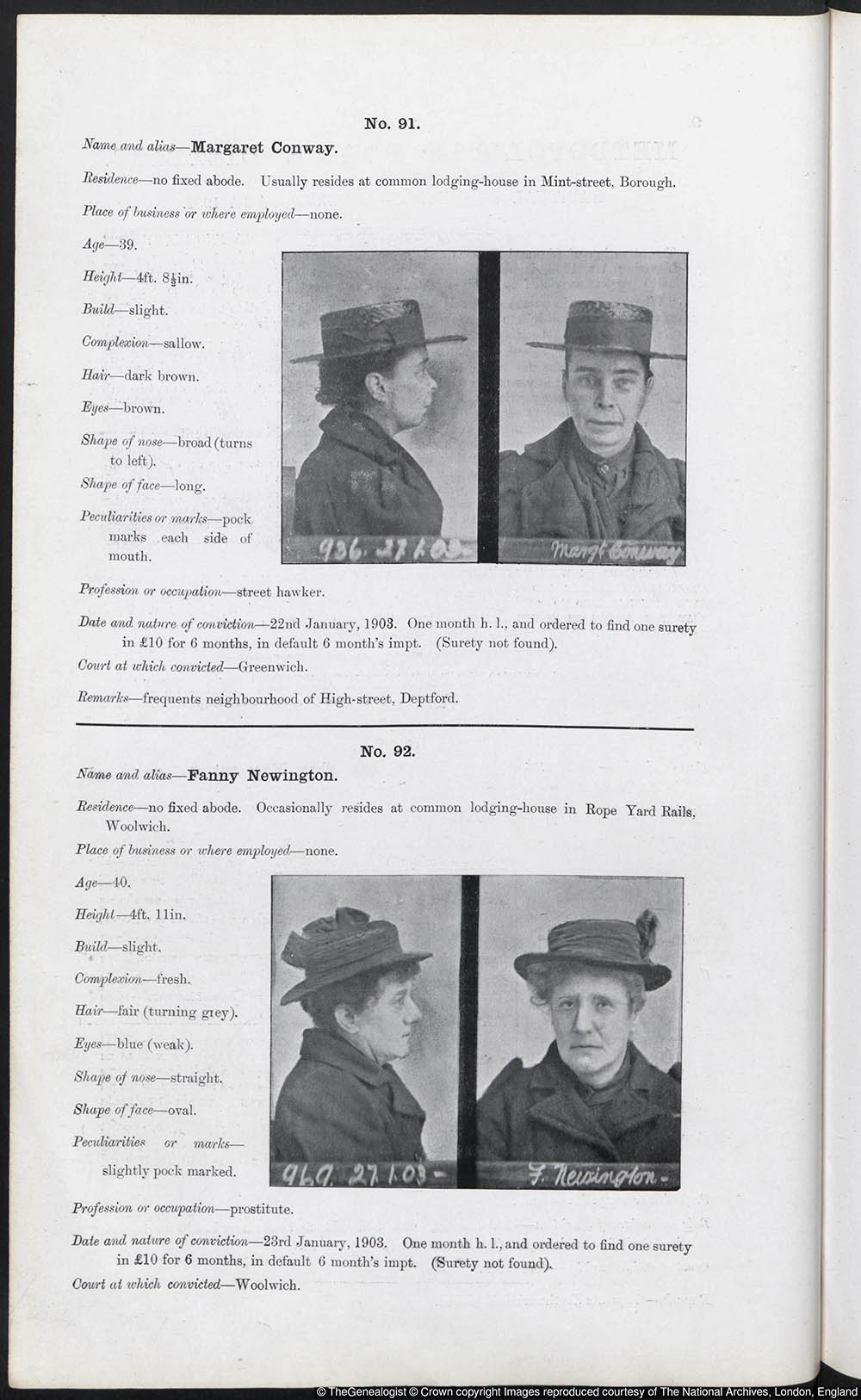 The case of the Spanish Spy and the beautiful dancer

Searching deeper in the MEPO 6 records on TheGenealogist discovers that it also includes the fascinating lists of convicts released from prison whom the Met Police still wanted to keep a watch over. In December 1923 we can see the details of a Spaniard, Adolfo Guerrero who was to be deported at the end of his sentence in a British prison for spying! Guerrero had been convicted in 1916 of “Doing An Act Preparatory To Collecting Information Which Might Be Useful To the Enemy Being In Communication With A Spy”. Originally sentenced to death his punishment was commuted to 10 years in a convict prison - and now he was out. His intended place of abode was to be Madrid and his occupation was listed as a Journalist.

Research has shown that Adolfo Guerrero was part of a good Spanish family but he had been accused of being a member of the German secret service. In the First World War he had been sent to England to obtain information on the movements of merchant ships. Newspaper reports reveal that he was infatuated with a beautiful Spanish dancer known as La Sultana and, wanting her to join him in England, he persuaded a Spanish firm in London to offer her a clerical position. This was to enable her to obtain a passport from France. Unluckily for the dancer, her arrival in Britain coincided with the Police investigation into Guerrero, reaching the point where he could be arrested. La Sultana made a fatal mistake of saying that she was going to England to join Guerrero, her husband, rather than to take up the office job. When the officials were suspicious of this change in story she was subjected to relentless questioning by Scotland Yard, under which she broke down. The Police had already been watching many Spanish Journalists as potential spies when Guerrero had arrived and had been intercepting their mail. The Spaniard was found to be unable to speak English and to have also forged his identity card himself, both of which were suspicious. Further investigation discovered that he had no connection to the El Libral newspaper that he claimed to work for. Though Guerrero was to serve seven years of penal servitude at Dartmoor prison, the dancer was held to be guiltless of spying - however she was deported. 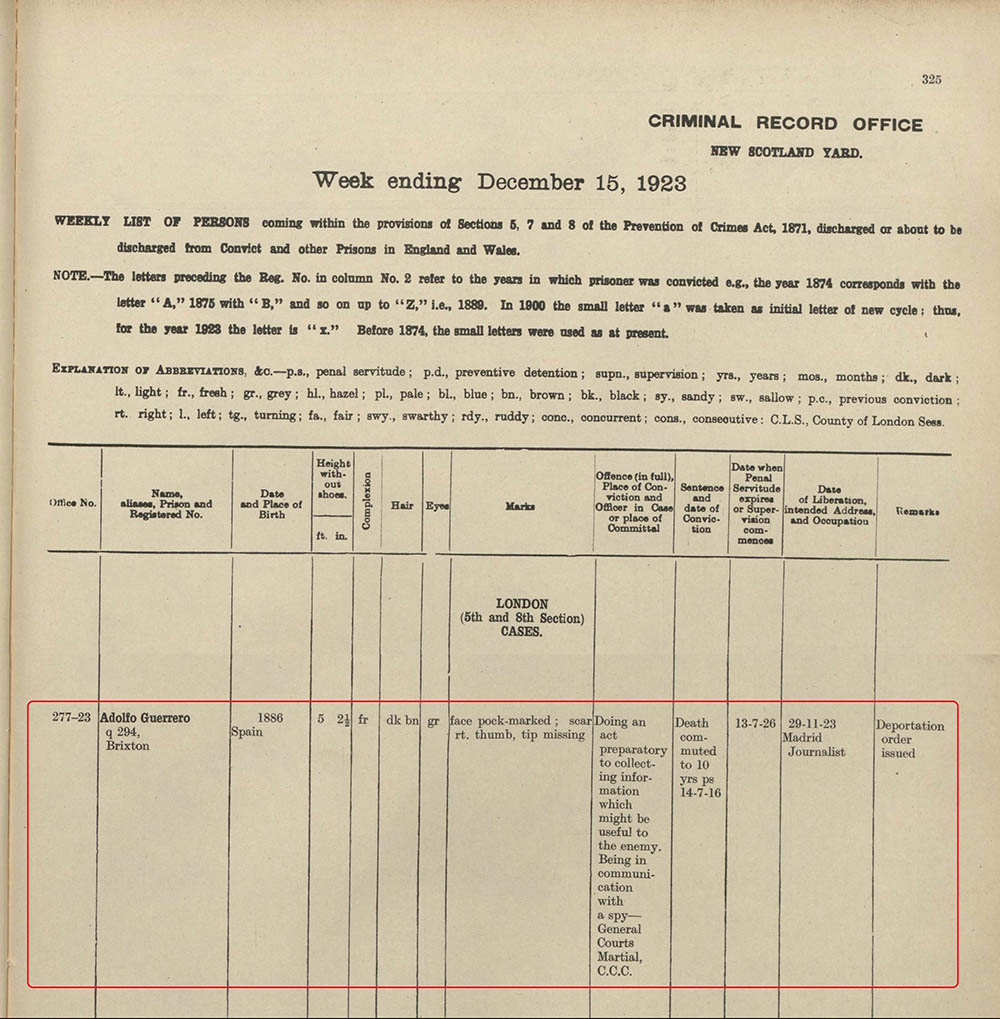 The spy Adolfo Guerrero in the Metropolitan Police: Habitual Criminals Register 1923 on TheGenealogist

From drunks to spies, all aspects of nefarious life is recorded in TheGenealogist’s Court and Criminal records.