In the North West of London lies the Borough of Brent covering the civil parishes of Willesden, Wembley and Kingsbury. Today it has become a well developed area as London has expanded and it is the latest addition to TheGenealogist's Lloyd George Domesday Survey. These records and maps can be used by family historians to find ancestors' homes, especially where the topography has changed over the years since the land tax valuation was undertaken between 1910 and 1915. Brent developed rapidly in the years between the two World Wars. This area would have been much more rural at the time of the survey than it is today when our ancestors would have been used to seeing extensive farmland and woods.

Dollis Hill was once the home of the Finch family who had purchased various pieces of land to create two farms, one north of Dollis Hill Lane, where they had their farmhouse, and a smaller one south of the road. With their proximity to the capital, the farms supplied hay to feed London's many horses and the dairy cows produced fresh milk for the metropolis. By 1825 the Finch family were comfortable enough to build themselves a new larger house on the opposite side of the road from their original farmhouse. The new Dollis Hill House became the family's residence until 1850 when one of their number, Henry Finch lost a well paid position at the Royal Mint. In 1861 they were forced to move back across the road into the farmhouse and lease out Dollis Hill House to the Liberal politician Sir Dudley Coutts Marjoribanks, who later became the 1st Baron Tweedmouth.

Twenty years later in 1881, Lord Tweedmouth's daughter and her husband moved in and used it as their summer residence for the next 16 years. They were Lord and Lady Aberdeen and old friends of the country's Prime Minister, William Gladstone. The elderly Gladstone would come to stay for the weekend, or longer periods, as Dollis Hill House was a tranquil place that was not far from London. It was reported that his doctor would advise him to go there whenever he was tired or unwell.

The house saw lots of parties and other events in this period while the Aberdeens held the lease. By 1897, however, Lord Aberdeen was made the Governor-General of Canada and they moved out.

An American writer comes to stay

In the early part of the 20th century this Brent property was then leased to a Scottish newspaper proprietor, Sir Hugh Gilzean-Reid, and a one time Liberal MP continuing the house's connection to the Liberal party. The owners, meanwhile, were open to offers and while Gilzean-Reid was in residence they sold the land and house to the local council. It had been in 1899 that Willesden Urban District Council resolved that it should acquire another tract of public open space. The growth of the area had seen Willesden go from 3,000 souls in 1841 to more than 100,000 by 1905. The council had already got Queen's Park and Roundwood Park in its portfolio and reports reveal that buying another open space met with opposition from local ratepayers. Willesden then got other councils to contribute and with private donations the full cost of the 96 acres, £51,300, was raised and so it passed into public ownership.

Sir Hugh Gilzean-Reid remained living at the house even after the council had bought it and its previous owner, Robert Finch, continued to farm the land north of Dollis Hill. With the death of Gladstone in 1898 Willesden Council then decided to name the park after the former Liberal Prime Minister and it was opened in 1901 by Lord Aberdeen. 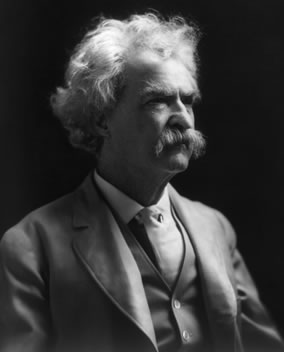 In the years preceding the Valuation Survey, Dollis Hill House grounds were noted for their attractiveness by one of Sir Hugh's literary guests at the house. In the summer of 1900, while Sir Hugh Gilzean-Reid was still the leaseholder, the American author Samuel Langhome Clemens (pictured right) came to stay and was so impressed by the place that he wrote of it:

"I have never seen any place that was so satisfactorily situated, with its noble trees and stretch of country, and everything that went to make life delightful, and all within a biscuit's throw of the metropolis of the world"

Clemens was, of course, better known by his pen name of Mark Twain and he went on to say:

"There is no suggestion of city here; it is country, pure and simple, and as still and reposeful as is the bottom of the sea...Dollis Hill comes nearer to being a paradise than any other home I ever occupied". 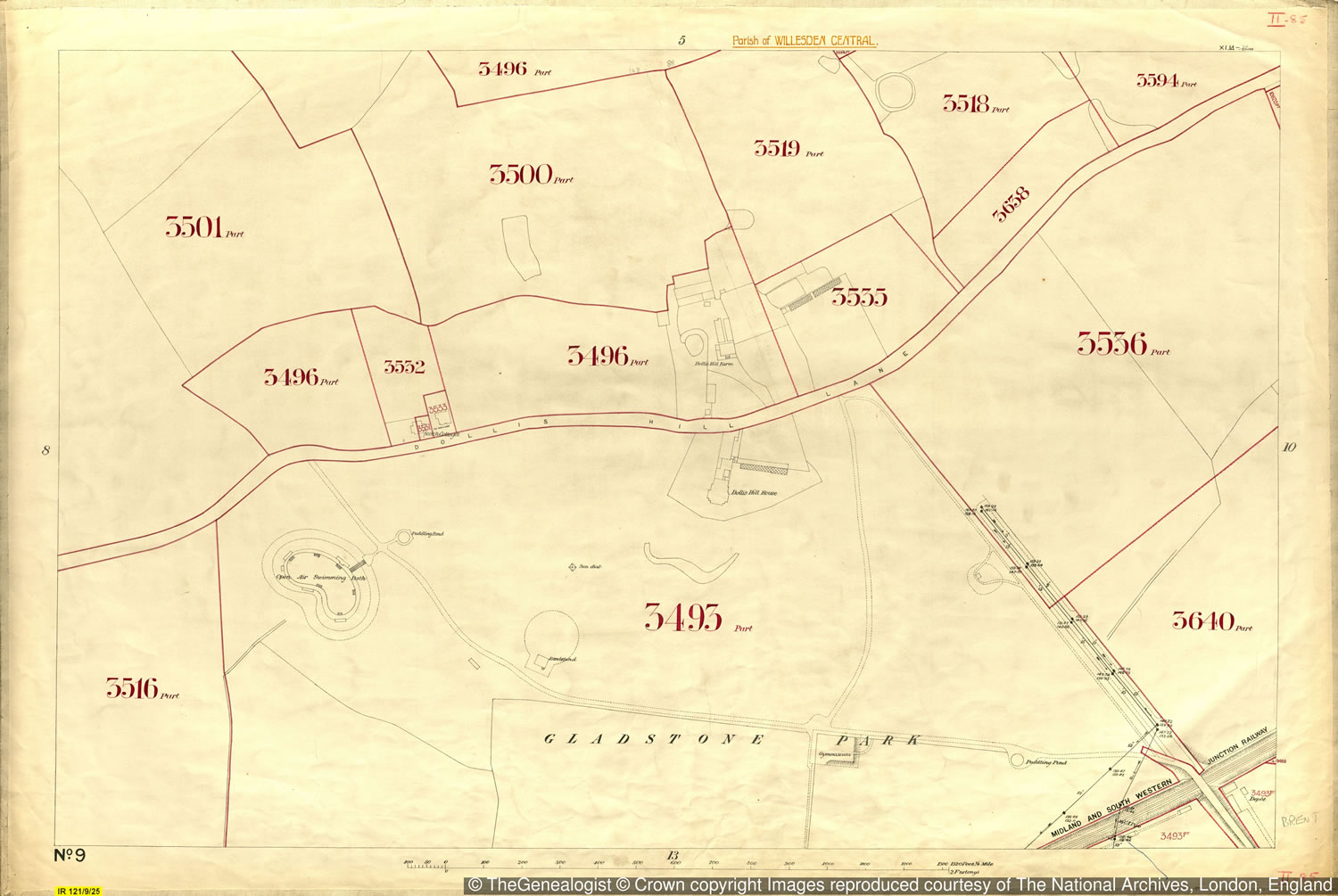 IR121 map of Brent detailing Dollis Hill House, Gladstone Park and Dollis Hill Farm to the north of the lane

By looking at the property in the recently released records on TheGenealogist, we see that the grounds have been recorded as Gladstone Park and had been laid out with a swimming pool, a bandstand and a children's playground by this time. Another old map from the 1930s reveals how the area would change with Gladstone Park now boasting tennis courts, a bowling green, putting green and a children's playground. While the farm house on the north side of the lane is still in existence, all the fields around it have been built upon. A current map today shows that all the way up to the North Circular, that runs just to the south of Brent Reservoir, the area is densely developed. This would seem to vindicate the decision of Willesden council to purchase these grounds as a green lung for its residents to enjoy. 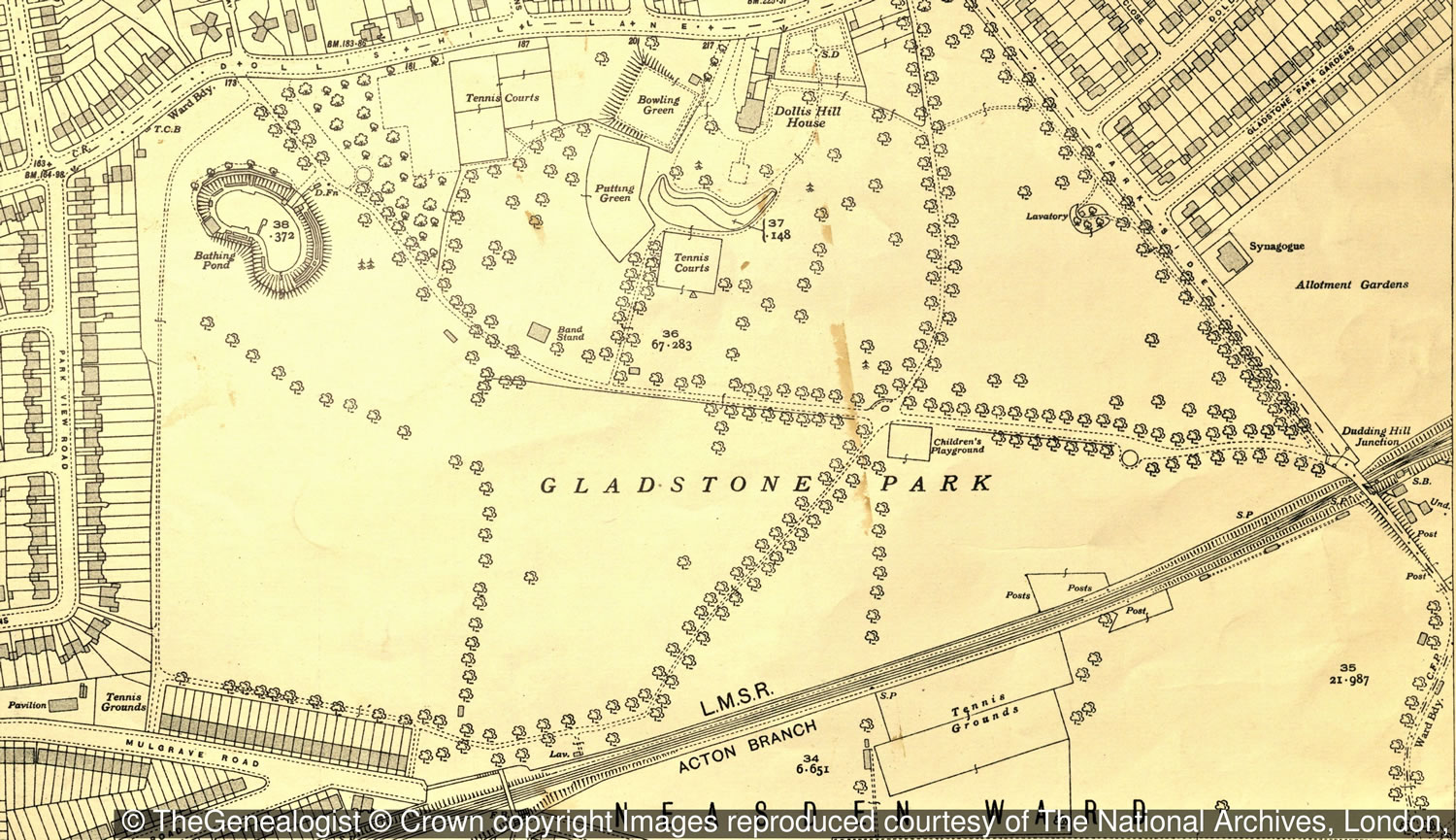 After a period when the ground floors acted as a tearoom for the park, Dollis Hill House became an auxiliary hospital in 1916. Later it took on the role of a restaurant. It survived until 2012 when it was finally demolished having been damaged by arson twice in the 1990s.

Dollis Hill Farm and farmhouse appears in the 1910 Valuation Office Survey as being still owned by Robert Augustus Finch, now living at Upton Lovell House, Wells but let to a Frederick Lavender on a 7 year lease. Mr Lavender appears to be a dairy farmer from the details in the field book that tell us the "farm house and buildings and land used by the tenant for grazing purposes and buildings as cow sheds for his business as dairyman." 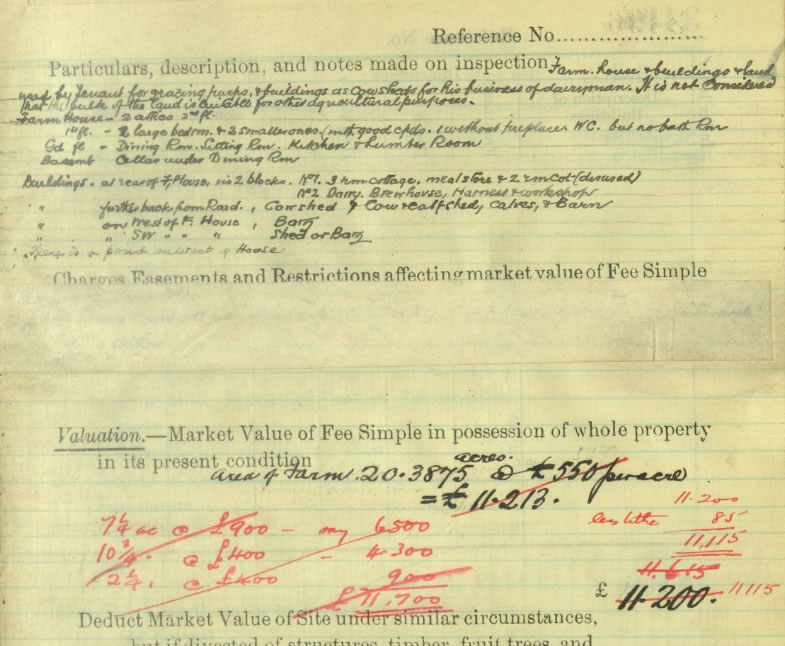 From the time running up to the First World War, these records often allow us to see an area that has been redeveloped since 1915, when our ancestors' homes have been demolished as a result of blitz damage, new roads, and modern buildings remodeling the landscape. In Brent's case we can see in these records the countryside of our forebears at a time just before the fields and woods disappeared under the growing suburbs of London.