Search and discover the residences of ancestors who had the vote...

For those of our ancestors who could vote in a time before universal suffrage became the norm, Poll Books can be a useful resource. We can use them to discover addresses, especially before the census years. Published Poll Books go back as far as the 1700s and continue until 1872 when The Ballot Act 1872 introduced the secret ballot. Also strange, to the twenty first century mind, is that some of our ancestors would have had a vote in more than one place until this was abolished by the Representation of the People Act 1948. Up until then property owners could vote in both the constituency where they owned property as well as the one in which they lived.

In Suffolk, where the celebrated nineteenth century landscape painter John Constable was born and spent his early life, the database is particularly rich in the number of records that it covers. Constable's father, Goldring Constable, was a corn merchant in a village on the River Stour and can be found in the 1790 records. At this time the budding painter would have been just 14. John, as the middle brother, was destined to go into the family business as his elder sibling was disabled. Nine years after this Poll Book had been compiled John, however, persuaded his father to let him pursue a career in art and to also give him a small allowance so that he could do this.

Golding Constable had inherited Flatford Mill and its flour milling business from his uncle, Abram Constable, who had died childless in 1764. John Constable's father also operated Dedham Mill, initially co-owning it with solicitor Peter Firman before eventually buying out his partner. Both of the watermills were immortalized by his son in paint in the years 1817 to 1818. Apart from these water-powered mills Golding additionally owned the windmill situated at East Bergholt. In order to get his product to market the entrepreneur owned several of his own barges that plied up and down the River Stour as well as two seagoing ships, The Telegraph and the Balloon, that could sail from Mistley Wharf to London. On top of this the artist's father owned and farmed 93 acres of land in East Bergholt.

From the Suffolk poll book for the parish of East Bergholt we can see that Golding Constable cast his vote for two of the three candidates, denoted by the initials of R and B in the columns to the right. By taking a look at the front of the scanned poll book we can determine that this would have been Sir John Rous and Sir Thomas Charles Bunbury, both of whom were elected to parliament in the ballot that was held to send two candidates to the House of Commons as representatives for the county of Suffolk. 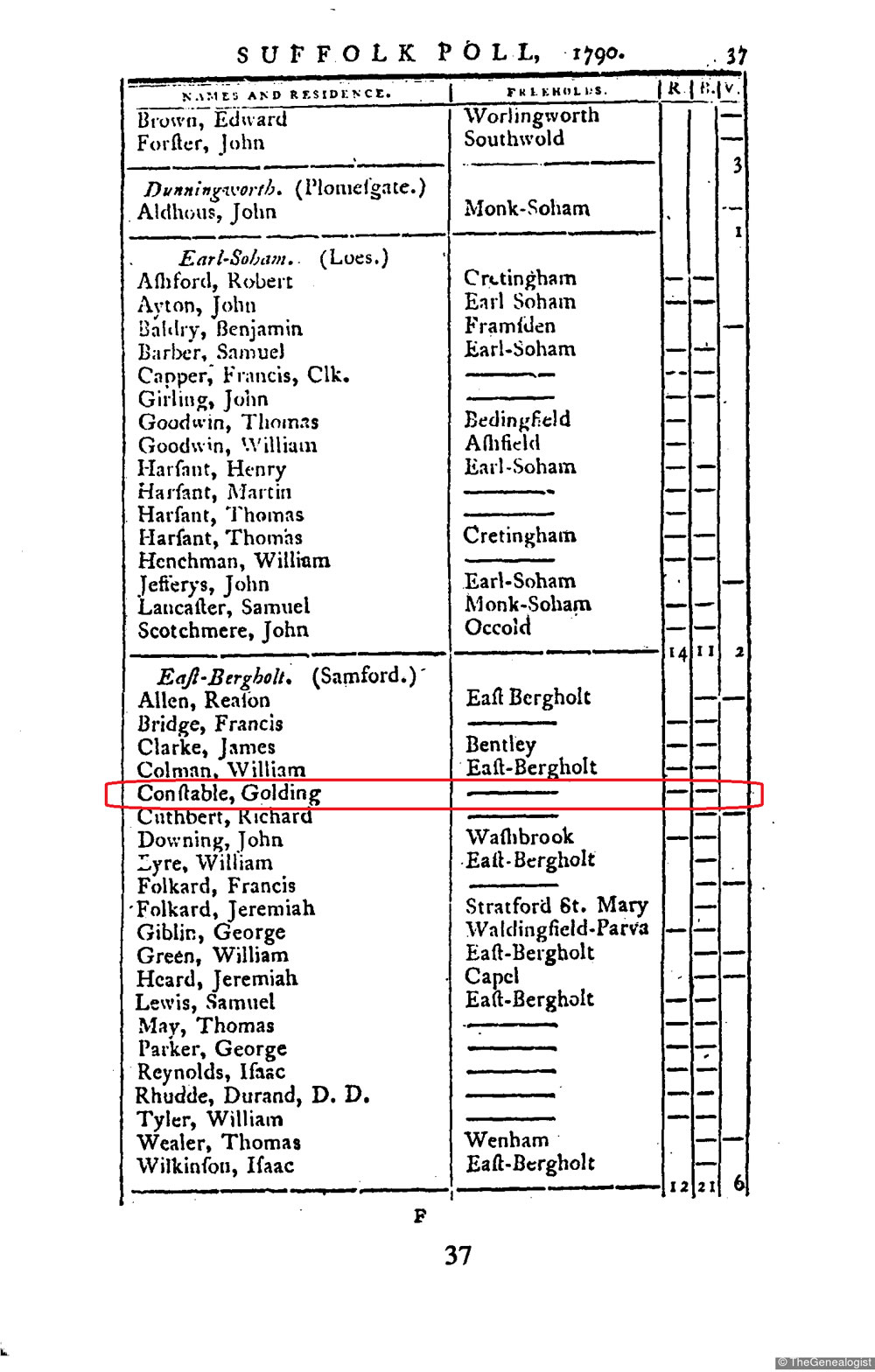 Golding Constable, father of the artist John Constable in the 1790 Poll Book on TheGenealogist

On the same page of this same poll book in which Golding Constable was recorded we can also see listed a Durand Rhudde D.D. This gentleman was the Reverend Doctor Rhudde, Rector of East Bergholt and the grandfather of Maria Bicknell whom John Constable would eventually marry when he was 40 years old. Though John and Maria had fallen in love earlier in life her clerical grandfather strongly objected to the union of a member of his family with that of the Constables. Because of Reverend's disapproval of John the two sweethearts were forbidden to see each other. In the end, however, when the artist inherited some money on his father's death he and Maria were finally able to be married. Their wedding took place in London and was celebrated by the Rev. John Fisher, who was a friend of John Constable and would eventually rise to become the Bishop of Salisbury.

John Constable's businessman father died in the year 1816 when he was 77. Under normal circumstances the eldest son would have been expected to take on the running of the family business after his father passed away. However John's eldest brother, also named Golding, was unable to do this because of his disability. The burden of running the Constable's enterprise was lifted off second in line John's shoulders while their father was still alive when his youngest brother Abram was willing to step in and learn the ropes. If we then move forward to The Poll Book for the Eastern Division of the County of Suffolk taken Dec 17 and 18 in 1832 we see that both brothers Golding and Abram are recorded still living in East Bergholt. After years as a game warden Golding had bought a cottage known as Pie's Nest. 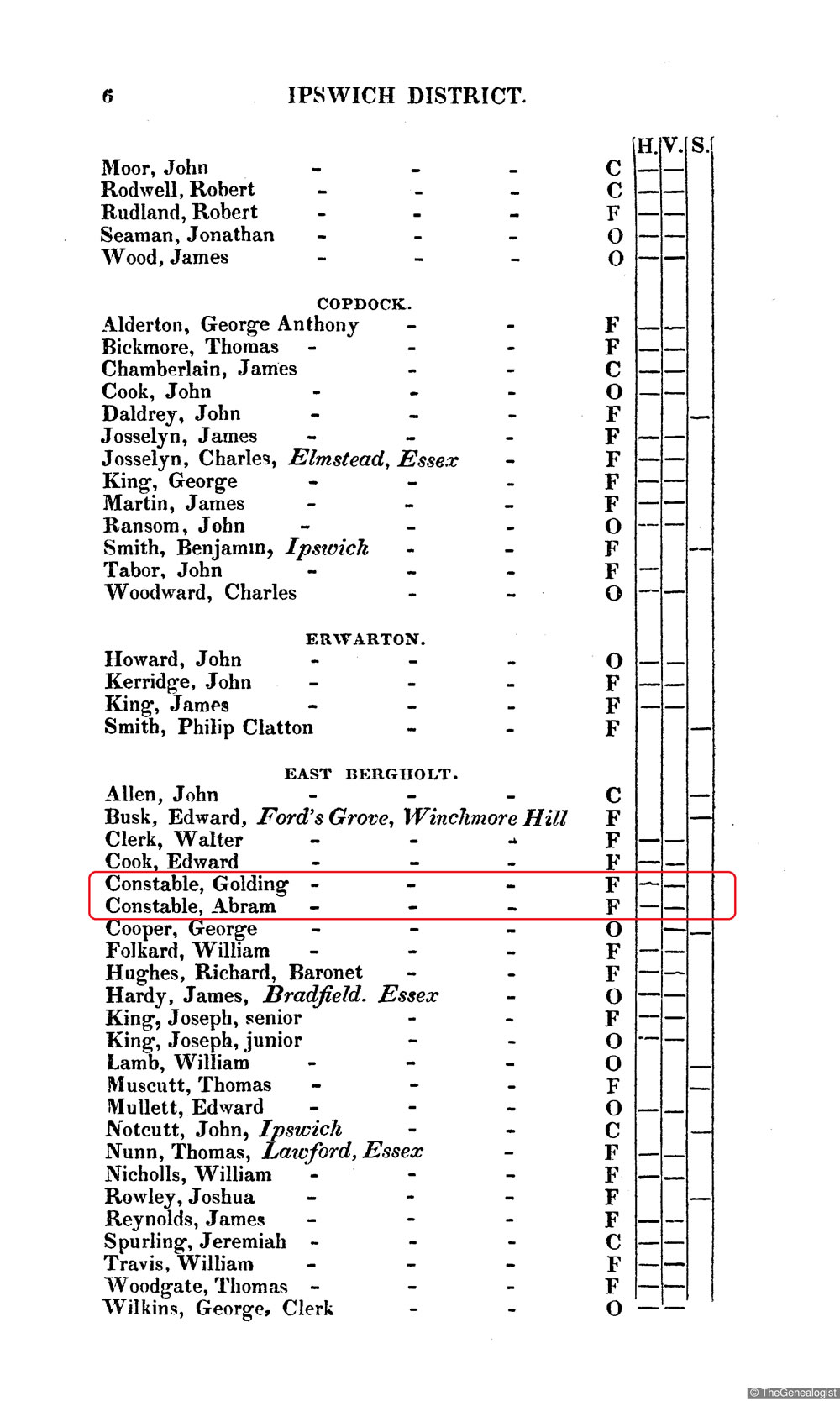 The Constable's cousin up in London

Golding Constable's first cousin had made it good up in London where he was a partner in a grocery business. Abram Newman, sometimes known as Abraham, went to London where he married Mary Davison whose brother, Monkhouse, was one of the partners in grocers Rawlinson and Davison. The business operated successfully in Creechurch Lane in the City as dealers in coffee, tea, chocolate, snuff, etc. Two years after joining Rawlinson and Davison Abram Newman was made a freeman of the Grocer's Company and, in 1764, he then joined his brother-in-law's company as a third partner. We can find Abram (recorded as Abraham) Newman listed in 1768 as one of the Livery of London citizens who had a vote as a result of being a freeman. His address is Fenchurch street where he had a house.

The senior partner of the company was Sir Thomas Rawlinson, a one time Lord Mayor of the City of London. In his later life he lived in Suffolk at Stowlangtoft Hall. Sir Thomas can also be found, eight years after being knighted, in the 1768 record in TheGenealogist's poll book database for The Poll of The Livery of London. He died in 1769, the year after this poll book had been drawn up and the company then became Davison Newman and Company for which it was known for many years. In 1773 some of the tea chests thrown into Boston harbour in protest over British taxes on the colonists bore the name of Davison, Newman & Co. 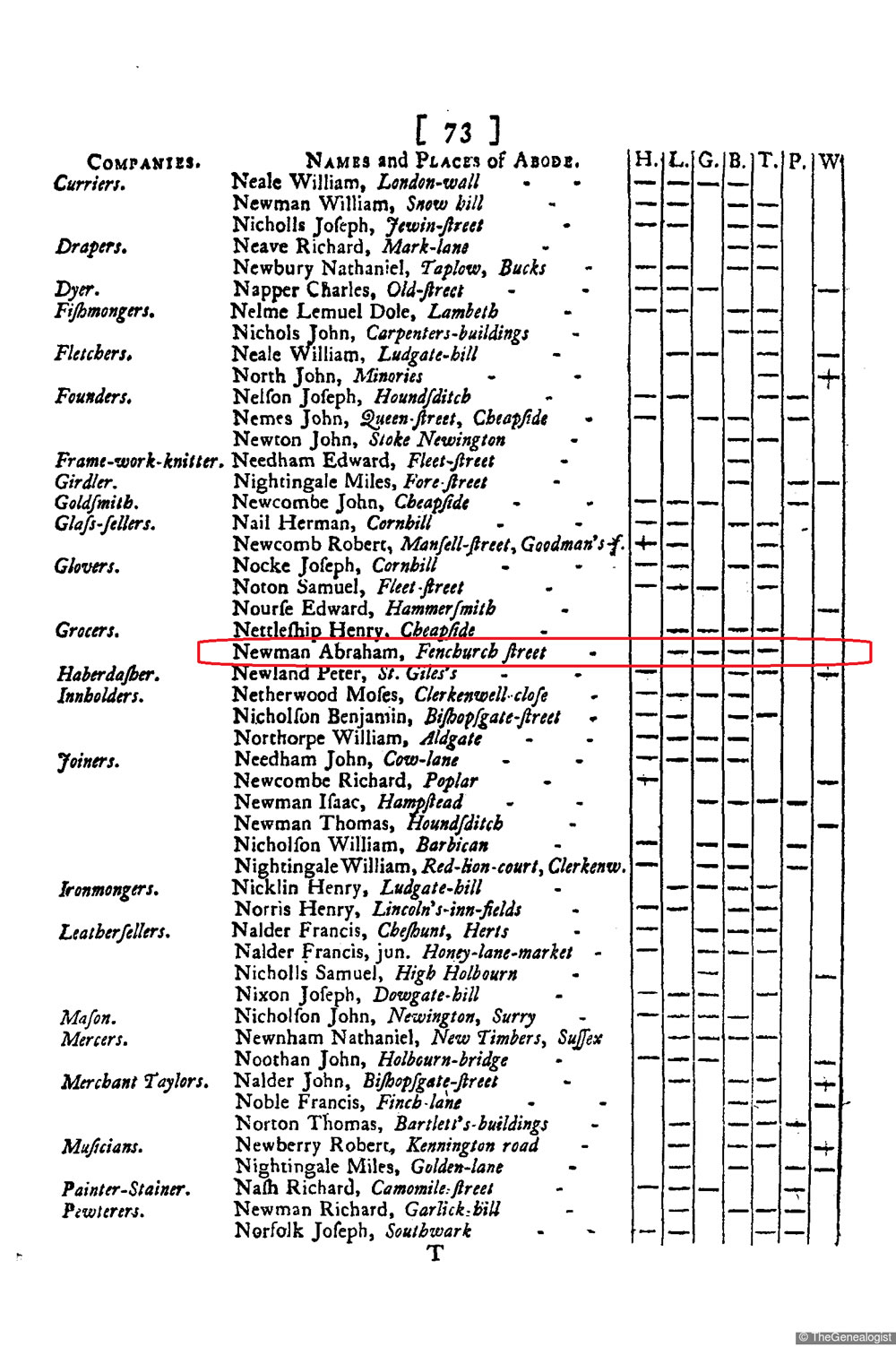 Abraham Newman 1768 the Livery of London citizens in 1768

With the death of Sir Thomas Rawlinson the Suffolk estate and title then passed to his son, Walter. A search of the Poll Book database finds Sir Walter Rawlinson recorded in the Suffolk Poll for 1790 where we can see that he backed exactly the same candidates as John Constable's father had in that election. 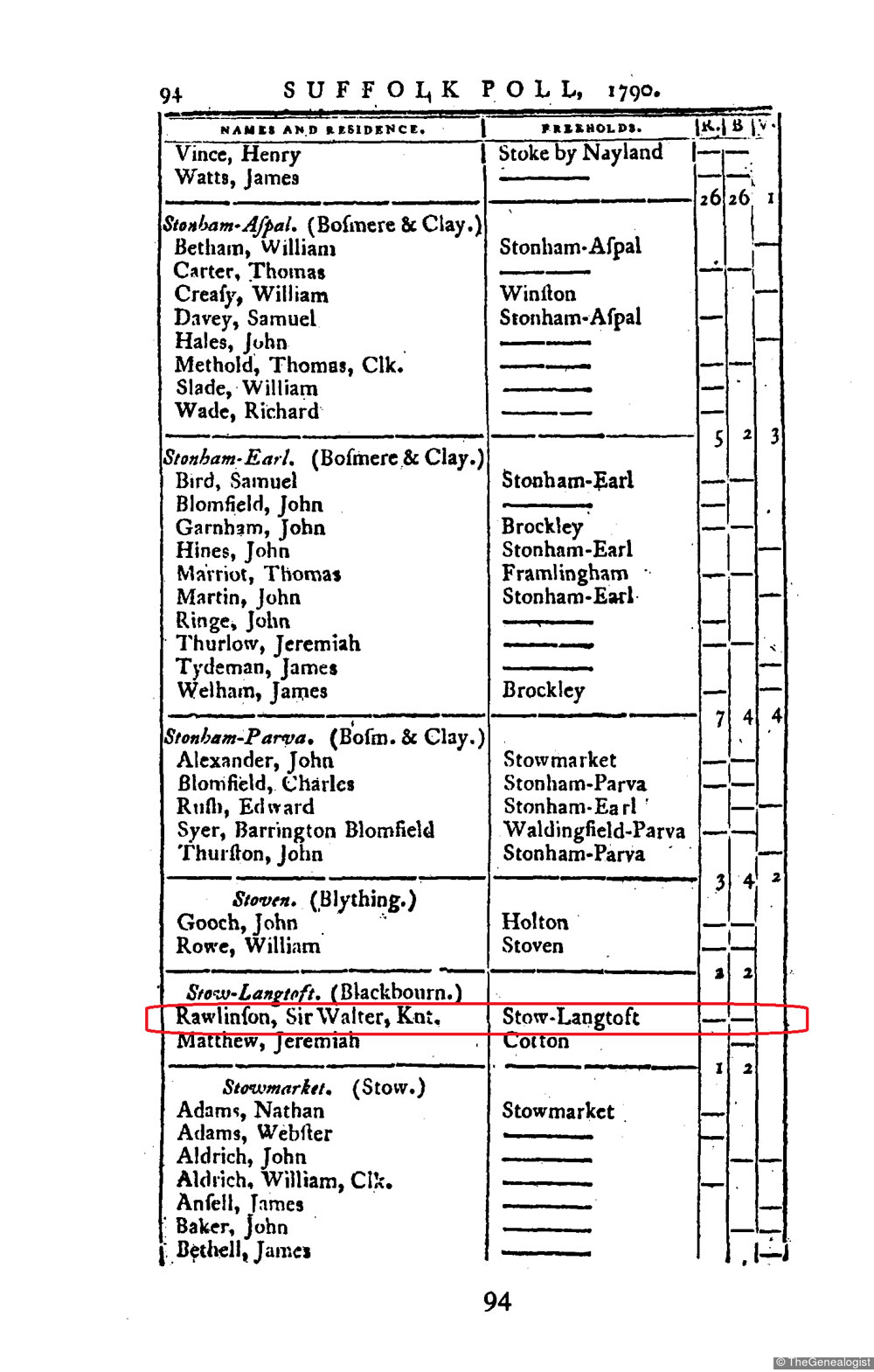 Elections were normally held every three years up to 1715, after which it changed to every seven years. This schedule could be upset if the government decided to call an election early and poll books were only compiled if there had been a contested election as if all agreed on two candidates to represent them then there was no need for an contest. These records can be used to find where ancestors who had a vote lived. As well as the poll book database TheGenealogist also has a number of searchable Poll Books, Voters Lists and Electoral Rolls for a variety of countries and includes the 2005 London Electoral Roll.