Royal Weddings in the News

With the marriage of Prince Harry to Meghan Markle on the 19th May this year we decided to look back at Royal Family weddings that have taken place in Windsor Castle's chapel during Victorian times. We can see how the traditions of pomp and ceremony echoes down through the years to our own era by taking a look at reports in TheGenealogist's Newspapers and Magazines collection. We find that Queen Victoria's eldest son and heir Albert, the Prince of Wales, and many of the Queen's other children were married here in St George's Chapel, Windsor. This Royal Peculiar of the Church of England is not subject to the jurisdiction of both the Diocese of Oxford nor the Province of Canterbury, both of which it lies geographically inside - instead it comes under the direct authority of the monarch.

While the present Duke and Duchess of Cambridge, William and Catherine, married at Westminster Abbey and Prince Charles's first marriage to Diana, Princess of Wales, was at St Paul's Cathedral in London, St George's Chapel has a long tradition as the place where royals marry. In recent times Prince Edward married Sophie Rhys-Jones before its altar in 1999, Prince Charles and Camilla had their union blessed there and the son of Princess Anne, Peter Phillips, married Autumn Kelly within its walls. This year it will see not only the marriage of Prince Harry to Meghan Markle, but also that of Harry's cousin, Princess Eugenie, when she weds Jack Brooksbank in October 2018.

The Newspaper and Magazine records on TheGenealogist enables us to look back to an illustrated report in March 1863 on the Royal nuptials of Prince Albert Edward (Bertie) The Prince of Wales to his bride, Princess Alexandra of Denmark. The report allows us to see the couple before the altar. 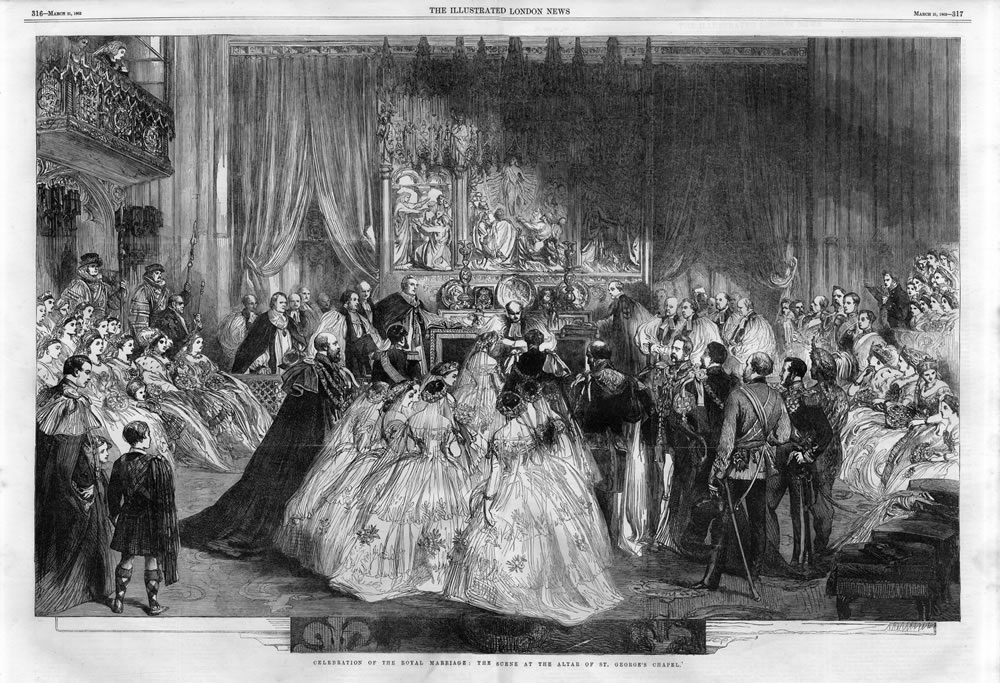 Two of Bertie's sisters, The Princess Helena and The Princess Louise married here in 1866 and 1871 respectively. Then on 13 March 1879 another of Victoria's sons, Prince Arthur the Duke of Connaught, married Princess Louise Margaret of Prussia. The bride was the daughter of Prince Frederick Charles and was a great-niece of the German Emperor, Wilhelm I who was also Arthur's godfather. 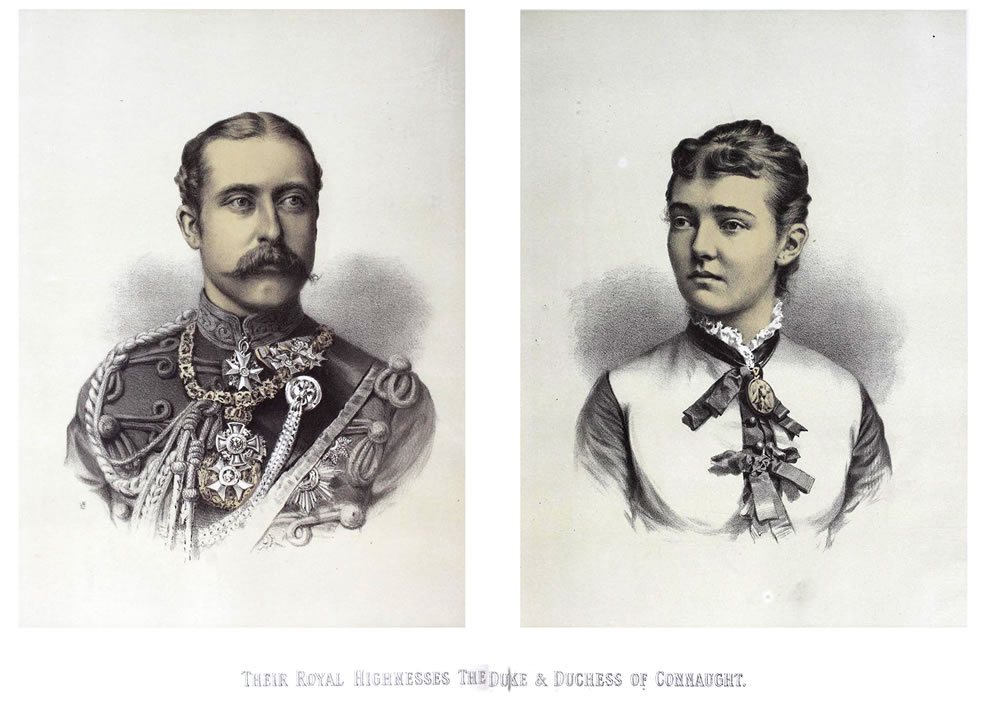 Searching further we can come across a sketch in The Illustrated London News from the time that shows a familiar scene of British pageantry - the ceremonial that we expect to see repeated at Harry and Meghan's wedding with the planned open carriage procession and guardsmen in bearskins. 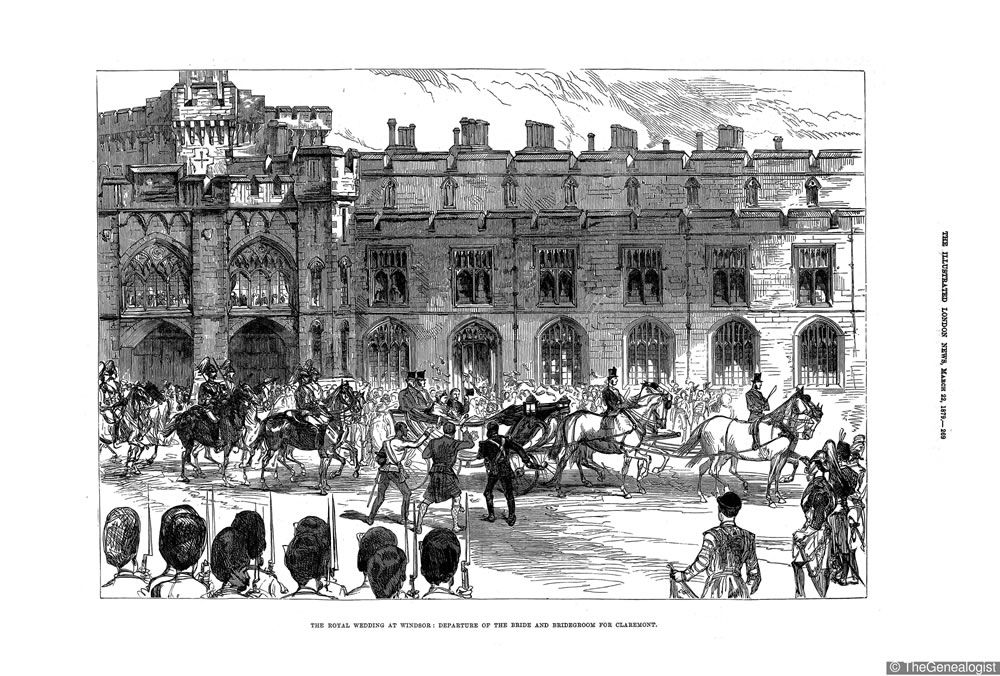 Departure of the Bride and Bridegroom, The Duke and Duchess of Connaught, in The Illustrated London News 22nd March 1879

As with the current press, there was a lot of interest in the marriages of the Royal couples. Prince Arthur, the third son of Queen Victoria, had been given the title Duke of Connaught in 1874 by his mother and so Princess Louise became the Duchess of Connaught on their marriage. Today the expectation is that on the marriage of Prince Harry and Meghan Markle, the present Queen will bestow one of the currently defunct titles on her grandson and his new wife. Some believe that it will be the Dukedom of Sussex, but other royal experts are not ruling out the possibility that Her Majesty could opt for Connaught. While Connaught was then in the United Kingdom, it is now in the Republic of Ireland and so this could be controversial in current times.

Just as the media today will be quick to show the world images of the wedding dress that Meghan choses to wear, it was within days that the Victorian papers were providing readers with sketches of the bridal dress that Princess Louise Margaret had worn together with her 'Promenade dress' and 'Evening dress'. 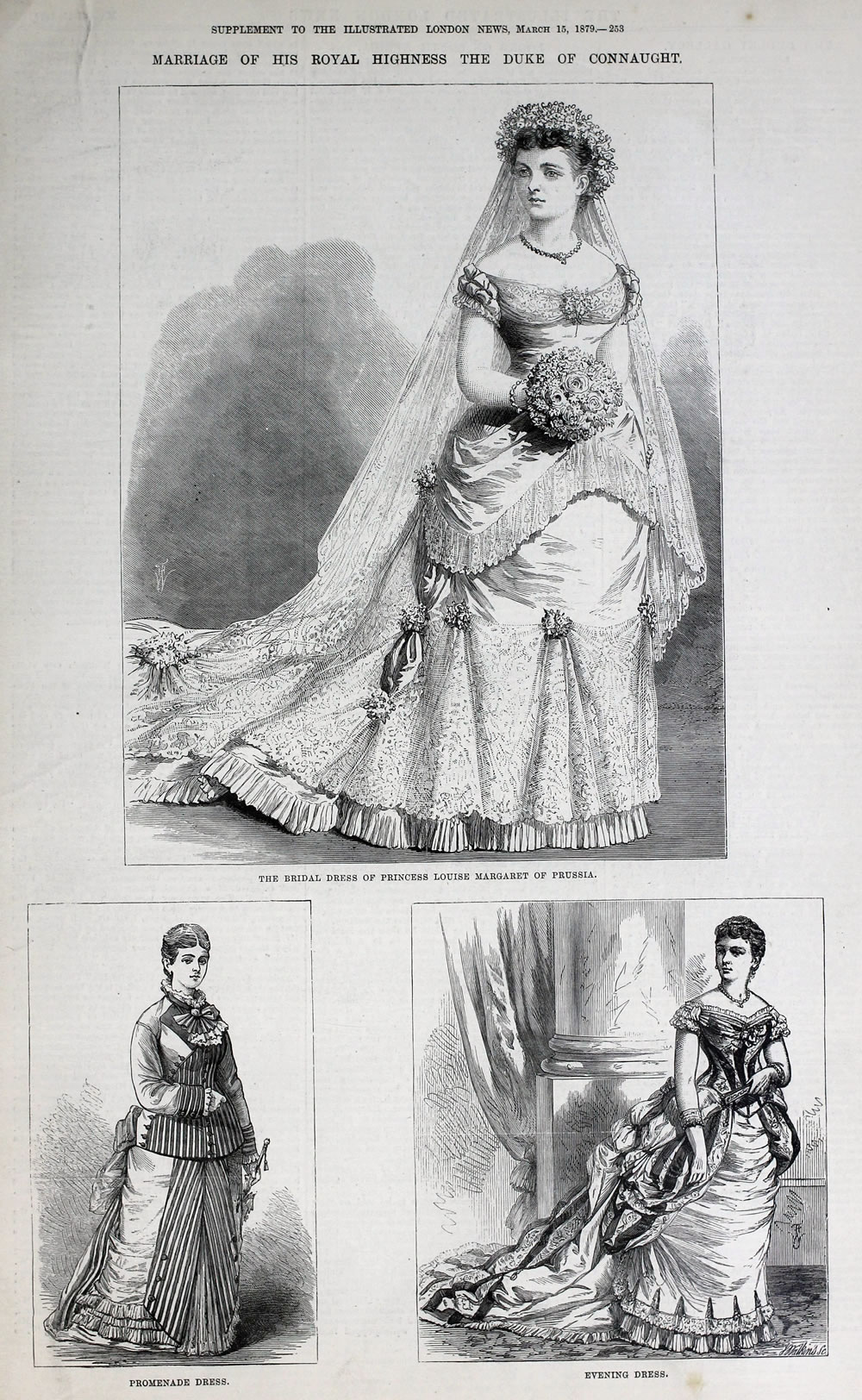 Today we can expect the television cameras to beam pictures around the globe of the scene at Windsor. On 27th April 1882, the marriage of Queen Victoria's eighth child and youngest son, Prince Leopold the Duke of Albany, took place and it was the newspapers that, a few days later, provided pictures of the crowds lining the route. Our search on TheGenealogist finds The Queen's Procession to St George's Chapel reported in the 6th May edition of The Illustrated London News with the route lined by cheering people. 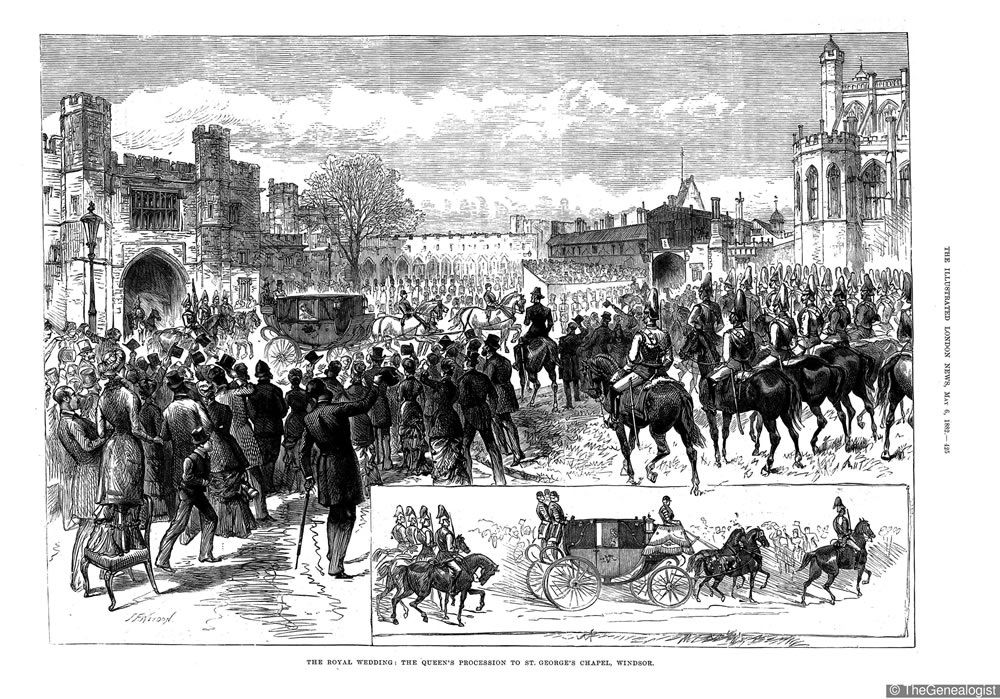 The Queen's Procession to St George's Chapel at the end of April 1882 reported in the May 6 edition of The Illustrated London News showing the delighted crowds in Windsor.

This paper also provided its readers with a picture of the inside of St George's Chapel at the time of the marriage ceremony that had taken place a few days previous. The picture shows a church that, apart from the dress of the Victorian dignitaries attending the service, appears very much as it will on Prince Harry and Meghan Markle's wedding day. 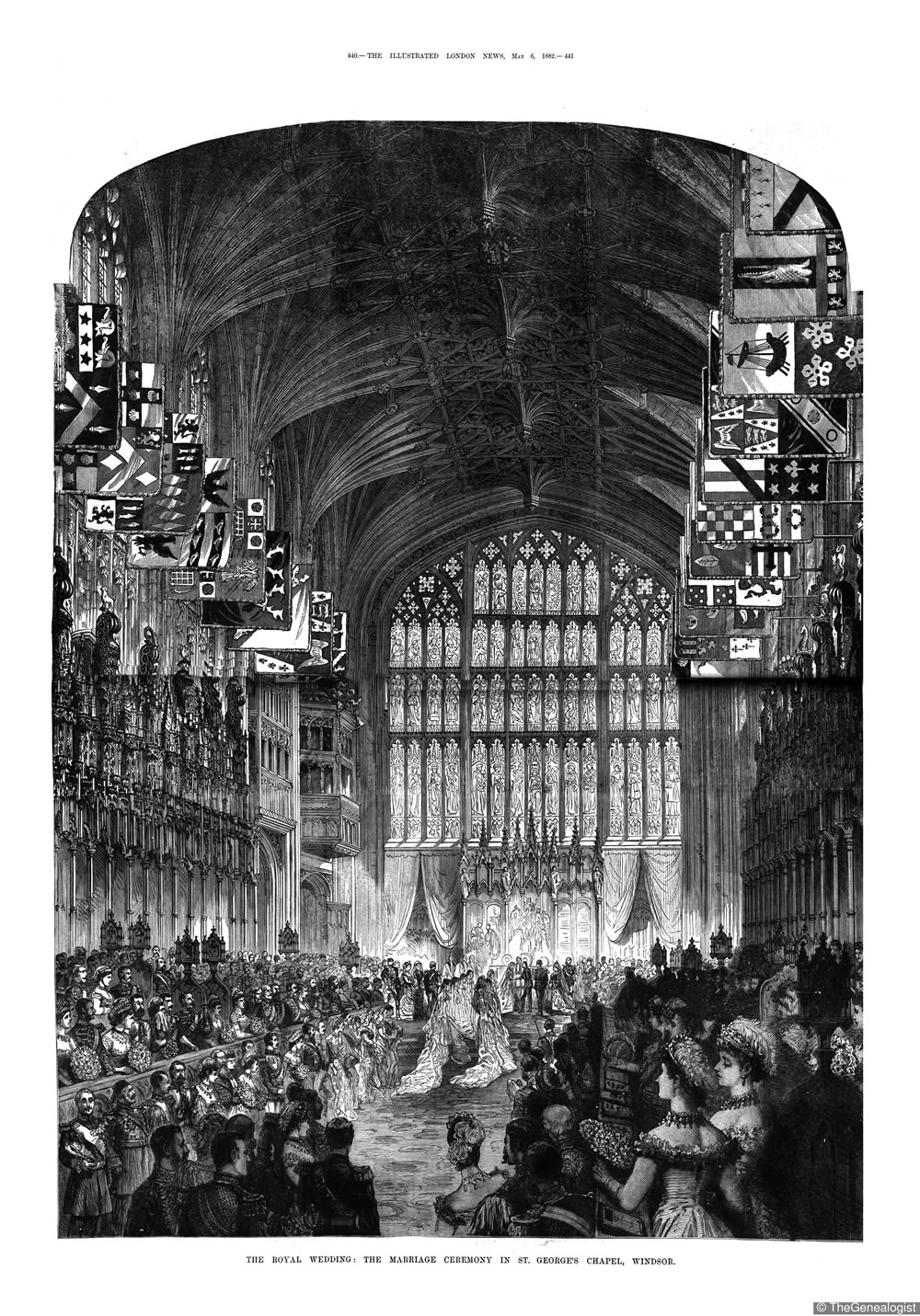 When Prince Harry makes his way to the altar on 19th May 2018, while he may be sporting the beard that he has grown in the past few years, it is unlikely that we will see the types of moustaches that some of Prince Leopold's supporters displayed.

As the 21st century Royal Family gather in Windsor for the current wedding ceremony and celebrations, we will no doubt see many echoes from the past. Much of the pageantry, protocols and religious detail would have been familiar to our ancestors. TheGenealogist's Newspapers and Magazine records can help us to think about the social history of the times that our own forebears lived through and provide us with a backdrop to what happened in their world. When used with the many other records available to us for researching our ancestors on TheGenealogist, we can add a rich background to the story of their lives. 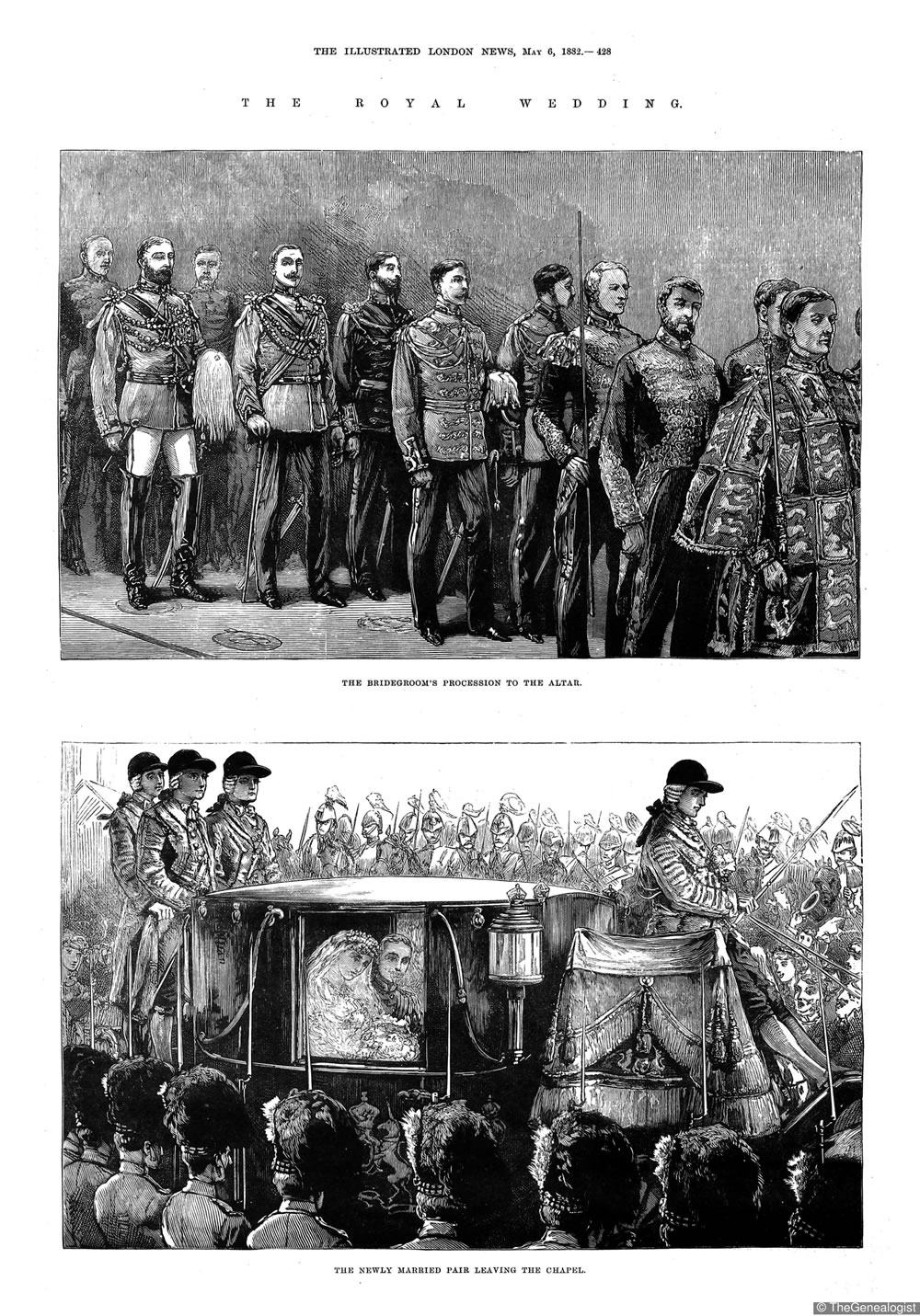