"Be it ever so humble, there is no place like home" – find occupiers and owners from country houses to ordinary cottages

With the addition of the colour tithe maps for Bedfordshire to the National Tithe Record Collection on TheGenealogist we can now view the plots of land where ancestors lived or worked on detailed colour maps. This is in addition to the already published greyscale versions. With fully searchable and linked apportionment books this allows researchers to discover the plots of land our Bedfordshire ancestors owned or occupied in this massive Victorian land survey. 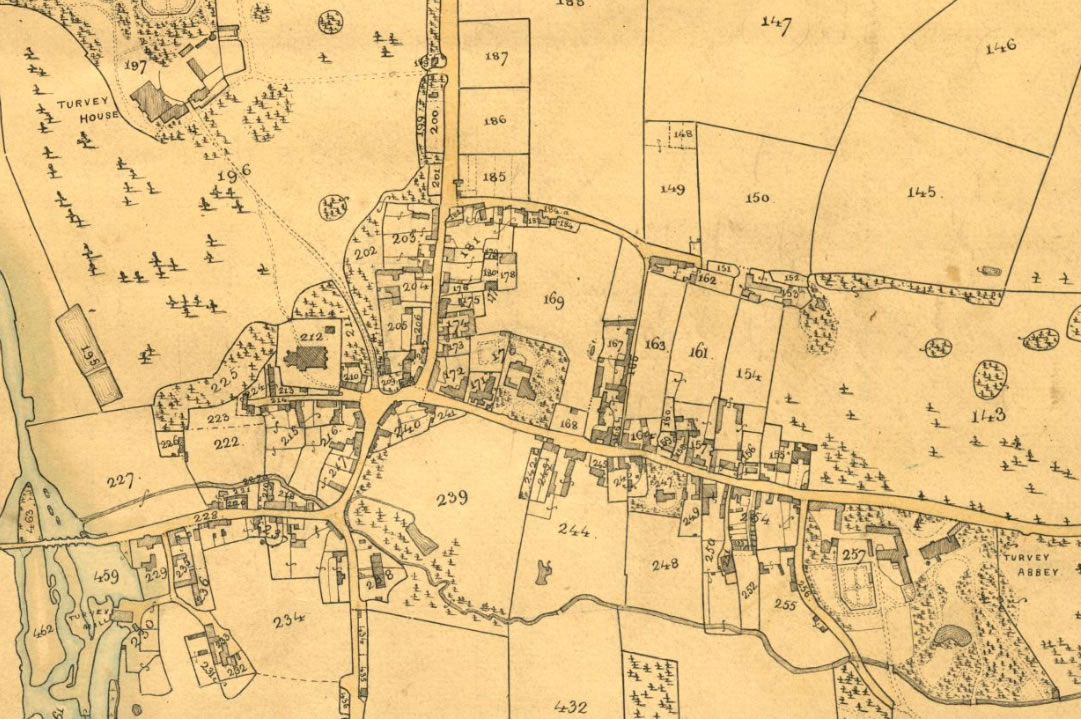 The great advantage of this recordset is that it is not just the wealthy landowners who are caught by this study. A great example of this is in the Parish of Turvey, Bedfordshire that was surveyed in June 1837. If we zoom in on this village we can see a large number of fields, some pastures, plantations and a settlement of houses in the village itself. Immediately we are aware of the large country house, noted on the map as Turvey House, and situated to the north-west of the church. Glancing at the land to the east of the village, we see that on the main road to Bedford that there is another significant property marked on the plan as Turvey Abbey. Zooming out on the map reveals substantial land to the south of this second country house that appears to be part of the Abbey's estate. Further down the Bedford road, to the east of Tovey, is another large property called Picts Hill House. What all these residences have in common is that they are owned by different gentlemen who shared the surname Higgins.

The owners and occupiers of these large properties were, of course, all related, belonging to branches of the same family. The Higgins first came to Turvey in about 1786 when three gentlemen got together and purchased the village of Turvey from the 5th Earl of Peterborough. The buyers were Charles Higgins (1725-1792), a rich grocer and sheriff from London, his half cousin once removed, John Higgins of Weston Underwood (1740-1813), and thirdly a banker from the City of London called William Fuller. Turvey House and Turvey Abbey, together with their estates then became the homes of the two branches of the Higgins family who were still living there at the time of the Victorian survey. 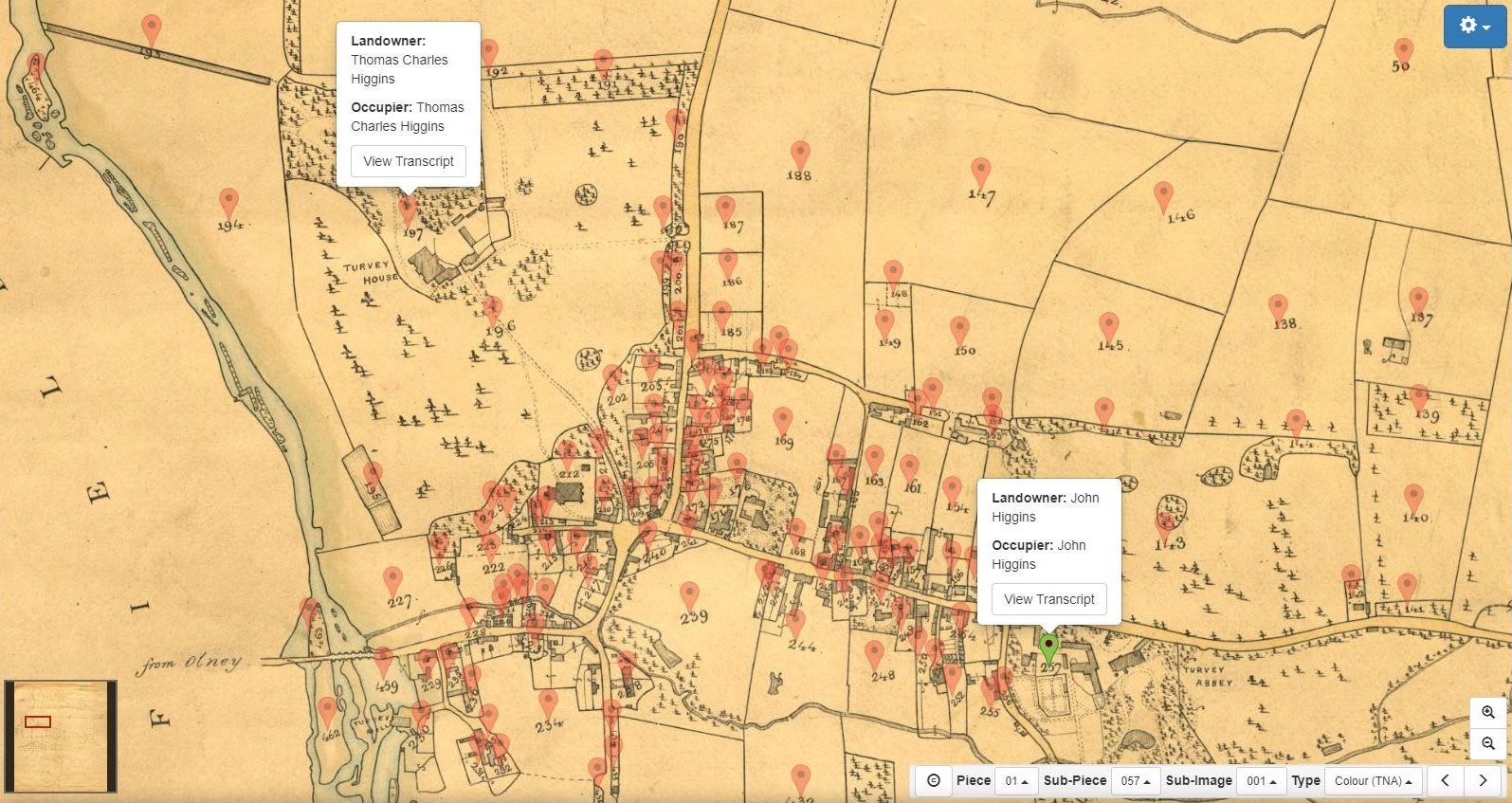 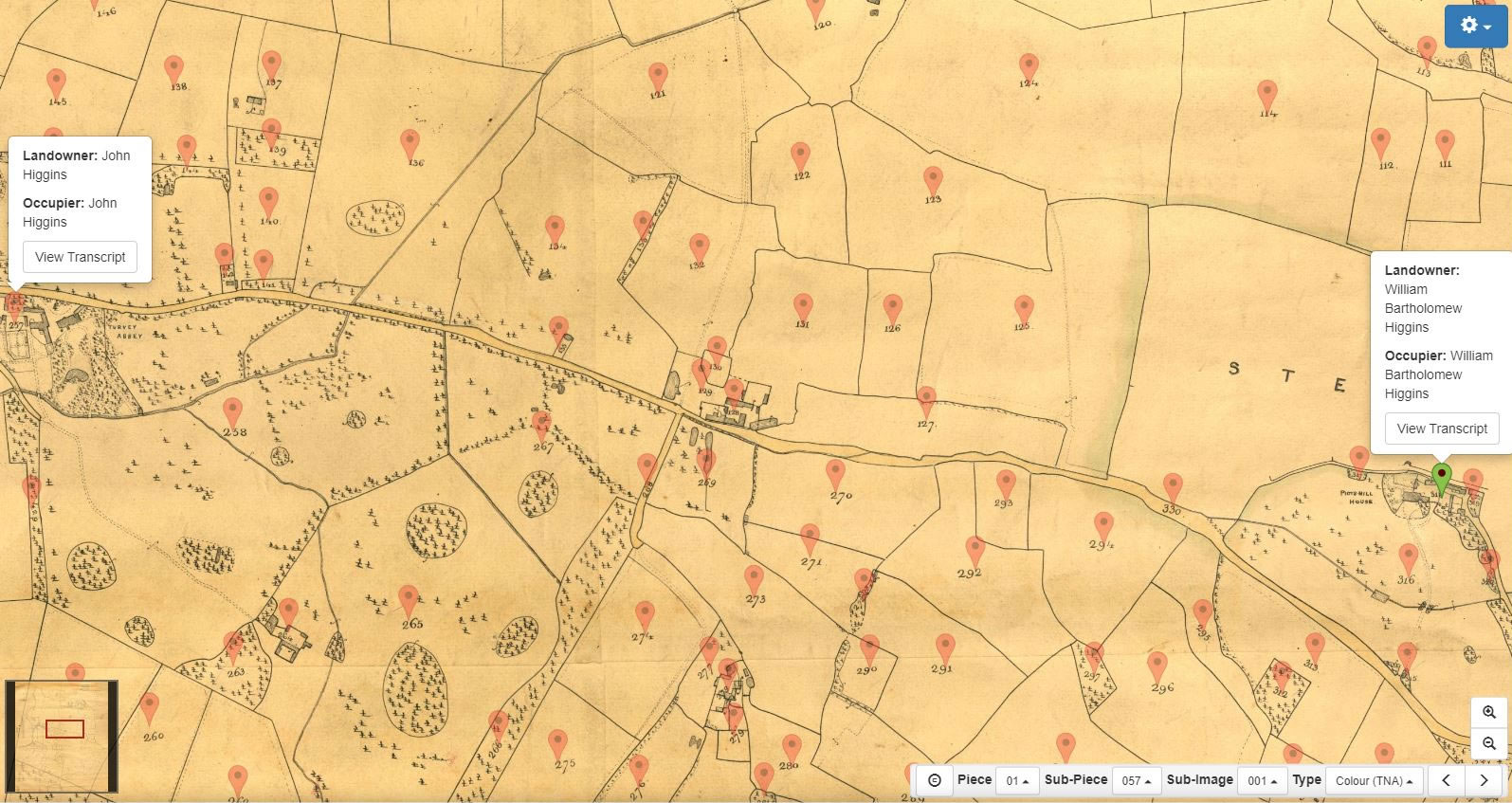 The Higgins of Turvey Abbey

The Abbey was so named after the lands held here once by the Abbey of St. James at Northampton and not because it had been a religious house (though in modern times the country house has become a Roman Catholic community of Benedictine nuns). The Jacobean house that stands back from the roadway and the Turvey Abbey estate was owned by the rich grocer Charles Higgins until he died unmarried in 1792. At this time he was succeeded by his artist nephew who, somewhat confusingly, was also named John Higgins and so became Lord of the Manor at Turvey Abbey. It is this gentleman that was the owner and occupier that the Tithe survey captured in its records on 13 June 1837. 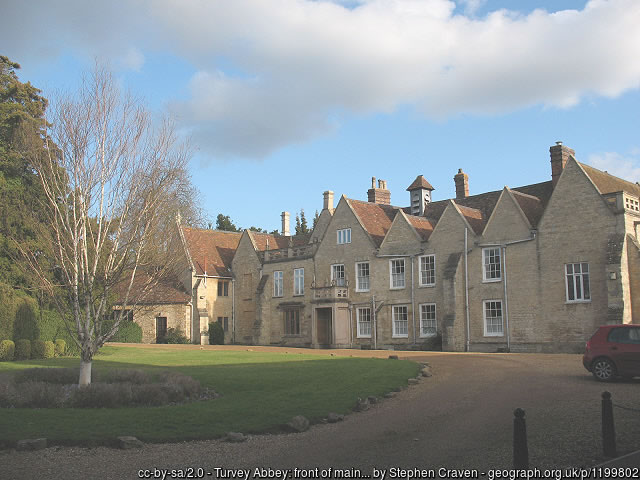 The Higgins of Turvey House

Turvey House in the west, on the other hand, had been constructed in the Italian Style and overlooks the River Ouse at the entrance to the village. It had been built in the 1780s by John Higgins of Weston Underwood (1740-1813) as a home for himself and his wife Martha in the 1780s. By June 1837 Turvey House was in the hands of their son Thomas Charles Turvey (1797-1865). The year after the Tithe Survey was recorded, Thomas married Charlotte Price. 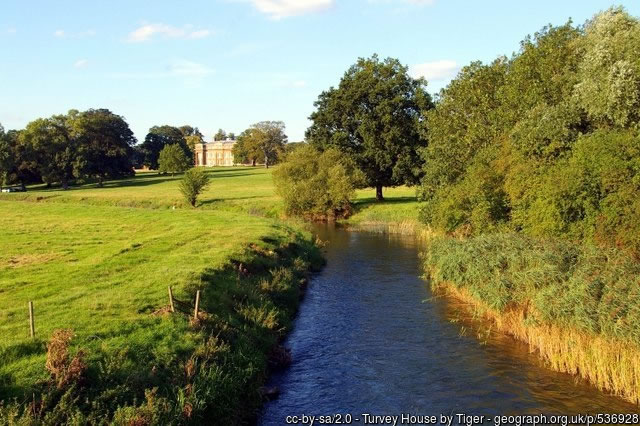 Turvey House next to the River Ouse

The Higgins of Picts Hill House

The Tithe survey identifies the third Higgins of Turvey as the owner and occupier of Picts Hill House. His name was William Batholomew Higgins – and he turns out to be the son of John and Martha Higgins of Turvey House and the younger brother of Thomas Charles then at Turvey House. Picts Hill House had once been part of the land in the ownership of that side of the family and when Lt Col William Bartholomew Higgins (1799 - 1878) died unmarried, the house would then pass to his nephew, who also inherited Turvey House from his parents and so the properties were reunited.

Tithe records are not just about the large houses

Some family history researchers may think that the tithe records are only about finding the rich landowners, but this is far from the truth as the survey also identifies occupiers of smaller plots as well. Because of this we are able to identify that John Higgins of Turvey Abbey had a number of tenants, some of which had possession of land with which to farm on. But the apportionment books also identifies people who occupied small houses and cottages. As an example we can see one of John Higgins's tenants named William King who lived in a small cottage with a garden just down the road from the Abbey on the main route out of the village towards Bedford. 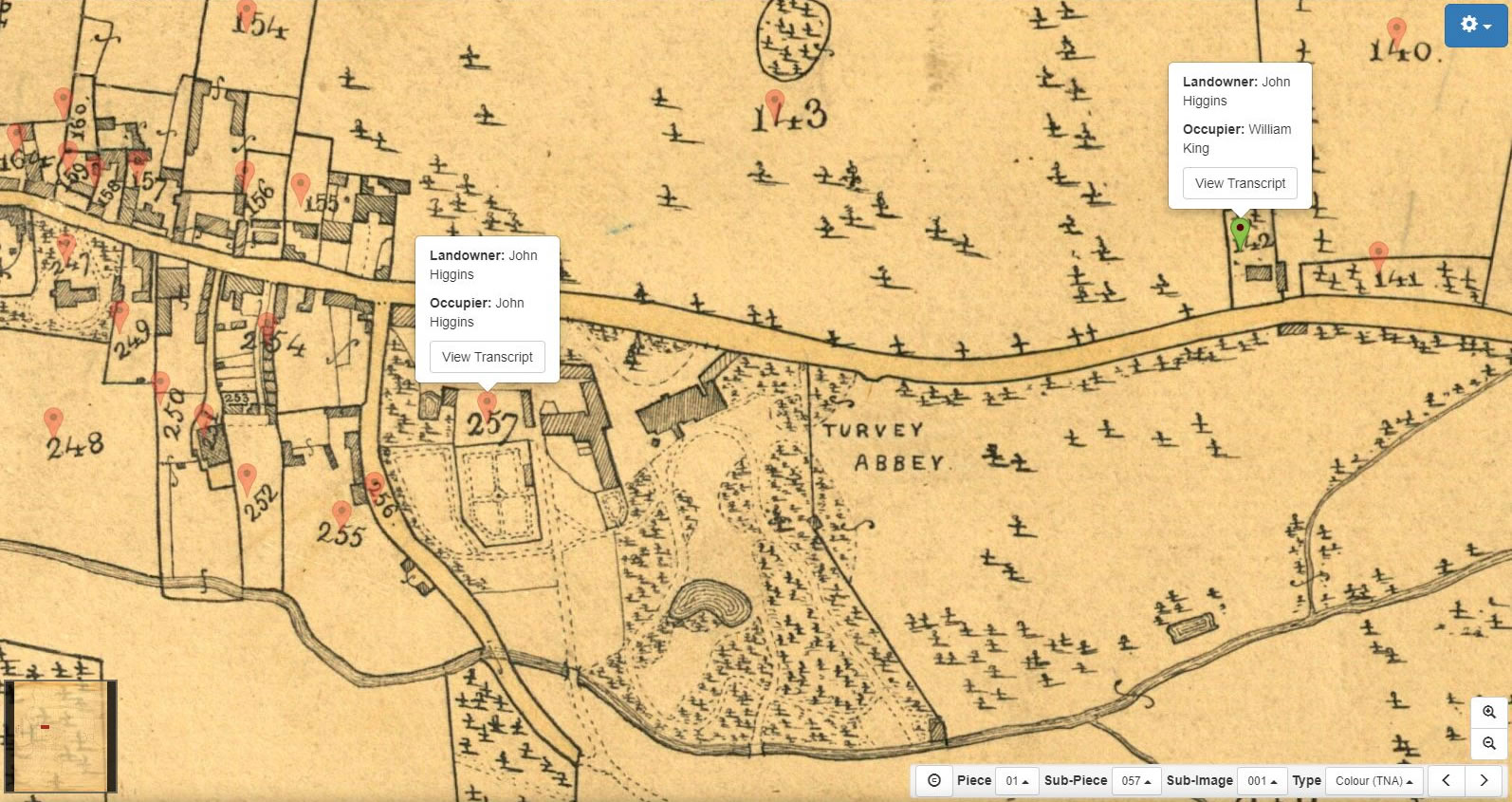 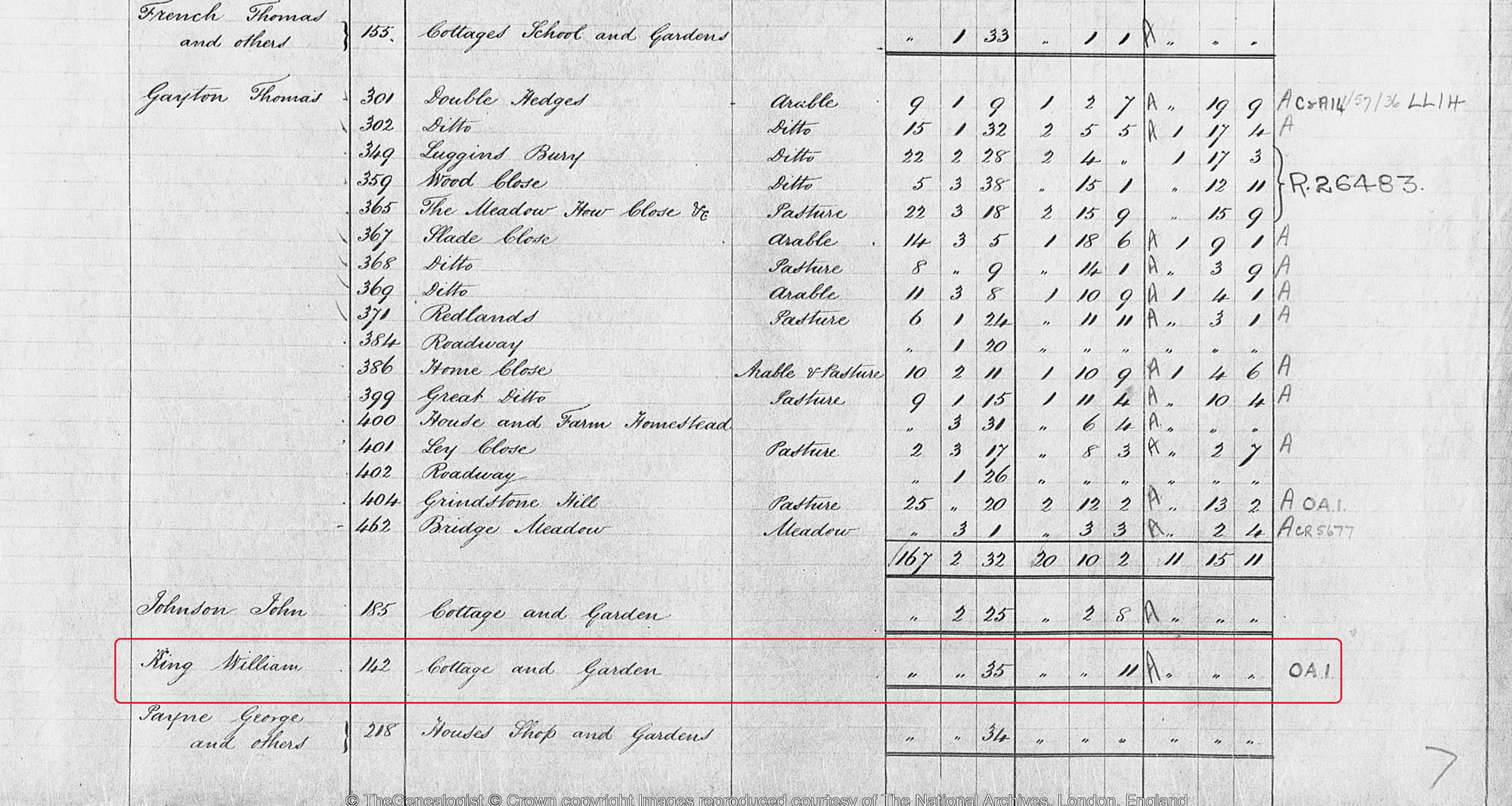 For family history researchers with ancestors from Bedfordshire, these colour tithe maps and their linked apportionment schedules can reveal the exact plot that a Victorian ancestor lived or farmed, whether it was a country estate or a cottage. In the example here we have found the land owned and occupied by different branches of the Higgins family of Turvey and a tenant in a cottage.