First World War Regimental histories can reveal some fascinating details for family historians tracing their ancestors in World War I.

These publications often provide details of battles and campaigns that the regiments were involved in and also lists the officers, and in some cases the men. They typically include various details relating to honours and medals awarded in the conflict. These military histories concentrate on a particular regiment, battalion or division and typically give a good account of the men’s progress across the battlefield usually including maps for better understanding the geography.

Most of these narratives will also name men and officers who had distinguished themselves on the battlefield and so if your soldier ancestor had been involved in some action at the time, that deserved a mention, then these records could fill in the story of their war for you.

A case in point are the details that we can read in The Irish Guards in the Great War 1914-1918, Volume II about the circumstances under which Lance-Sergeant Jack Moyney was recommended for his Victoria Cross. In September 1917, Moyney was in charge of 15 men in two advance posts north of Broenbeek, Belgium, when they found themselves trapped by the enemy. From details in other records on TheGenealogist we know that he was a recipient of the V.C. – for example, his listing in the pages of the Army List 1938. 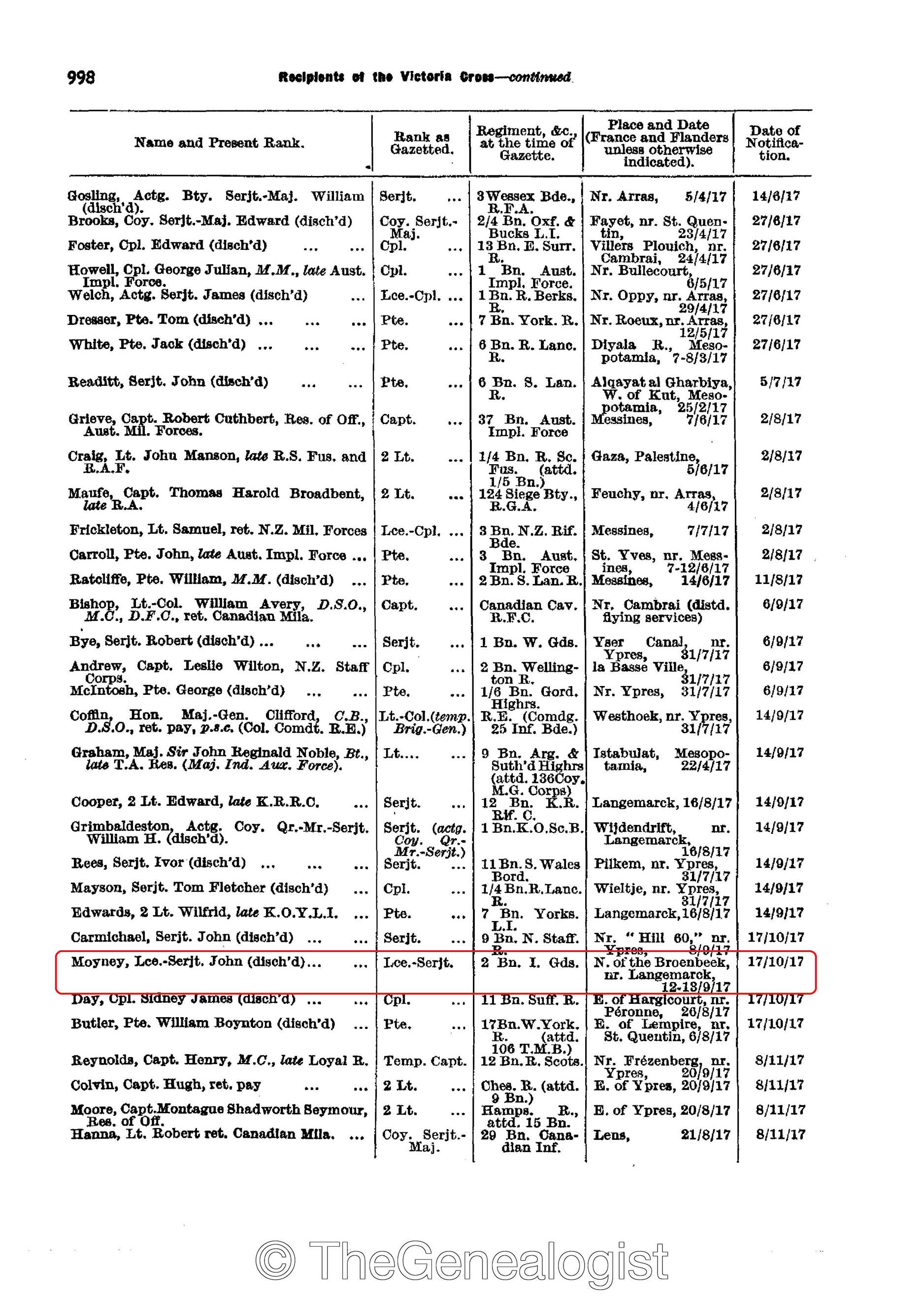 Another result found for Sergeant Moyney is in the Newspapers and Magazines collections on TheGenealogist where there is a thumbnail piece in The Great War Newspaper for January 18th 1919. It is a short paragraph and serves to whet the appetite to discover more about this brave Irish Guardsman. 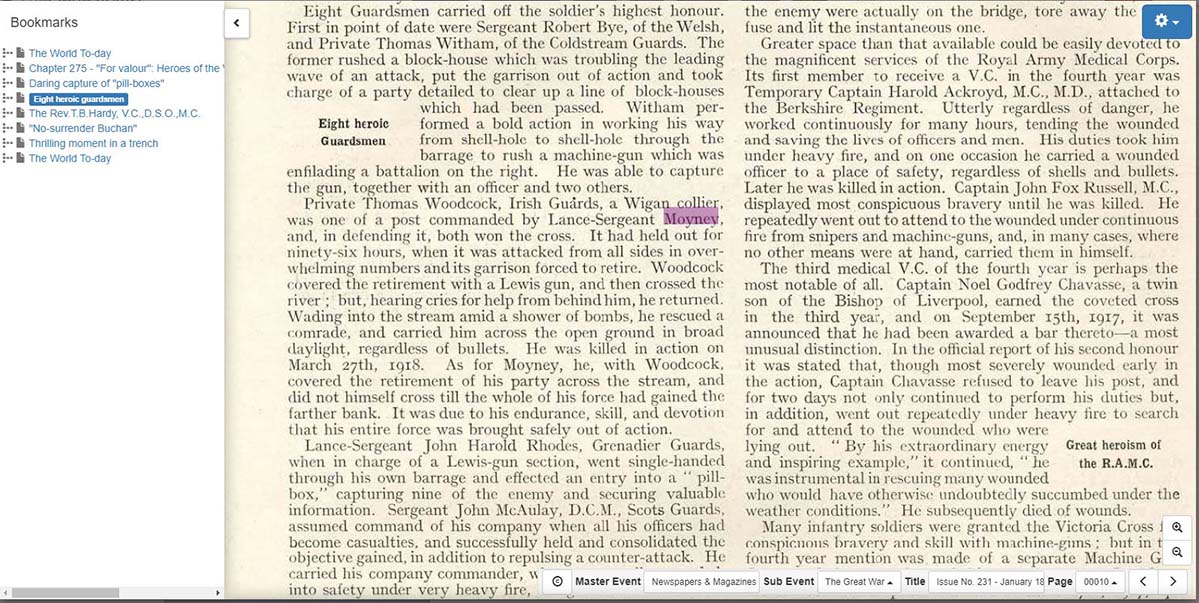 The Great War January 18, 1919 from TheGenealogist’s Newspaper and Magazine records

Turning to the regimental records that are available on TheGenealogist we can do just this. The histories are compiled from the diaries and papers of the regiment and so the reader can follow its progress through the theatre of war. The particular regimental history for The Irish Guards’ Second Battalion had been edited by none other than Rudyard Kipling and so it is written with a certain literary flourish that makes light of some of the terrible action. This can be witnessed in its description of the return of Lance-Sergeant Moyney and his men to headquarters.

‘By five o'clock
the hostile barrage seemed to have quieted down
along our front, but the right of the Brigade sector
seemed still to be at odds with some enemy; so the
Brigadier kept our local barrage hard-on by way of
distraction. And at half-past six, tired, very hungry,
but otherwise in perfect order, turned up at Brigade
Headquarters, Sergeant Moyney with the remainder
of No. 3 Company's platoon which had been missing
since the 12th. He had been left in command of an
advanced shell-hole post in Ney Copse with orders
neither to withdraw nor to let his men break into
their iron ration.’

There are several more pages that detail more about how the brave Irishman and his Guardsmen escaped when the enemy had them trapped – and all are written in this matter or fact style with lines such as: ‘It was quite a success’.

‘The Sergeant allowed them
to get within twenty-five yards and then ordered his
men to " jump out and attack." It was quite a
success. Their Lewis-gun came into action on their
flank, and got off three drums into the brown of
the host while the infantry expended four boxes of
bombs at close quarters. "Sergeant Moyney then
gave the order to charge through the Germans to the
Broembeek." It was done and he sent his men across
that foul water, bottomed here with curly barbed-
wire coils while he covered their passage with his one
rifle.’ 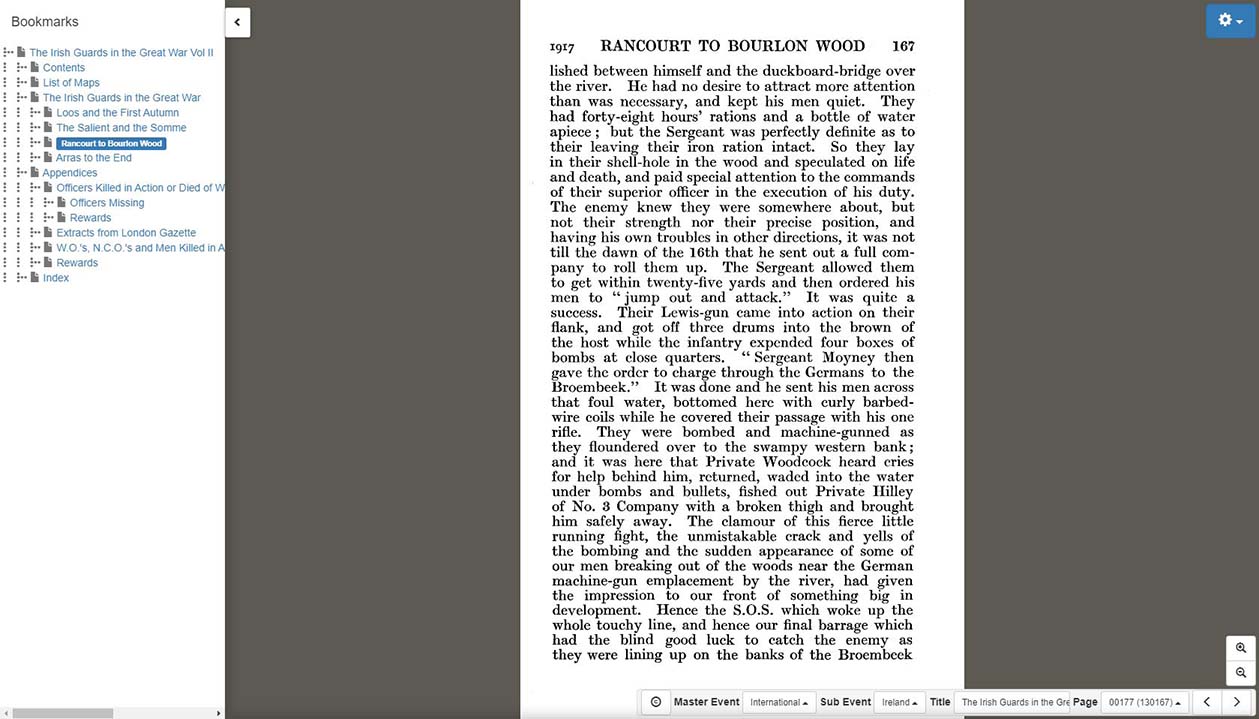 The Irish Guards in the Great War 1915-1918, Volume II from the Regimental Records & Histories on TheGenealogist

Notwithstanding the slightly peculiar reporting in this particular example, that seems to be making very light of the action in what was a horrific war, the usual template for this type of book is then followed by the inclusion after the diary report of several appendices. These list the men and officers of the 2nd Battalion, as well supplying the name of those who were given military awards. From this section we can see that Jack Moyney was not only awarded the VC but also, under the Foreign Decorations in appendix C, the Médaille Militaire from France. 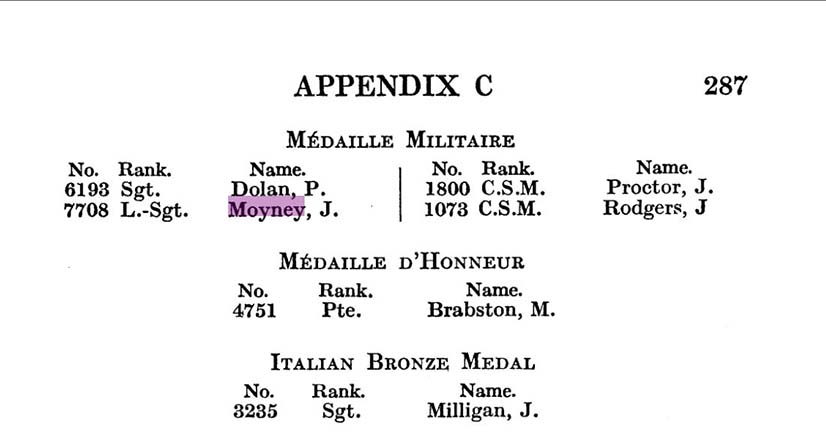 If you have a soldier in your family that was in one of the regiments, battalions or divisions covered by the collection on TheGenealogist, then you will no doubt find the information on their movements invaluable to obtaining a greater understanding of your ancestor’s war.