The Grand Prix driver William Williams was only 42 when the Nazis executed him in 1945. He had been born to a French mother and an English father on 16th January 1903 in the suburbs of Paris. His father, a horse breeder named Frederick Grover, had moved to France from England and then fell in love and married Hermance Dagan, a French woman. The family grew to have four children and after the First World War the Grovers moved from Paris to the stylish riviera where they set up home in the Principality of Monaco. One of their sons, called William Charles Frederick Grover at this time, gained his driving licence in Monaco and began racing motorcycles. It is said that he had adopted the pseudonym W. Williams so as not to alert his family that he was participating in the dangerous sport of motor racing. 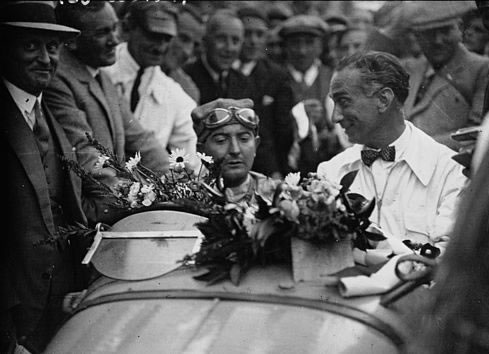 When the mysterious W. Williams won the inaugural Monaco Grand Prix in 1929 while driving a dark green and privately owned Bugatti T35B, he came to the attention of motorsport enthusiasts. Racing a number of Bugattis he went on to get another seven Grand Prix wins under his belt between 1928 and 1933, establishing himself as a top Grand Prix driver. In the 1930s, however, he had effectively retired from the sport and now lived a comfortable life in France with his wife out of the danger that he had once faced on the track. Then war broke out! 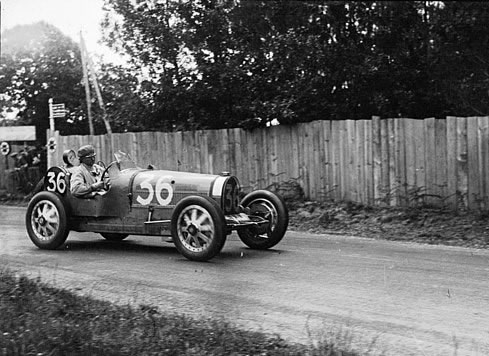 William fled to England when France fell to the Germans in World War II. In England he joined the British Army and was commissioned into the Royal Army Service Corps. With his skill in the French language and his knowledge of the country he was an obvious candidate to train to work as an agent for the Special Operations Executive (SOE). Returning to France as an undercover special agent he organised and coordinated a network of operatives in a secret circuit named Chestnut. Being friends with fellow racing car driver Robert Benoist he recruited him to join the SOE and they established sabotage cells in their region, as well as reception committees for Allied operatives parachuted into France.

In August 1943 the former Grand Prix driver turned SOE Captain suffered a turn in fortune. His luck ran out and he was captured by the Nazis and shipped off to Berlin for questioning. The Germans interrogated him for a time before imprisoning him in Sachsenhausen, a concentration camp 22 miles north of Berlin. This camp was a place where many executions took place throughout the war, but it would not be until the spring of 1945 that Grover-Williams's time would finally run out. The one-time racing ace and brave SOE agent was executed at the concentration camp in Germany sometime in February or March 1945. The official Casualty lists that have been released on TheGenealogist tells us that at first he was reported as "Missing". Then the British authorities changed his status to one of "Killed in Action" on or shortly after 1 February 1945. Eventually, this was modified once again to be on or after 18 March 1945 reflecting that the intelligence London received was not precise.

T/Capt W.C.F.G. Williams now presumed Killed in Action in the WO417 records on TheGenealogist

While this is in line with the accepted story of his death, and in reality the probable truth a tale emerged that claimed he didn't die in the concentration camp. According to Wikipedia and Motor Sport magazine from the time, the tale says that Grover-Williams may have actually survived the war and then lived out his life under an assumed identity back in France. Not in secret, however, but as Monsieur Georges Tamba - the man who after the war lived with Grover-William's widow!

Looking at the recent records released on TheGenealogist, and sourced from the WO 417 series at The National Archives, we can find T/Capt W.C.F.G. Williams in the list of casualties. The official record is a little coy about his membership of the SOE and that his death was as a result of execution at the hands of the Nazis, prefering to list him as being on the General List. A further search of TheGenealogist also returns him listed in a General Register Office (GRO) death index record for war deaths and his name is found carved on one of the memorial plaques on the Brookwood Military Cemetery, which can also be seen on TheGenealogist. So if the account about him surviving WWII is true then some effort has been entered into building a backstory of his demise. The truth behind this story will always remain a mystery.

The French Champion racing driver, Captain in the British Army and SOE agent

Also found in the WO417 records and on another panel of the Brookwood Memorial is Grover-William's racing driver contemporary, Robert Benoist. While Grover-Williams was half French/half English, his compatriot was a Frenchman. Robert Marcel Charles Benoist had been born near Rambouillet, Île-de-France in France as the son of the gamekeeper to Baron Henri de Rothschild. When he was a young man, Benoist had joined the French infantry to serve in World War I. With the introduction of aeroplanes he had then become a fighter pilot in the new Armée de l'Air and ultimately progressed to become a flying instructor. After WWI the thrill seeking Benoist went into motor racing and in 1927, driving a Delage 15-S-8, he won the French, Spanish, Italian and British Grand Prix races for the French car marque. He then joined the Bugatti team and before the Second World War he had risen to run the company's racing department. 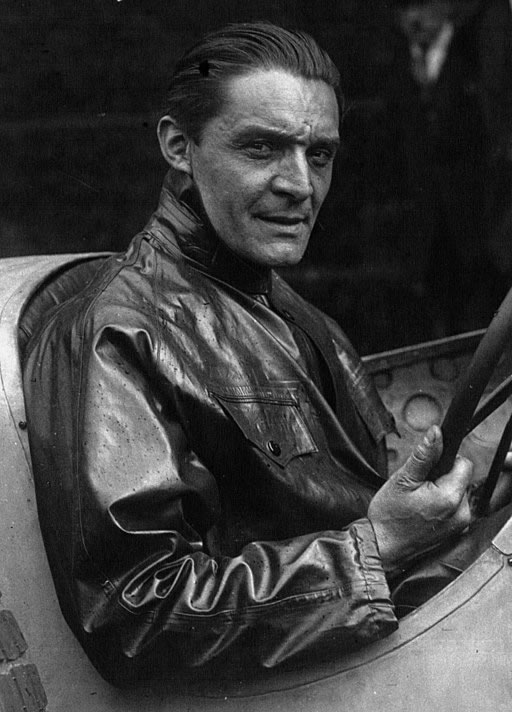 Robert Benoist behind the wheel at Monza, 1927

With the German occupation of France he too escaped to Britain where his old friend, Grover-Williams recruited him into the SOE. Benoist was commissioned as a Temporary Captain in the British Army and then joined the secret organisation.

The Motor Sport magazine in 1945 revealed that during the war Benoist had been dropped by parachute many times behind German lines and was able to carry out major disruption at Caen on D-Day. He escaped from the occupying forces twice: once, having been caught by the Nazis he was being transported to be interrogated by the Gestapo when he managed to leap from a moving vehicle and make good his escape. He was able to get back to Britain, with the help of the French Resistance, but then duty called again and he took up another mission in France lasting from October 1943 to February 1944. This was followed by a short period back in London before returning to France in March to carry out further SOE work in the Nantes area. This time, however, his luck ran out and Benoist was arrested on 18th June 1944 and shipped to Buchenwald concentration camp. Interrogated by the Gestapo, it was here that he was executed three months later on 9th September 1944. The next year, in August 1945, Motor Sport magazine reported: "Sportsmen all over the world will have read with sadness the news that the Germans did to death Robert Benoist, following his prolonged and heroic work for the Allies during the war." The contrast of the language used with the official casualty list report of "Died Whilst Prisoner of War in German Hands" is profound.

T/Capt R.M.C. Benoist reported as Died Whilst Prisoner of War in German Hands in the WO417 on TheGenealogist - actually he had been executed as an agent by the Nazis.

There had been a third motor racing driver, Jean-Pierre Wimille, who had also joined the SOE like his Bugatti colleagues Grover-Williams and Benoist. Of the three pre-war drivers though, he was the only one to survive the war as a SOE secret agent. But having come through the conflict, fate decided that he would not have a long life to live. His death occurred in a crash in the practice runs of the 1949 Buenos Aires Grand Prix behind the wheel of a racing car, doing what he loved to do: driving a Grand Prix racing car. 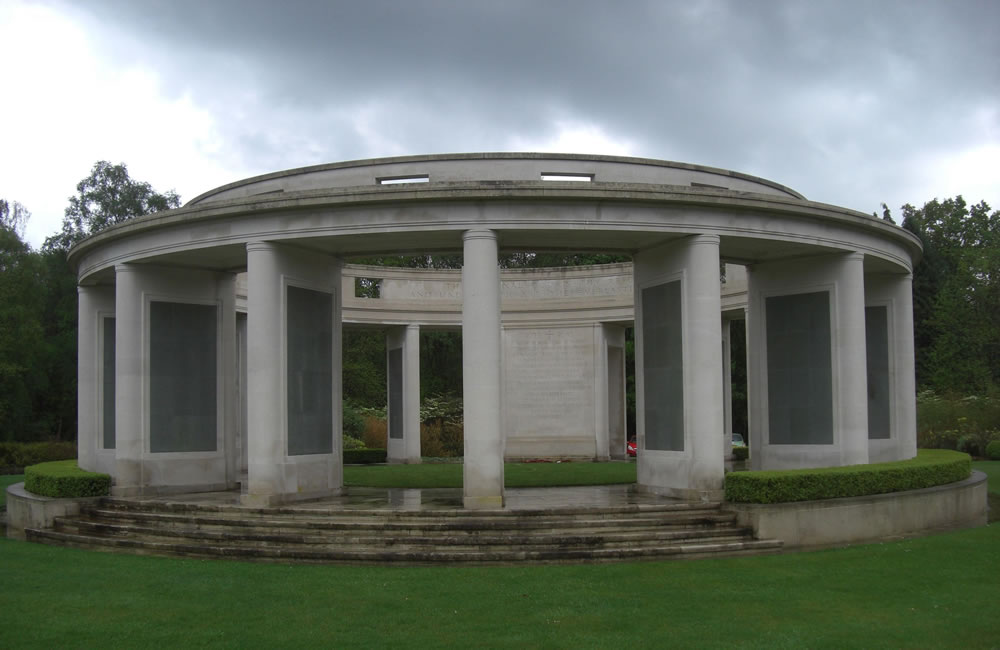 The Brookwood Memorial on TheGenealogist where close ups of the panels reveal both Grover-Williams and Benoist's names recorded for posterity.