Do you really know who you are?

What was the town or village like when your ancestors lived in it? If they were to jump into a time machine and come forward to today would they still be able to navigate their way around their area, or would it be so different that they would be lost?

As the years pass the British landscape has changed as towns developed and spread out into what was once countryside. In towns and cities the scars of the wartime blitz mean that homes have been obliterated. In other places the redevelopment of areas could have seen roads extinguished or renamed – some road names being reused, while others follow a completely different path from what they originally had.

Let's take a look at the Filton area north of Bristol, where the Family History Show is being held on the 8th February (UWE Exhibition and Conference Centre Filton). Any time traveling ancestor is likely to be bemused by the changes. To understand the lie of the land in Victorian times a fascinating set of maps that we can use are those which were drawn up for the Tithe Commissioners between 1837 and the 1850s. This resource was created at a time when the government was intent on abolishing an unpopular tax that provided the Church of England and some lay owners with a percentage from the produce of the land. 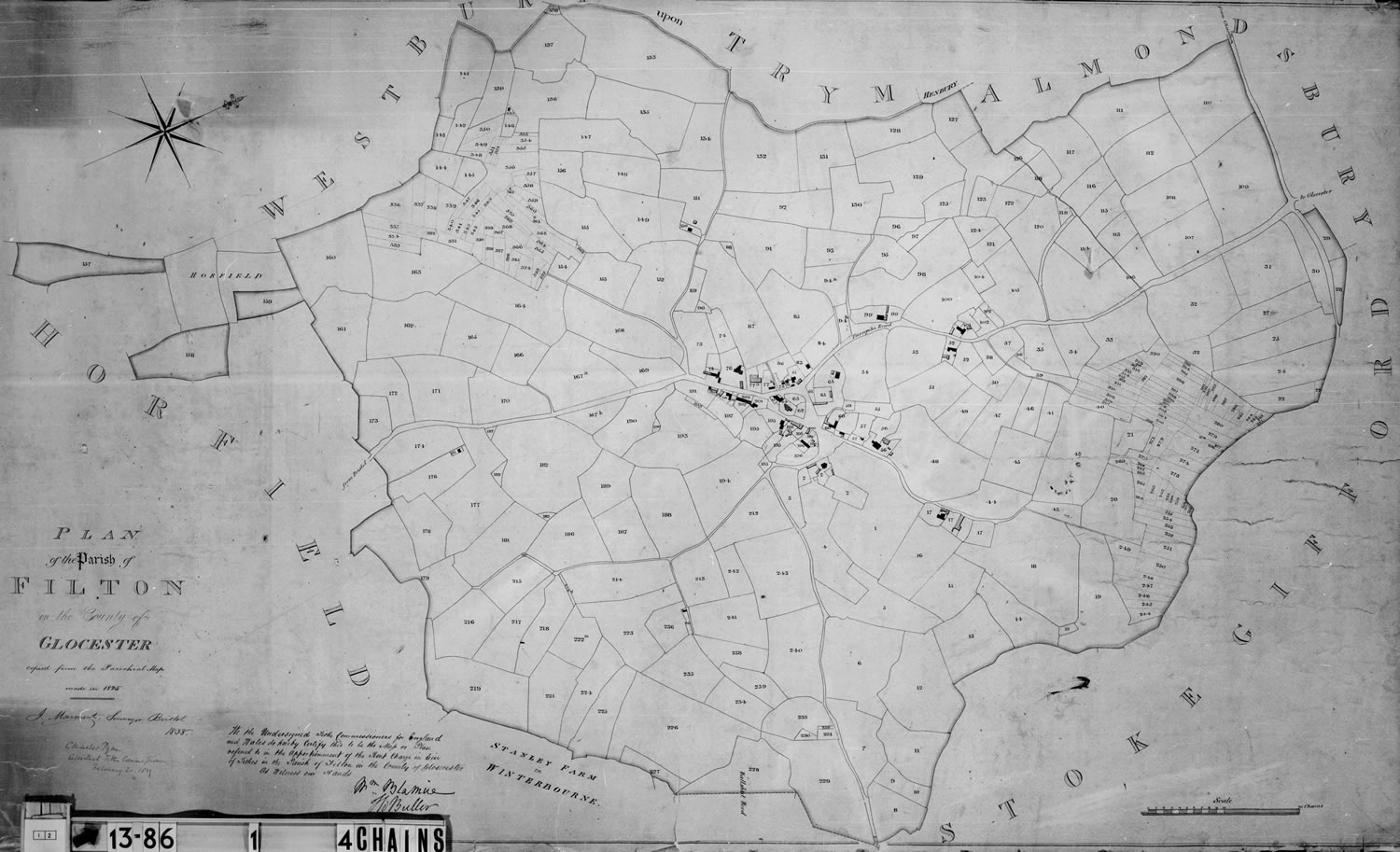 For the family historian's point of view, tithe records allow us to discover details of all types of land usage, as well as all levels of society connected to the plots because, importantly, this survey covered occupiers as well as landowners. Three copies of each map and accompanying apportionment book records were created and the Tithe Commissioners' examples have ended up at The National Archives. These are now available online having been digitised by TheGenealogist, one of the major exhibitors at the forthcoming Family History Show at UWE.

In the case of Filton we can see that it was no more than a small village settlement surrounded by a patchwork of fields on the 7th March 1838 when the survey was done. The bucolic nature of the area is obvious from a glance at the map with only the turnpike road that ran through the village heading north, and to Bristol in the south, as its only transport link. Filton had not yet acquired the railway lines, the major trunk roads and the old airfield as features of the area.

Looking at maps in conjunction with other records can be extremely informative for a family history researcher. At the forthcoming family history show TheGenealogist will be showing its Map Explorer™ that comes into its own when looking at the area where our forebears lived from the late Victorian period to the present date. This online resource overlays a number of georeferenced historical maps onto modern street maps and satellite views. With this resource we are able to see the area where today stands the University of the West of England and note that in the late 1950s-60s this was the location of a number of farms with the creeping urbanisation confined by the railway line to the south and east of Filton leaving this area as countryside still. 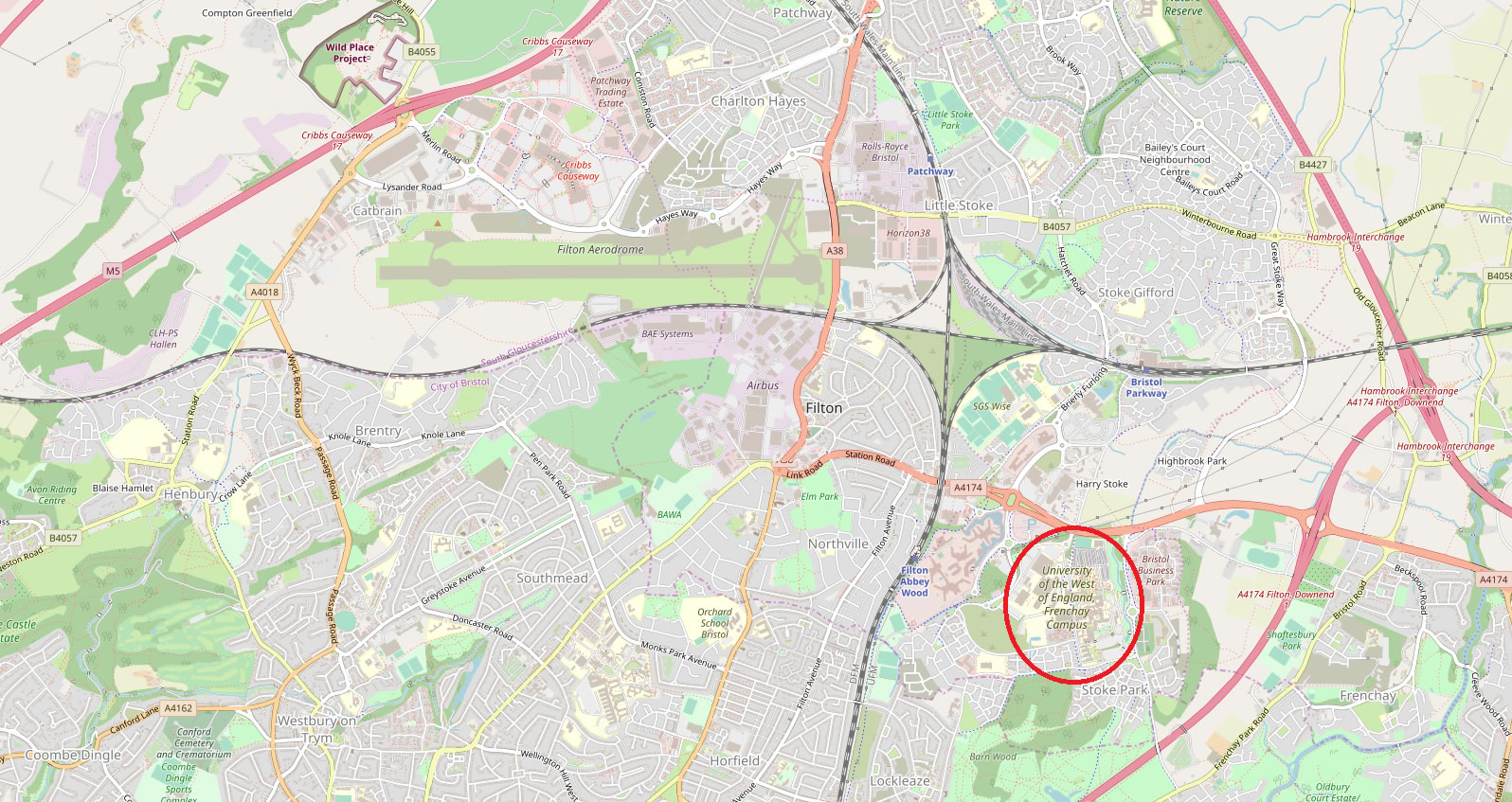 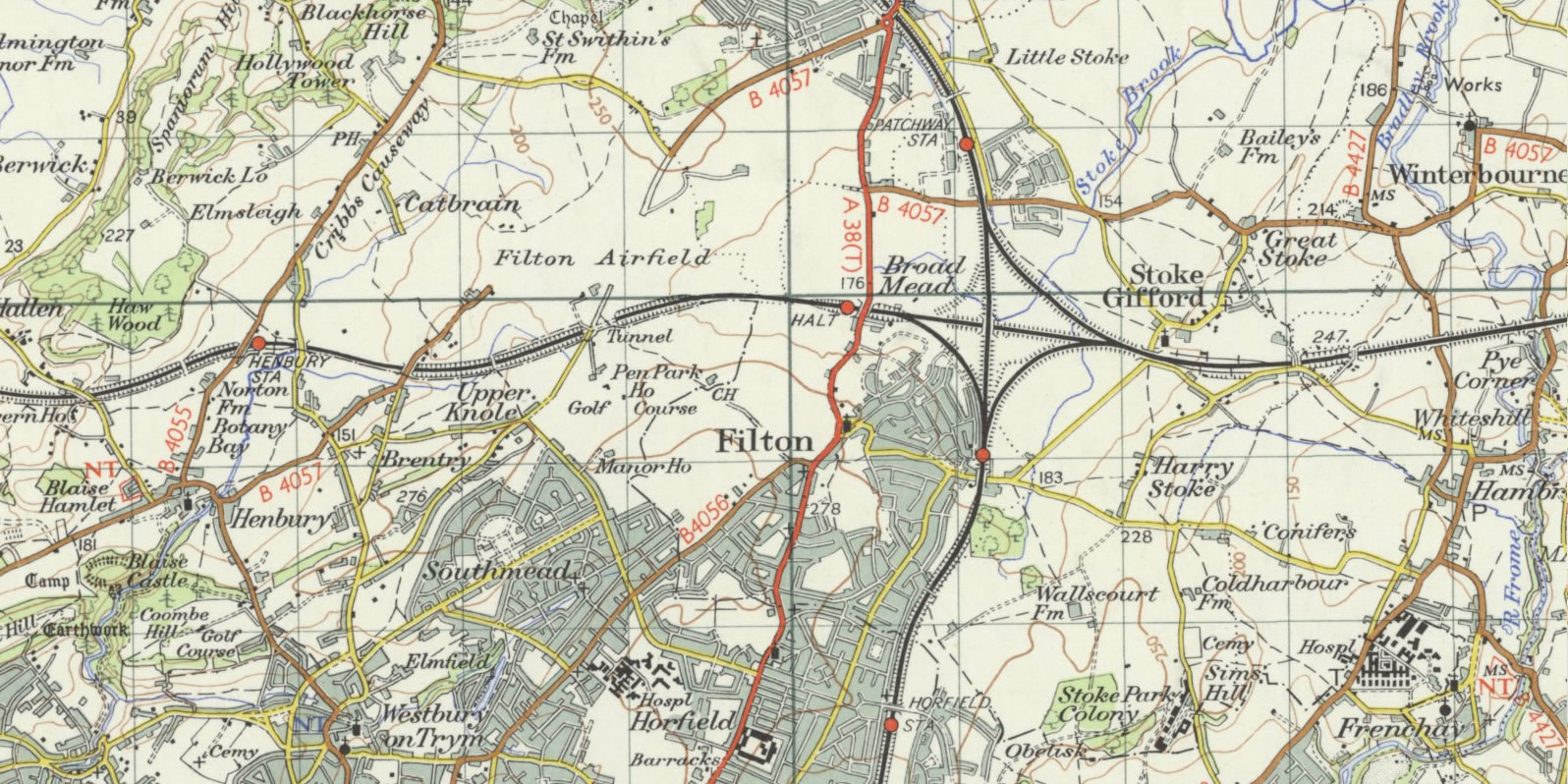 Selecting the 1955-1961 OS map we can now see that in the area to the north west of the expanding Filton is the airfield. The district now associated with Airbus to the south of the railway line, however, seems undeveloped. In this era's map the golf course that is still there today is shown, but not the modern Advanced Technology Centre. Going back further in history by turning to the 1893-1900s map we can see that at this time the area was simply fields. This map was drawn up just before the manufacture of aeroplanes started at Filton in 1910, when Sir George White established the British and Colonial Aeroplane Company in the maintenance sheds of Bristol Tramways. A small 'flying ground' was set up opposite Fairlawn Avenue in 1911, at the top of Filton Hill, where Airbus continues the tradition of aviation today. By fading the opacity slider on the map tool allows us to see exactly how the terrain has changed using the georeferenced maps. 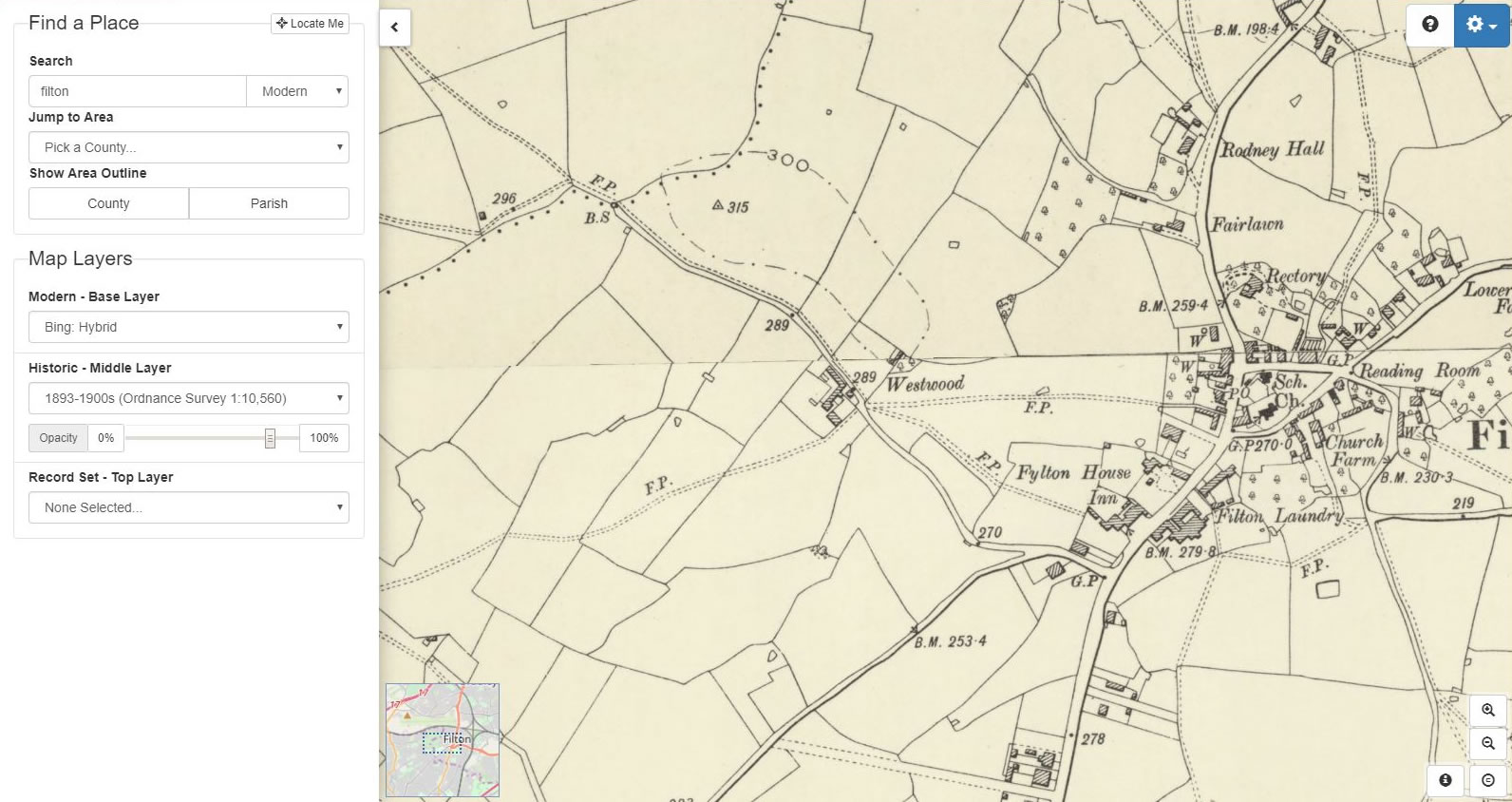 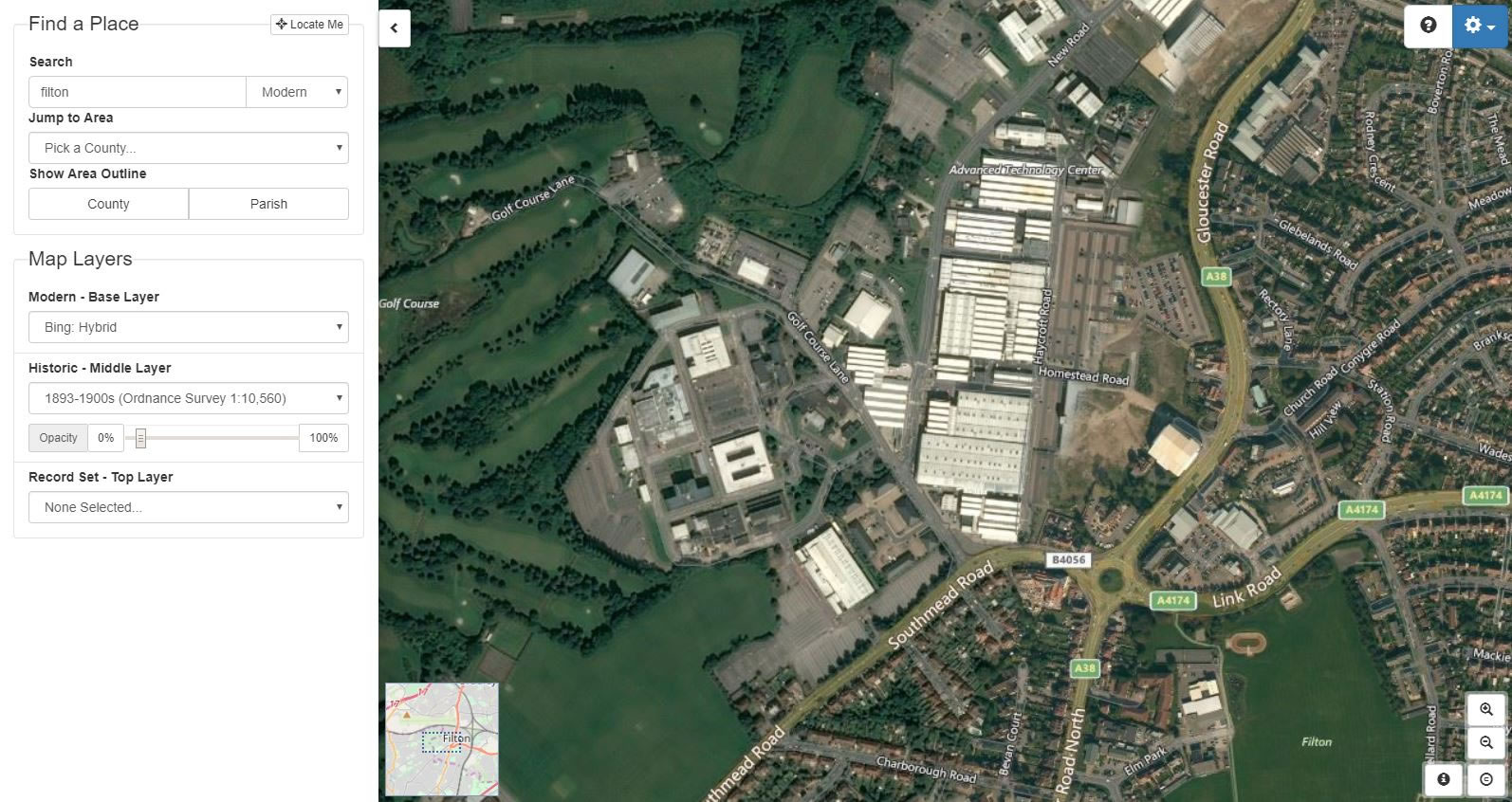 The First World War saw the building of thousands of Bristol Fighters and other aircraft at this site and by 1915 the Aircraft Works had expanded over the original flying area. With this loss The Royal Flying Corps then established Filton Airfield in fields to the north, with access via the hamlet of Charlton that we can see on the old map but which has completely gone from later plans. The settlement was taken over by the War Office, with former residents being re-housed and most of the houses being demolished. During the war, RFC Filton was mainly used as an aircraft acceptance facility. A flying school was also located beside the airfield runway and the entire site eventually became part of the Bristol Aeroplane Company. This then merged into the British Aircraft Corporation and the 1960s and 1970s saw the development and production of Concorde at Filton. Today it is home to Aerospace Bristol, a museum about aerospace and the heritage of aerospace manufacturing in Bristol. 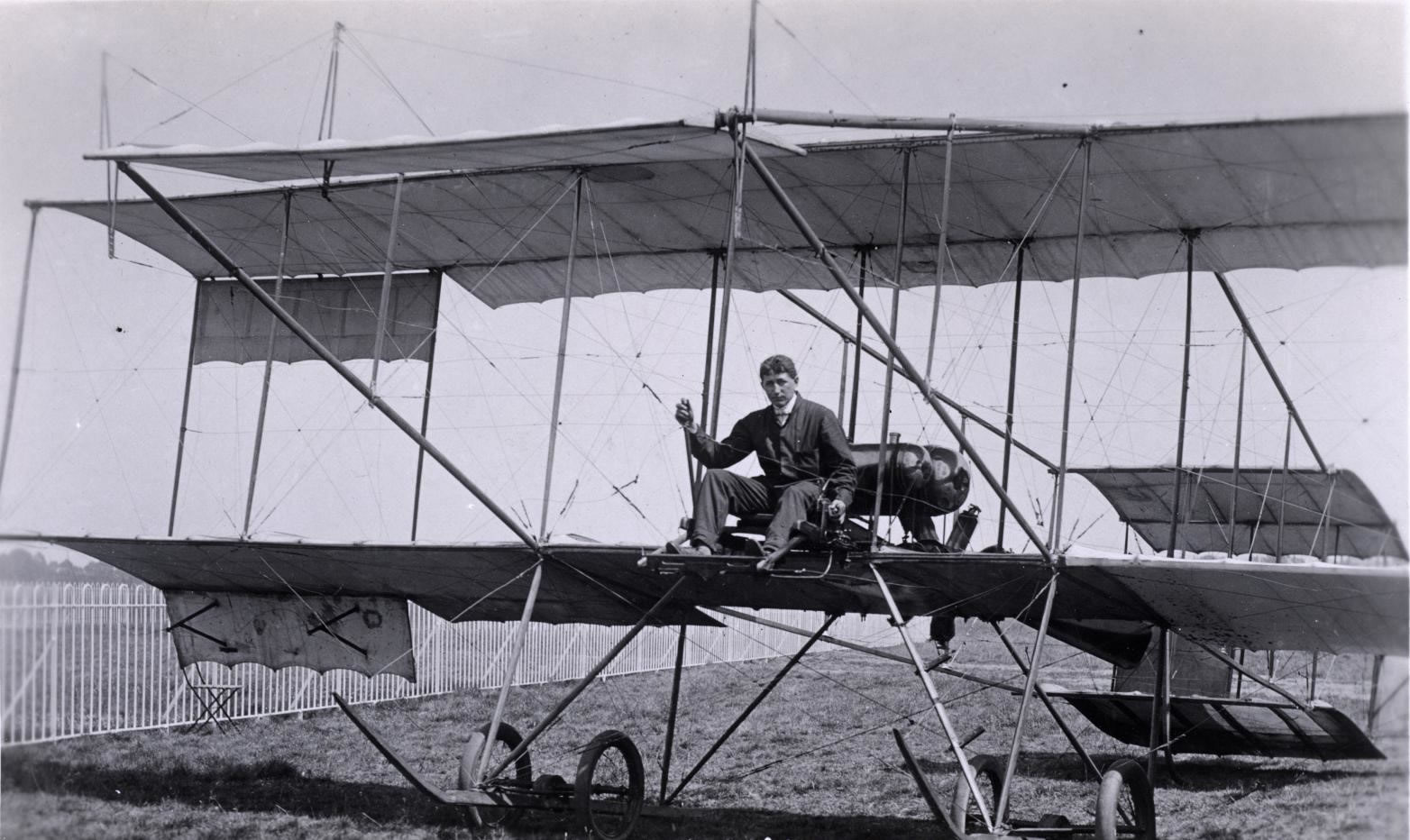 Bristol Biplane Boxkite from the image archive on TheGenealogist

On Saturday 8th February the Family History Show, South West, is returning to the Exhibition centre at UWE where TheGenealogist will be exhibiting at the show alongside various Family History Societies and genealogical supply companies. There will be expert advice and free talks throughout the day including how to break down brick walls, DNA for family history, Military records and much more. A free bus shuttle service will be running from Bristol Parkway and there is plenty of free parking.