The most satisfying result from researching an ancestor's life is where you have managed to discover some of the interesting things or surprising accomplishments that they achieved. While it is important to gather the dates of their birth, marriage and death, together with where they lived and what their occupations had been, a rich family narrative about a person needs to include some additional substance in the form of a record of their acts and deeds.

One way for researchers to add to an ancestor's story is to use resources such as the Educational Records that can be searched on TheGenealogist. This record set contains many registers from schools and universities which, under an old student's name, give potted histories of what they did with their lives after they had received the particular educational establishment's preparation for life on the outside. Family historians can then use the information contained in these entries to research into a person's career, having been given an inkling of where to look for their ancestor and what types of records to look into.

A man of words, a Cricketer and a Sniper? 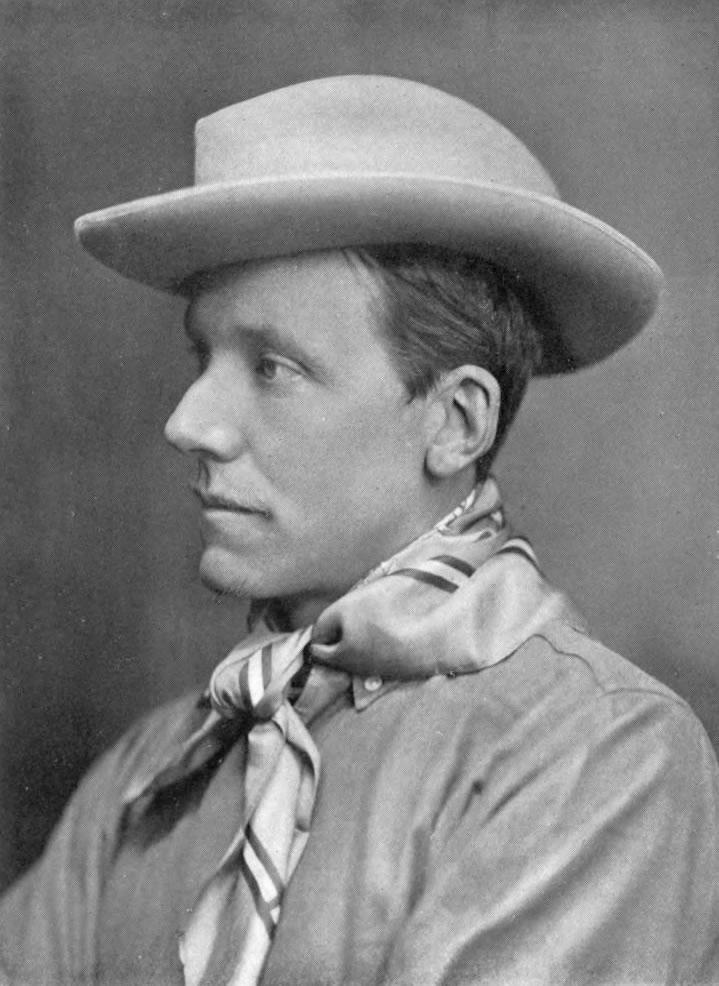 A listing in one of these educational registers can be quite mesmerizing when you stop to consider what was behind the sometimes very succinct entry published. An ancestor's lifetime reduced to just a few sentences in one of these books can, nonetheless, be valuable as it points us on towards several lines of research in which to follow them.

An example that I recently found in The Fettes College Register, the school in Edinburgh that Tony Blair once attended, was for a previous old boy of the school named Hesketh Vernon Hesketh-Prichard. This gentleman is listed as an author and a first-class cricketer playing for Hampshire as well as the M.C.C. These facts alone provide sufficient lines for further enquiry – what did he write? Was he more of a batsman or a bowler? And where else did he tour with the M.C.C.?

To also read, however, that he had done a spell as the A.D.C. to the Lord Lieutenant of Ireland, and been a Major in the First World War points to the need to research deeper into the military records, which can be done on TheGenealogist. The tantalising note that he held a Distinguished Service Order as well as a Military Cross is fodder for more research as is the inclusion, without any explanation, of the words 'First Army School of Sniping'.

Following this last reference up, for example, reveals that he was actually the man behind setting up of this snipers school after he had witnessed what had been happening in the trenches. To begin with, in WW1, only Germany had snipers equipped with rifles with scopes. The lenses allowed their sharpshooters to pick off Allied troops who had raised their heads above the trenches. Realising their disadvantage, it was not long before the British army began to train their own snipers in specialized sniper schools. It was in 1915 that Major Hesketh-Prichard was able to found the First Army School of Sniping, Observation, and Scouting at Linghem in France. For that reason, this mention in the register, was a rather significant achievement in his life story and now that this record has drawn our attention to it we should explore this further.

Researching into Hesketh-Prichard's award of the Military Cross, which we will find also recorded in the Military Records on TheGenealogist, reveals that in October 1916 he gained the award for instructing snipers.

"For conspicuous gallantry and devotion to duty. He has instructed snipers in the trenches on many occasions, and in most dangerous circumstances, with great skill and determination. He has, directly and indirectly, inflicted enormous casualties on the enemy." – The London Gazette 14 November 1916 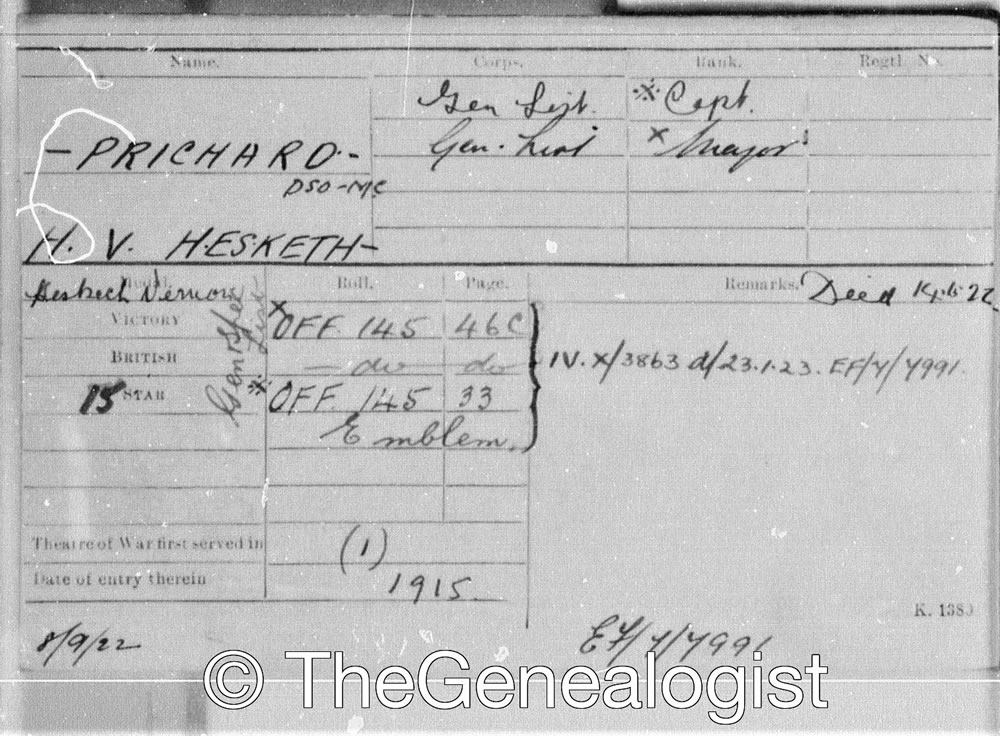 The horror tales of a mother and her son

The intriguing statement in The Fettes College Register that he was the Chairman of the Society of Authors raises the question in our minds as to what did he write? A search for his name and the keyword 'Author' will show us that by the time of the 1911 census he certainly considered that writing was his career. This is the occupation that was recorded for him while he and his wife had been staying with his brother-in-law on census night 1911. 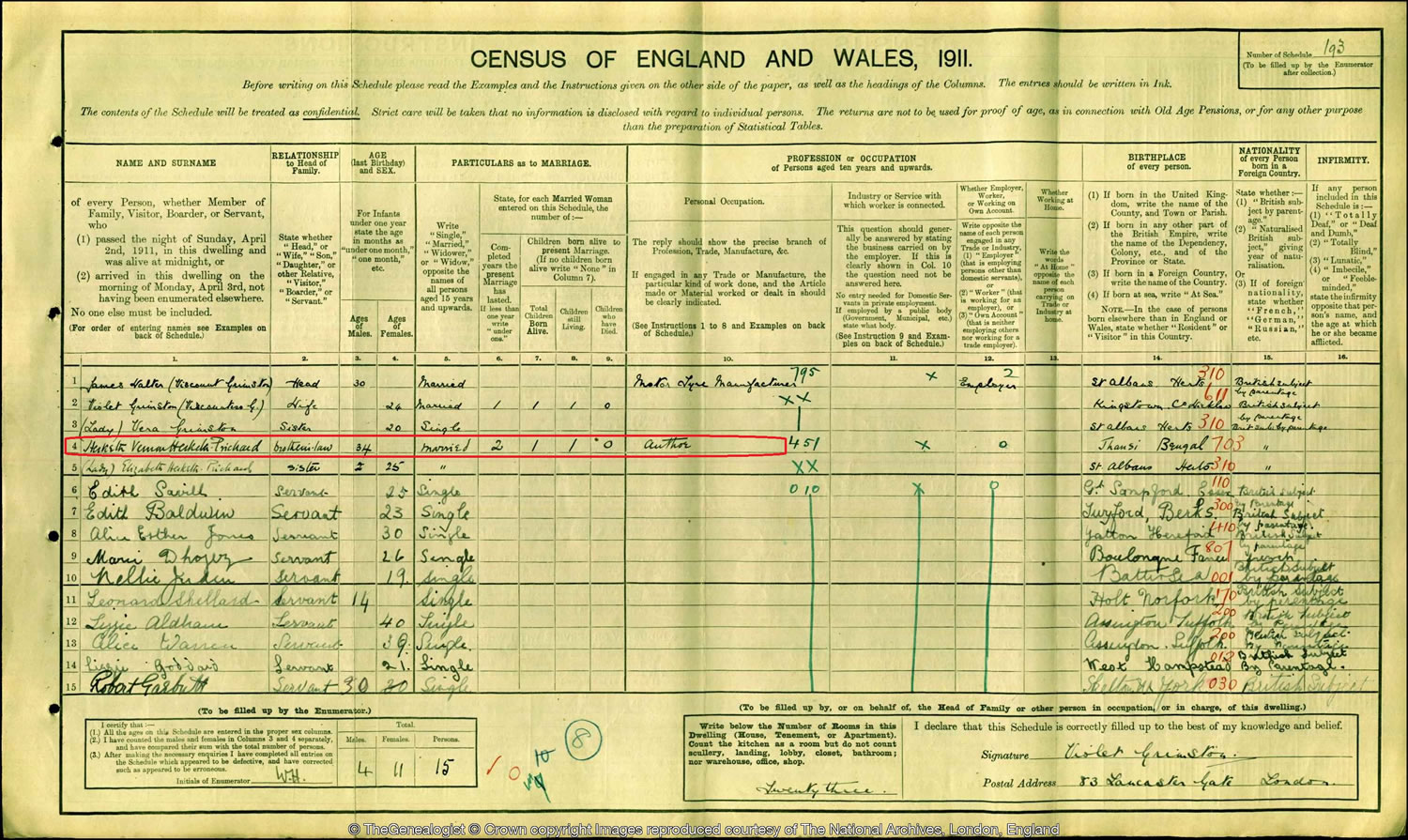 Further research discovers that he wrote a great deal with his mother, Kate. His first story being "Tammer's Duel" which was written in the summer of 1896, two years after we see, from the Educational records, that he had left Fettes College. It was a fictional account of a duel that he set on the island of Jersey, where he and his mother had lived for a short while. Together with his mother, who helped him to refine the story, they were able to sell the piece to the Pall Mall Magazine for a guinea.

After this success he and his mother wrote together under the pseudonyms "H. Heron" and "E. Heron" and they became the authors of many horror stories, the most famous of their collaboration being the Flaxman Low psychic detective ghost stories that were published in Pearson's Magazine. Increasingly moving in literary circles, (J. M. Barrie had introduced him to the Press Baron Sir Cyril Pearson) Hesketh-Prichard gained commissions from Pearson to travel widely, such as the trip in 1899 where Pearson chose Hesketh-Prichard to explore and report on the relatively unknown republic of Haiti. The newspaper man wanted something dramatic with which to launch his forthcoming paper, none other than The Daily Express.

A search of TheGenealogist's passenger list records discovers mother and son on their way to Labrador on one of their many trips, possibly to find yet more interesting content for their articles. Their occupations are given simply as 'Traveller' and they are accompanied by a 'Guide' in this particular instance. 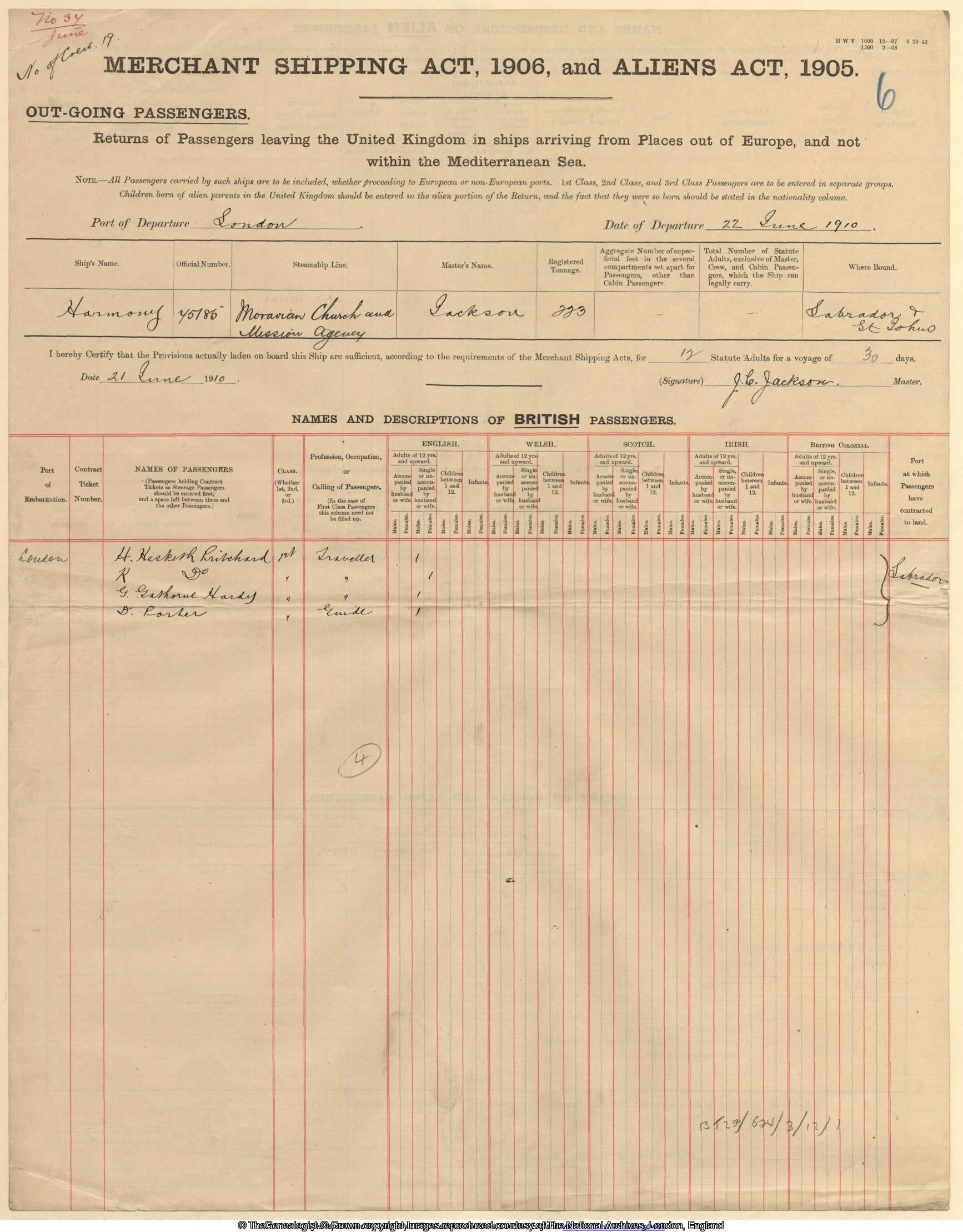 Passenger Lists for out-going travellers can be searched on TheGenealogist

The 1911 census, that we have already reviewed above, also reveals that Hesketh-Prichard's wife was a titled Lady in her own right. By checking the name of the head of the household we note that his brother-in-law was the Viscount Grimston who, rather incongruously is recorded as having an occupation as a Motor Tyre Manufacturer in the 1911 census! He was indeed a businessman, but he and Hesketh-Prichard's wife, Lady Elizabeth, were also the children of the 3rd Earl of Verulam.

With this information we might then proceed to search the Peerage, Gentry & Royalty records on TheGenealogist where an entry in Kelly's Handbook to the Titled, Landed and Official Classes 1918 reveals Lady Elizabeth to be the fourth daughter of the Earl. We can also see that Hesketh is the son of the late Hesketh Brodrick Prichard, of the 25 Kings Own Borderers, and Kate the daughter of Major-General B.W.Ryall. So we could now use these facts to research back another generation in the records.

Kelly's Handbook to the Titled, Landed and Official Classes 1918 on TheGenealogist

A search for the parents of Major Hesketh-Prichard discovers, within TheGenealogist's Newspapers & Magazine records, the announcement of their marriage in Peshawur during February 1876 printed in The Illustrated London News. Thus we are pointed towards India and the British Raj for further research.

Lastly, The Fettes College Register gives us the fact that Hesketh-Prichard died at St Albans in June 1922. We can find his death in the civil death index on TheGenealogist and from this could then order up the death certificate from the GRO to see where it was that he died in this Hertfordshire city. We can, however, easily discover his address in 1914 when he was recorded as living in St Albans at a house at Pré Wood in the St Michael Rural Polling District of St Albans. These Polls & Electoral Rolls records are to be found on TheGenealogist where we see Hesketh-Prichard listed under Occupiers entitled to vote in St Michael's district of St Albans. 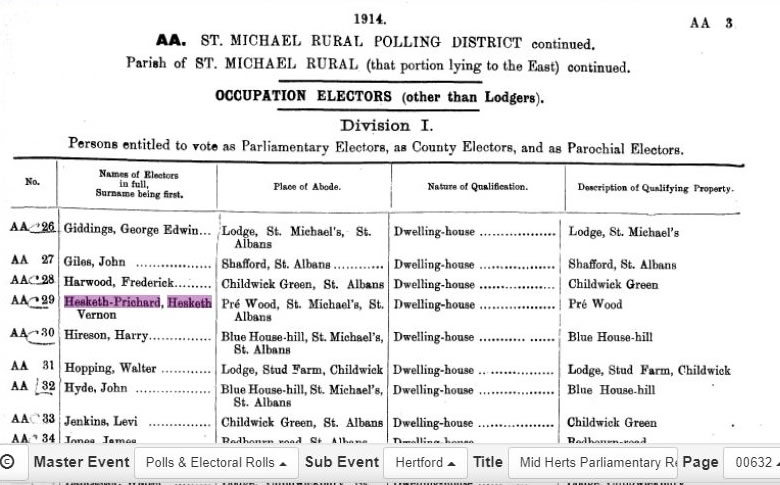 Using the Map Explorer™ to then search for the area allows us to identify St Michael's Rural as being located to the west of the city and by using the 1900s historical map we then discover a Præ Wood plotted on the map.

TheGenealogist's Map Explorer ™ can be used to investigate an ancestor's area

The Educational Record that we have used at the start of this research was able to kick start our investigation into this interesting man. Using the succinct paragraph recorded in The Fettes College Register, this information pointed us towards a variety of rich lines to look into in more detail. The Education Records are a valuable resource to use when searching for your own ancestors’ lives as they lead you on to many avenues of discovery.