Much changed by the blitz, bombs and the building of a historic landmark

One of my favourite attractions to visit is the marvelously restored Cutty Sark at Greenwich. I first went as a young boy in the 1970s and then again several times in the last few years. The most memorable being with my late father who, though 93 at the time, scampered around the deck asking the museum volunteers pertinent questions about the ship like he was a 9 year old! 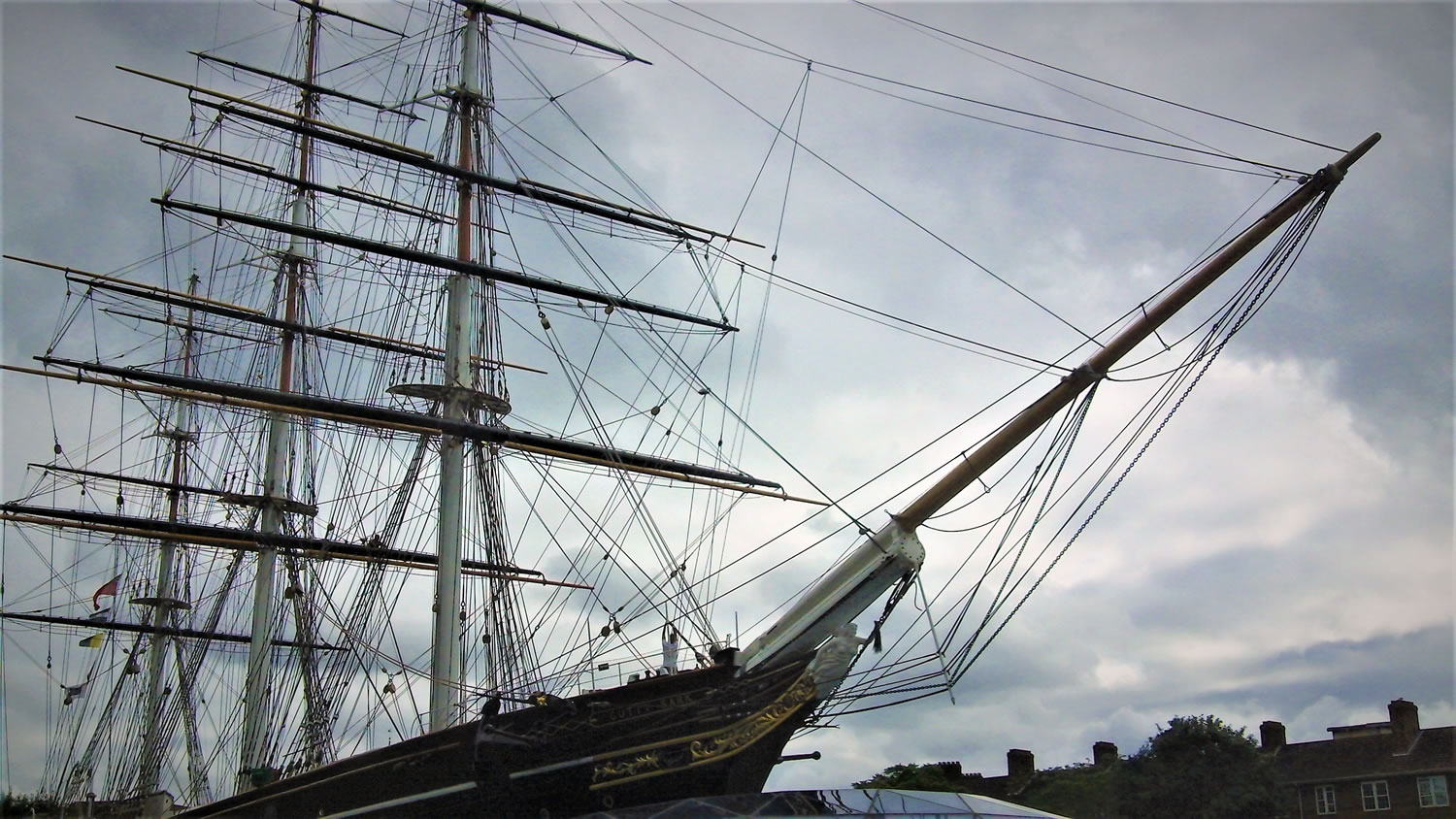 Today the famous tea-cutter is displayed in a drydock created specially for her which, as she is raised up by 3 metres, allows the visitor to not only go onboard but to also walk under the hull. On my last visit as I marveled at both the iconic old ship, as well as the modern museum, I did wonder what this large space had been in years past when this would have been dockside streets running up to the banks of the Thames.

The area, to the west of today's King William Walk, had sat cheek by jowl with the Royal Naval College at Greenwich on London's important commercial waterway. For that reason it is not a surprise to find that the area had been subjected to heavy aerial bombing in the Second World War, thus leading to the destruction of the buildings that had once stood where today the visitor attraction draws countless people in from all over the world. 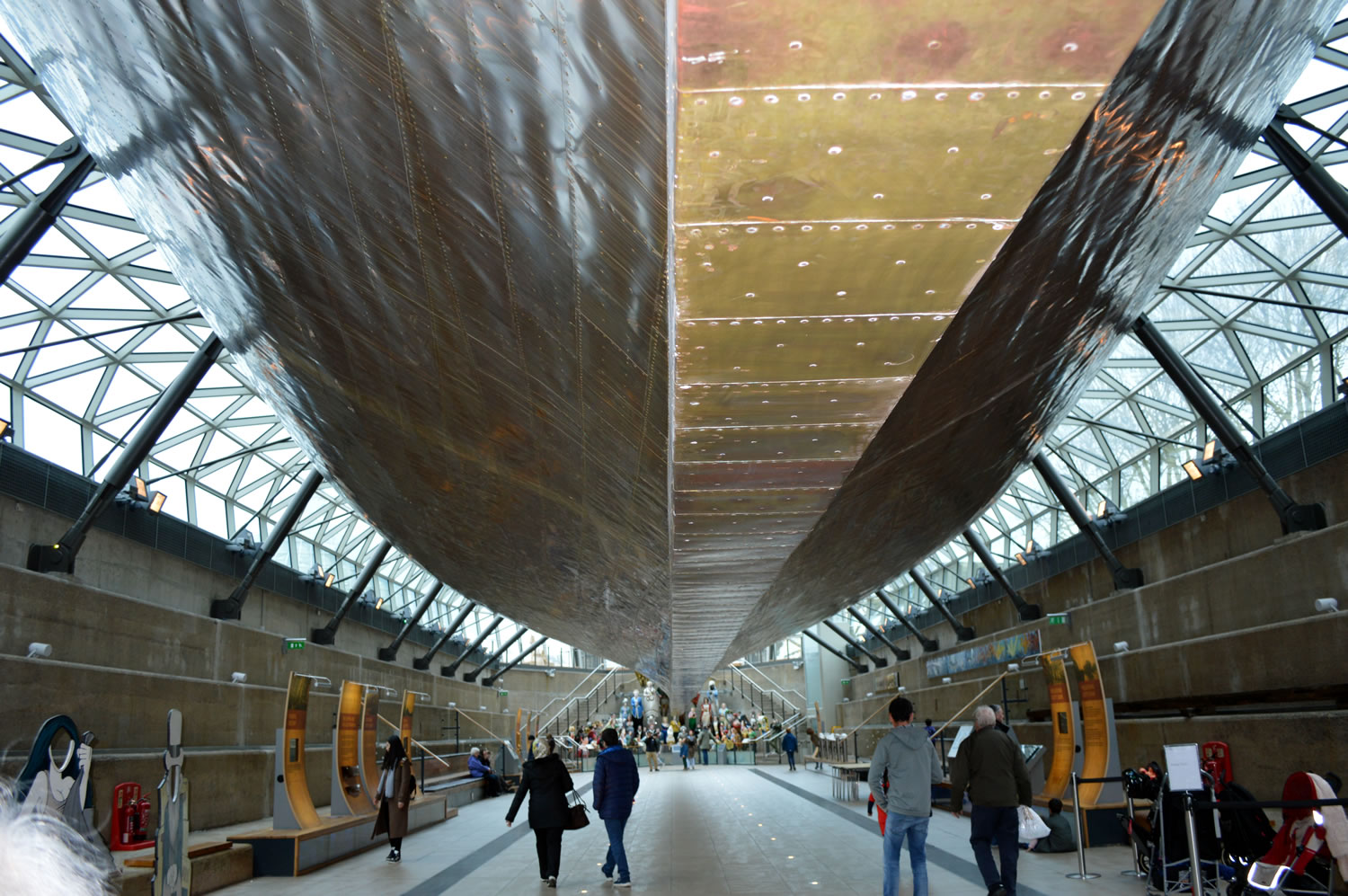 Intrigued by the history of the area I turned to TheGenealogist's Map Explorer™, a powerful tool for exploring an area that has been changed beyond all recognition over the years from the time when our ancestors may have lived there. The ability to view georeferenced historical maps overlaid over a modern base layer gives researchers the ability to fade from what appears mapped on a present day map (or satellite image) and see how the land lay in the past. Changes to the environment can make it hard to find where our forebears lived or worked for a number of reasons ranging from the urban planners redeveloping an area for a new housing estate, office block or shopping mall. Streets may have been renamed or renumbered in the years since. When presented with a clean sheet, after the blitz bombing of a town or city, developers may have constructed new buildings, or indeed a drydock museum attraction as in this case.

Using the Map Explorer™ to see exactly what had occupied this area not only reveals the buildings that once stood there, but also the loss of some of the roads while others had changed names. For example if you have identified an ancestor having lived on the corner of Church Street and Romney Place in Greenwich, neither of these roads exist today where they had once ran. Church Street following the line of the modern Cutty Sark Gardens and Romney Place having been extinguished completely when the sailing ship's drydock was built over it.

TheGenealogist has now released the Lloyd George Domesday Survey records that cover this part of London on the Map Explorer™. This adds a rich extra tool for family historians to use as the georeferenced large scale OS maps pinpoint actual plots where our ancestors lived. Following the link to the actual field books reveals details of the property and so can tell you a lot about a building at the time just before the First World War.

The Ship Hotel or Tavern 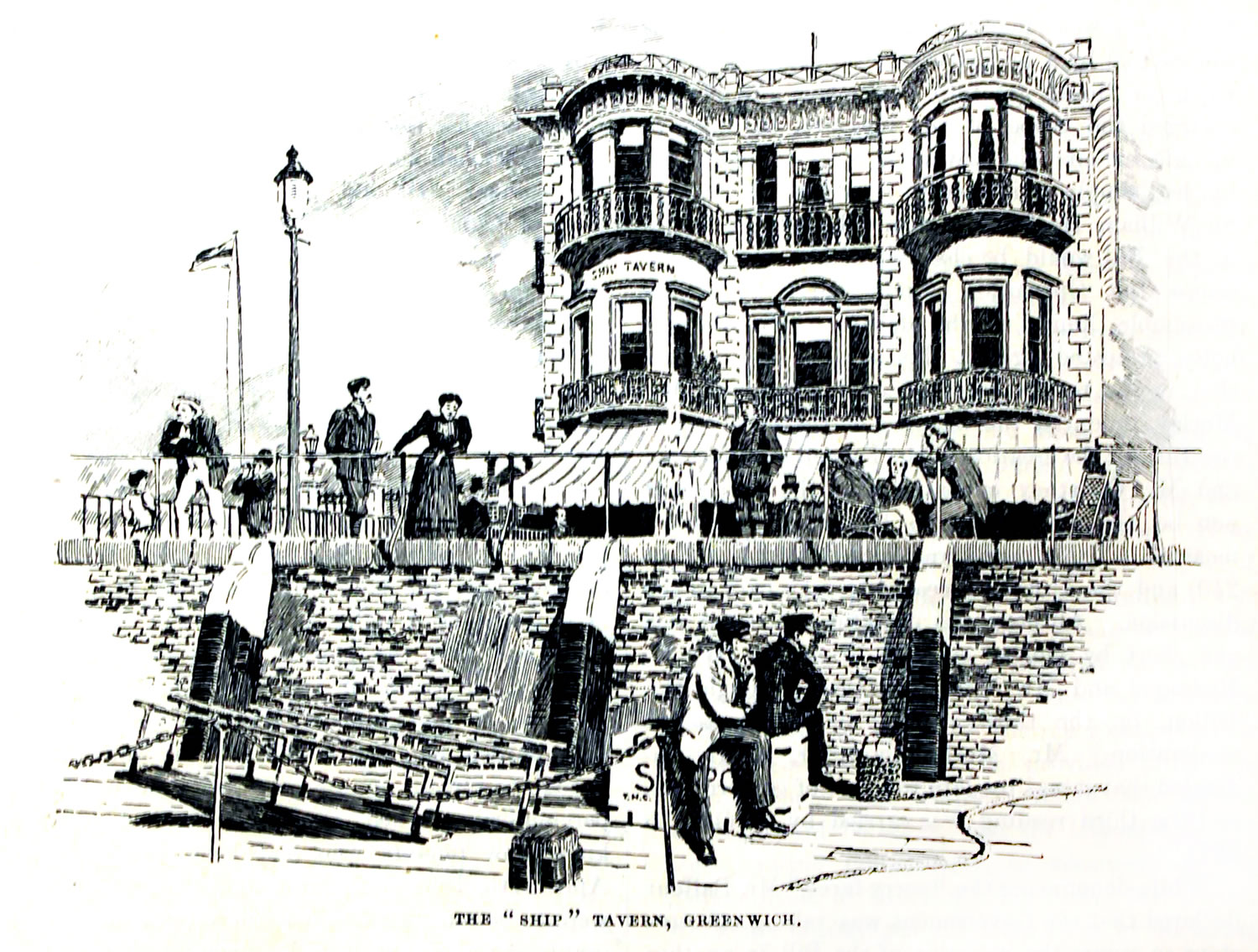 Illustration from Cassell's History of England, pub circa 1905.

Where the bow of the Cutty Sark points towards the river today once stood an inn known as The Ship. By selecting the 1910 Lloyd George Domesday record set as the top layer on the Map Explorer™ we can see that, before the First World War, the area contained many individual plots that indicate separate properties.

The Ship Inn was one of the venues where 'ministerial whitebait dinners' were held to mark the end of each session of Parliament up until 1883, with the other location being the Trafalgar Tavern also at Greenwich. In Victorian times, large paddle steamers took pleasure seekers down the Thames as far as Gravesend, Southend and even Margate. Some, however, would prefer to go only as far as Greenwich for a good day out and so causing a demand for large public houses to be built in the area. On the Thames riverfront, The Ship Tavern evolved into a very large pub to cater for the trippers, though its origins actually go back as far as 1649. The last rebuilding took place about 1880 and on the MapExplorer™ we can use the field book to see the number and types of rooms that the Valuation Office Surveyor recorded on 3 October 1914. What is noted was that the roof was in poor repair at the time indicating that it was already in decline then from its former glory days. While Mr W.J Abbott was the occupier of the building on a 21 year lease from 1908, its owners were the Admiralty who held the freehold to the land on which it stood. 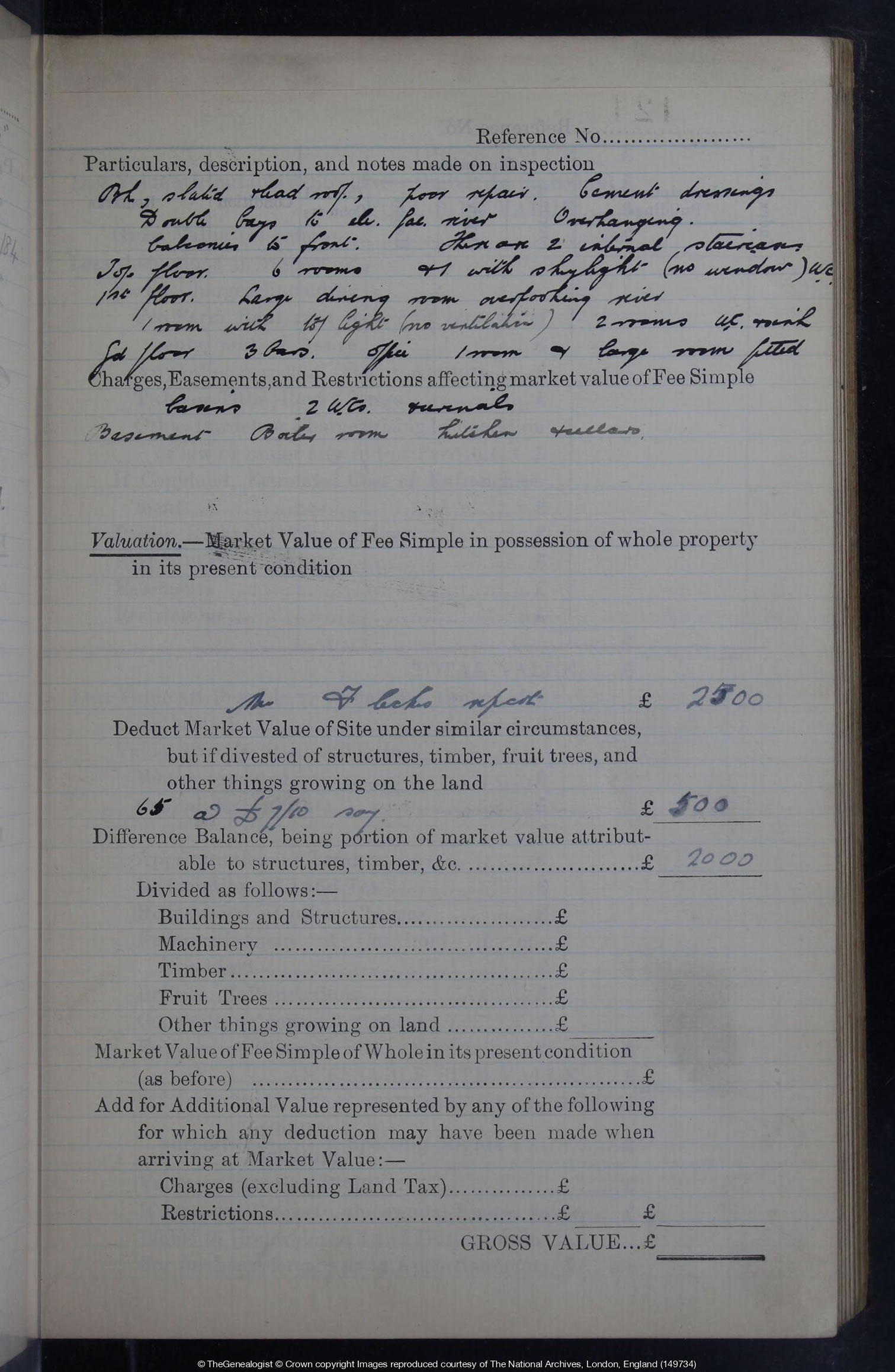 Particulars, description, and notes made on inspection in the field book

Over the years The Ship had seen several landlords including Walter John Abbott who was recorded in these Lloyd George records in 1914, as well as in the 1911 census. Abbott can also be found in the 1920s census substitute on TheGenealogist where he is still the landlord in 1921. An earlier mine host of The Ship can be identified as one Thomas Quartermaine. From a search for him in the Trade, Residential & Telephone directories on TheGenealogist he is listed in 1856 as the landlord of not only The Ship at Greenwich, but also of the York Hotel at Blackfriars as well as the Crown & Sceptre at Greenwich. He was responsible for introducing the Whitebait Dinners to The Ship having already offered them at his other Greenwich establishment.

In 1867 he appeared in the newspapers of the time when one of his employees, Henry Tythe Cheslett, robbed him of a sum of money by collecting an outstanding account from a customer of The Ship, a surgeon of Southwark. The Ship Inn had survived a serious fire in 1887 when the landlord, from a look at the census records, was William J Bale. The fire had taken hold on the Church Street side of the hotel (Cutty Sark Gardens today) in a floor at the top of the building as a result of the kitchen chimney having overheated. A passing boy raised the alarm at twenty-five to eleven at night and the local Greenwich fire brigade were called out. The conflagration meant that assistance was asked for from various nearby stations and the inferno was brought under control by one o'clock in the morning.

Attempted murder of a barmaid at The Ship

On the 28th August 1894, according to another piece reported in several newspapers, James Farrell, a barman from the Rising Sun at Blackwell entered the bar of The Ship Tavern, Greenwich and ordered a pint from the barmaid, Miss Cissie Thompson. Farrell and Thompson had been "walking out together" but he had just received a letter telling him that she no longer wanted to continue their relationship.

Farrell, an ex soldier, then drew a gun and tried to force the weapon between Miss Thompson's teeth saying "I will have you or your life".

She struggled and when he fired the revolver Farrell's shot only slightly grazed her neck. He then ran out of The Ship heading around to her parents' house where he told them what he had just done and informing her mother that he still wanted to kill her daughter.

Apprehended in the afternoon by the police, Farrell was taken into custody and then brought before the Greenwich Police Court. Remanded in custody his case, having been sent for trial, went to the Old Bailey a couple of months later. By searching in the Court and Criminal Records on TheGenealogist we are able to see from the CRIM 9 After Trial Calendar of Prisoners, that he was sentenced to 5 years penal servitude.

The Ship Inn, a venue that would have been well known to many of our ancestors who had passed through Greenwich right up to the Blitz, has left no physical footprint on the area. By using TheGenealogist's Map Explorer™ and in particular the Lloyd George Domesday Survey records, we can still explore the area to see what it was like for our ancestors.

The Ship's foundations now lie beneath a real ship, the Cutty Sark.