The Lloyd George Domesday Survey 1910-1915 records for Southwark, released online uniquely by TheGenealogist, allows those with ancestors from this southern London area to research and find where their ancestors lived at the time. Using this record collection in combination with the 1911 census can allow us to find where houses were even when the roads have disappeared from the modern environment and so are not to be found on current maps. The value of these property records are that buildings are plotted on large scale Ordnance Survey maps that have been georeferenced by TheGenealogist and made viewable as a layer in the versatile Map Explorer™ interface.

To see how this can be useful let us take the family of Oscar winning actor Sir Michael Caine who was born in March 1933 in Rotherhithe, London. As many readers will know, when he was born his name wasn't Michael Caine at all – in fact he had been given at birth the same names as his father, that is: Maurice Joseph Micklewhite. However, when aged 21 and beginning his acting career, like so many other performers he chose a stage name. Michael White, as he first became known, worked his "apprenticeship" in the provincial theatres of Britain until in the mid 1950s, his acting career brought him back home to London. As there was already an actor named Michael White performing in London he was advised to find another stage name. Talking to his agent from a telephone box in Leicester Square and under some pressure to come up with a new sobriquet he immediately looked around him for some inspiration. It was 1954 and the billboard above the entrance to the Odeon Cinema in Leicester Square was promoting, The Caine Mutiny. Being a huge fan of the star, Humphrey Bogart, he decided there and then to adopt the surname Caine. 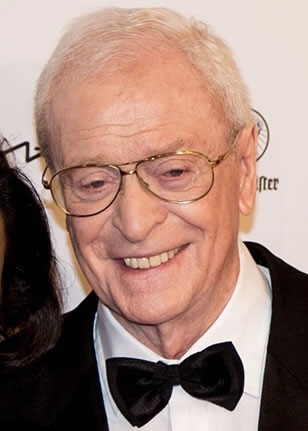 As his name was once Micklewhite this, then, is the family we are searching for in the Southwark area. TheGenealogist's civil registration birth records allows us to find Caine's arrival into the world recorded during the first quarter of 1933 when Maurice Joseph Micklewhite was registered in the St Olave district of London. His mother's maiden surname is recorded as Burchell and so from this result, and by using TheGenealogist's SmartSearch for a Parent's potential marriage, we can identify the actor's parents as Maurice Micklewhite and Ellen F. M. Burchell who wed in the last quarter of 1931.

The birth took place at St Olave's Hospital, a general hospital in the Rotherhithe area of London run at the time by the London County Council. This was before the formation of the NHS to whom it would be transferred and it would continue in use until the hospital was finally closed in 1985. It's buildings have since been demolished to make way for housing so it can't be found on modern maps. St Olave's Hospital had evolved out of the St Olave's Union Infirmary which had been attached to the Workhouse and it is this institution that can be found in the Lloyd George Domesday Survey records at the time before the First World War. Using the Map Explorer™ we can identify exactly where it stood even though the footprint of the old hospital has been lost under the new residential development.

Caine's grandfather was called Joseph, or Joe, Micklewhite. At the time of the 1901 census, when Joe was 26, he was living in the St Peter's parish of Southwark. Married to Hannah Regan he had two sons and a daughter and the record included the two year old Maurice, Caine's father. Joe's occupation was that of a Labourer at the Mineral Water Department in 1901, though earlier in the 1891 census he had been a Brush Drawer.

At the time of the 1911 census and close to the time that the Valuation Office Survey was being taken (also known as the Lloyd George Domesday Survey) Caine's grandparents were living at Number 1 Amicable Row, close to Tabard Street in Southwark, Joe was now enumerated as a labourer on the waterside. This may mean that he was a docker or, as we know that later in life both Joe and his son Maurice are known to be fish porters, it is possible that Michael Caine's grandfather had started to work at the fish market by this time. In the household are Joe and his wife, plus five children including Caine's father, Maurice aged 12. They made a mistake when filling in the form and also listed three more children who were dead by this time. While they are on the schedule they have been crossed through, but this sort of mistake can often be extremely helpful for a researcher. 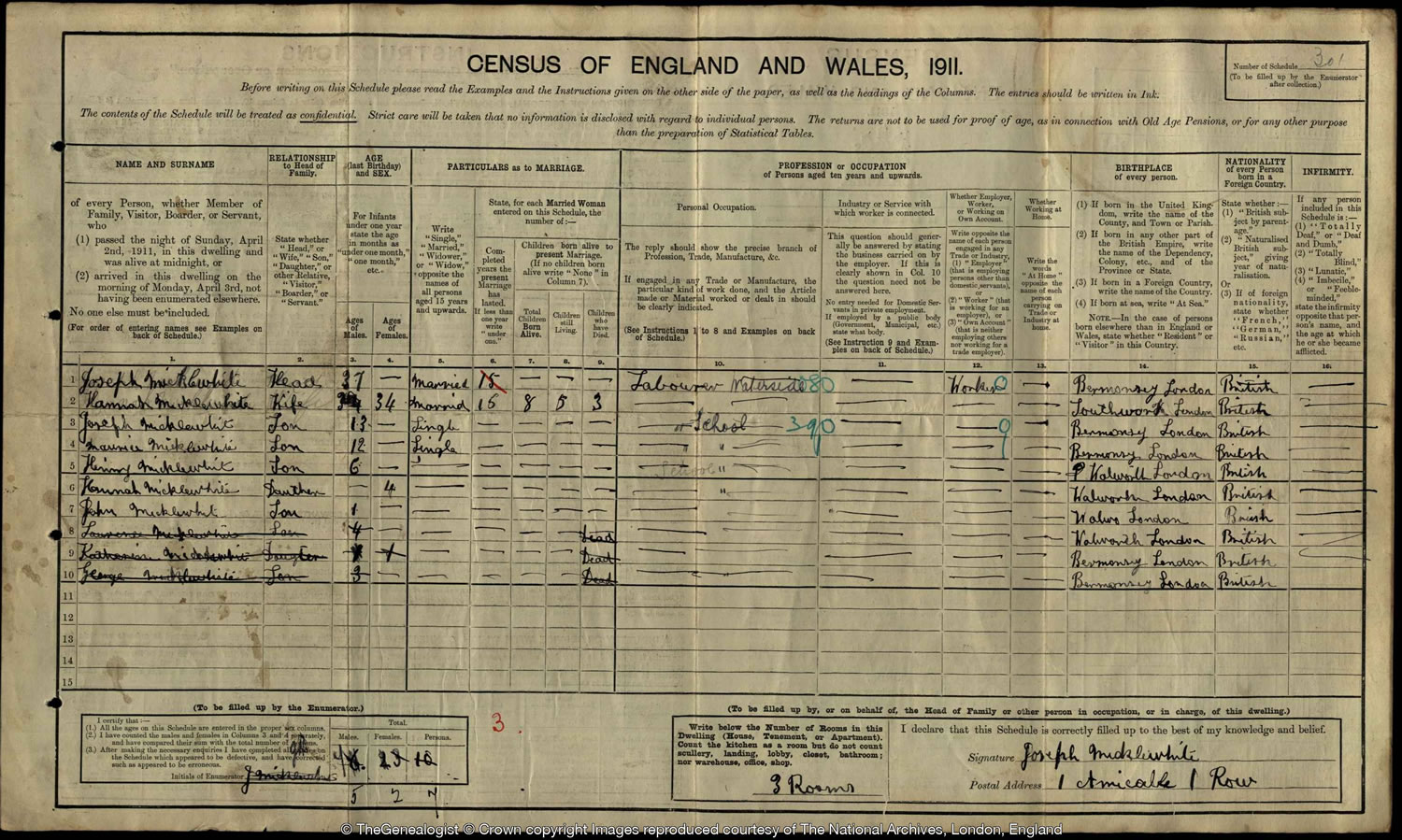 Today it is not possible to just walk down Amicable Row and find the home of the Micklewhites as the area in which it once stood has been extensively damaged by high explosive bombs dropped during the Blitz. The war caused the loss of a whole host of streets that no longer feature on a modern map and this area is typical of many of the country's cities. Searching for Joseph Micklewhite and Southwark in the Lloyd George Domesday records returns us the property at 1 Amicable Row. We can read that Joseph was the occupier while the owners were The Chandos Land & Building Society.

A link takes us to TheGenealogist's Map Explorer™ interface. With this powerful resource we can then fade between the georeferenced maps used by the Lloyd George Domesday overlayed on top of modern maps to allow us to see that the Micklewhite's neighbourhood once stood within what is today an open space called Tabard Gardens. Their house at 1 Amicable Row (see the green map pin) once stood at the intersection of the centre line and touch line of a football field that is laid out there today.

The Lloyd George Domesday records on TheGenealogist allow us to click through to see the pages of the actual field books. In Joseph Micklewhite's case we see that he paid weekly a rent of 7/6 for a house with one large room on the first floor and a ground floor consisting of one room and a yard with a copper and WC. We can only speculate how cramped this must have been for the seven of them that were listed as living at the address in the 1911 census. 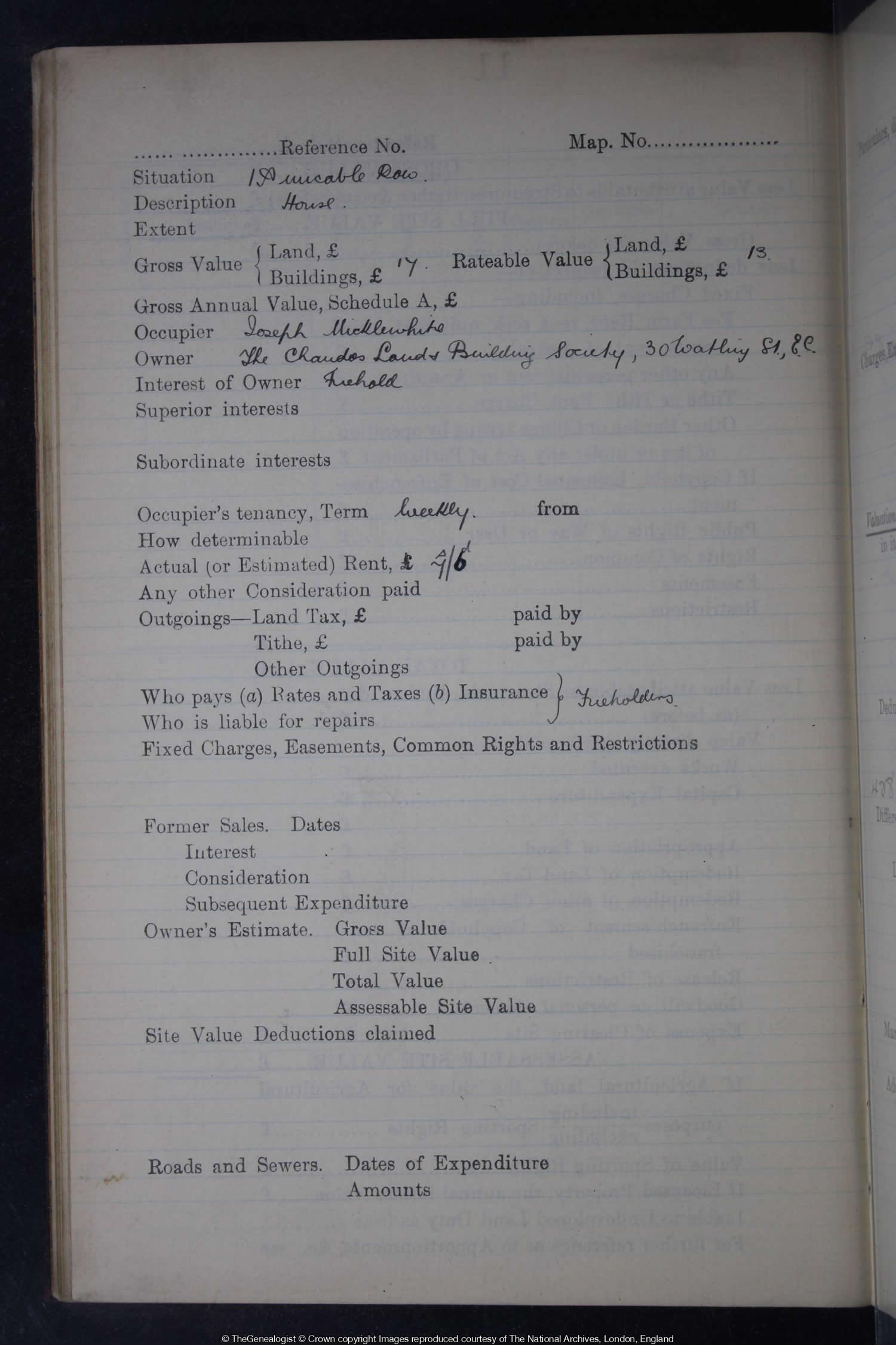 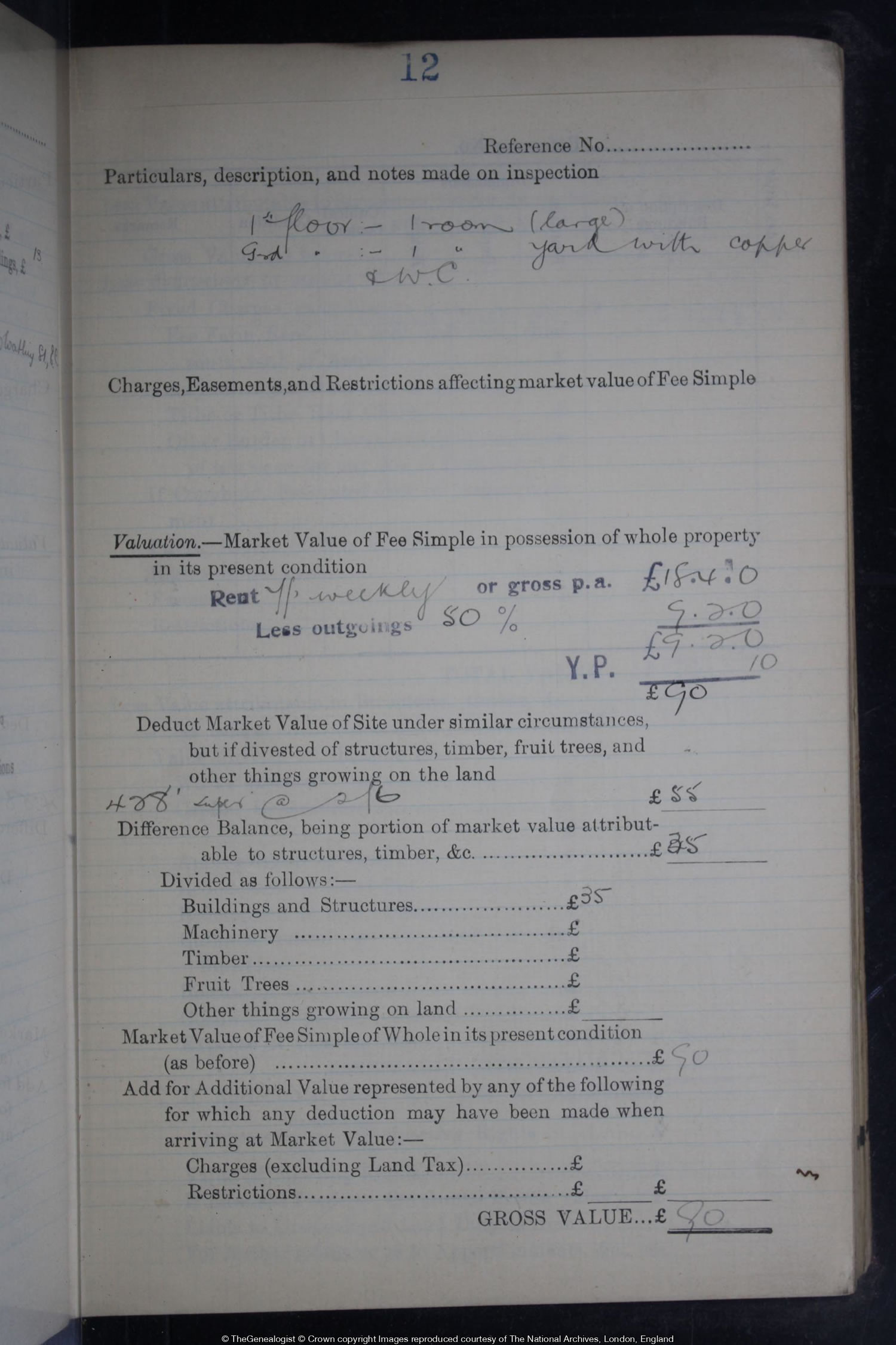 With the powerful features of the georeferenced maps on Map Explorer, the Lloyd George Domesday Survey field books and the Ordnance Survey large scale maps that they linked to, together with the information that we can glean in the census records, it is possible to find exactly where a family lived even when that street or area has been completely obliterated by subsequent redevelopment. Who would have thought that on the touchline of Tabard football pitch once stood the house where the family of Sir Michael Caine lived?