In February 2022 Elizabeth II became the longest reigning British monarch with 70 years devoted to her country. The summer of 2022 sees Britain and the Commonwealth mark the Platinum Jubilee of Queen Elizabeth II with particular festivities held from 2nd to the 5th June over a four day public holiday. Whether you are a Royalist or not, it is quite a remarkable thing that we are marking. That a person would still be standing by a promise made 70 years ago when, in her twenties, the Queen pledged that for her whole life "whether it be long or short" she would devote it to service of the country. Over the June Bank holiday we can expect to see a number of events to mark this historic feat such as the Trooping of the Colour and the lighting of the Platinum Jubilee Beacons that will take place across the land and Commonwealth on Thursday 2 June. 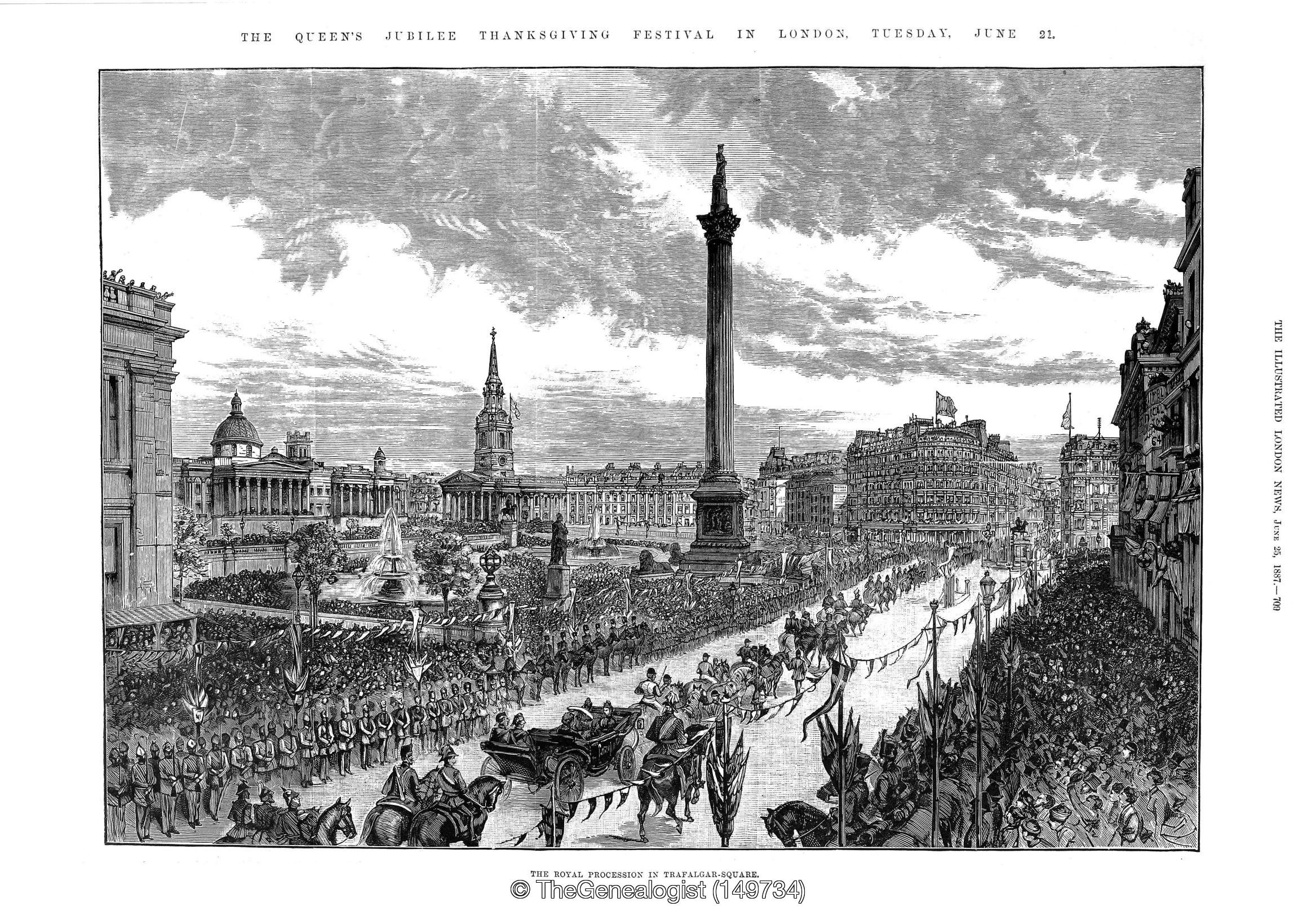 Friday the 3rd June sees St Paul's Cathedral hold a National Service of Thanksgiving that will also witness the ringing of Great Paul, the biggest church bell in the country. Meanwhile, Saturday 4 June will see the Derby at Epsom Downs Racecourse take place and a televised entertainment extravaganza of the BBC's Platinum Party at the Palace. Rounding up the long weekend on Sunday the 5th there is the Big Jubilee Lunch and street parties, plus a procession in central London involving 10,000 people and the Gold State Coach in the Platinum Jubilee Pageant.

We may wonder, knowing this country's love of tradition, how this modern celebration compares with celebrations held in the time of the second longest reigning monarch, Queen Victoria? Victoria was on the throne for 63 years and in that time Britain was at the head of a sprawling overseas empire.

With our extensive range of Newspapers and Magazines Collections and not forgetting The Illustrated London News available to search on TheGenealogist, we have been looking at what similarities exist between events the country held at that time when compared to this year's celebrations. In addition we have dipped into books such as The Queen's Reign and Her Majesty's Gracious Life and Glorious Reign that make up part of our Peerage, Gentry & Royalty records in order to reveal how the important Royal Celebrations of Victorian times have many echos in some of the events that we shall witness this year.

Only a passing mention of the parade

The Trooping of the Colour, today associated with the Queen's Official Birthday, was held in May of 1887 – Queen Victoria's actual birthday. Although the first Trooping of the Colour took place on Horse Guards Parade on 4 June 1805, it was only from the reign of King Edward VII, Queen Victoria's son, that it was moved to its June date. This change was because of the vagaries of the British weather and King Edward VII's actual birthday being in November when it is assumed it would be inclement. Normally held nowadays on the second Saturday in June, the Trooping of the Colour has been brought forward this year from its usual date to take place on Thursday 2 June 2022.

In May 1887 the ceremony was not even part of Victoria's Jubilee, which would be held in late June of that year and the parade at Horse Guards was not given the prominence that it is to have in the current celebrations. In 1887 the Illustrated London News (ILN) reported that the Trooping of the Colour had taken place on Tuesday 24th May, the Queen's birthday when the Foot Guards Regiments and a troop of the 2nd Life-Guards were watched by the Princess of Wales and her Daughters from a window along with the Duchess of Teck. Interestingly no mention was given as to which Royal took the all important salute on that day, nor even if the Queen had attended. This would seem to indicate that it was not as prominent an occasion in the Royal calendar that year in comparison with the 2022 Platinum Jubilee of Elizabeth II. However, we can find in the Newspapers & Magazines on TheGenealogist a number of images of Jubilee parades in 1887 that encompassed ranks of uniformed soldiers being passed by the Queen in an open carriage pulled by six horses with postillions guiding them. The images include that of Trafalgar Square, Regent Street, Waterloo Place and the Victoria Embankment. 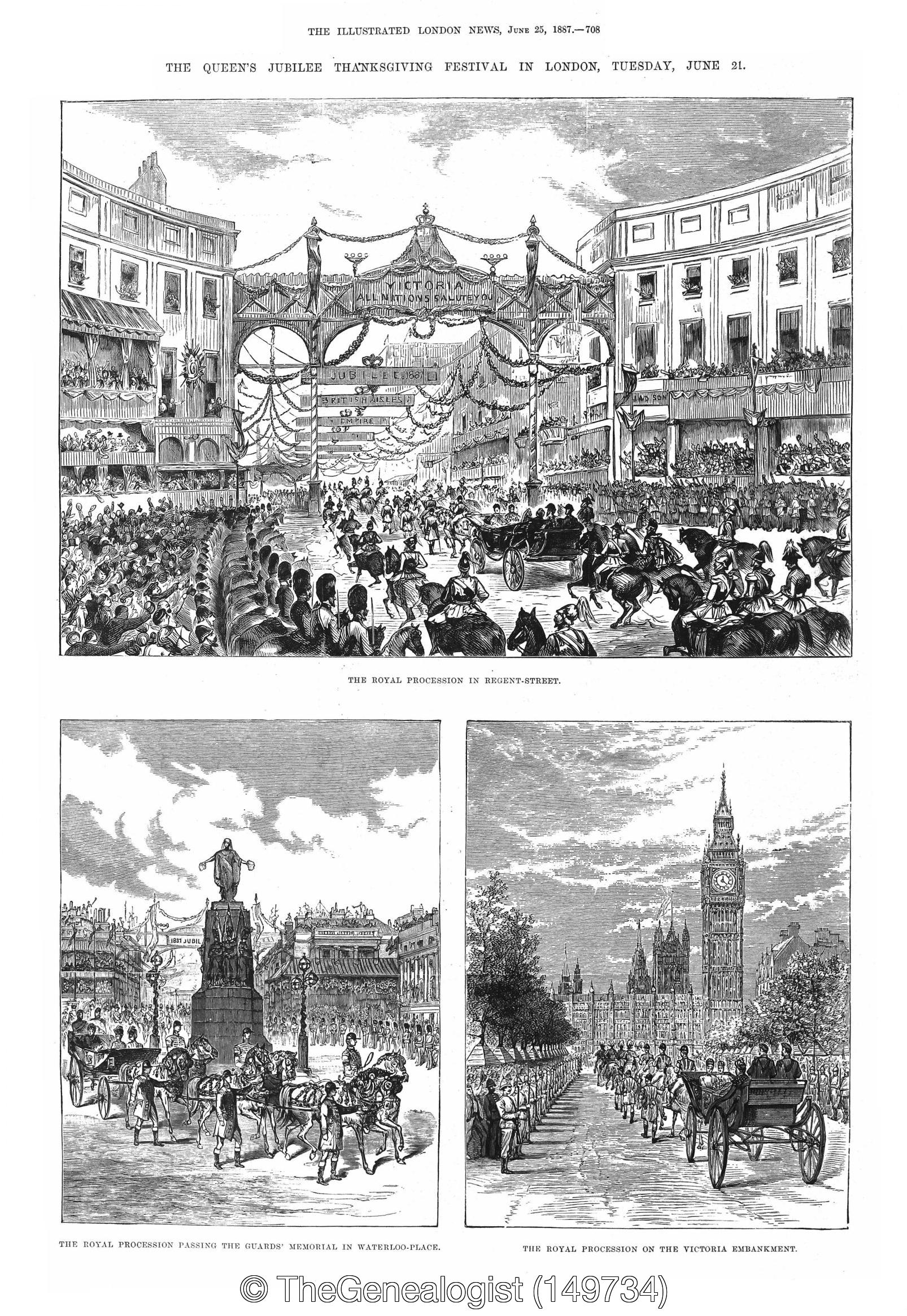 Ten years on from Victoria's Golden Jubilee in 1887, and as reported in the book The Queen's Reign which makes up a part of TheGenealogist's Peerage, Gentry & Royalty records, we are able to see black and white photographs of the parade at the Diamond Jubilee in 1897. 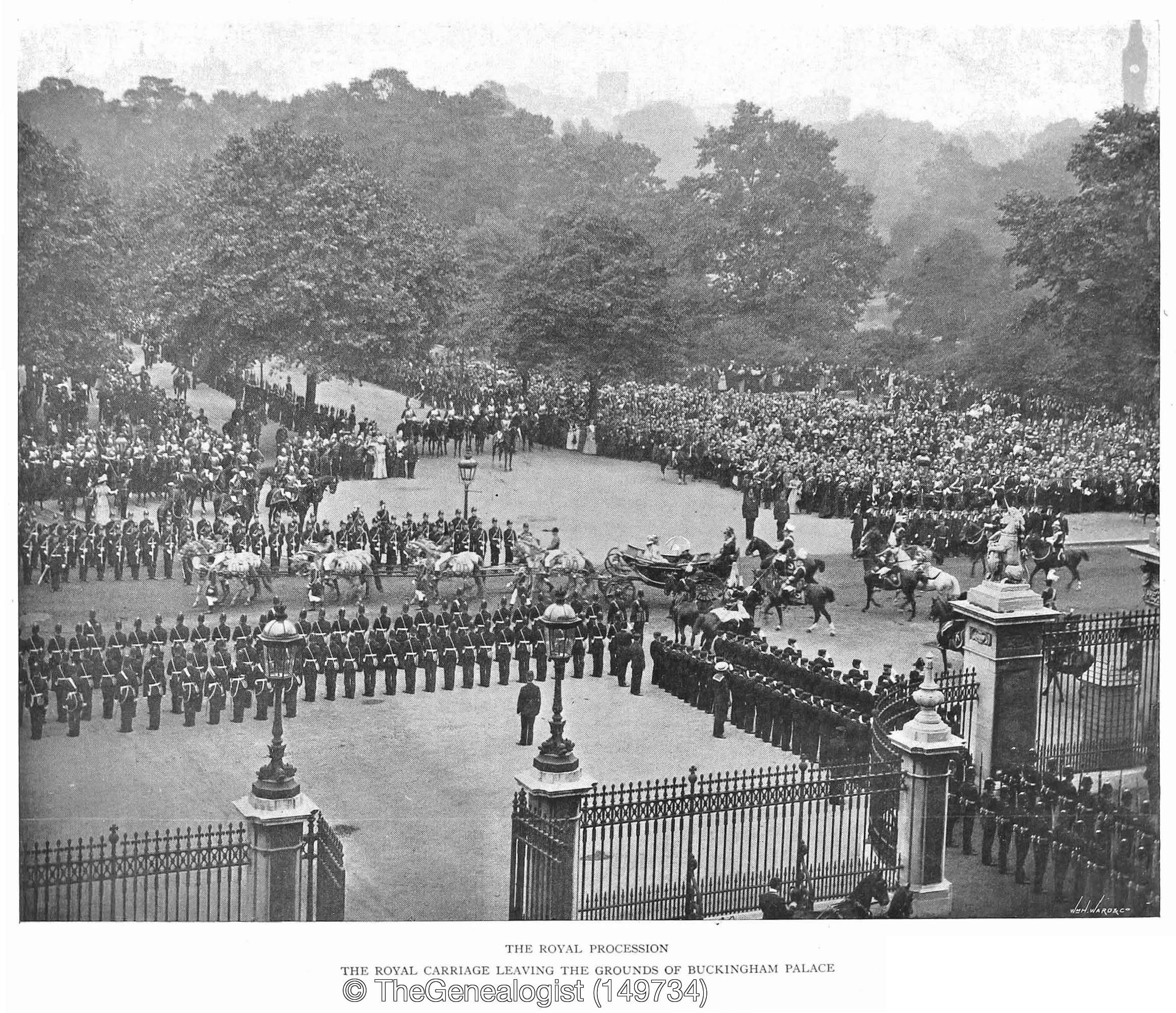 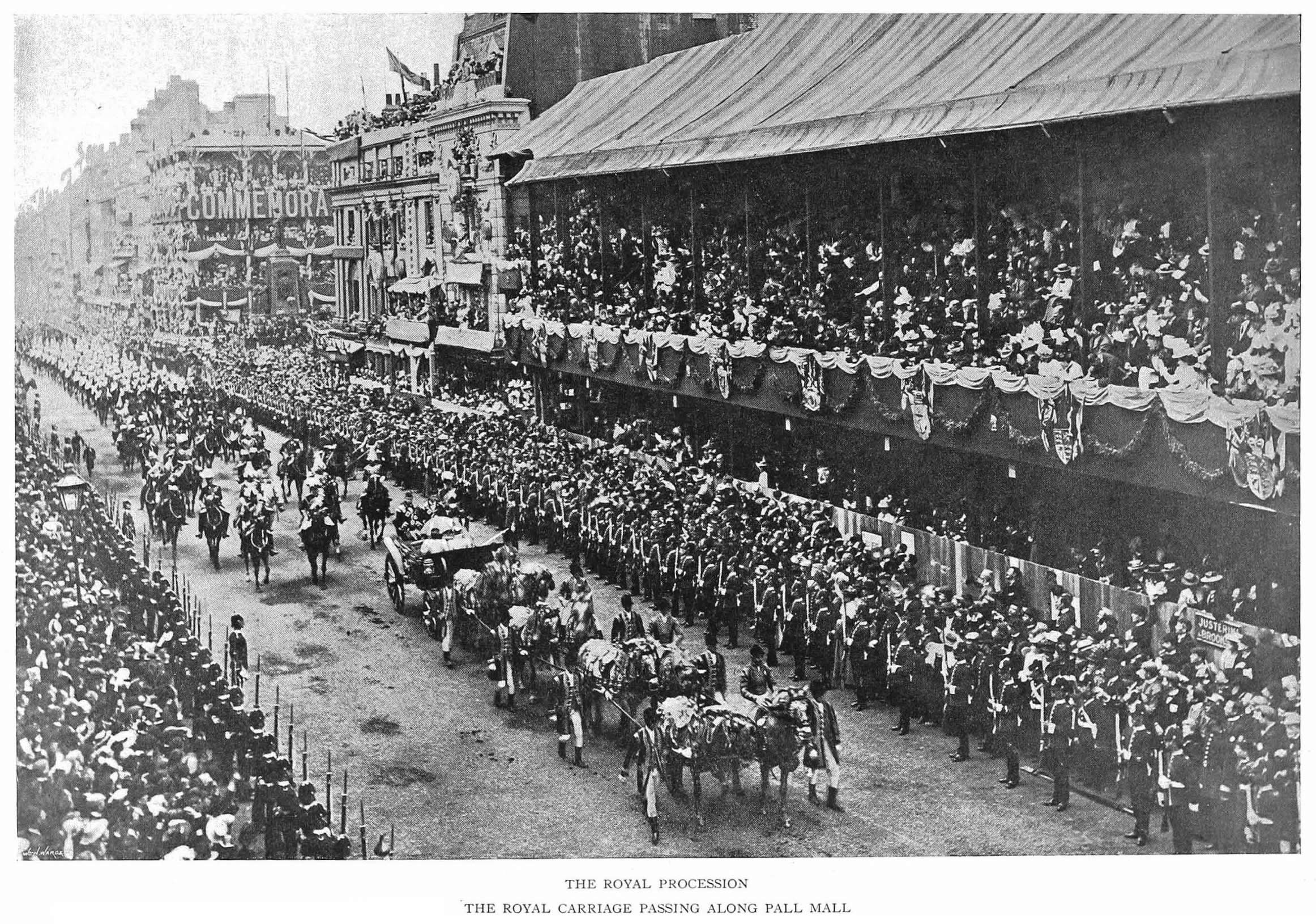 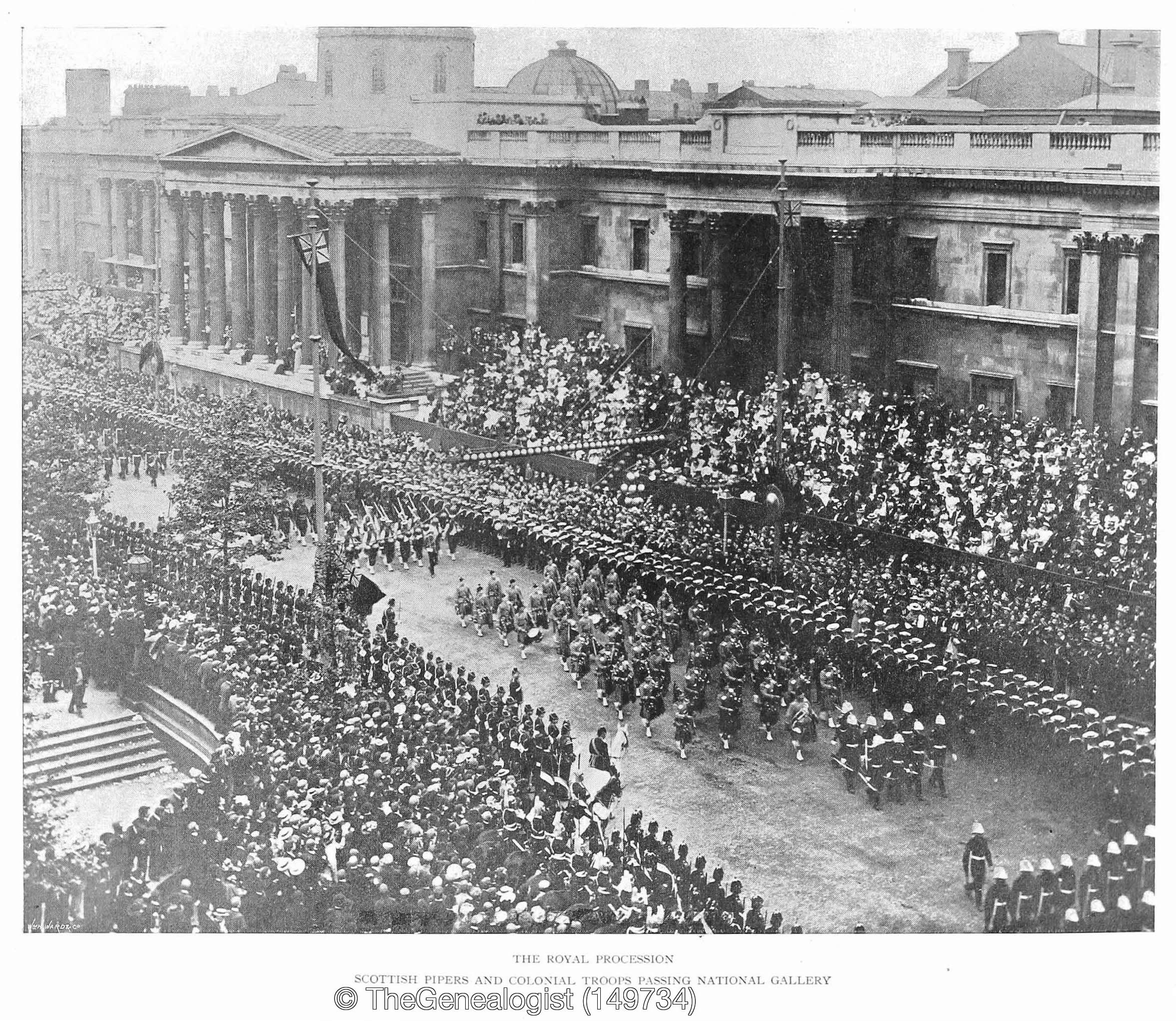 Flames across the land

In the 2022 celebrations we can expect to see thousands of beacons being lit across the United Kingdom, Channel Islands, Isle of Man and UK Overseas Territories as well as beacons lit in all 54 Commonwealth capital cities. It is interesting to see that our Victorian forebears were equally attracted to setting fire to stuff as a signal to celebrate their monarch's Golden Jubilee.

In 1887 the newspapers reported on the massive beacon on the highest summit of the Malvern hills. The Illustrated London News reported that the beacon had attracted an immense concourse of spectators. In June 1887 the Malvern Jubilee Beacon was the principal beacon that would set off the signal for all the others to be lit across the land. This year's modern equivalent event will be different in that the Queen's Jubilee Beacons website asks that the beacons are all lit at 9:45 pm. There will still be, however, The Principal beacon, involving The Tree of Trees (a 21m high 'tree' constructed of 350 smaller trees), which will be lit in a special ceremony at Buckingham Palace at 9pm. Unlike our Victorian ancestors, however, we do not need to peer into the horizon to see if our neighbouring town or village has received the signal yet and then to pass it on by lighting ours. 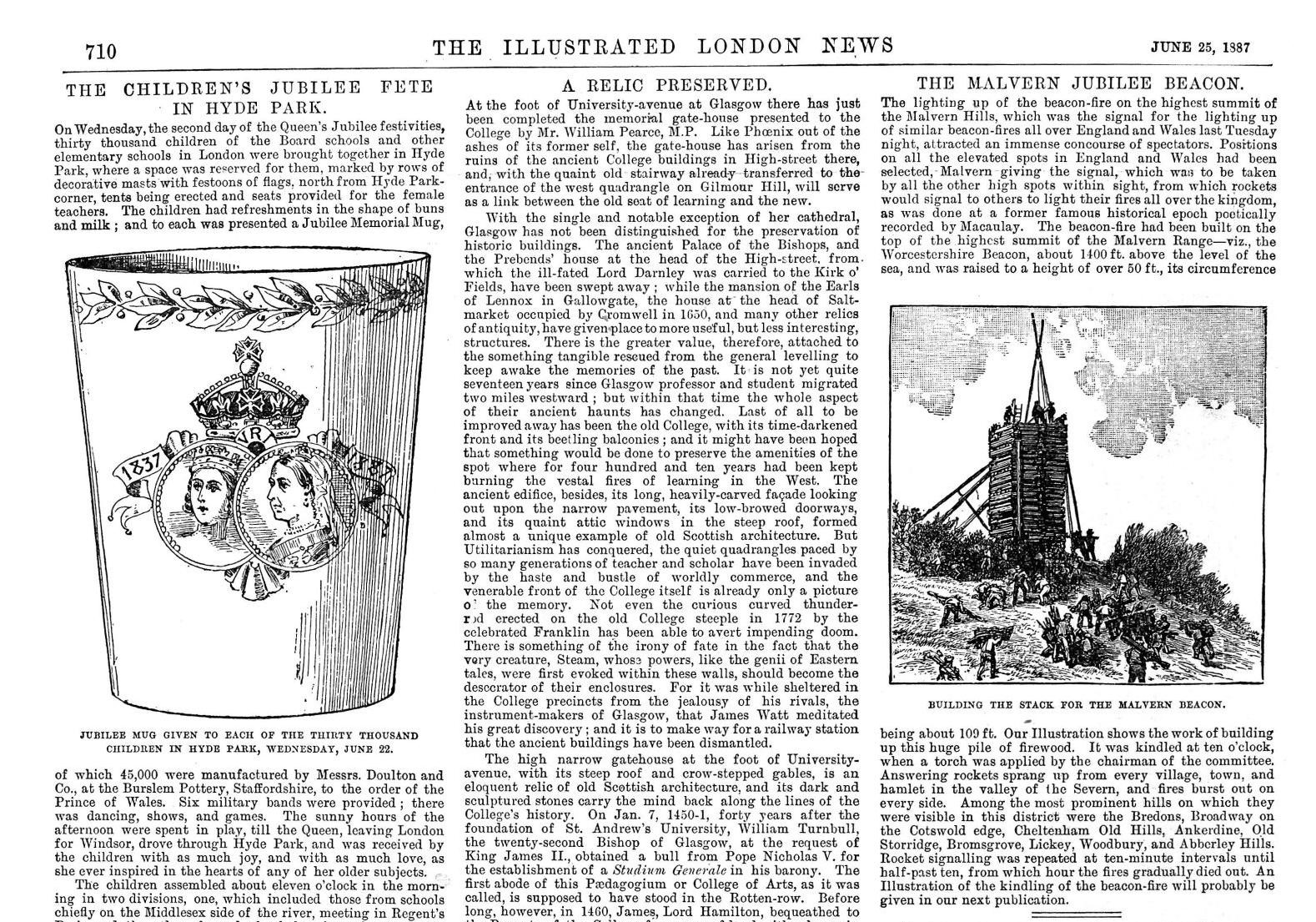 It is also interesting to see that the Victorian memorabilia in the form of a Jubilee Mug was very much in mass production. The Illustrated London News reported that each of the thirty thousand children attending a party in Hyde Park were in line to receive a mug. There was also a full-page landscape drawing of the park where all the London school children were gathered and had their buns and milk. We may wonder at how different the expectations for a kid's treat was in Victorian times compared to what children would expect today!

By contrast, according to the Royal.uk website, for the 2022 Platinum Jubilee over sixty thousand people have registered to run Big Jubilee Lunches "with events ranging from world record attempts for the longest street party, to back garden BBQ's and everything in between. Over ten million people across the UK are expected to be joining the celebrations to share friendship, food and fun at Big Jubilee Lunches as part of this nationwide act of community friendship." 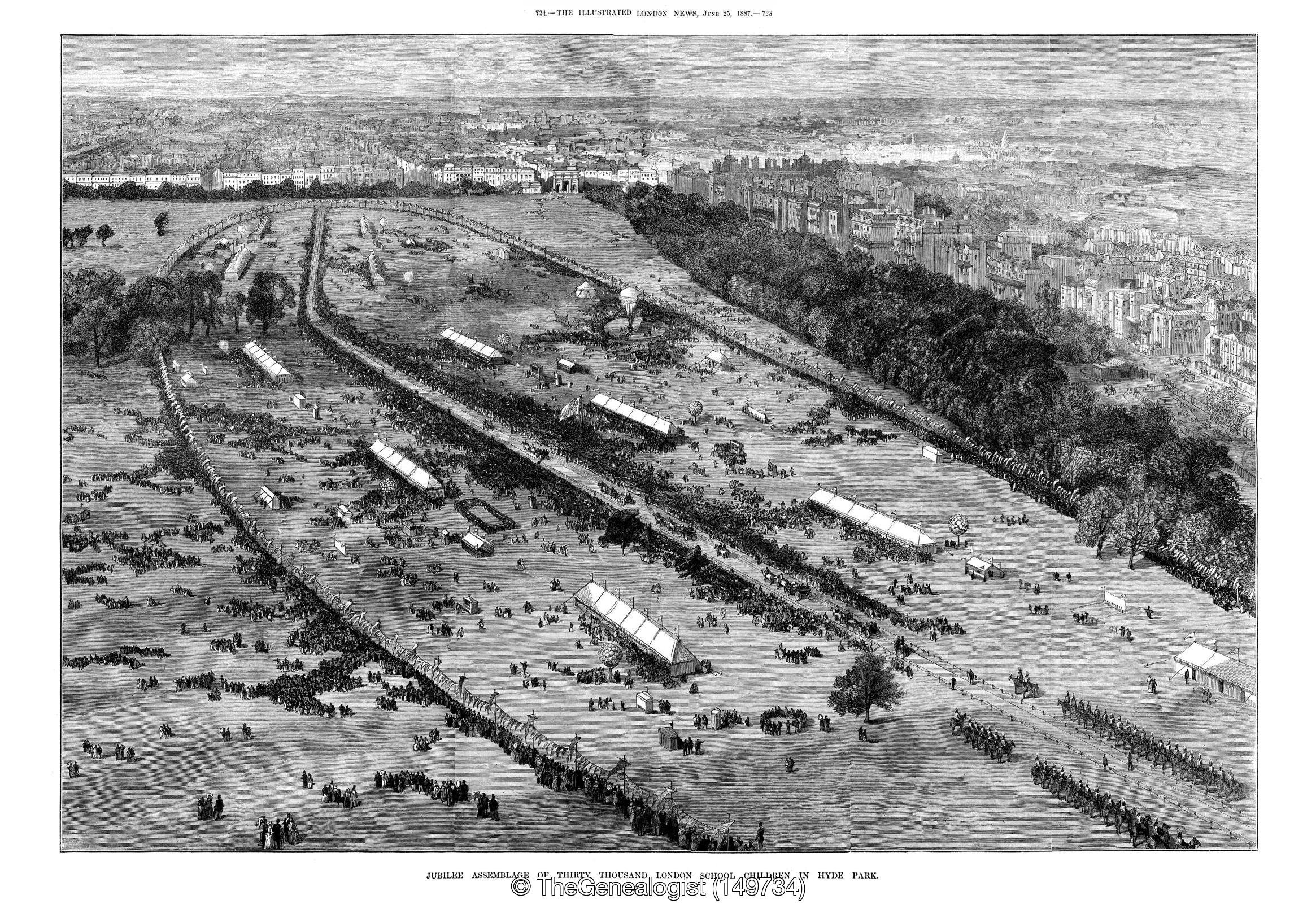 St Paul's versus the Abbey

In 2022 the great and the good are set to take their seats in the pews of St Paul's. If we look back at the records for 1887 there was also a Thanksgiving Service. At that time, rather than Sir Christopher Wren's great Cathedral in the City of London, for Queen Victoria's Golden Jubilee the service was held at Westminster Abbey. The Diamond celebrations ten years later in 1897, however, did involve a ceremony at St Paul's as we can see from looking at The Queen's Reign, one of a number of book resources that can be accessed on TheGenealogist in its Peerage, Gentry & Royalty collection. 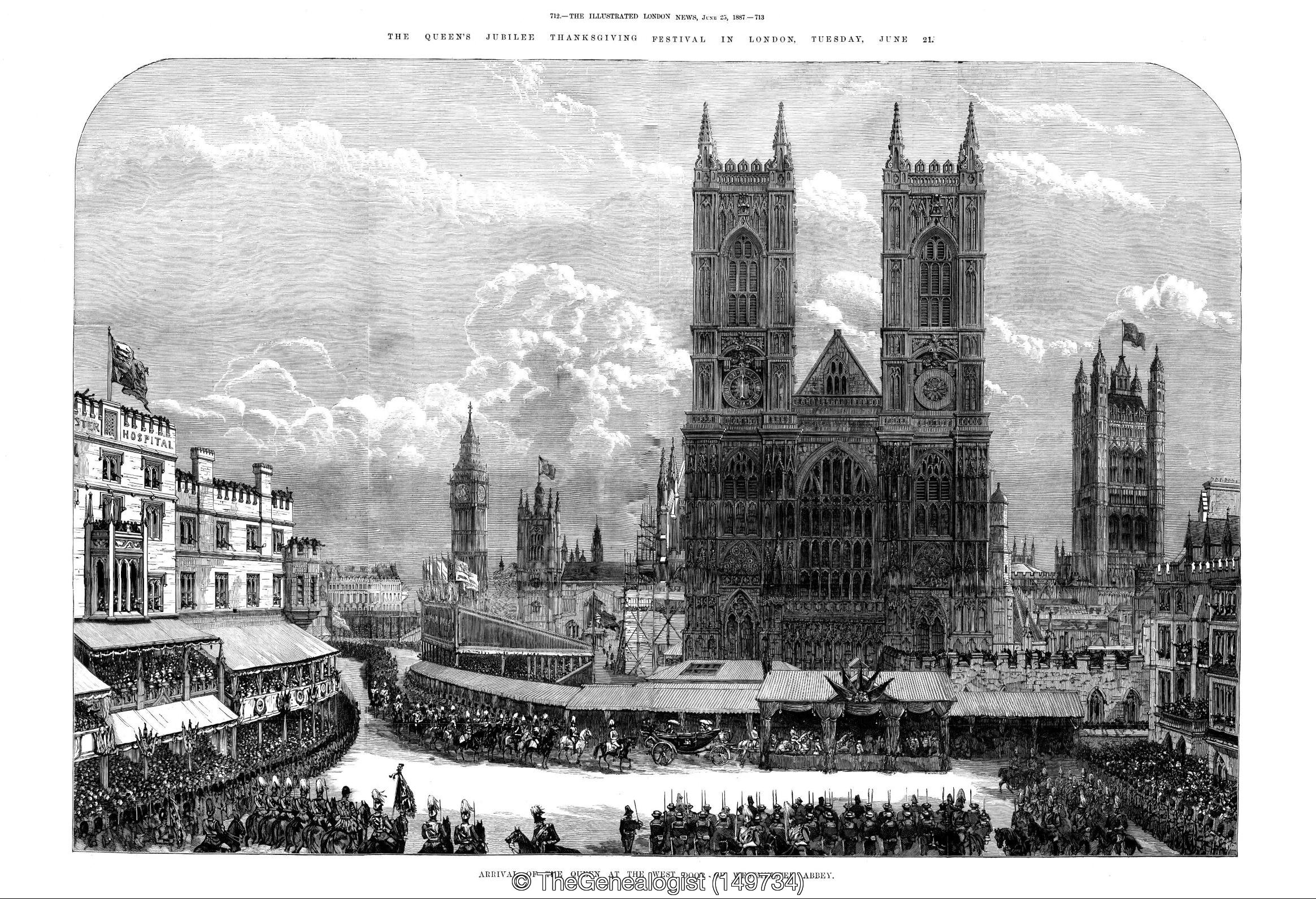 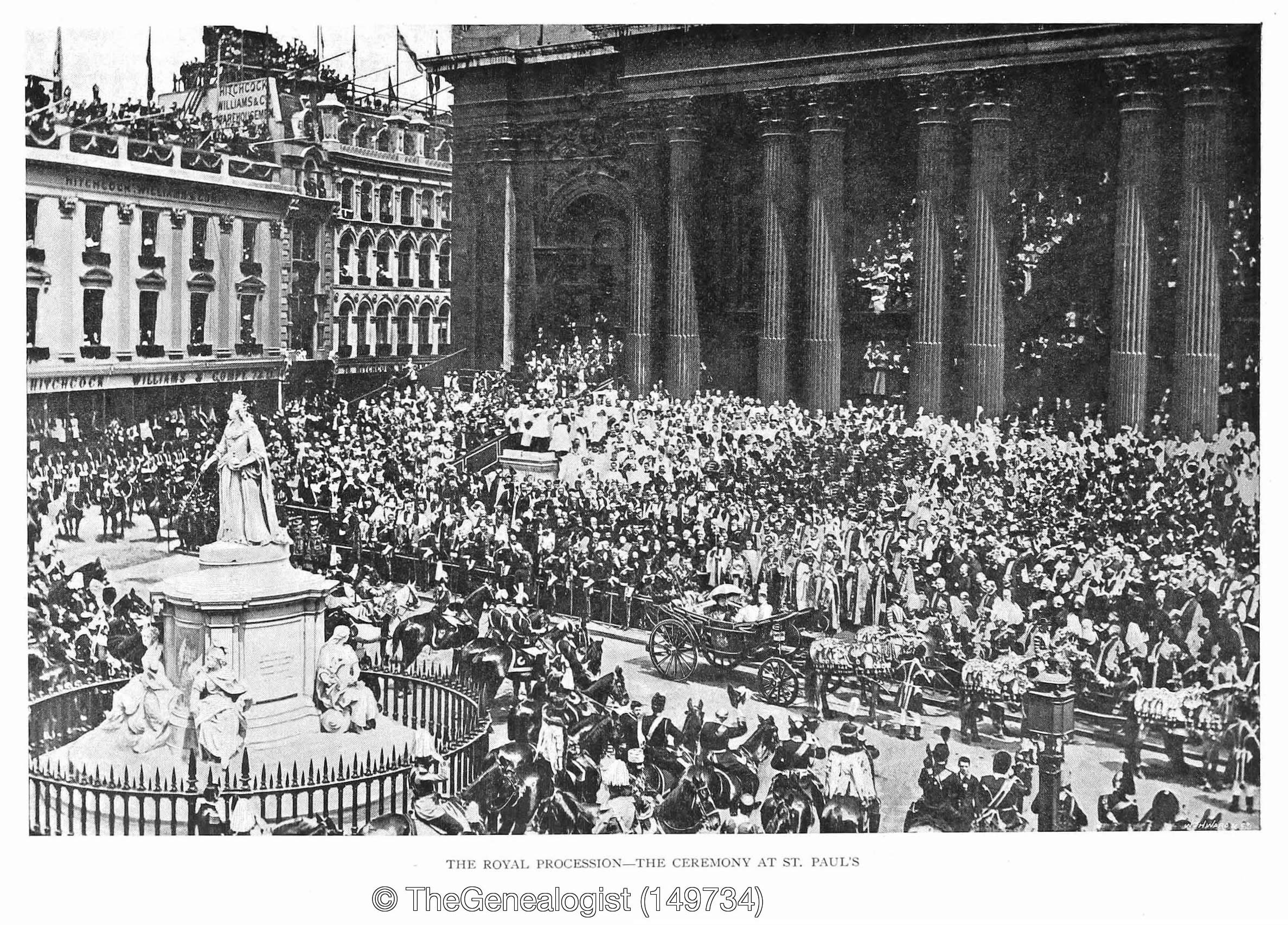 Photograph of the steps to St Paul's 1897 from The Queen's Reign found in the Peerage, Gentry & Royalty Records

At the Platinum Jubilee Service of Thanksgiving on Friday 3rd June we can expect to witness the ringing of Great Paul from the south west tower of the cathedral. This 16 ½ ton bell, the heaviest to be cast in Britain, was forged in the foundry at Loughborough in 1882, but it fell silent in the 1970s due to a broken mechanism. Restored in 2021 it has been rung on 8 occasions since, but this is the 1st royal occasion it will ring out. 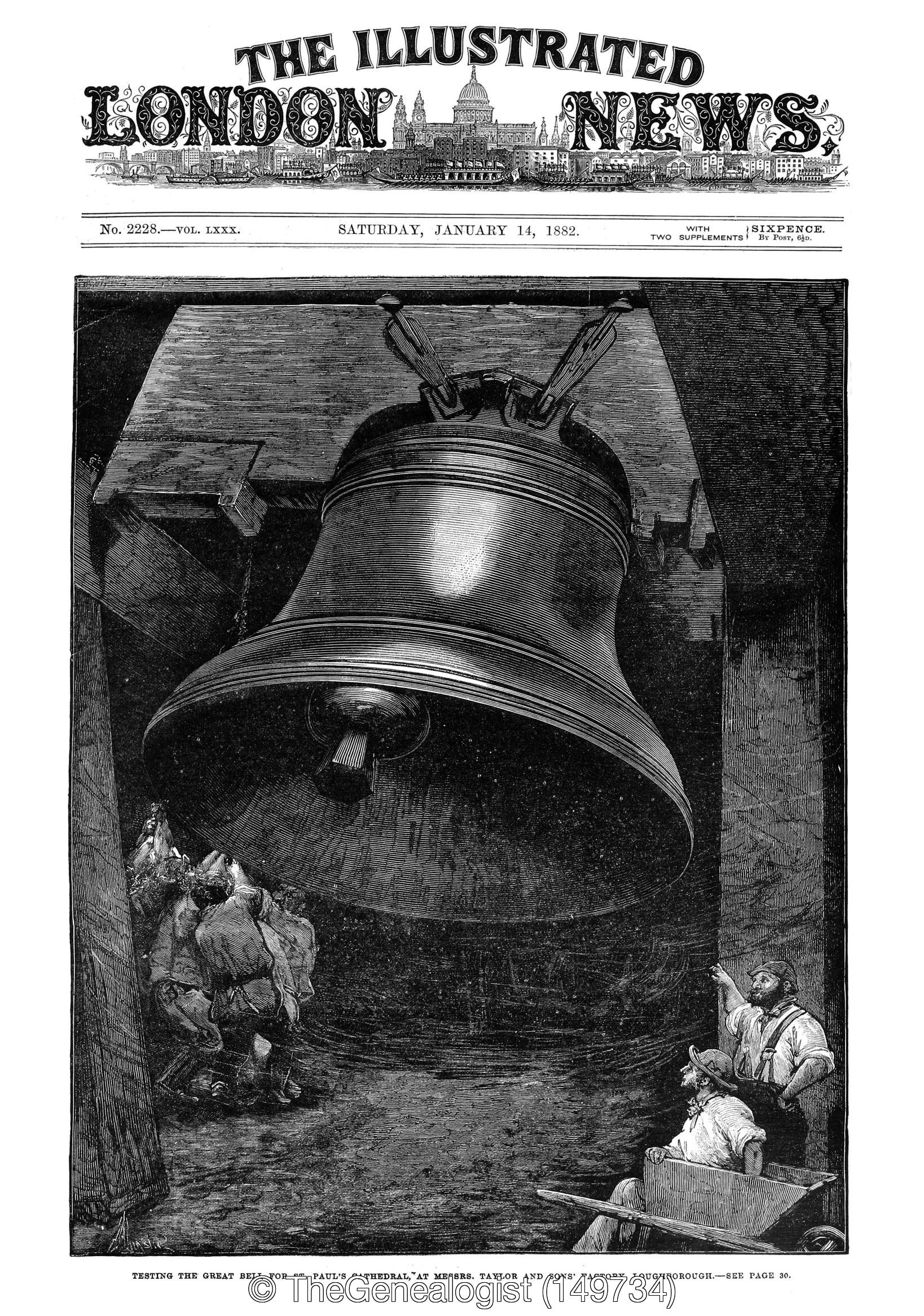 Great Paul was originally cast in Loughborough in 1882, as reported in the Illustrated London News from the Newspapers & Magazines on TheGenealogist

As at this year's Platinum Jubilee, when up and down the country people will be tucking into food at various barbecues and street parties, back in 1887 the people of the nation attended numerous festivities that took place in many of their villages, towns and cities. A glance at the ILN for July 9th, 1887 reveals that a particular favourite of an Ox roast was recorded to have taken place at Driffield in Yorkshire and at Boston, Lincolnshire, but no doubt these were used as mere examples of what was happening all across the land with outdoor community events taking place all over. 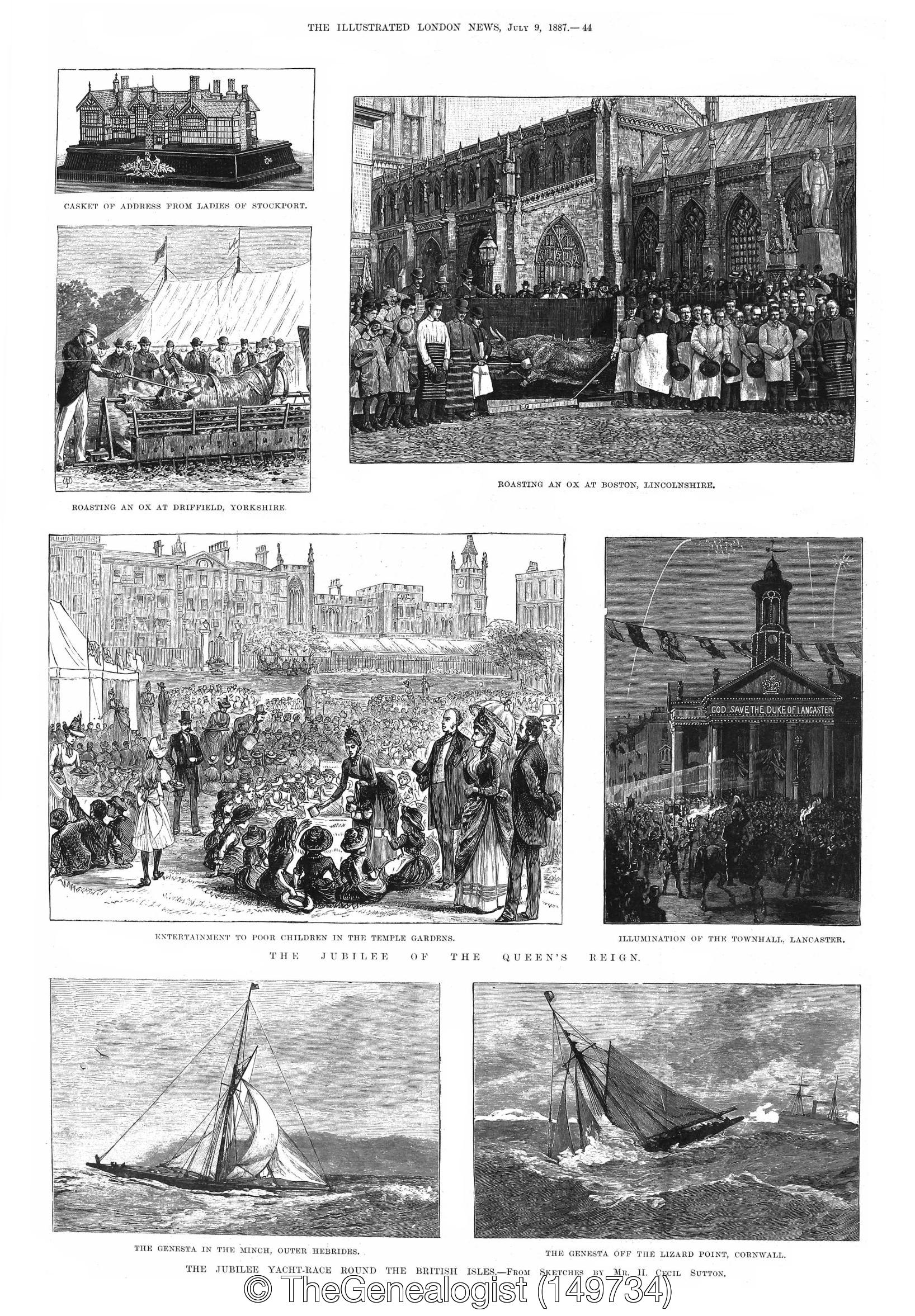 Newspapers and Magazines on TheGenealogist are a wonderful way of adding background to our ancestor's lives to get a feeling for the period in which they lived as the articles are contemporary to their times. You may even be lucky enough to find your ancestor mentioned in an article which can add significantly to your family story. The Newspaper and Magazine collection is available to Diamond subscribers of TheGenealogist to search today.