His first encounter with the enemy would be his last...

Jack Cornwell was only 15 when he joined the Royal Navy as a Boy Seaman and less than a year later he died for his country in heroic circumstances. It was 100 years ago at The Battle of Jutland - a 72-hour clash between the Royal Navy and the Imperial German Navy - that John Travers Cornwell, of His Majesty's Ship Chester, was to have his first and last encounter with the enemy. This ordinary lad from London was the youngest recipient of the Victoria Cross in World War One; the highest military decoration awarded for valour in the face of the enemy. 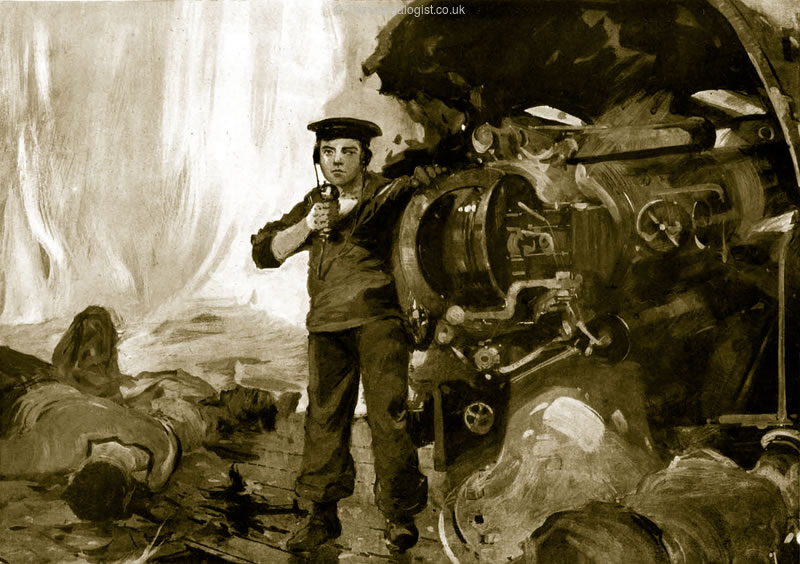 Boy (First Class) J T Cornwell of HMS Chester, though mortally wounded, stands at his post amid the dead and wounded crew. From the Image Archive on TheGenealogist.

On 30 May 1916 the British fleet put out to sea, while the next day the German ships also sailed out into the North Sea. It was 14:00 hours when, off Jutland in Denmark, the two met. The first shots were fired at 14:28 and The Battle of Jutland began.

The Kaiser's ships bombarded the British fleet but after firing just one salvo, HMS Chester was badly damaged. Up front, the forecastle had received a direct hit that killed or wounded every member of Jack Cornwell's gun crew. He was bleeding heavily from a bad injury to his chest where he'd been hit by a jagged shard of searingly hot shrapnel. Though mortally wounded and surrounded by dead and dying comrades, the Boy Seaman First Class put on the headphones and took orders from an officer on the bridge. The 16 year old was faced with setting the gun's sights, and it would depend on his speed and precision as to whether Chester's guns would hit or miss their target. In the hellish conditions of incoming shells and with smoke and death all around him, he remained at his post. When he was found he was barely alive and sadly, two days later, he died.

A search of the records on TheGenealogist finds Jack in the Casualty Lists Records. With a single click we can see an image of the page from The Times, 6th June 1916. 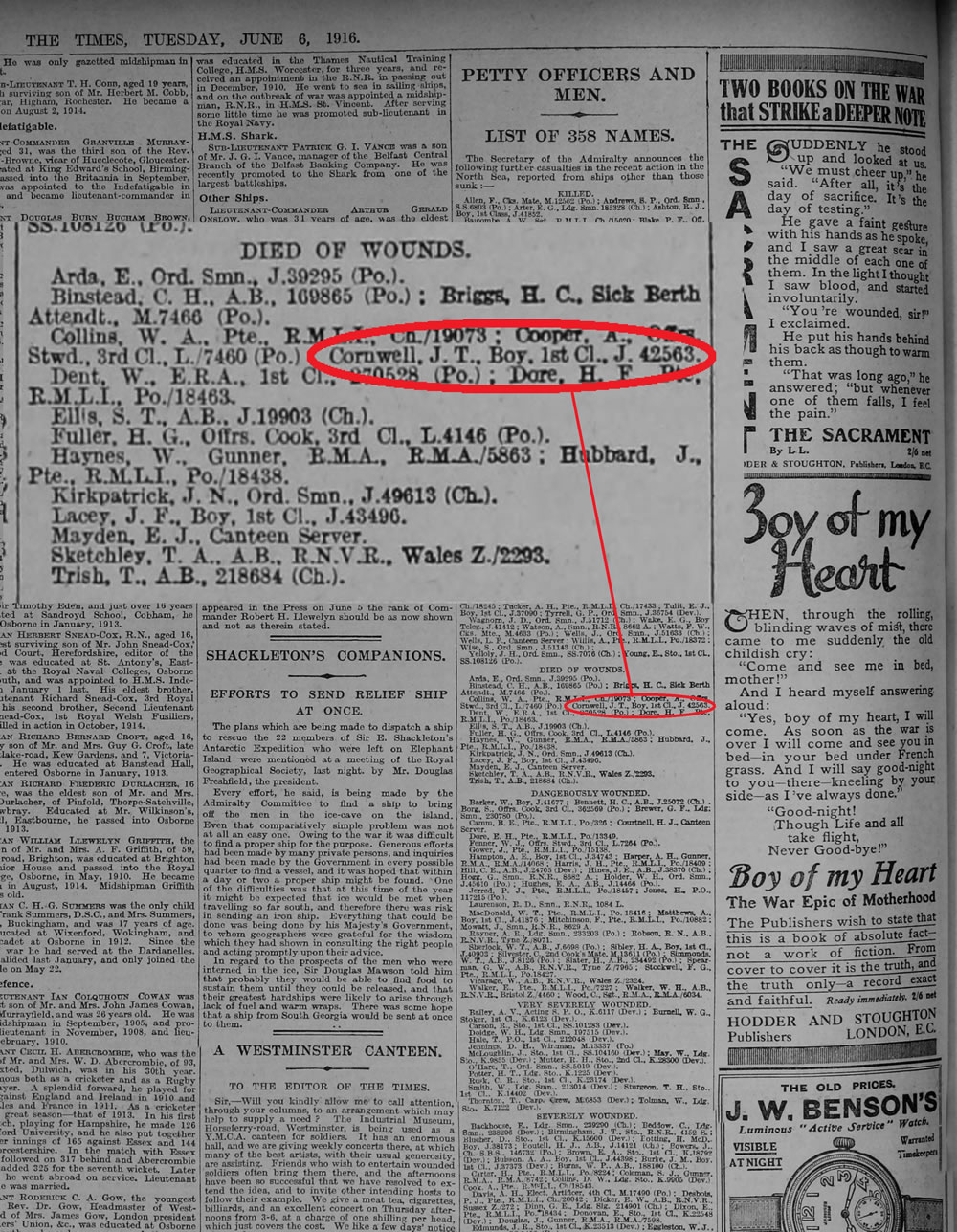 Another record set on TheGenealogist allows us to search for WWI deaths, as reported to the General Register Office, and from the image of the GRO index we see that it even notes his award of the Victoria Cross.

After his death his poor mother was forced, by lack of means, to lay him to rest in a common grave in Ilford. When his story was told by his ship's captain, however, the fact of his humble burial became known and public opinion led to his disinterment from the original grave and reburial with full military honours at Manor Park Cemetery. By searching the Newspapers and Magazines collection on TheGenealogist we are able to find various reports and pictures of the splendid funeral as his coffin, draped with the flag, makes its way through East Ham. 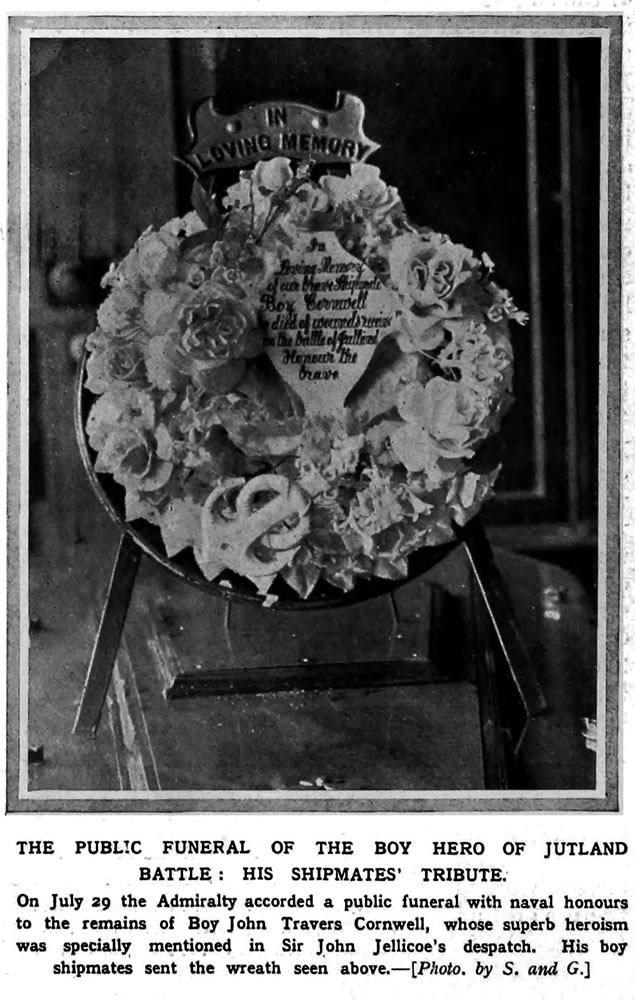 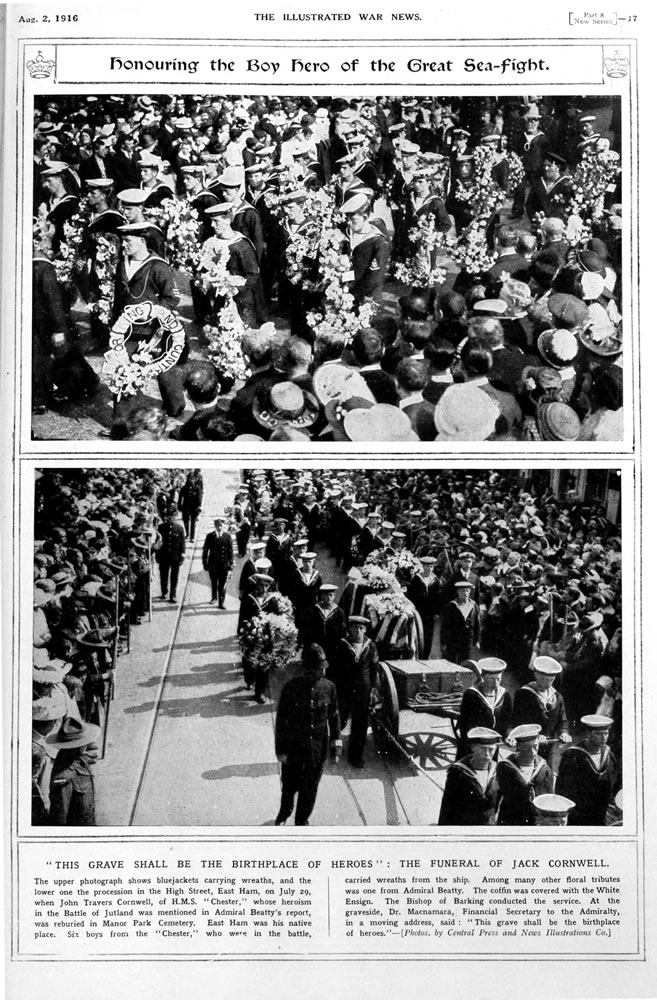 TheGenealogist has a comprehensive Battle of Jutland record set that provides researchers with a full list of the men killed or wounded in the battle with their rank, name of ship and date of death taken from official Admiralty sources. Within these records we can find the brave Boy (1st Class) Cornwell alongside his comrades in arms that died in this battle 100 years ago. It includes the commander of the 1st Cruiser Squadron, Rear Admiral Robert Arbuthnot, who went down with his flagship HMS Defence.

The Battle of Jutland Roll of Honour database at TheGenealogist was initially based upon the Admiralty's Registers of Killed and Wounded (from The National Archives). These were cross-referenced with the Naval Who's Who of 1917 and subsequently the Commonwealth War Graves Commission, along with other records. Where possible the records online are cross-referenced to entries at the CWGC's website, as with other Roll of Honour records at TheGenealogist. This combined database is uniquely available on TheGenealogist.

Although the Royal Navy succumbed to heavy losses in the fight, it remained a major fighting force and deterrent. So much so that the Kaiser's fleet never put to sea again in such large numbers to challenge British sea superiority.

The records are available to view in the 'Roll of Honour' section of the Military Records Collection at TheGenealogist.