In the recently released records from TheGenealogist (in association with Nuneaton & North Warwickshire Family History Society) we can find the famous novelist, poet, journalist and translator George Eliot - but under her real name of Mary Anne Evans. Born in Nuneaton, and baptised at Chilvers Coton All Saints church in 1819, Mary used the pen name of George Eliot in order to be taken more seriously as a writer.

For the settings of her stories, Mary drew on her Warwickshire childhood and Chilvers Coton became the fictional Shepperton in her novels. The parish church is described in great detail in The Sad Fortunes of the Reverend Amos Barton where Shepperton Church is recognisably that of Chilvers Coton. From a reading of the first lines of this book you will see her describe its 'substantial stone tower...and its intelligent eye, the clock...' 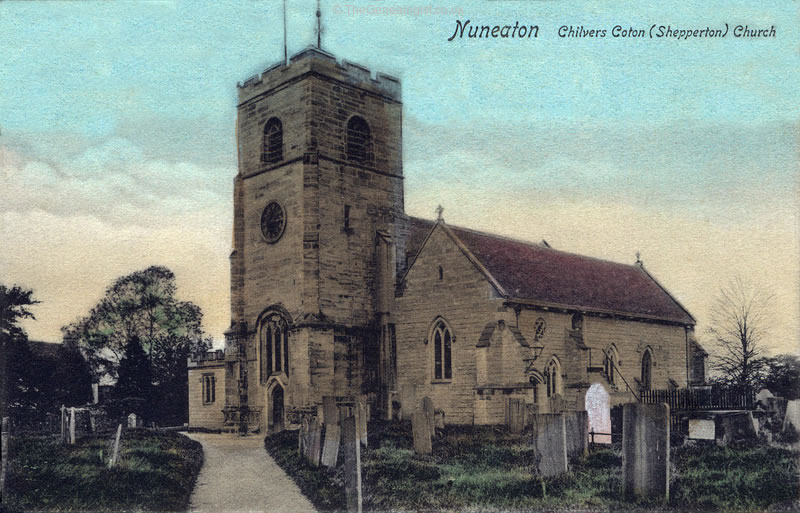 As George Eliot she also used people that she knew from the local area as a basis for her characters; one being the curate that had been there in her childhood. At the time there had been a scandal in Chilvers Coton involving the Rev Gwyther. He had already alienated himself from his parishioners by changing their traditional practices of worship and their choice of hymns for a more Evangelical line. The Reverend was also keen on preaching eternal damnation for sinners - which the inhabitants of the area found at odds with the rumours about his private life. The curate had alledgy become over-friendly with a newcomer to the area, a lady who styled herself as a "Countess". It was further reported that she was also enjoying a close relationship with another older man - although she claimed that this man was her father. The local gossips, however, were unconvinced and had him down as her lover.

The author must have become intrigued by the curate as she would later use him as the basis for the lead figure in her novel The Sad Fortunes of the Reverend Amos Barton. It is said that she was forced to eventually apologise to John Gwyther, especially as the fictional Amos Barton bore more than a passing resemblance to the clergyman from Chilvers Coton.

The publication of Mary's books would also cause some alarm among many of the other residents of this area as well. This was especially so when some began to suspect that characters in her novels had been modeled on them - and often in a less than flattering manner.

In the records that have just been released by TheGenealogist in partnership with the Nuneaton & North Warwickshire Family History Society, it is possible to find Isabell Adolphine Gwyther, born in 1834, and Edward James Wilson Gwyther, born in 1837. These two children share a mention in the notes with this set that states: The Rev J Gwyther was Curate of Coton. He and his wife were the originals of "Amos & Milly Barton" in 'Scenes of Clerical Life' by George Eliot, "Milly Barton" was the mother of six young children. 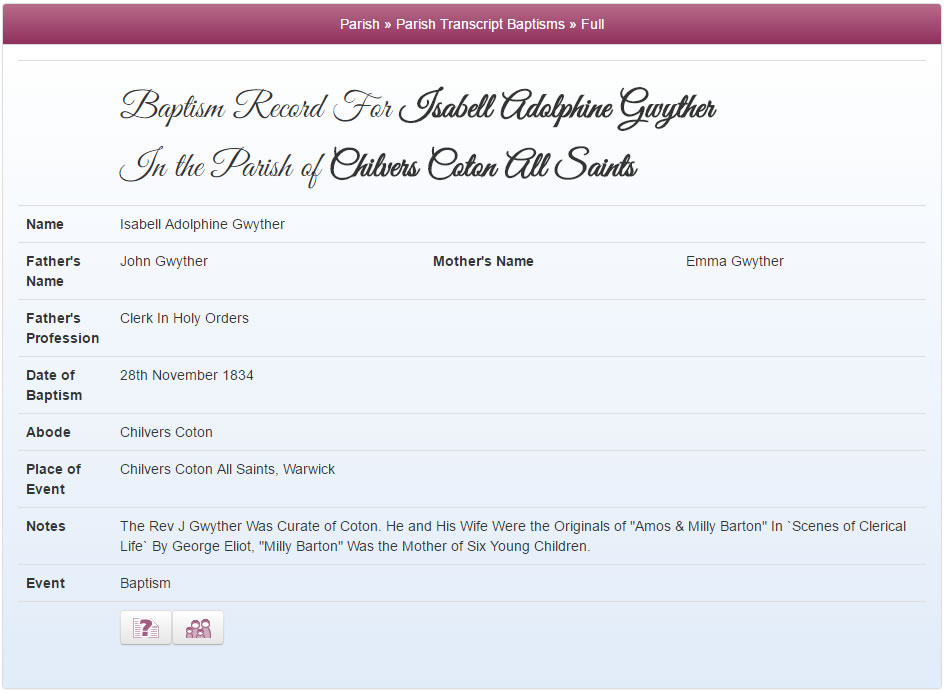 Also to be found in this collection are members of the author's family that she additionally used as inspiration for some of her characters. For example we can find the records for her sister Christiana Evans by looking at the baptismal records in 1814. Here there is a relevant note by the family history society that reveals: Sister of George Eliot. Christiana, 'Chrissie' as she was known to her family, was the original of: 'Celia' in 'Middlemarch' & 'Lucy Deane' in 'The Mill on the Floss'.

If we then search for Mary Anne's sibling, Isaac Pearson Evans who was born in 1816, there is a note which tells us that he was the brother of George Eliot and that he was the basis of Tom Tulliver in "The Mill on the Floss".

Yet another person to be found in these records is a Henry Harper, born 1830, whose mother Anne has the note: Anne Harper - daughter of Rev. Bernard Gilpin and Mrs Ebdell ("Mr Gilfil" and "Caterina") and was the son of "Mr Farquhar - the secondary squire of the parish" in "Scenes of Clerical Life" by George Eliot.

Lastly, by using these parish records we are able to find the death, in 1836, of Christiana Evans who was the mother of the author. 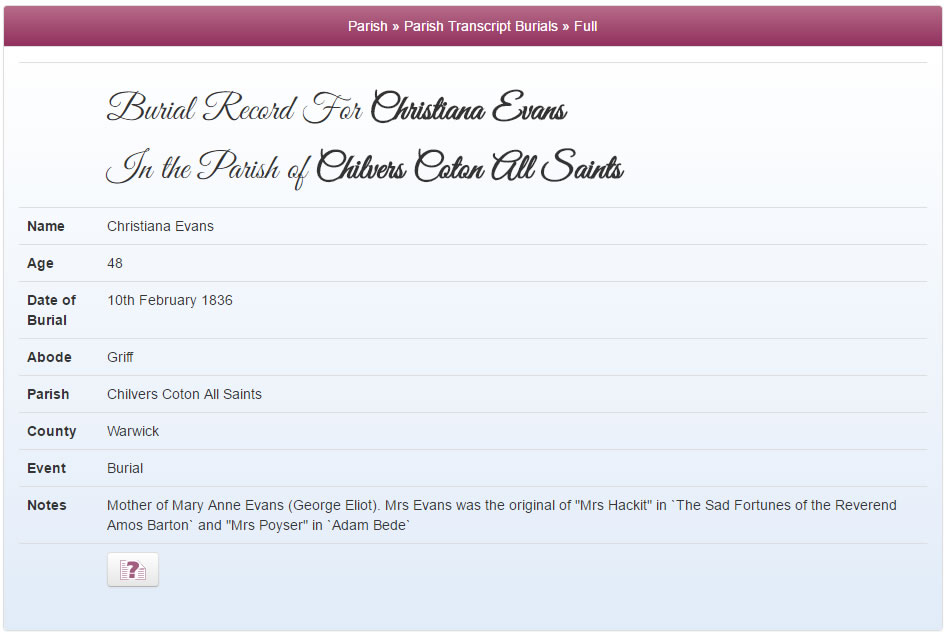 TheGenealogist has a plethora of other useful records that can be used to find out more about ancestors ranging from Residential and Trade directories to Tithe maps and apportionments, while not forgetting the census collection. For example we are able to find Mary's brother Isaac Pearson Evans in the White's Warwickshire 1874 Directory where he is living in the hamlet of Griff in the parish of Chilvers Coton. 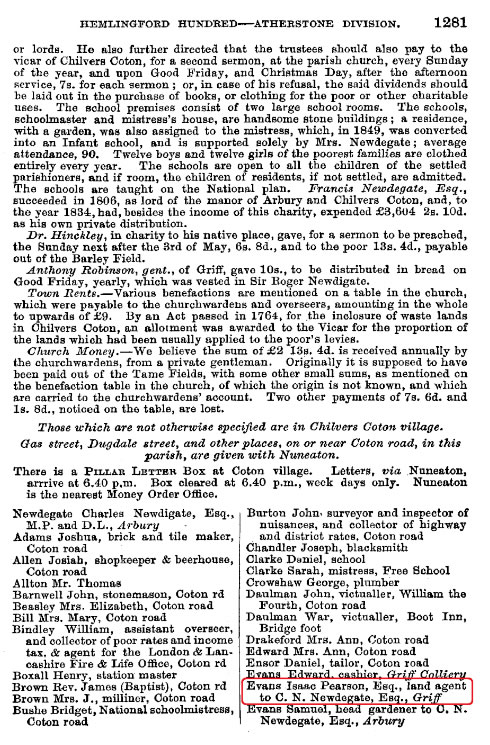 He is the Land agent to C N Newdegate Esq. and we can then use the National Tithe record collection on TheGenealogist to find the land holdings in the area for Isaac's employer. 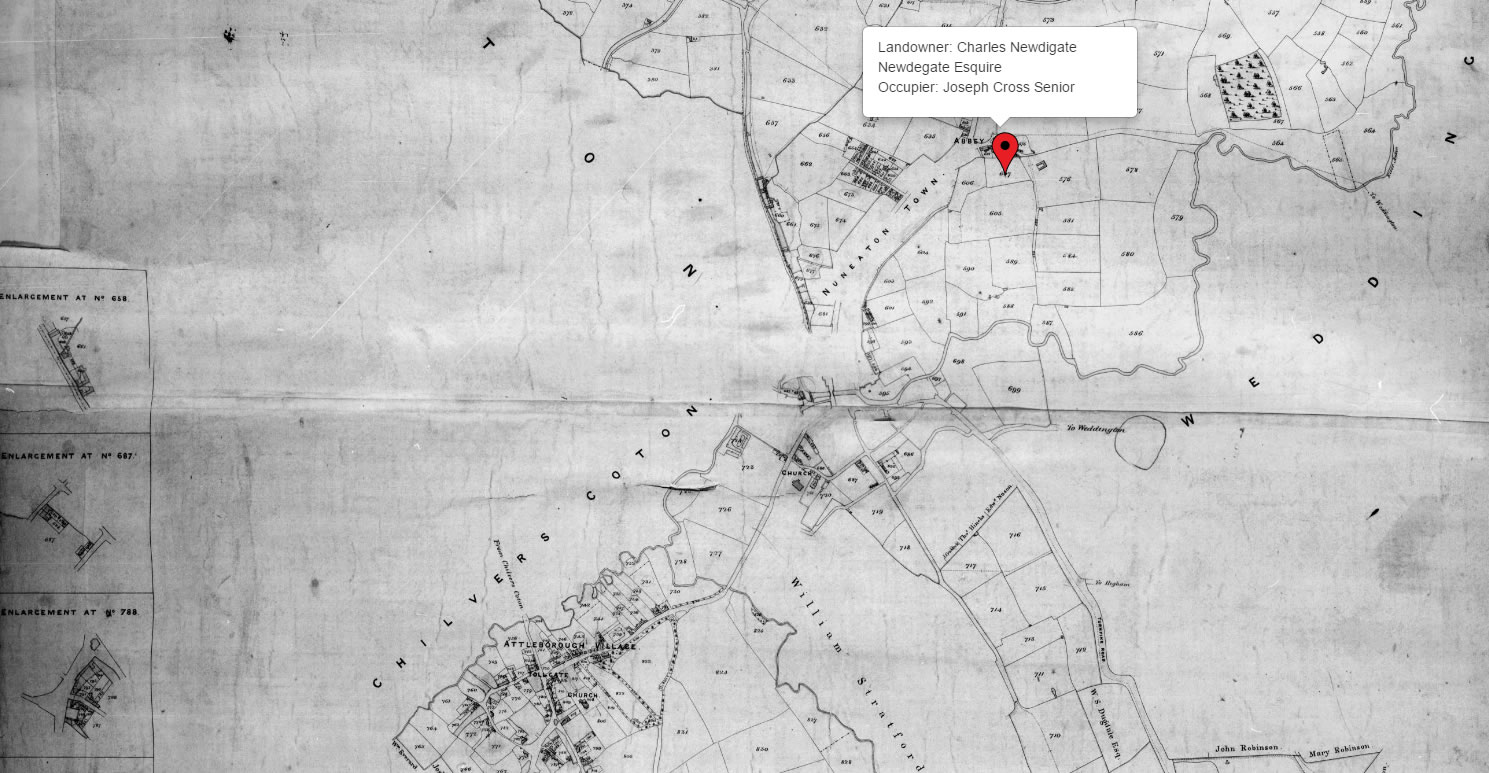 Extract of the Tithe Map of Nuneaton, Warwickshire 1842 at TheGenealogist.co.uk

By using the complementary record sets available on TheGenealogist it is possible to build up a broader picture of our ancestors and so create an interesting family story. In this example we are able to discover more about the actual people that Mary Evans, writing as George Eliot, had used as the basis for her characters in many of her famous and classic novels.