Ricky Tomlinson - Who Do You Think You Are?

"Maybe this is why I have the politics that I've got...That's absolutely scandalous."

Eric Tomlinson was born on the 26 September 1939 in Bispham, Blackpool Lancashire and not Liverpool as a result of his mother being evacuated there due to the bombing of the city in the Second World War. His parents, Albert and Margaret married in 1936 and from consulting the Marriages records on TheGenealogist we see that it was in Liverpool North they wed. 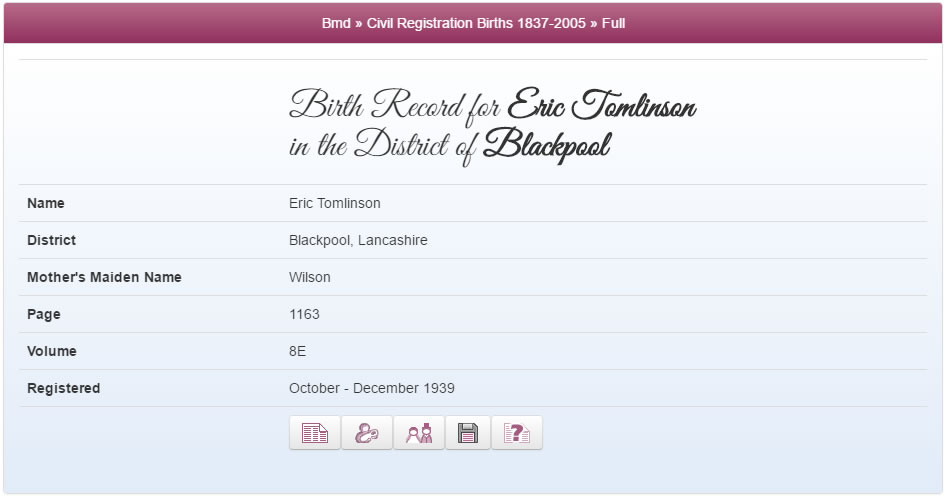 His dad, Albert, died when only 55 and Ricky now says that he should have asked him about his family before it was too late. Not knowing much about his paternal line researchers are able to tell him that his ancestors worked as carters all the way back as far as the 1830s. Using the census records on TheGenealogist finds Ricky's granddad, Richard as a twenty four year old son in the 1911 census for the Everton area of Liverpool where Ricky's great grandfather is revealed to be another Richard Tomlinson. Both of them are employed as carters. 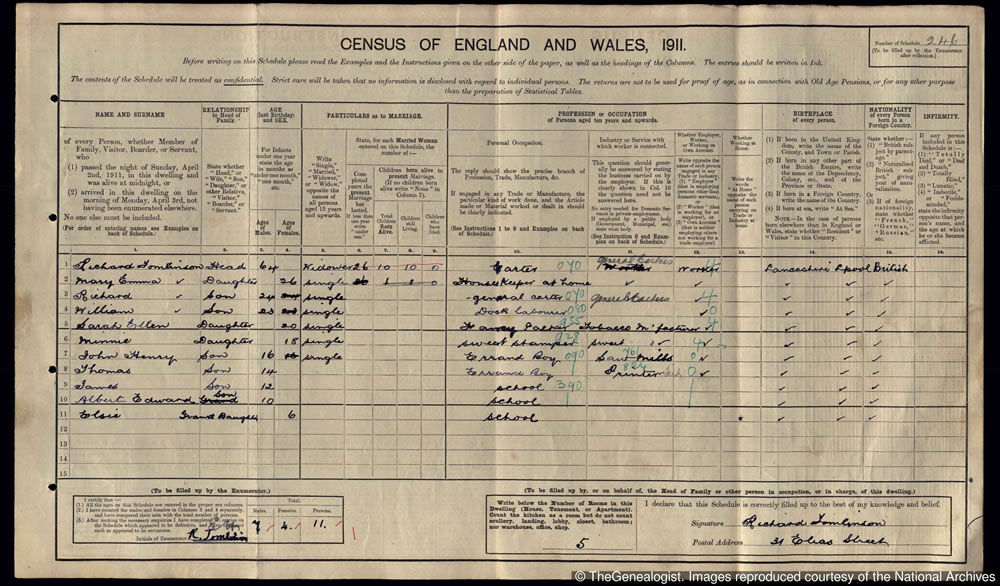 Ricky's dad and great grandparents in the 1911 census for Everton, Liverpool on TheGenealogist

Back a generation and we see in the 1851 census that Ricky's 2x great grandfather was William Tomlinson, who is also a carter and so with this we are establishing a strong link to this occupation by Ricky's ancestors. This is confirmed when researching Ricky's great great great grandfather, also named Richard, discovers that he too was a carter as well. 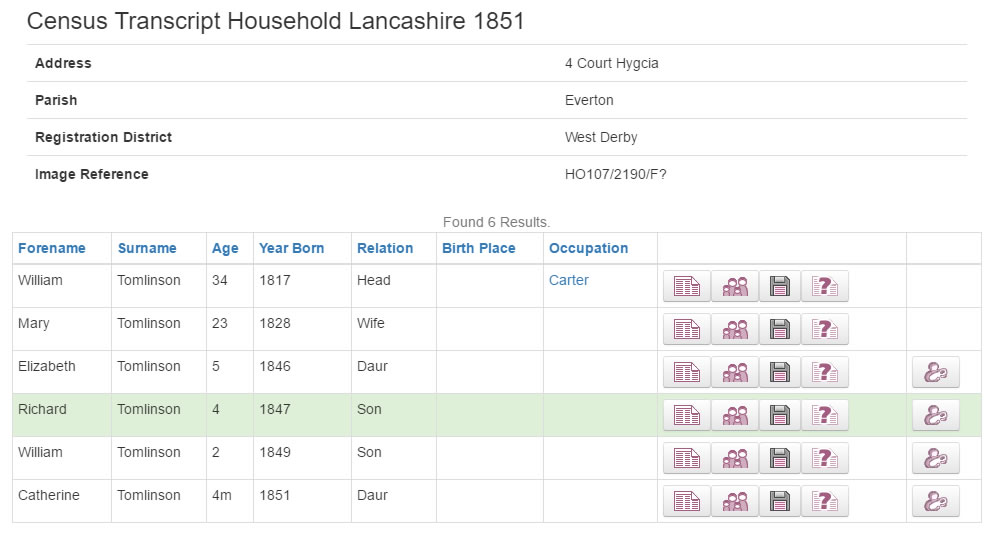 "I'm a grafter, right back in the carting fraternity... I'm not royalty after all... I'd rather be descended from a carter, kid, than from royalty"

"It's opened a magical box for me. I can't wait to see what else is in that box."

Before he became an actor Ricky had once been a union organiser and so he has a deep interest in the working conditions that his ancestors would have had to endure. Ricky was curious to find out what the research could tell him about his ancestor's daily work conditions. In the Who Do You Think You Are? TV show Ricky is given a ride on the type of horse and cart that his forebears would have used in their work around Liverpool's busy port, and gets a feel for what would have been the tough working conditions of the trade. 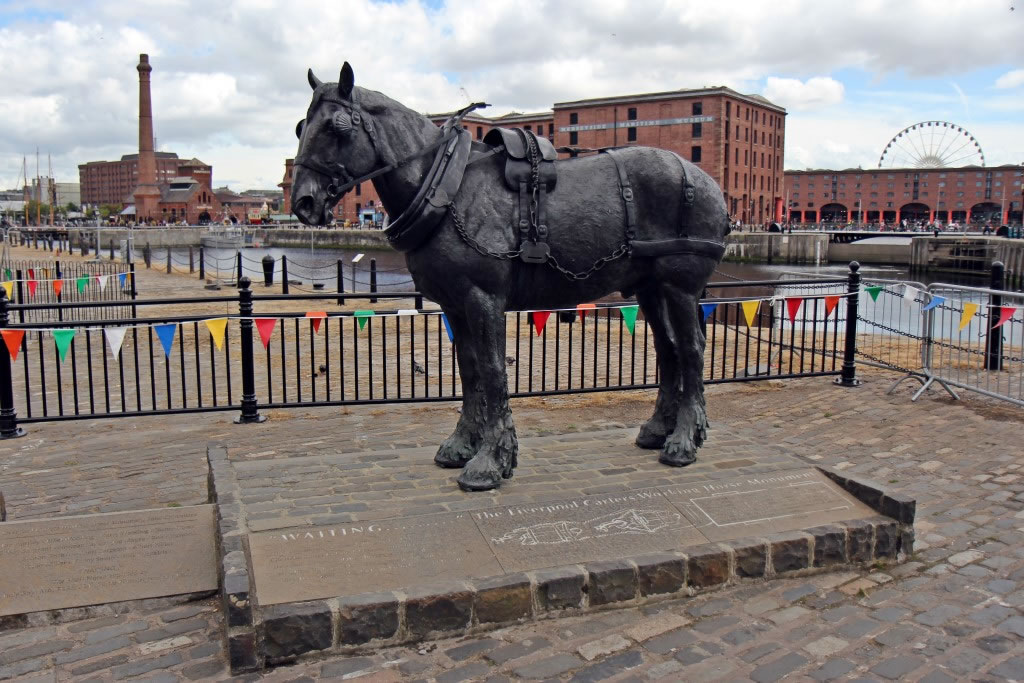 While looking at the dangers of his forebears' work Ricky has a shock. The research reveals that Richard Tomlinson, (3x great grandfather of Ricky) was killed by being crushed to death by one of his own carts in 1839. Unfortunately this was not the only tragedy to be revealed. The investigation turns up the fact that history repeated itself again in 1859 when Richard's son William also died in a similar way. Aged only 40, and in comparable circumstances to his father, William was flattened by his cart and lost his life. Unfortunately this is not all as Ricky's family history story has yet another piece of misfortune to reveal - at the time that William had his deadly accident one of his children was fatally ill. This must have made it particularly tough for Ricky's 2x great grandmother, Mary to cope with at the time.

A dark story begins to emerge when researchers find a newspaper report on the coroner's inquest on William that points to the surgeons at the hospital performing an illegal post-mortem on his dead body. A horrifying tale reveals that Victorian surgeons would, without permission from the deceased's family, often do a post-mortem on a person in order to learn more about the anatomy of the human body.

To top this injustice Ricky is frustrated to be told that, after this treatment, William was then given a pauper's burial and at a time when the city was prospering.

"I'm so angry. They're getting buried in a paupers' grave, with no dignity, with nothing, yet Liverpool is booming, there is loads and loads of money for the few. Maybe this is why I have the politics that I've got...That's absolutely scandalous."

What happens to Mary Tomlinson? In the 1861 census on TheGenealogist she is living at 13 Stewart Buildings, a multi-occupied property - her occupation is sadly reported to be: none. 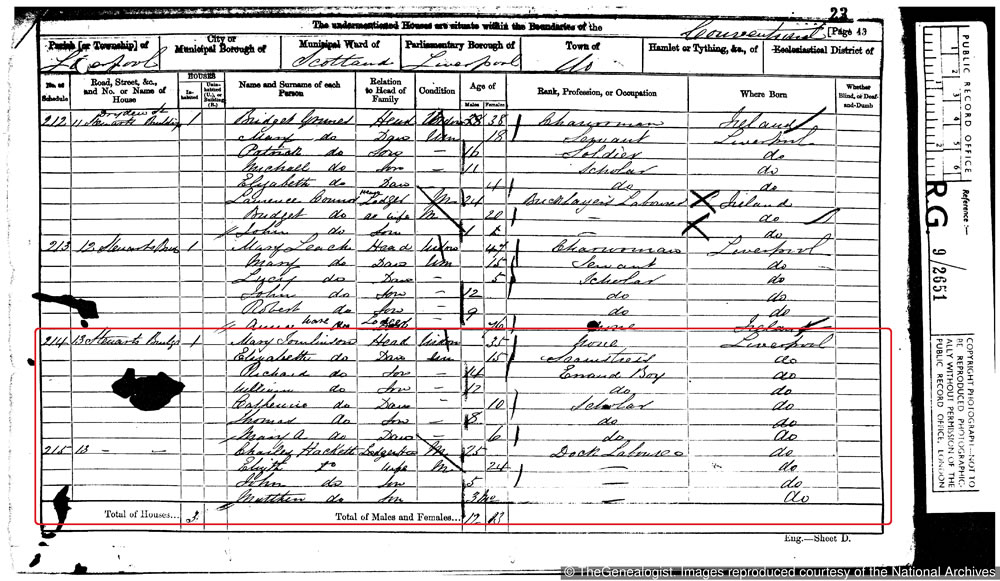 Mary Tomlinson seems to disappear then, but research carried out in Liverpool eventually discovers that Mary had fallen pregnant. This was, of course, Victorian times when the moral code of those who helped the poor would disapprove of such a thing. The programme researchers discover that Mary had married for a second time and her new family and their older half-brothers and sisters did not lose touch with each other. Ricky is impressed:

"My great, great, grandmother has managed to keep the family together somehow, by hook or by crook."