Recipients of the Military Medal are entitled to use the post-nominal letters "MM". Over 117,000 awards were made for actions during the First World War. Additionally, over 5,700 bars were awarded, as well as 180 second bars. There was one instance of a third bar being awarded; this was made to Private Ernest Albert Corey, who served as a stretcher bearer in the Australian 55th Infantry Battalion, on the Western Front.

The MM Collection on TheGenealogist covers those medal recipients in The First World War covering the years from 1914 to 1918. These records are available to Diamond subscribers.

TheGenealogist.co.uk has released over 117,000 new records of Non Commissioned Officer’s and Other Ranks who were awarded the Military Medal in The First World War. Uniquely these new records show details of the Recipients Medal Card with full details combined with a link to The London Gazette which can sometimes contain full details of the heroic deed that won them the medal.

The women who changed attitudes and perceptions of a society with their courageous work on the battlefields of The First World War.

Among the new ‘Military Medals’ collection released by TheGenealogist includes an elite band of women who volunteered for front line duty to save wounded soldiers, putting themselves in mortal danger.

Before (and at the start) of the First World, many were of the fervent opinion that the front line was not the place for a woman. This attitude pervaded the British Army in 1914 and they refused any female volunteers at the front. However, the Belgian Army were glad of the help in 1914 and Dr Hector Munro started the Munro Ambulance Corps with the mission of moving wounded troops from the battlefield to the hospitals in Flanders. His Ambulance Corps contained a number of young women from the wealthier classes of British society eager to assist.

Lady Dorothy had a keen sense of patriotic duty, her brothers and sisters all served in The First World War, she lost 2 of her 3 brothers killed in action. She was keen ‘to do something’ in the war and she joined Hector Munro’s Flying Ambulance Corps. Her bravery and devotion to duty were recognised at a very early stage of the war. The French forces in Belgium officially mentioned her for her work in removing wounded men in Ghent and Dixmude. 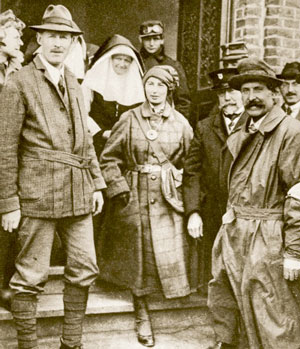 Her gallant work continued and in September 1916, Lady Dorothy became the first Englishwoman to be awarded the Military Medal for bravery in the field. The award was notified in the London Gazette of 1 September 1916. She was decorated with the medal by George V at Windsor Castle on 6 September 1916. 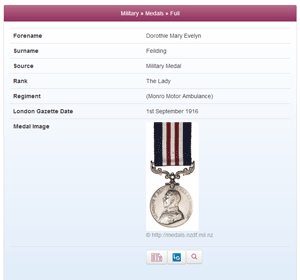 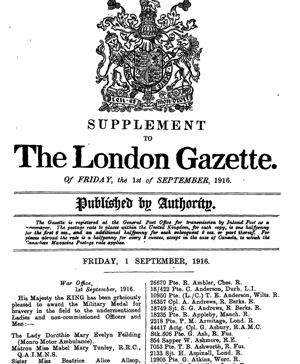 Scottish born Mairi was from an independently wealthy family who also owned a plantation in Trinidad. Using their driving skills as friends in England, they joined the Flying Ambulance Corps and became ambulance drivers. 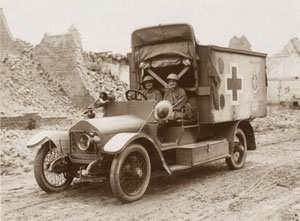 Chisholm and her friend Knocker soon came to the conclusion that they could save more lives by treating the wounded directly on the front lines. In November, they decided to leave the Ambulance Corps and set up their own dressing station five miles east in a town named Pervyse, north of Ypres, just one hundred yards from the trenches.

The two friends engaged in multiple battlefield rescues, even carrying fallen men on their backs to safety. They rescued a wounded German pilot in No-Man’s Land, a feat for which they were both awarded the Military Medal. The image shows the card awarded with Mairi Chisholm’s Military Medal. 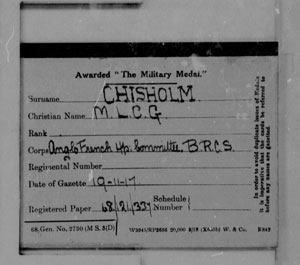 The two became instant celebrities earning the distinction of being the most photographed women of the war. In 1918, both women were badly affected by a massive bombing raid and gas attack on their makeshift field hospital. They were evacuated back to England but Chisholm managed to return to duty before the end of the war. Despite her injuries and ill-health caused by the war, she became a motor racing driver after the war!

After the acknowledged success of the Munro Ambulance Corps, more women became involved in more frontline duties. The First Aid Nursing Yeomanry (FANY) (set up in 1907) was finally allowed to assist the British Army in 1915. Women who volunteered for the Yeomanry had to pay a joining fee and contribute 10 shillings a week for supplies. Some of those stationed in France brought their own cars with them, which were converted into ambulances. During cold weather, the women had to run the engines of the ambulances every hour to prevent them from freezing up.

Initially designed to attract able horsewomen with the romantic idea of riding onto the battlefield, picking up wounded soldiers and bringing them back to safety. In reality, the women drove heavy ambulances but still put themselves in grave amounts of danger.

17 Military Medals were awarded to the First Aid Nursing Yeomanry including when an ammunition dump near the Arques Road was hit by enemy shells and exploded. The women, despite the severe dangers and explosions, succeeded in removing all the wounded and got them to safety.

The F.A.N.Y. also achieved a number of medal recipients in the St Omer evacuations in France in 1918 and other actions in the First World War. Here we see Elizabeth Callander who received her medal for assisting the wounded during a hostile air raid by German aircraft. 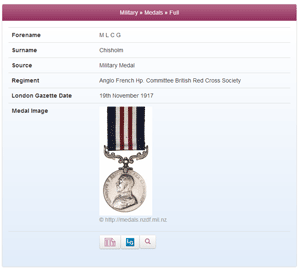 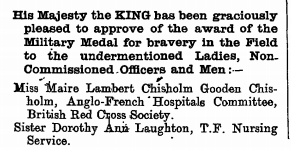 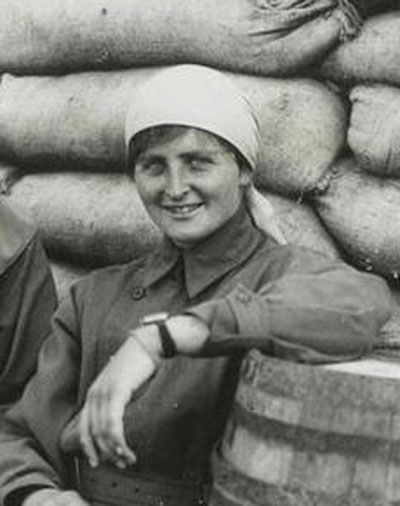 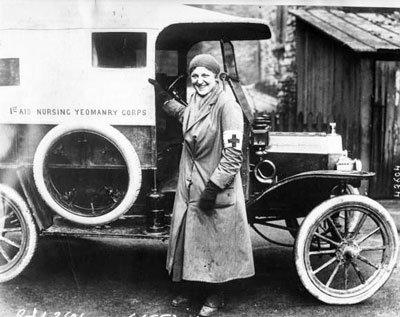